Chinese adults differ from Western European and U.S. adults on how companies should respond to global events, particularly when it comes to Russia’s invasion of Ukraine 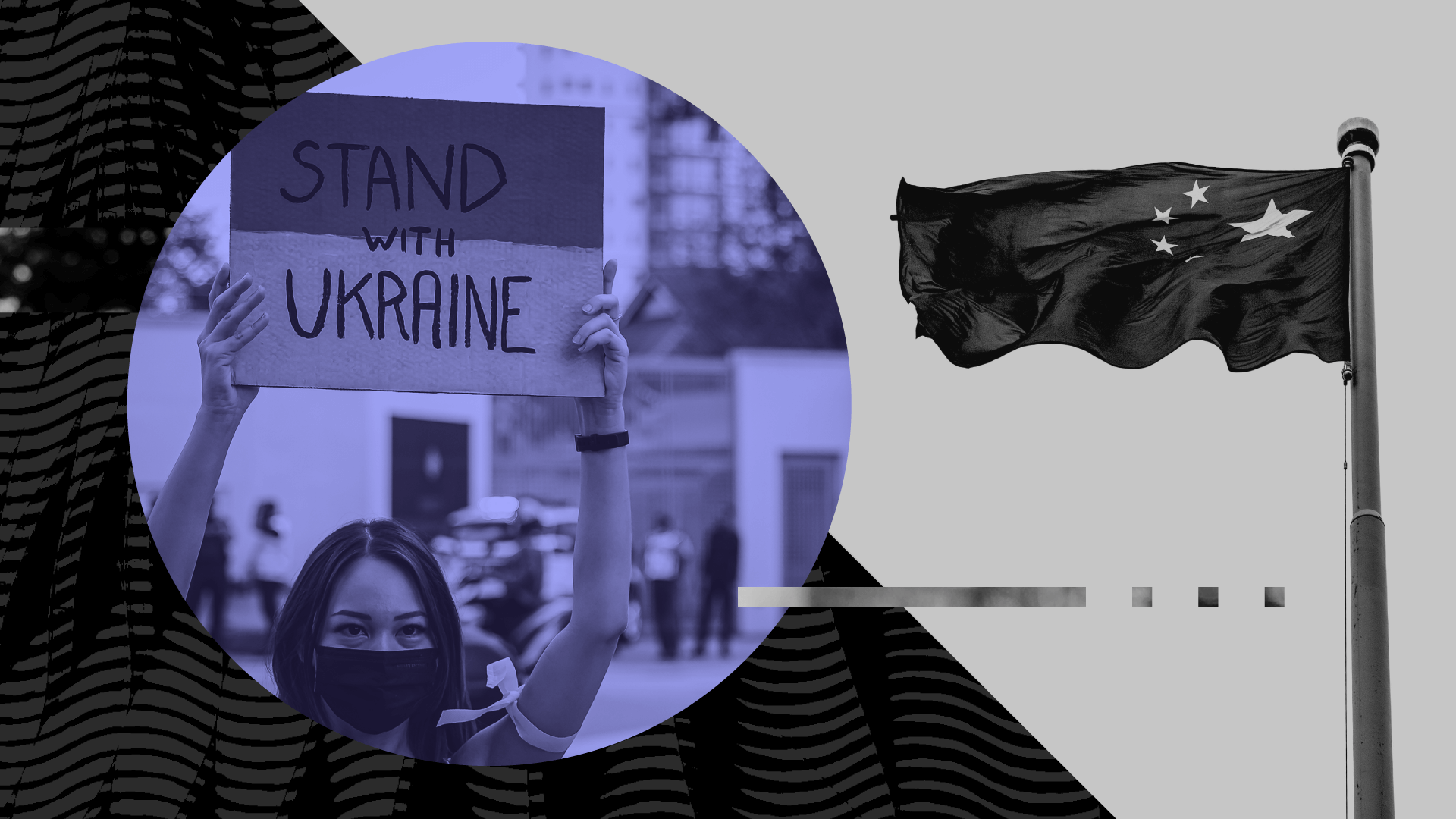 Corporate activism in China is fundamentally different than in Western Europe and North America: Western companies have made high-profile missteps when trying to understand Chinese sentiment around global events. But Chinese companies are not immune to blunders: Earlier this year, ride-hailing company Didi wound up reversing its decision to exit Russia amid public pressure to support the Kremlin during the Ukraine conflict.  At the same time, sanctions and the risk of their continued tightening are making Chinese companies leery of Russian and Ukrainian markets.

Morning Consult asked Chinese, European, and U.S. adults if they thought companies should respond to global events in general, and how they should respond to the Russia-Ukraine crisis in particular. Chinese consumers agree with their Western European and U.S. counterparts that companies should help Ukrainians, but disagree on whether they should penalize Russia for invading Ukraine.

Chinese adults prefer that companies take a principled stand, but they balk at drawing red lines

Chinese consumers are about as likely as Western European and U.S. respondents to say they want companies to react to global events in ways that reflect their customers’ values.

Respondents were asked if they want companies to react to world events in accordance with customers’ values, or to focus on protecting their assets

Surveys conducted April 11-14, 2022, among a representative sample of 998 Chinese adults and March 29-30 among roughly 990 U.K., German and French adults each, with unweighted margins of error of +/- 3 percentage points. Survey conducted March 30-31 among a representative sample of 2,210 U.S. adults, with an unweighted margin of error of +/- 2 percentage points. Figures may not add up to 100% due to rounding.

But when asked what types of events should trigger a principled reaction, fewer Chinese consumers were willing to pinpoint when companies should respond. A plurality of Chinese respondents agreed that a company should take action if a country invaded or conducted cyberattacks on another country, had objectionable environmental policies or violated human rights by condoning the use of forced labor or repressing free speech. However, in most cases, U.S. and Western European adults were more likely to support taking action. The exception is environmental policies, where 43% of both Chinese and U.S. adults said businesses should respond. 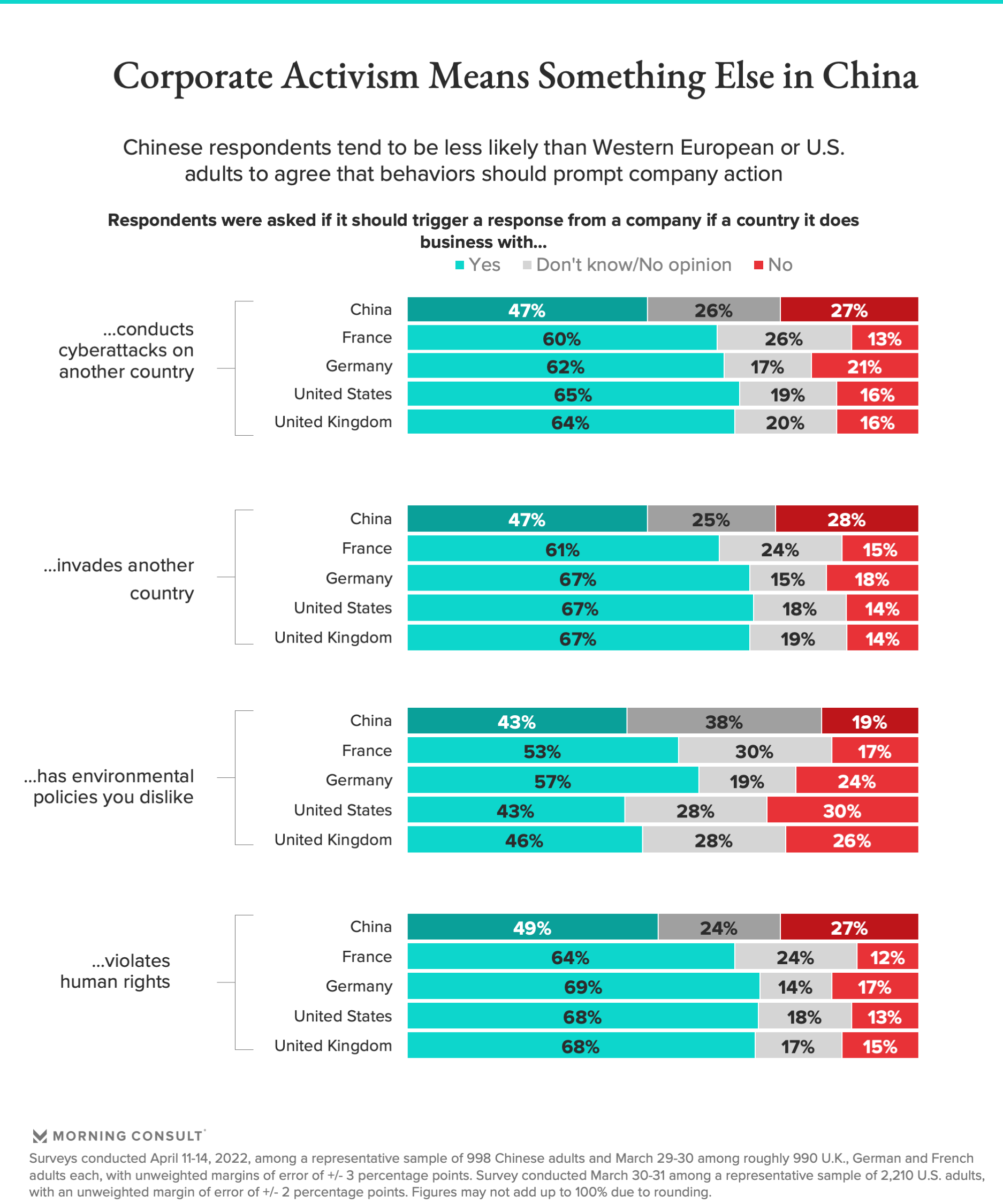 Chinese consumers on the war in Ukraine choose positive over punitive

When it comes to  Russia’s invasion of Ukraine, Chinese consumers diverge from Western Europeans and Americans. In contrast to the latter, Chinese consumers largely favor remaining in Russia, and have a net negative response to public opposition to the war or withdrawal from Russian markets. However, respondents are largely on the same page in supporting humanitarian actions like donating to Ukrainian causes and providing aid to refugees. 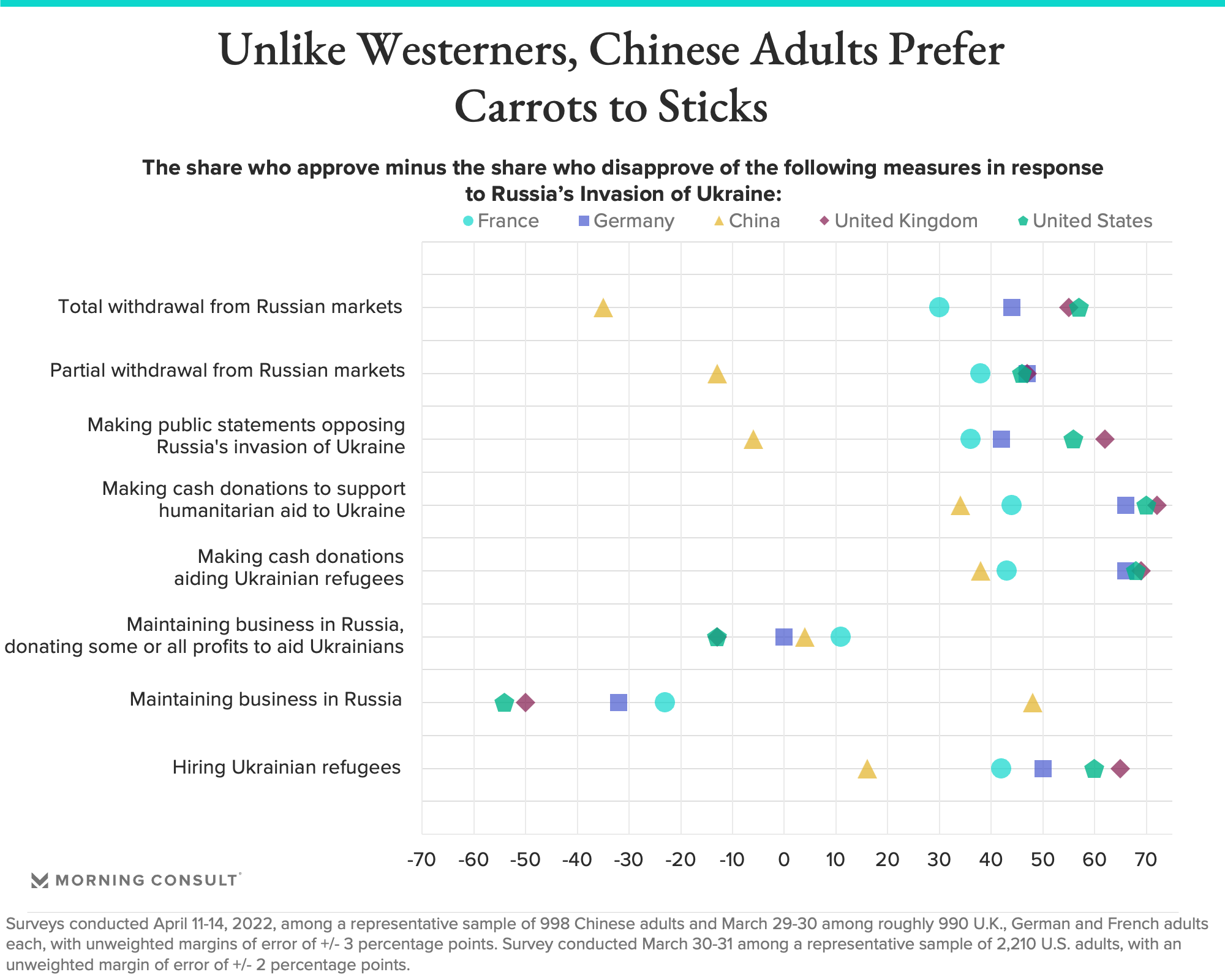 The Chinese reluctance to criticize Russia or encourage companies to withdraw reflects Chinese views of Russia in general, which remain rosy.

Chinese Views of Russia Are Overwhelmingly Positive, in Contrast to Opinions in Europe and the United States

Morning Consult Brand Intelligence interviews about 200 adults per brand or country daily and over 12,000 adults around the globe everyday through multiple online survey panel providers. Interviews are conducted among a representative sample of adults in the world’s emerging and largest economies. This survey was conducted in April 2022.

This result is in line with other data on Chinese views of the conflict from the Carter Center, which shows both high Chinese support for Russia and high support for Chinese involvement in brokering peace.

For multinationals whose investors and customer bases are primarily located in Europe and the United States, the path forward is much clearer: Withdrawal is the safest option both from a compliance and public relations standpoint. Chinese consumers, on the other hand, favor positive actions like humanitarian aid over punitive measures such as withdrawal or public opposition. As the risk of secondary sanctions increases, however, Chinese companies may need to justify drawdowns to a skeptical public. Their best bet is to place a strong focus on the positive actions they are taking to support a resolution to the conflict and assist those affected by the war.