Provider deals have slowed in early 2022, but analysts project a full-year outlook of increased interest from private equity buyers 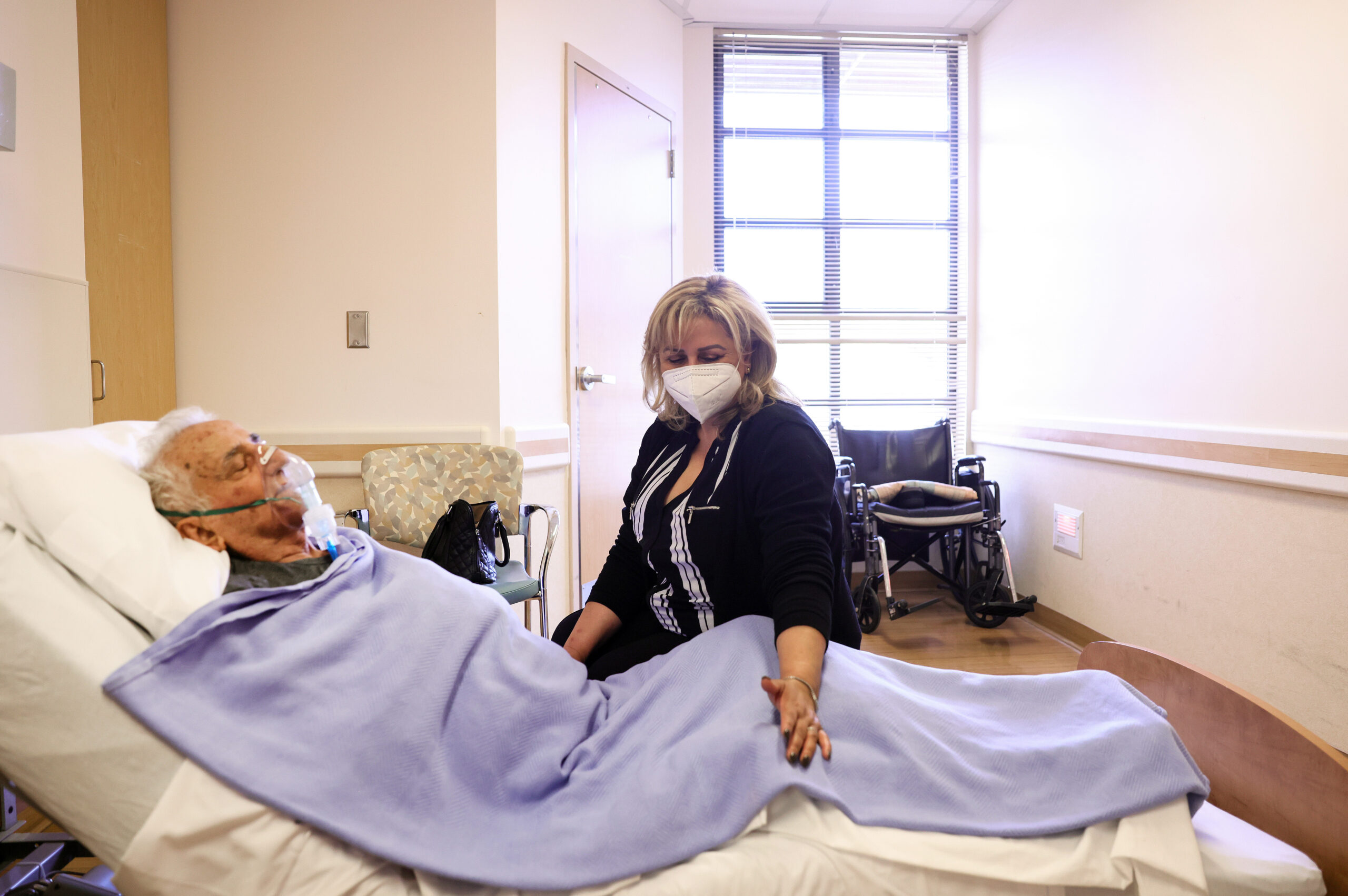 A look at the first day of in-room family member visits at the Ararat Nursing Facility in Los Angeles on March 24, 2021. According to an exclusive analysis by KPMG Advisory Services provided to Morning Consult, there were 1,145 private equity deals involving health systems, physician practices, nursing homes and disability care in 2021. (Mario Tama/Getty Images)
By Gaby Galvin

There were more than 1,000 private equity deals involving health care providers in 2021, a 60% jump in deals over the pre-pandemic level in 2019, according to exclusive data that comes as the Biden administration signals it will take a firmer stance with private equity-backed long-term care.

The new analysis was shared with Morning Consult by KPMG Advisory Services, and uses deal data from PitchBook Data Inc. It shows that the number of private equity deals for health systems, physician practices and nursing homes and disability care climbed steadily over the past decade, as these firms bought up profitable hospitals and invested heavily in lucrative physician specialities like dermatology — but that the pace of these deals may be slowing in 2022.

The landscape has been “mostly marked by the larger organizations doing a lot of aggregation” of integrated health systems, said Ashraf Shehata, a partner at KPMG, as well as “regional players that were highly specialized, or maybe on the long-term care side, more focused on real estate.”

Some years, a few massive deals drove eye-popping totals, the analysis shows. In 2021, private equity investors reported spending $18.3 billion on provider deals, down from a high of $35.1 billion in 2018, when there were multiple “mega deals” made across the health care sector. Those figures are almost certainly underestimates, given the terms of these deals are not always disclosed, but Shehata said they reflect the overall industry trend.

Number of private equity deals for hospitals and health systems, physician practices and nursing homes and disability care, by year

Private equity firms now own roughly 11% of U.S. nursing homes and 4% of hospitals, a federal report found, and these investments have long been controversial. Proponents point to the infusion of cash these firms bring in, upgrading providers with new technology and legal resources, helping them operate more efficiently and bringing them up on regulatory compliance.

Overall, private equity could “either extract value or enhance value” for a health system, said Dr. Anaeze C. Offodile II, a physician at the University of Texas MD Anderson Cancer Center who has studied this issue. “As we think about that framing, we have to say, value for whom? Value for the partners, value for the community, for patients, for society at large?”

Despite the surge of private equity provider deals in 2021, the momentum hit a bump early this year, the analysis shows. As of the end of March, there were 171 deals in 2022, down from 255 in the first quarter of 2021 and 216 in the same period in 2020. KPMG pointed to inflation, other economic concerns and the Russia-Ukraine war to explain the slowdown.

“With higher interest rates coming up, that may change the landscape for private equity,” said Dr. Mark Aaron Unruh, an associate professor at Weill Cornell Medicine who has researched the role of private equity in nursing home care.

The lingering effects of the pandemic may also play a role in this space going forward, as providers grapple with staff shortages and shifting patient volumes that affect revenue.

“In most hospitals, labor is the biggest line item and expense,” Offodile said, and compared with other facilities, private equity-acquired hospitals tend to have more beds and fewer staff per patient. But “if staffing issues are a major bottleneck for nursing and everything else, and people are leaving the workforce, it’s unclear if the strategy employed by PE is still applicable today.”

Share of hospitals with the following traits in 2017, on average and by acquisition status:

The Biden administration is another variable. In February, the White House announced plans to establish minimum staffing rules for nursing homes, increase oversight of poor-performing facilities and more — including specifically examining the role of private equity so officials can “inform the public when corporate entities are not serving their residents’ best interests.”

Unruh said he welcomes the Biden administration’s scrutiny of private equity-funded nursing homes — especially given Medicaid is the primary payer for long-term care services across the country.

“Right now it’s a bit of a black box,” Unruh said, with little information available on how federal money is spent in private equity-backed facilities. More transparency around deals could also lead to “increased accountability with inspections, particularly the worst violators,” he said, giving regulators a way to see if prospective buyers have a history of safety violations or other red flags.

“The agencies that oversee these transactions should have access to information,” Unruh said, as should patients and their families.

Meanwhile, the health insurance lobby AHIP called on the Biden administration this week to shed light on private equity firms’ “monopoly power” in emergency services, some specialties and air ambulances.

Yet while federal lawmakers have also repeatedly sought to crack down on private equity in health care, Shehata said “the political momentum may shift in Washington” to other issues given the looming 2022 midterms and stacked legislative agenda before Congress.

He expects private equity interest and investments in health care to pick back up later this year, particularly in the drug industry as well as health tech and analytics. The KPMG analysis shows there were 198 health IT deals in 2021, up from 157 the year before.

As for health care delivery, the shift toward value-based care and the opportunity to consolidate pieces of the chain — like payers and providers, or inpatient and outpatient care — continues to pique investors’ interest. The health insurer Humana Inc., for one, announced plans this week to open about 100 value-based primary care clinics for Medicare patients through a partnership with the private equity firm Welsh, Carson, Anderson & Stowe.

“We believe that demand is still there,” Shehata said, “and there are still financial resources on the sidelines.”