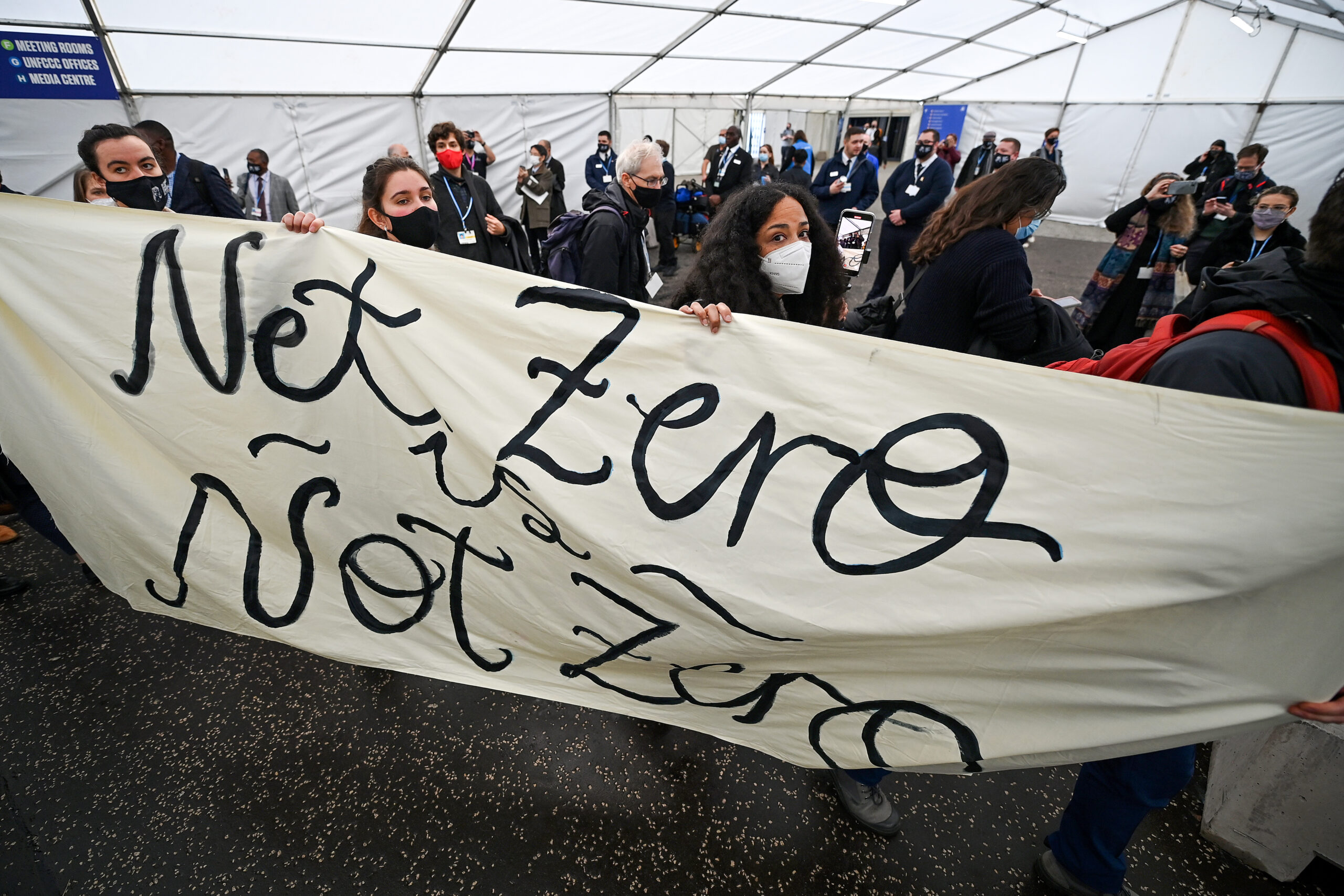 Since before the start of the pandemic, oil and gas companies have faced enormous pressure from environmentalists to adopt stricter emissions reduction targets that are in line with the 2015 Paris Agreement.

However, this past general meeting season showed the complications in enacting tougher climate standards, with shareholders at multiple fossil fuel companies voting against emissions-related resolutions in favor of the companies’ self-implemented targets. In addition, BlackRock Inc. announced that the firm would scale back its support for climate resolutions this year that it deemed too prescriptive, partly because of Russia’s war on Ukraine and its effects on global energy supply.

As activist investment groups and shareholders continue to butt heads on climate resolutions, a new Morning Consult survey indicates that frequent investors are inclined to think that oil and gas companies are already doing their fair share to combat climate change, while the general public is more split on whether the goals are on par or not enough.

Survey conducted May 24-26, 2022, among a representative sample of 2,210 U.S. adults, with an unweighted margin of error of +/- 2 percentage points. Don’t know/No opinion responses are not shown.

The survey shows that 55% of frequent investors believe that oil and gas companies’ current targets to reduce or offset greenhouse-gas emissions from their operations to net zero by 2050 are “just right.” About 1 in 5 frequent investors each said the goals are “too ambitious” or “not ambitious enough.” Frequent investors were respondents who reported investing in or trading stocks, bonds, CDOs, ETFs, mutual funds, real estate, cryptocurrency or commodities “very frequently.”

Meanwhile, 35% of all U.S. adults said the targets are just right, with 32% saying they believe the goals are “not ambitious enough.”

The uptick in resolutions follow revised guidance from the Securities and Exchange Commission in November, which allowed for more types of proposals at annual shareholder meetings that addressed social policy issues such as climate.

Data from As You Sow, a shareholder advocacy nonprofit, showed there have been 145 proposals about the environment filed this year, up from 91 in 2021. On carbon asset risk specifically, 68 of the 101 resolutions filed address emissions, compared to 29 during the same period a year earlier, with many of the proposals filed at companies that have never been asked before about climate change.

“Investor concern about climate change is here to stay, and while the oil industry has made strides recently in setting GHG targets, the quality of those targets varies substantially,” said Andrew Logan, senior director for oil and gas at sustainability nonprofit Ceres. “Expect to see continued investor focus both to raise the standard of what best practice looks like in the sector, and also to raise the floor for companies that so far have escaped scrutiny.”

Some companies that earlier escaped that scrutiny, specifically from Follow This, were U.S.-based, like Exxon and Occidental.

Exxon and Chevron previously successfully blocked the Follow This resolutions from coming to a vote after an appeal to the SEC in 2020, while Occidental blocked the resolution last year and tried to do it again this year, but lost. The appeals mainly focused on “micromanagement” or that the company had already “substantially implemented” targets.

Follow This, a group of about 8,000 shareholders holding oil and gas company stakes in Europe and the United States, began its climate resolution campaign back in 2016 with Shell, at first targeting European majors before setting their sights on U.S. companies.

While the resolutions filed by the group failed this year, Roos Wijker, who leads communications and engagement at Follow This, said they see oil and gas companies responding with slightly better ambitions every time they file a resolution, such as Phillips 66 and Chevron, which adopted Scope 3-related goals in September and October 2021, respectively, following shareholder resolutions filed earlier that year.

Respondents were provided with information about the differences between Scope 1, 2 and 3 emissions, and asked to assess whether oil companies are responsible to reduce the following:

There was a big split based on political leanings, however, with 36% of Republicans saying the companies are liable for all three emission types and 63% of Democrats saying the same. Those figures have held relatively steady since a January survey.

The partisan divide is not too surprising, considering Republican lawmakers’ pushback on “woke” corporate environmental, social and governance policies.

In response to requests for comment after their respective 2022 meetings, Chevron said it appreciated “the focus of our investors and stakeholders on achieving the goals of the Paris Agreement,” while Conoco said the meeting was “another opportunity” to hear what stockholders had to say about the company’s business. And Occidental said the failed resolution “reflects the confidence” that shareholders have in the company’s net-zero strategy and emissions targets. BP pointed to a speech from Chairman Helge Lund to shareholders in which he said the resolution offered “nothing beyond what we are already doing.” Exxon and Shell declined to comment.

Predictably, every oil company that faced a climate resolution issued guidance to vote against it. More surprisingly was that Exxon’s board of directors this year included three new members who were appointed after investment firm Engine No. 1 pushed for replacing Exxon’s members, citing concerns with the company’s decarbonization strategy, among other things.

Despite those three new members, Engine No. 1 did not support the Follow This resolution, with the former’s founder and executive chairman, Christopher James, saying the resulting vote was justified since Scope 3 accounting methods are still uncertain. Engine No. 1 declined to comment, but recently said it had backed 83% of resolutions on environmental, social and governance topics in the United States.

All of these companies have set their own long-term climate targets for 2050, while others have set their sights on shorter-term targets. Logan from Ceres said investor concern has shifted to nearer-term targets, as the next five to 10 years will determine whether the world can truly achieve the 1.5 degree Celsius global warming threshold.

This year’s resolutions were filed under the shadow of the energy crisis brought on by Russia’s invasion of Ukraine. Wijker added that while she remains optimistic that votes in favor of climate resolutions will probably grow in the future, companies this year were able to convince investors that investments in oil and gas would support more energy security, despite the fact that some of those projects would not come to fruition until years from now.

The American Petroleum Institute said it continues “to see a strong interest to invest in our industry for a host of reasons” and that it “will continue to engage with the financial community on energy solutions and ways to reduce GHG emissions.”

Amid record profits, calls for higher taxes on oil companies

Oil and gas companies across the board put up record profit numbers during the first quarter of this year, mainly from higher oil prices due to the Ukraine crisis. Some companies decided to pay down debt, increase their share repurchasing plans, dole out dividends or invest in future drilling development. Most did a combination of all four.

These highly profitable quarters for fossil fuel companies have spurred calls from Democrats to implement new taxes on oil company profits, though it appears to be a hard sell.

Nearly 3 in 5 Democrats believe that fossil fuel companies should pay more in taxes, compared with 1 in 5 Republicans

Survey conducted May 24-26, 2022, among a representative sample of 1,083 U.S. adults, with an unweighted margin of error of +/-3 percentage points. Don’t know/No opinion responses are not shown.

Democrats (58%) are more likely than Republicans (21%) to believe that fossil fuel companies should pay more in taxes, while a 41% plurality of all adults agree.

“At a time like this when clearly things are out of kilter and you’re getting price signals for your products that indicate a strong set of market conditions, you don’t stop doing what you’re doing,” said Rice University’s Dr. Michelle Michot Foss, a fellow in energy, minerals and materials at the school’s Baker Institute for Public Policy.

Michot Foss added that people could “pretty much count on the vocal levels going up when people perceive that prices are high and more cash is coming into the industry from these operations.”

Wijker said that oil and gas companies are “crucial” to reaching the Paris goals, but that investors are still needed “because it’s clear they don’t move on their own accord.” For now, Follow This is eyeing a new wave of resolutions for 2023.