What Would It Take to Boost Electric Vehicle Interest? 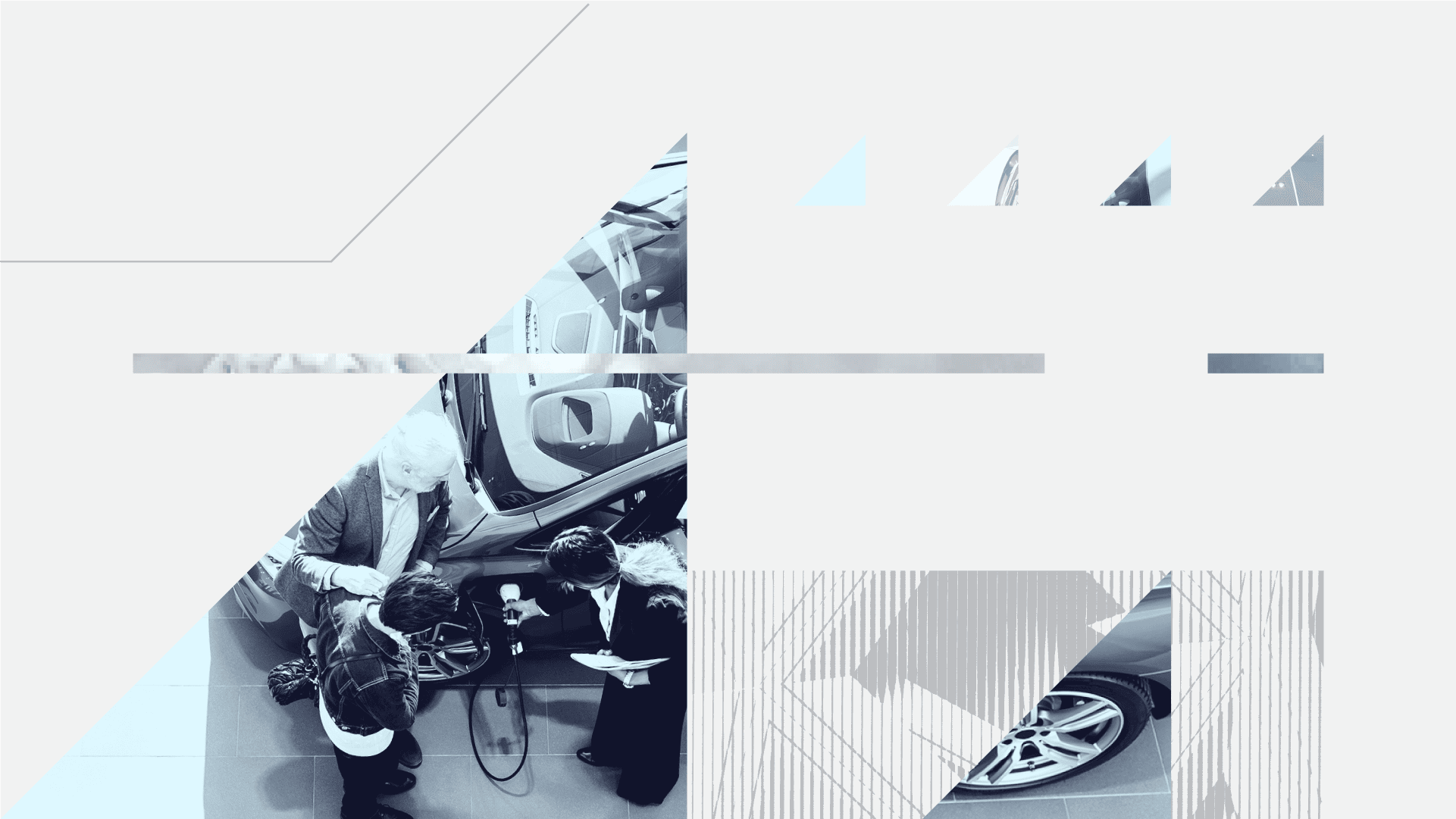 Electric vehicle demand has a long way to go to meet automakers’ aggressive promises to dramatically increase supply over the next several years. Automakers need to acknowledge this potentially wide crevice between future demand and supply and work together to advance the appeal of these vehicles more broadly and rapidly.

Although skyrocketing gas prices have piqued superficial shopping interest and activity around EVs, the needle isn’t moving much regarding actual sales or intent to purchase. Granted, sales grew in the first quarter and are forecasted to rise over 30% in 2022 according to Forbes, but to put it in context, EVs still represent only about 4% of new cars sold last year.

Given that, as of June 2022, only 20% of U.S. adults reported being “very interested” in purchasing an EV within the next five years — a figure that hasn’t budged since the beginning of the year — the present pace of demand will struggle to meet aggressive supply goals in the future. Inflation woes have also crept into this vehicle segment: A whopping 61% of those not interested in purchasing an EV within the next 5 years cited price as a major reason in June, up from 51% in January and providing further headwinds to the pace of demand growth in this sector.

EV manufacturers should continue to focus on pockets of blossoming interest, such as metro centers, while recognizing the massive roadblocks consumers face when considering this charged-up, big-ticket item. But manufacturers also need to dig deeper into overcoming other major obstacles such as range, charging barriers, pricing and a lack of incentives to really understand how entrenched consumers are about their beliefs around EVs.

So: What does it take to bring more consumers along for the journey toward complete electrification?

Range anxiety and fear over lack of infrastructure are EV’s largest roadblocks. Roughly half of U.S. adults who are not interested in purchasing an EV in the next five years cited these concerns as major factors in their decision to steer clear of the vehicle type. 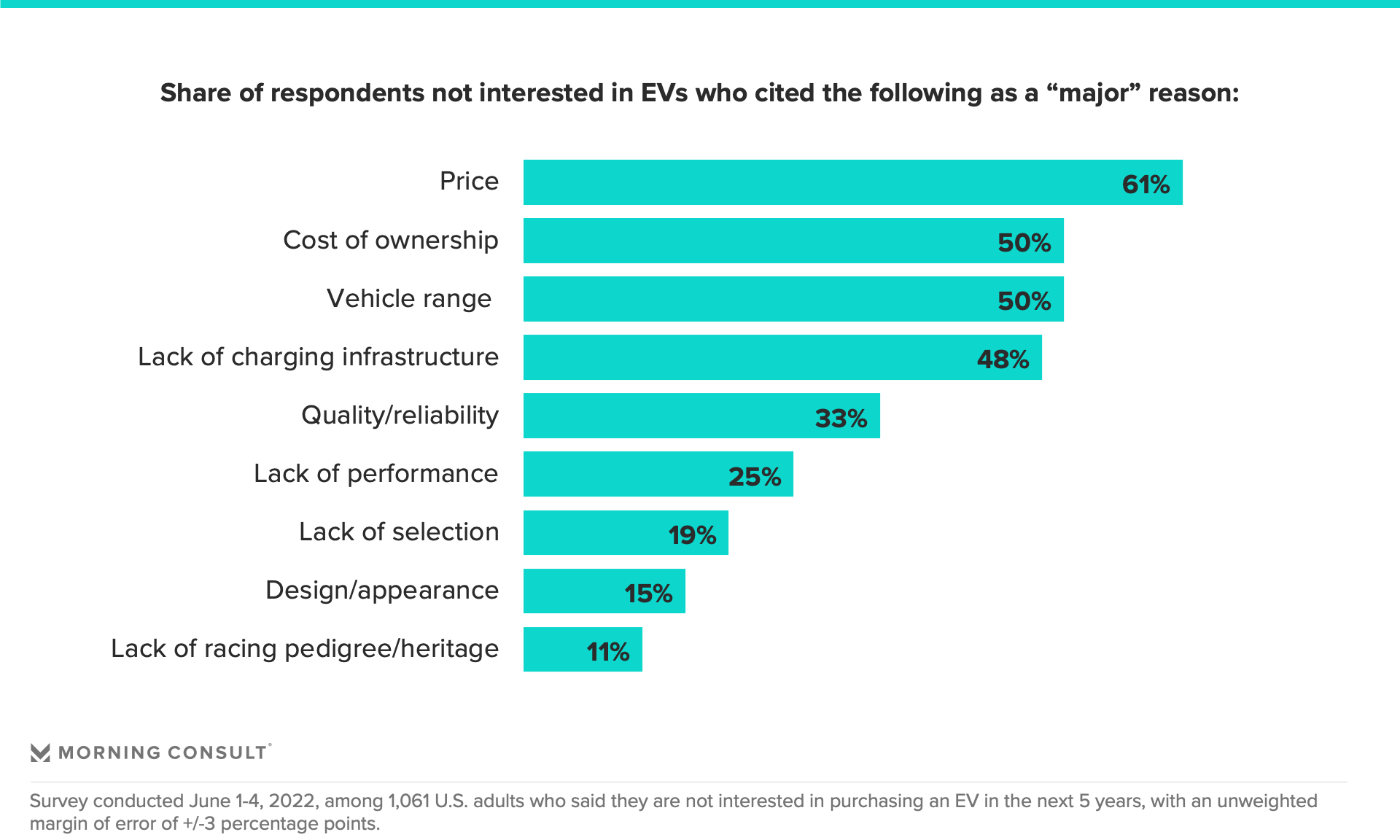 But what if those barriers were removed — especially in light of the current environment of record-shattering gas prices? When consumer attitudes on this issue are compared to January 2021, when economic factors and gas prices were far more stable, it shows that not much has changed regarding views around EVs. 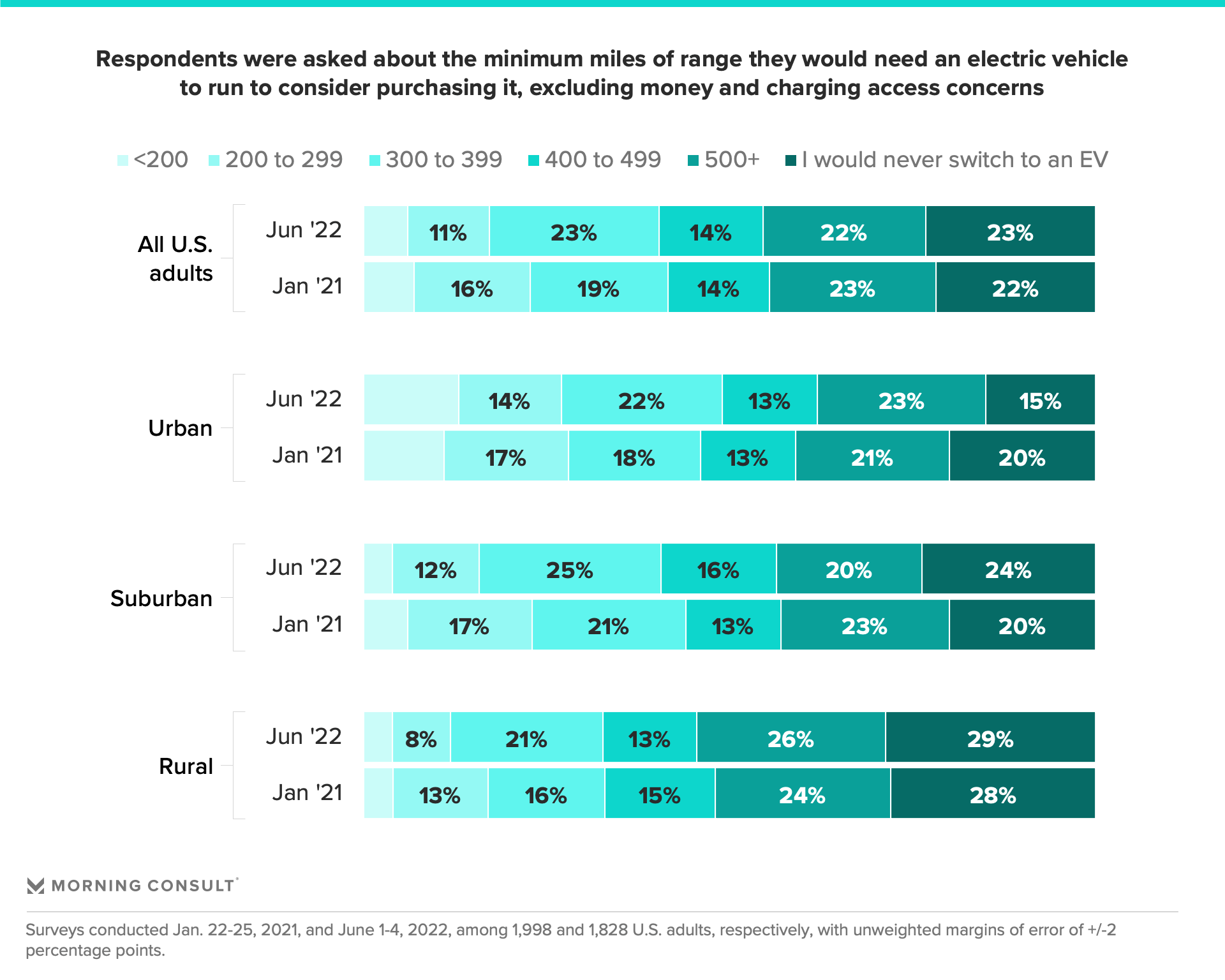 The median range for electric vehicles on the market right now is 234 miles.  But that’s still not close enough to the distance consumers want: 60% of U.S adults need at least 300 miles of range, and the share seeking that desired range threshold has dropped by less than 5 percentage points since January 2021. There has likewise been little movement around those who stated they would never purchase an EV for any reason, from 22% in January 2021 to 23% in June 2022.

Inflation headwinds are also destroying potential purchasing power around electric vehicles, and very few are willing to pay more for EVs, even if the major inconveniences — such as the current significant lack of charging infrastructure — were to be alleviated. 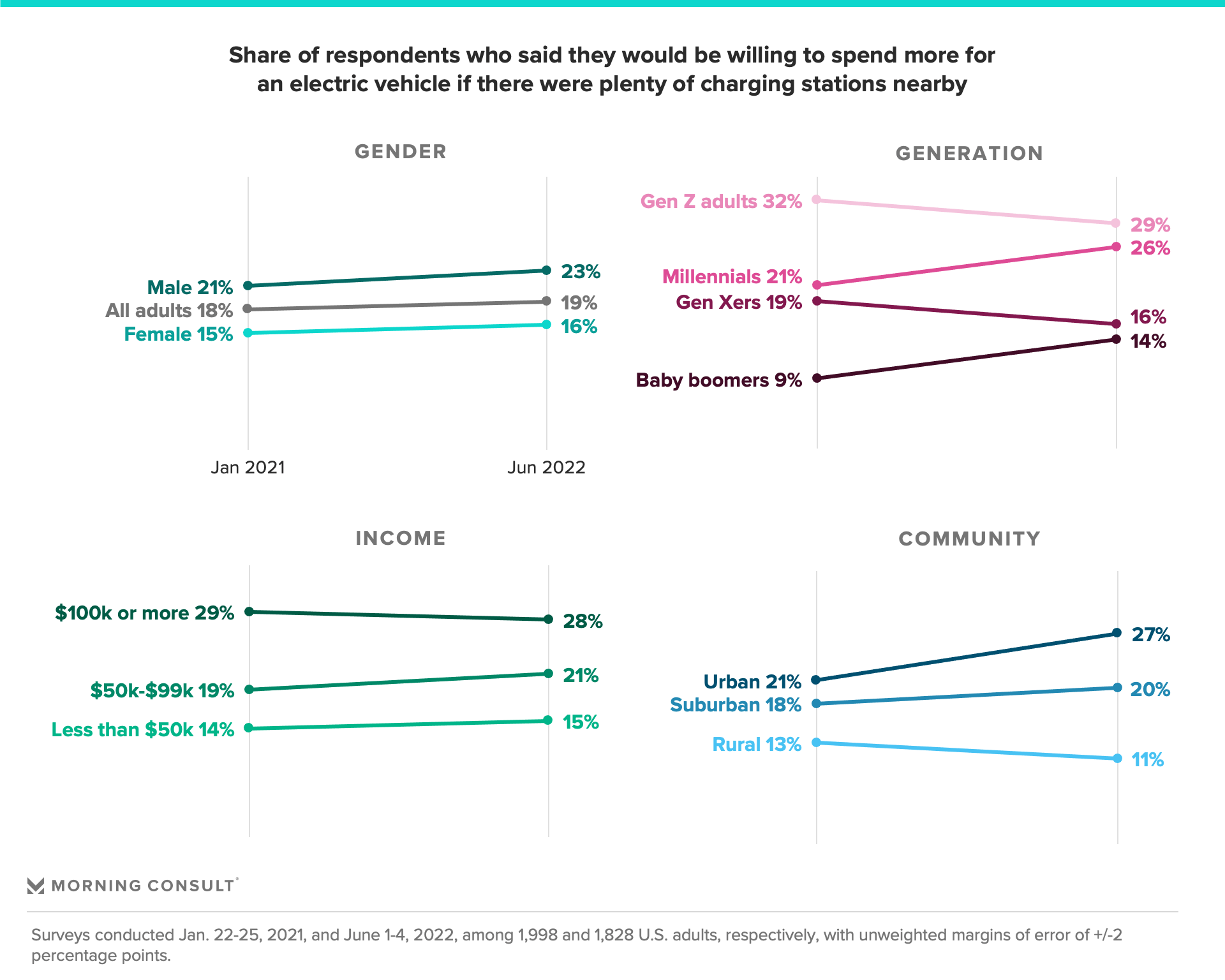 Morning Consult asked consumers if they were willing to spend more for an electric vehicle in a scenario where charging stations access was plentiful. Just a few consumer demographics saw notable gains in the share who said “yes” compared to early 2021 — namely, baby boomers, millennials and those living in urban areas.

Clearly, concern over pricing, as well as lack of spending power in the current environment, are dampening the ability and interest for paying any kind of premium for these vehicles. And while recent moves to increase appetite, such as General Motors’ slashing the price of its Bolt EV by roughly $6,000, are a step in the right direction, they are less impactful if the $7,500 tax credit cap has been reached, as it has already with both GM and Tesla — and soon Toyota.

EV manufacturers have relied on government incentives to some extent to draw potential buyers, and there is a clear and rising interest in this price support on the part of consumers who are interested in purchasing a vehicle.

In June, 36% of consumers who were planning to purchase a vehicle within the next three years stated that financial incentives for electric vehicles would be a major factor in that decision, up slightly from 32% in March. A change in federal policy could potentially foster growth. The number of tax credits an automaker can dole out to consumers are federally capped at 200,000 units, and, as previously mentioned, Tesla and GM have already reached that limit. If the Biden administration wants automakers to sell more electric vehicles, it follows that it needs to increase the number of allowed incentives in order to pull more EV buyers across the finish line.

Automakers are starting to work together to lobby for loosening the tax credit cap, with CEOs of major auto corporations recently calling for the government to take action on this front. Working as a united front will likely pay dividends in the future — automakers need to pull out all the stops available to squeeze out sufficient demand to meet their aggressive future electrification goals.

But in addition to lobbying, manufacturers need to find more ways to collaborate with each other, including joint efforts to educate consumers on the benefits of EVs as well as to dispel some of the deeply entrenched beliefs and concerns around roadblocks.