‘The Sky’s the Limit, Literally’: Why Drones Are the Future of Sports Broadcasts 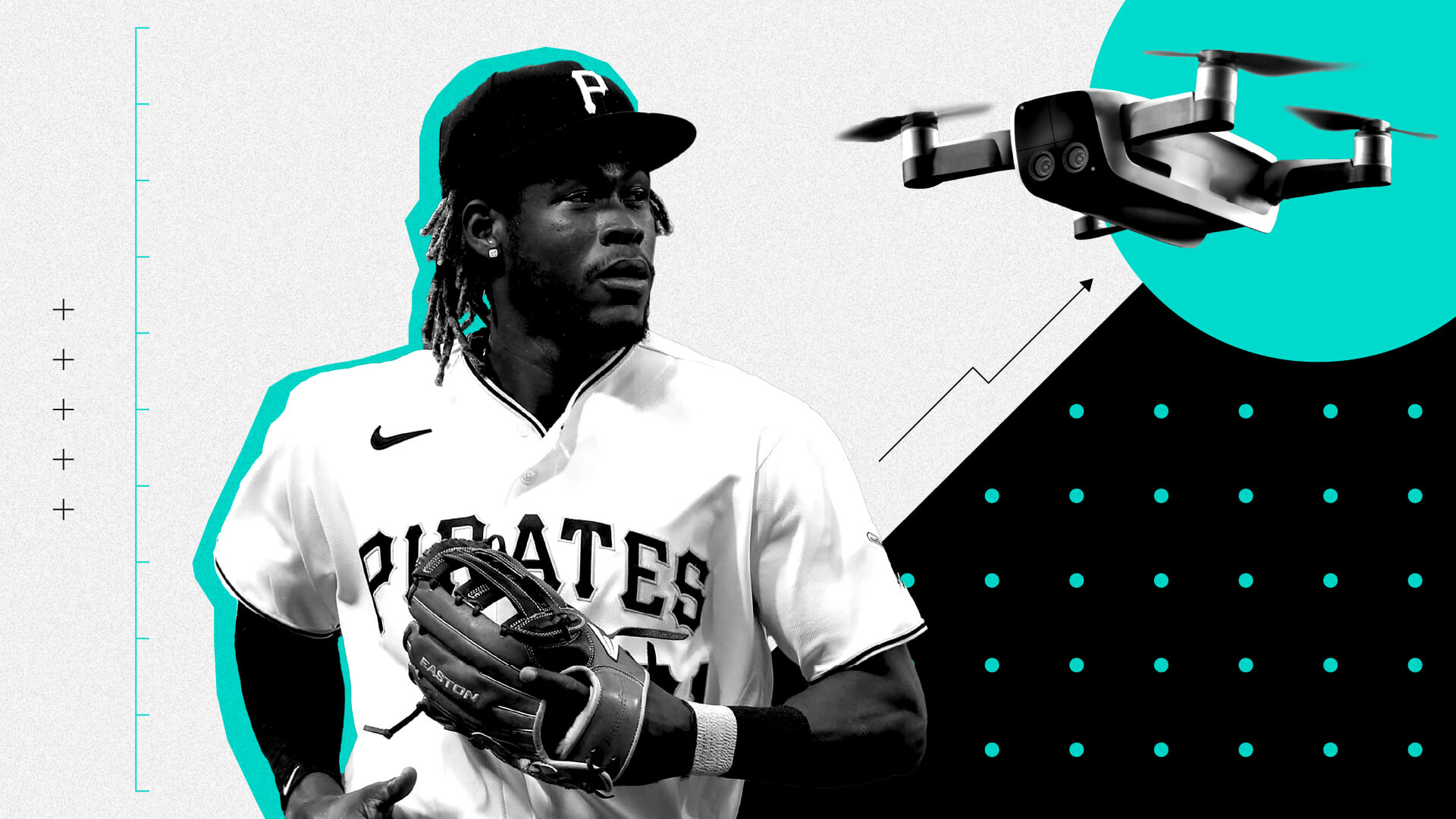 Roughly 2 in 3 sports fans (67%) said they are at least somewhat interested in in watching a game broadcast that includes camera footage from a drone, according to Morning Consult data. (Getty Images, Charles LeClaire-USA TODAY Sports / Morning Consult artwork by Chloe Phan)
By Mark J. Burns

In the cornfields of Dyersville, Iowa, the backdrop for last year’s MLB Field of Dreams game between the New York Yankees and Chicago White Sox, an oversized object captured the August sun setting in the third inning.

It wasn’t the Goodyear Blimp, a helicopter or a plane.

“That is a drone circling a hot air balloon over corn next to a big-league game in Iowa,” said play-by-play broadcaster Joe Buck.

The unplanned spectacle, made possible by a heavy-lift drone, complemented Fox’s use of a much smaller first-person-view device, which provided viewers a peek inside the home from the iconic 1989 film starring Kevin Costner, the inspiration for the event. Together, the drones created a baseball broadcast unlike anything that’s been put on TV before.

“That’s the magic of what these cinematographers and drone pilots give us,” said Brad Cheney, vice president of field operations and engineering at Fox Sports. “The ability to see things through their eyes that none of us would get to experience in person.”

After first testing aerial production drones in 2015, the network has since incorporated the technology into NASCAR, USFL and MLB broadcasts, among other sports properties. Fox will return to Iowa on Thursday night for the next Field of Dreams game between the Chicago Cubs and Cincinnati Reds. Beverly Hills Aerials, whose founder Michael Izquierdo recently piloted a first-person-view drone for a viral golf shot hit by Tampa Bay Buccaneers quarterback Tom Brady, will have multiple drones in tow as they aim to capture the sights and sounds around the Lansing family farm.

T-Mobile US Inc., an MLB sponsor since 2013, will power live drone views of the Field of Dreams game, a year after the telecommunications giant and the Drone Racing League debuted their first 5G-enabled magenta racing drone at the event.

The combination of drones and baseball is a no-brainer for fans, said Amy Azzi, senior director of sports marketing and sponsorships at T-Mobile. “Put them all together, and you’ve got something pretty special,” she said.

Related: Baseball Fans Are Open to the Idea of Robot Umpires

The appeal of drones has quickly taken over sports broadcasting. In addition to Fox, ESPN, CBS, major U.S. professional leagues and teams and other sports entities are finding more use cases for the technology, both during broadcasts and for online marketing.

Improved technology (including enhanced safety features and extended battery life), more-skilled pilots and, most importantly, a willingness from executives to adopt a new approach have elevated drones’ rising popularity across the sports industry in recent years, according to executives and industry professionals.

ESPN received praise in 2020 for its live-drone usage, which was called upon to review plays during the MLS is Back tournament in Orlando. In February 2021, the NHL and NBC Sports captured live broadcast shots around a regular season outdoor game in Lake Tahoe.

A recent Morning Consult survey found that fans have a large appetite for the technology: About 2 in 3 sports fans (67%) said they are either “very interested” or “somewhat interested” in watching a game broadcast that includes camera footage from a drone.

Survey conducted June 27-29, 2022, among a representative sample of 2,210 U.S. adults, including 1,497 self-identified sports fans, with unweighted margins of error of +/-2 percentage points and +/-3 percentage points, respectively. Figures may not add up to 100% due to rounding.

Drone programs are now “part and parcel” to sports coverage

“What are we doing for drone coverage?”

“You can’t run a modern operations department without having a drone program,” said Calcinari, who added that Disney’s internal drone department will reach seven or eight full-time staffers in the near future. “It is part and parcel to the coverage.”

Calcinari said the emphasis on drones is two-fold. Production partners and leagues expect the technology integration, while there’s also a shortage on blimps and other aerials such as airplanes and helicopters. An internal drone department allows ESPN, which marked its first foray into drones at the 2015 Winter X Games, to avoid relying on third-party vendors.

The eight-team Fan Controlled Football League, a “digital-first” startup that allows fans to vote for which play their team should select next, leveraged drone technology in its first two seasons, with “80% to 90%” of footage being live, according to Patrick Dees, co-founder and chief gaming officer. Most drone footage across the industry is live versus taped, and broadcasters expect that trend to continue.

Dees said he wanted the on-field product to be “instantly accessible in a way that ‘Madden’ is,” referring to the popular NFL video game. The FCF has deployed multiple drones during competition, hovering near teams’ huddles, trailing plays overhead, zooming in to highlight interceptions and even capturing FCF team owner and DJ Steve Aoki calling a touchdown play. Dees calls it the “hero cam.”

“Everybody loves sports because of the pace,” Dees said, “and drones feel uniquely equipped to provide that pace and that excitement.”

In the NHL, the New York Rangers took fans on a first-person-view drone tour of Madison Square Garden that Matt Coy, vice president of event presentation at MSG Sports, referred to as a “great stepping stone” toward future drone integrations.

“It surpassed my expectations,” said Danny Meiseles, executive producer at MSG Sports. “I thought it was going to be a very cool creative to have in our in-game presentation. I did not expect that it would do as well on social as it did.” The team’s tweet featuring the drone video earned more than 1,100 retweets, one of the highest totals of the season.

Premier Lacrosse League co-founder Paul Rabil said drones help educate fans, both new and old, and are “becoming more of a focus” for the league, which held its first season in 2019.

To date, the PLL has primarily posted drone-captured content on social media, sometimes layered in with broadcast commentary, which has led to higher engagement, according to Rabil. He called drone coverage “a significant point of differentiation” for the lacrosse league, which aims to stand out on social media across the sport’s highlight-heavy ecosystem. For the first time, the PLL and media partner ESPN tested live drone coverage during Friday night’s broadcast between the Cannons Lacrosse Club and Redwoods Lacrosse Club.

Stephen Perkins, executive vice president of fan engagement and marketing for the Pittsburgh Pirates, said he tasked his marketing group to “find ways to create moments that drive attention.” After watching the Oakland Athletics’ Star Wars-themed drone light show last year, the Pirates produced their own for the first time, which incorporated 200 drones — all computer-programmed with a predetermined flight path — into a 10-minute viral performance. Perkins said the show cost in the “mid-to-high five-figure range.”

“The sky’s the limit, literally, in what the drone technology can do,” Perkins said, adding that the team plans to use drones on a “somewhat fairly regular basis,” including again on Sept. 3 to coincide with the Pirates’ Hall of Fame celebration.

In a perfect sports universe, devoid of any red tape, legal hurdles or security issues, MSG Sports’ Coy described a wishful scenario of five drones flying in an arena or around a ballpark and capturing player-level content via a drone broadcast feed, which viewers could choose to watch.

Nearly 2 in 5 Sports Fans Are Interested in Drone Megacasts

Respondents were asked how interested they would be in watching a sports game broadcast that uses only a drone or multiple drone cameras for footage, rather than traditional camera footage

Survey conducted June 27-29, 2022, among a representative sample of 2,210 U.S. adults, including 1,497 self-identified sports fans, with unweighted margins of error of +/-2 percentage points and +/-3 percentage points, respectively. Figures may not add up to 100% due to rounding.

While drone-only broadcasts may be far away, executives agreed that capturing tighter, closer, action-packed shots is where the industry is headed. First, though, media executives, union officials and league personnel need to agree about just how close to the field of action and players is appropriate — and safe.

“That’s the future,” ESPN’s Calcinari said. “The closer we can get to the object, the better.”

Some executives raised other possibilities. What’s the perspective of Kansas City Chiefs quarterback Patrick Mahomes sitting in the pocket, trying to dodge a 350-pound lineman? Or New York Yankees first baseman Aaron Judge standing in the infield, preparing for the next pitch? Fans getting to see what the athletes see, via drones, isn’t such a far-fetched idea.