The Public Strongly Believes in the Effectiveness of Recycling, but Less So About a Prompt Ban on Single-Use Plastics

74% of U.S. adults think recycling is effective when it comes to protecting the environment and combating climate change, while 56% would back a single-use plastics ban as soon as possible 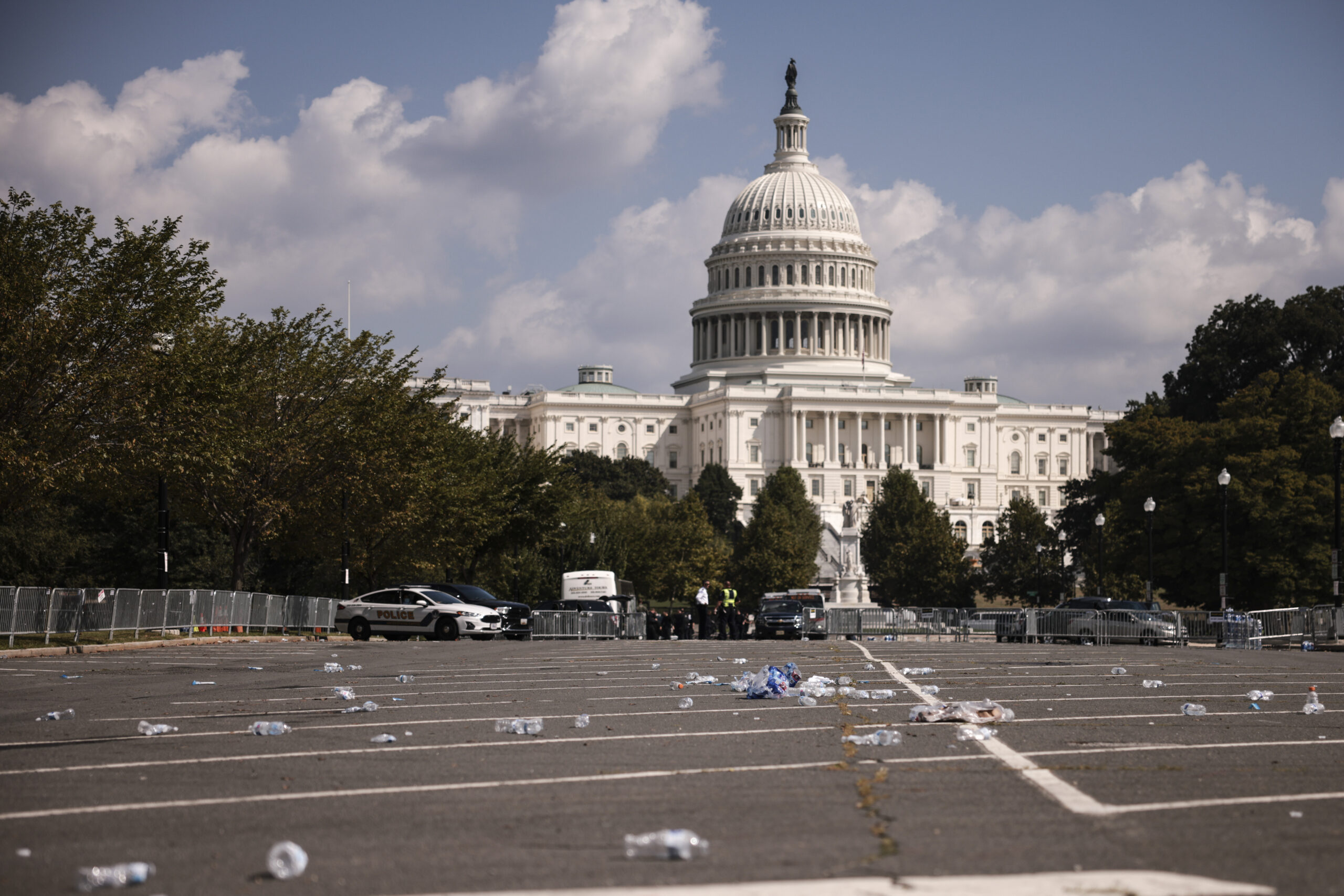 A police staging area sits empty and littered with water bottles at the end of a rally near the U.S. Capitol on Sept. 18, 2021, in Washington, D.C. (Anna Moneymaker/Getty Images)
By Julia Martinez

The soda aisle is looking a little less green this month after Coca-Cola Co. debuted an all-clear Sprite bottle, an attempt to provide more opportunities for the plastic they are made out of to be recycled into other products.

The push for more recyclable products and products made with more recycled materials has also led countries like Canada and India to prohibit the production and import of some single-use products, and states like California to launch investigations on oil giants for their alleged role in the crisis.

Those efforts have been sparked by a renewed focus on the plastic pollution crisis, as less than 10% of the 7 billion metric tons of plastic waste generated globally so far has been recycled.

U.S. adults largely seem to agree on the effectiveness of recyclability and the role companies play in dealing with plastic waste, a Morning Consult survey found, though support for a single-use plastic ban is comparatively muted.

About 3 in 4 Adults Believe in the Effectiveness of Recycling

About 3 in 4 adults said recycling is effective when it comes to protecting the environment and combating climate change, the survey showed. Additionally, a similar share believes that companies should be responsible for reducing, reusing and recycling plastic packaging that they produce.

Respondents were asked how responsible each of the following are for combating climate change and protecting the environment:

Coca-Cola’s move comes at a time when the Biden administration is asking the public for feedback on a proposed rule to ban the General Services Administration, a federal agency tasked with contracting for the government, from purchasing single-use plastics. The federal rulemaking follows a petition filed in early February by the Center for Biological Diversity and backed by more than 180 green groups.

“Whether or not it’s gonna happen, it’s hard to say, but I think that this administration has shown a willingness to look inward and see what the federal government can do,” said Emily Jeffers, staff attorney at the Center for Biological Diversity.

The type of effort shows the rest of the market that these types of policies are possible, added Anthony Tusino, senior program officer for plastic policy advocacy at the World Wildlife Fund.

The American Beverage Association, a lobbying group representing members like Coca-Cola and PepsiCo Inc., said it was working to design beverage bottles to be 100% recyclable but did not say whether it supported the rulemaking.

The group shares “the goal of reducing plastic waste and look forward to working with the Biden administration to drive progress toward circularity and reduce the use of new plastic in our lives,” a spokesperson said.

But the public seems a bit more hesitant about a wide-scale single-use plastic ban: 56% of adults supported a ban on those plastics as soon as possible, with shares among Democrats and Republicans dropping to 69% and 42%, respectively.

In Congress, Sen. Jeff Merkley (D-Ore.) is still working on the Break Free From Plastic Pollution Act to address the plastic pollution crisis and Rep. Alan Lowenthal’s (D-Calif.) office is looking for someone else to take up the measure as Lowenthal is set to retire this session. Meanwhile, a June report from the World Wildlife Fund shows that more Americans want Congress to prioritize addressing plastic waste pollution now than they did in 2020.

Rather than pursuing bans, the plastics industry is pushing for more advanced recycling, a process that some environmentalist groups have said is greenwashing incineration.

Joshua Baca, vice president of the plastics division for the American Chemistry Council, said rulemaking such as the Biden administration’s proposal could hinder broader environmental and climate goals, mirroring recent comments from the Plastics Industry Association.

The report showed soft drink containers made of PET plastic, for example Sprite, have the lowest emissions because of how lightweight they are, which helps with transportation emissions, and the amount of energy required to produce them.

But the report also noted that PET bottles have the lowest recycling rates and credits from avoided virgin production among their glass and aluminum counterparts. The plastic bottles also release carbon dioxide when they are burned, unlike the two alternatives, have shorter shelf lives and lose their fizziness faster.

That type of model, called an extended producer responsibility or EPR, was recently adopted in California, where the state is aiming to make all single-use packaging, including paper and metals, recyclable or compostable by 2032. By that time, plastic producers should also reduce plastic packaging by 25%.

The goal is to, eponymously, extend the responsibility to fund the cost of recycling infrastructure, collection and sorting facilities from taxpayers to plastic manufacturers.

These types of measures likely have broad support from the public: 3 in 4 adults said companies are responsible for reducing, reusing and recycling plastic packaging they produce, with strong backing from Democrats and Republicans alike.

Respondents were asked how responsible companies are for reducing, reusing and recycling plastic packaging they produce:

Similar policies have also been springing up across the nation this year, as have the facilities that would make them work. Critics note that incinerators disproportionately affect communities of color and that so-called advanced recycling centers might not lower greenhouse gas emissions.

Groups like the Center for Biological Diversity and many others don’t believe that recycling is the answer.

“I think the answer is just using less of the stuff,” Jeffers said, adding that it doesn’t matter whether something is recyclable if there are no facilities nearby for that product to get recycled. “It’s just going to go to the landfill.”