European energy solidarity isn’t dead, but regional gas-sharing agreements and sympathy for Germany are both in woefully short supply, with mixed implications for industry 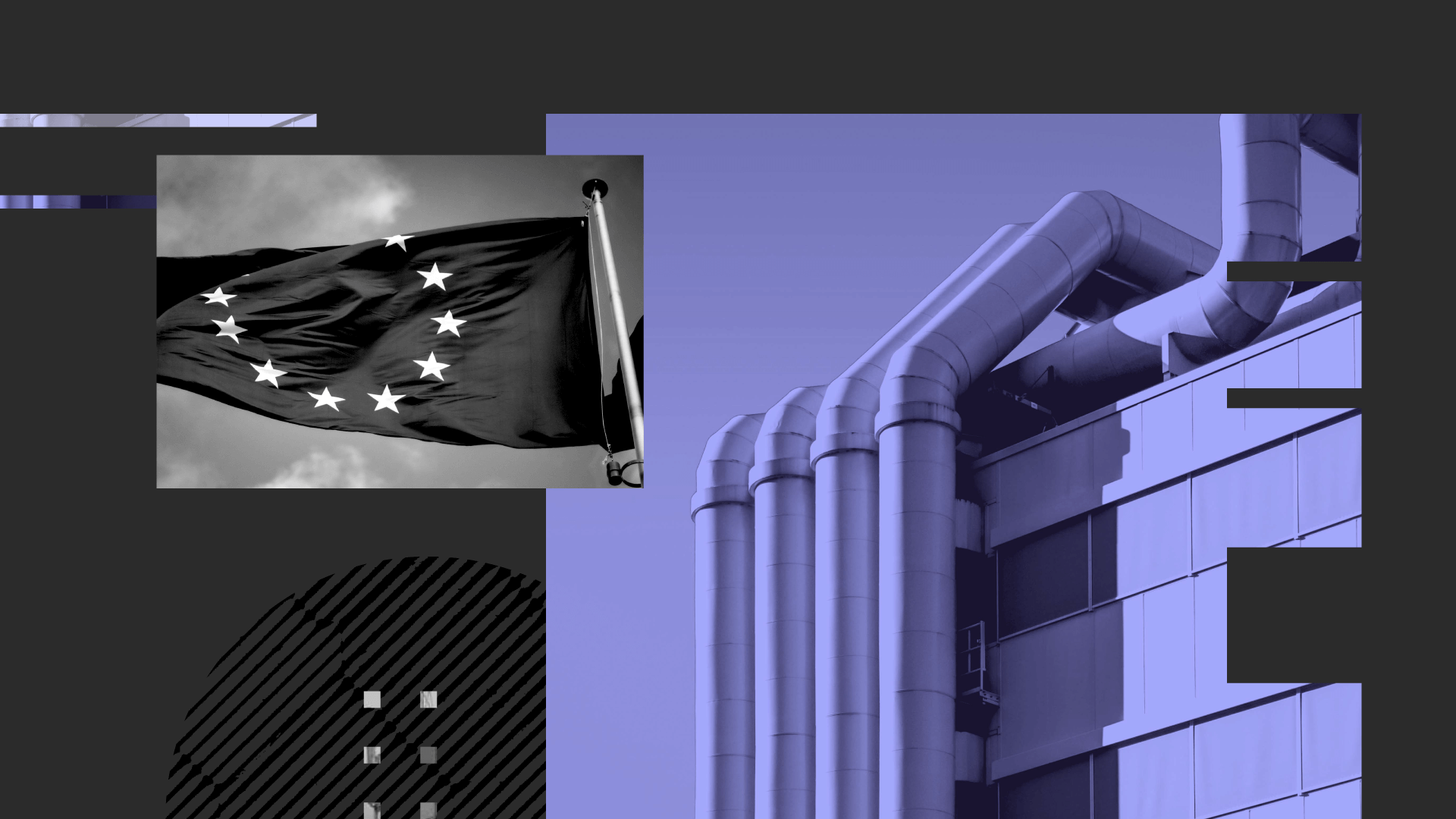 Winter is coming: The Russian-engineered gas shortage is a downside risk for Germany and Europe

Europe surprised the world with an unprecedented show of solidarity in the face of Russia’s invasion of Ukraine: E.U. member countries and the United Kingdom jointly imposed successive waves of sweeping sanctions and export controls in conjunction with other Western allies, and sent aid and weapons (as well as their own political leaders) to Ukraine. Six months into the invasion, the European Union is once again calling for solidarity against Russian bullying, only this time to help Germany.

Despite Germany’s ongoing efforts to diversify its energy sources, Russia still accounted for 26% of its gas imports as of June 2022, equivalent to nearly one-ninth of Germany’s overall energy supply. With gas arriving via Nord Stream 1 — the main gas pipeline from Russia — at 20% capacity due to the latter’s political machinations, and with European wholesale gas prices already sky-high, the continent’s largest economy is struggling to maintain sufficient gas supplies to heat residences and power industry through the winter. More Russian pressure is expected, including a three-day supply cutoff starting Aug. 31. Many speculate that the flow of gas might not resume on time.

Low Gas Volume via Nord Stream 1 Poses a Major Challenge With Winter Approaching
Flow through the pipeline is at roughly 20% of capacity
Source: European Network of Transmission System Operators for Gas (ENTSOG)

In a positive development for Germany, most adults in other major European economies believe their governments have a joint responsibility to diversify Europe’s energy resources, and should share the costs of doing so.

Europeans View Energy Diversification as a Collective Effort
Shares of adults who think either Germany or all European countries collectively should bear the cost of and responsibility for diversifying their gas supplies
Surveys conducted Aug. 5-6 in the United Kingdom among a representative sample of 2,000 adults, with an unweighted margin of error of +/-2 percentage points, and Aug. 16-17 in France, Germany, Italy and Spain among representative samples of 1,000 adults in each country, with unweighted margins of error of +/-3 percentage points. “Don’t know/No opinion” responses are not shown.

Europeans’ inclination toward joint action likely stems from an awareness that they are effectively in the same boat. All 27 E.U. member states are net energy importers with varying levels of exposure to Russia, which has decreased or cut off supplies to around a dozen countries in recent months. Energy infrastructure that could help mitigate the impact of such shortages, like liquified natural gas terminals and storage facilities, is unequally distributed around the continent, such that failure to help Germany will hurt the European Union. A recent study from the International Monetary Fund, meanwhile, showed that more closely integrated E.U. energy markets with functioning gas-sharing agreements would greatly blunt the impact of a Russian gas shut-off. Yet only six bilateral gas-sharing arrangements are currently in force.

Germany’s role as the industrial engine of the European Union also means that macroeconomic headwinds attributable to the energy crisis in Germany will have major knock-on effects in the rest of Europe.

Related: E.U. Energy Integration Could Save Germany From Its Natural Gas Dilemma

But Europeans would ultimately prefer to be energy independent

Despite supporting cost sharing in the context of energy supply diversification, more adults among the same group of countries would prefer to be energy independent than reliant on energy imports. Southern European countries like Italy and Spain are especially keen.

Energy Nationalism Exerts a Strong Pull Across Europe
Shares of Europeans who prefer energy independence over cross-national partnerships
Surveys conducted July 12-16, among representative samples of 1,000 adults in each country, with unweighted margins of error of +/-3 percentage points. “Don’t know/No opinion” responses are not shown.

While unsurprising in the context of Russia’s weaponization of energy and rising prices, these attitudes, coupled with the return of old intra-E.U. grievances, are hindering efforts to deal with the current crisis. For years, successive German administrations insisted that Nord Stream 1 and Nord Stream 2 were purely commercial projects and waved off their allies’ geopolitical concerns, even as Russia periodically cut off gas supplies to Ukraine and other countries when they stepped out of line. Those in Central and Eastern Europe are now sorely tempted to diplomatically crow “I told you so.” In many southern European countries, the memories of Germany’s lectures on fiscal responsibility during the 2010-2012 debt crisis are still fresh. The latter’s current energy predicament has therefore provided an opportunity for its southern neighbors to indulge in a little schadenfreude.

European countries’ growing frustration can be seen in their average declining favorability toward Germany from March to July, when Germany pushed for bloc-wide rationing. This followed a boost that began in late February as E.U. countries began to show strong solidarity in the face of Russia’s invasion of Ukraine. Recent declines illustrate the fraying edges of the united European front.

Frustration With Germany Grew Across Europe When It Requested Gas Rationing
Change in Germany’s net favorability among European neighbors from March to July
Net favorability is the share of respondents with a favorable view minus the share with an unfavorable view.
Source: Morning Consult Political Intelligence. Data reported is based on monthly aggregates for all countries shown, with country-specific margins of error of between +/-2 and +/-6 percentage points.

When it comes to the core set of policy responses that many E.U. governments are currently debating to further their own energy independence before winter sets in, Europeans are amenable to extending the life of existing alternative energy sources, like nuclear and coal, and cutting deals with authoritarian regimes that command large energy reserves, like Saudi Arabia. But they chafe at paying more for energy supplies — either directly or via tax hikes — and are unenthusiastic about rationing. E.U.-wide price caps would thus be popular, as long as they did not entail higher taxes. This is unsurprising amid today’s period of persistently elevated inflation. Meeting ambitious European targets to curb consumption by 15% will necessitate cuts by households, but governments have been understandably loath to pass on rising costs to consumers.

Western Europeans’ Support for Energy Diversification Policies Is Weakest Where Household Costs Are Highest
Net support for each of the following policies European governments could pursue to limit their dependence on Russian gas: 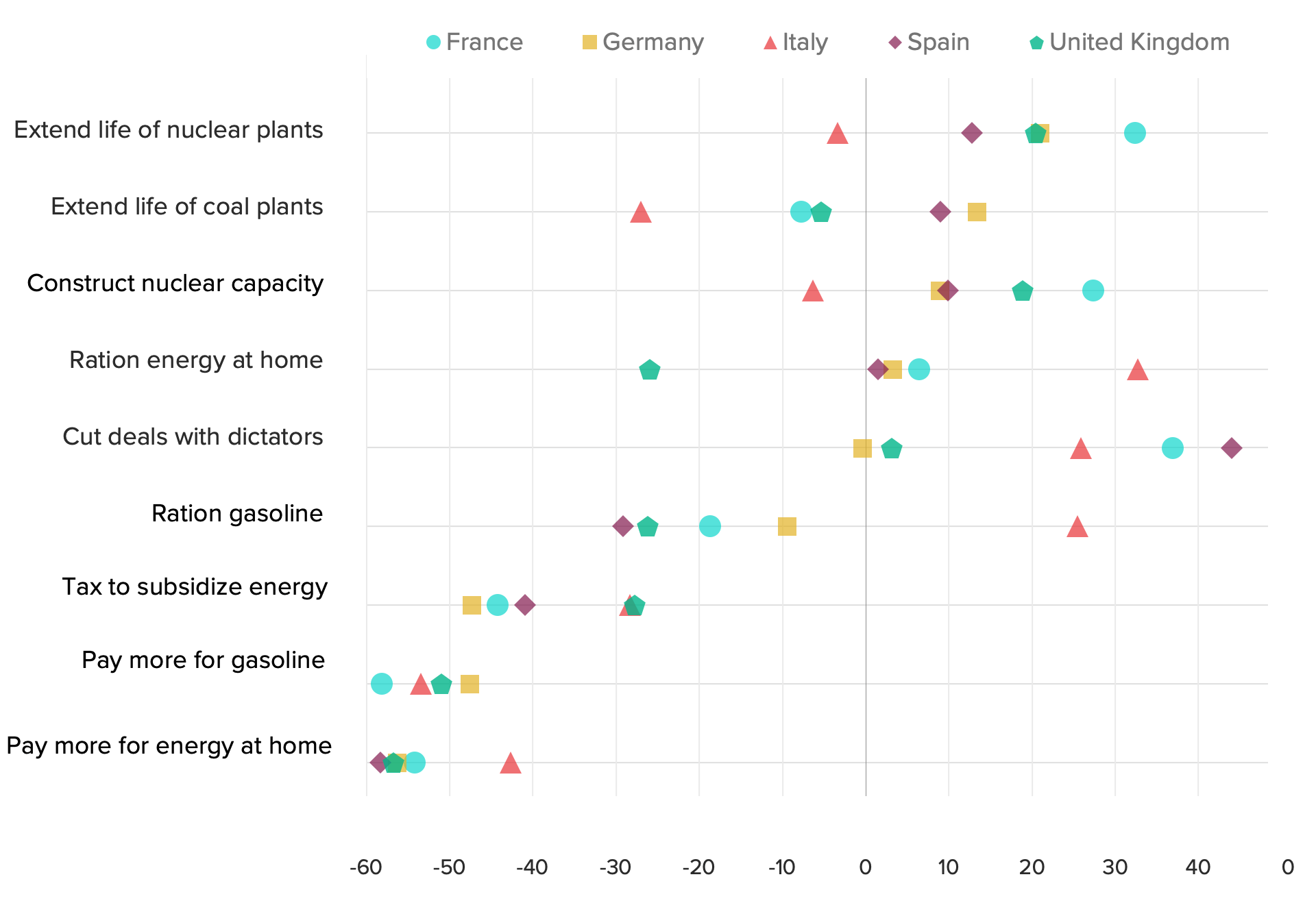 Net support is the share of respondents who support each policy minus the share who oppose it.
Surveys conducted Aug. 5-6 in the United Kingdom among a representative sample of 2,000 adults, with an unweighted margin of error of +/-2 percentage points, and Aug. 16-17 in France, Germany, Italy and Spain among representative samples of 1,000 adults in each country, with unweighted margins of error of +/-3 percentage points. “Don’t know/No opinion” responses are not shown.

Despite supporting cost sharing in principle, Europeans are less enthusiastic about pursuing many of these same policy options to help their neighbors, including Germany. Among the top five policy responses that see the highest average levels of European support when it comes to safeguarding their own countries’ energy needs, smaller shares support adopting these policies to help “friendly neighbors.” Germany’s large European neighbors are somewhat less willing to extend the life of coal and nuclear plants to help allies instead of helping their own diversification, and much less willing to ration energy for a neighbor’s energy security than for their own. This helps explain the difficulty the European Union recently had in passing even a watered-down gas rationing plan, and it bodes ill for any future attempts to agree on rationing targets.

Western Europeans Are Much Less Willing to Ration Residential Heating for a Neighboring Country
The difference in net support for the following measures when they are to help allied European countries as opposed to the respondent’s own country:

Net support is the share of respondents who support each measure minus the share who oppose it.
Surveys conducted Aug. 5-6 in the United Kingdom among a representative sample of 2,000 adults, with an unweighted margin of error of +/-2 percentage points, and Aug. 16-17 in France, Germany, Italy and Spain among representative samples of 1,000 adults in each country, with unweighted margins of error of +/-3 percentage points.

Our data suggests that to gain public buy-in for voluntary rationing, commercial and political proponents should frame it as a means of keeping prices from rising further, and emphasize the positive effects that rationing would have on domestic energy. In parallel, the least fraught measures for interested parties to pursue in the name of European solidarity are projects to extend the life of existing energy infrastructure and to bring new capacity online. Europeans will view such investments — which could present commercial opportunities for companies in certain industries, like construction and energy supply — more favorably than subsidies and rationing, even if quickly increasing energy supply diversity is a long-term play that won’t pay dividends in the immediate future.

Industry groups, meanwhile, can help E.U. countries work toward longer-term energy independence. It is in their enlightened self-interest to do so. National champions in heavy industries will be tempted to push for autarkic energy policies like export restrictions in their home countries by playing on the public’s concerns about the rising cost of living and strong desire for energy independence. But doing so would impede the progress of long-term initiatives that could lead to greater energy diversification at the E.U. level — specifically, the development of a robust, region-wide energy policy that codifies energy sharing. This remains many countries’ most viable option for emerging from the current politically motivated crisis and avoiding future ones.