Concerns About Mass Shootings and Other Violent Crimes May Be Scaring Chinese Travelers Away From the U.S. 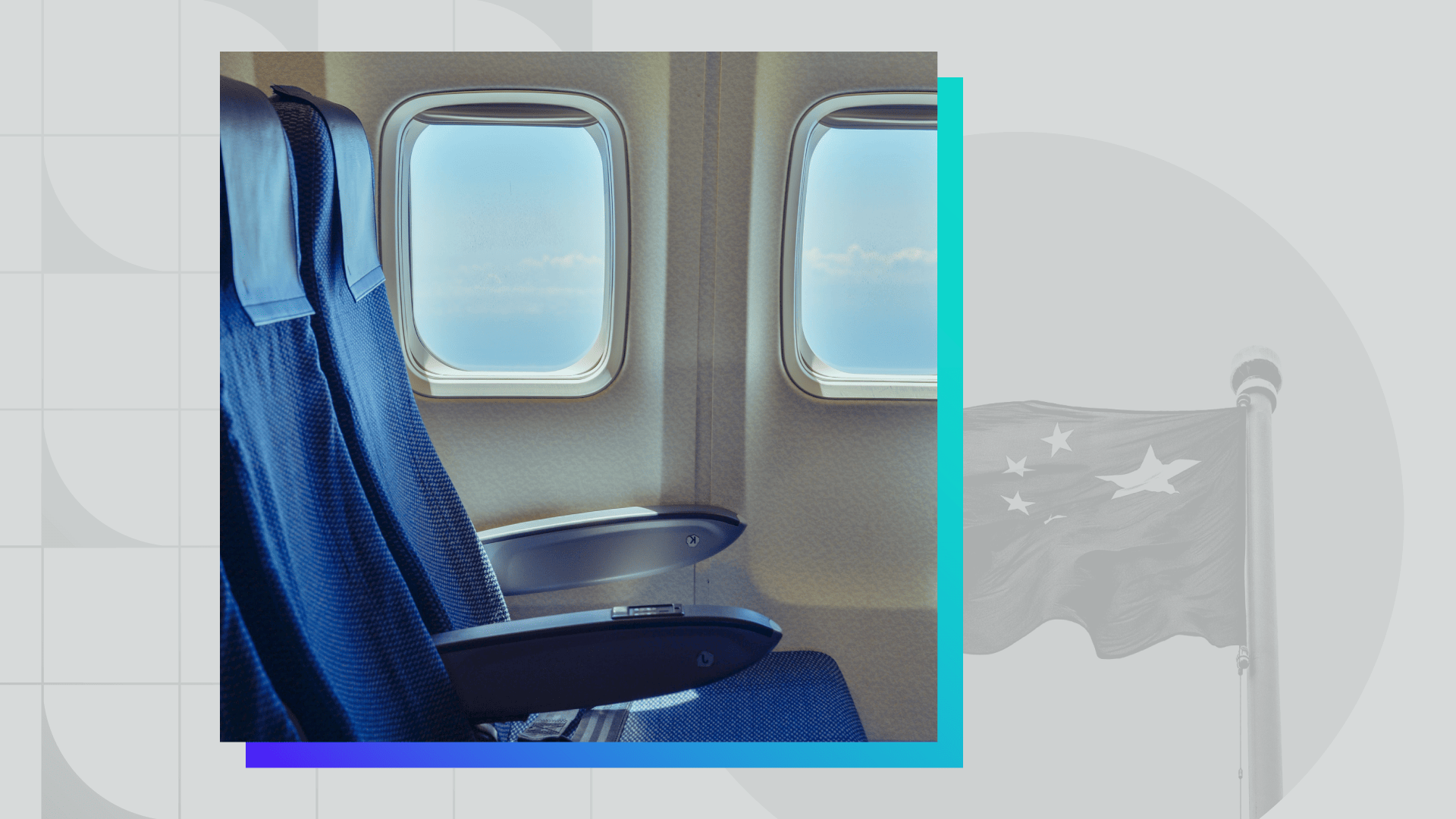 International trips are back on the map for Chinese travelers.

As initial pandemic-related restrictions and lockdowns continue to ease, domestic travel has regained ground and remained consistently popular throughout 2022: Roughly 9 out of 10 Chinese adults with plans to travel say they will go on a domestic trip. But the share of those with travel plans who say they will or might travel abroad in the coming year, which was comparatively low in the spring, rose 23 percentage points between April and July. Now 1 in 5 Chinese adults say they will “definitely” travel internationally.

This is welcome news for the global travel industry, as Chinese outbound tourism accounted for nearly one-fifth of all international tourism spending and was the third largest contributor of international tourists to the United States in the years leading up to the pandemic. But American companies may not have as much reason to celebrate. Chinese travelers express less interest in visiting the United States compared with several other regions and countries — particularly Europe, which 54% of Chinese are interested in visiting, compared with only 35% who say the same for the United States. And a plurality of Chinese have little to no interest in U.S. travel.

Chinese Travelers Prefer Other Destinations Over the United States

Chinese adults reported their level of interest in traveling to the following countries and regions:

Distance and cost are certainly factors. Asia-Pacific destinations like Australia, Japan and South Korea are easy for Chinese travelers to reach, and even the United Kingdom has become more accessible recently thanks to its Department for Transport and China’s Civil Aviation Administration announcing resumed direct flights last month. But distance is only part of the equation. The share of Chinese who would like to visit Canada — similar to the United States in terms of distance and cost — is 11 points higher compared with its southern neighbor. Similarly, the share of Chinese who say they aren’t at all interested in traveling to the United States at all is 10 points higher than for Canada.

China’s “zero-COVID” policy has made some travelers exceptionally cautious to avoid infection while abroad. Nearly two-thirds of Chinese adults say they would be “very concerned” about COVID-19 if they were traveling internationally. Such worries extend far beyond immediate health concerns. Even healthy returnees face long quarantines upon arrival, and the consequences of exposure can be severe. The Chinese government stores information about citizens’ previous infections in electronic health records, and many Chinese report facing social isolation and employment discrimination after they recover. These factors may dampen Chinese enthusiasm for venturing abroad.

Concerns about COVID-19 don’t explain Chinese travelers’ more limited appetite for visiting the United States relative to other countries. In fact, our data suggests the opposite: Nearly two-thirds of Chinese (63%) say they are very concerned about traveling abroad in general due to COVID-19, compared with only 57% who say the same about traveling to the United States specifically. 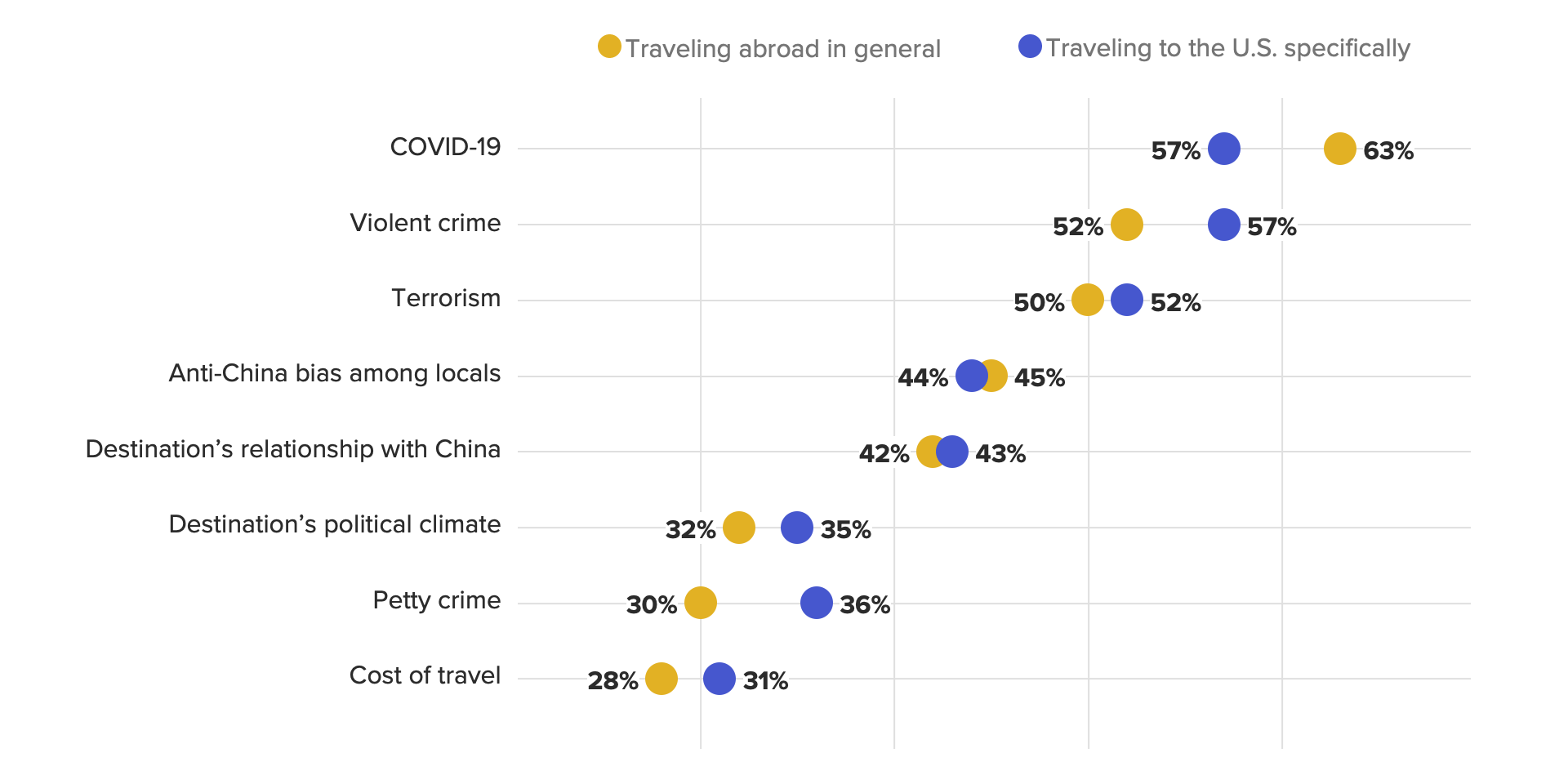 Survey conducted Aug. 1-5, 2022, among a representative sample of 1,000 Chinese adults, with an unweighted margin of error of +/-3 percentage points. 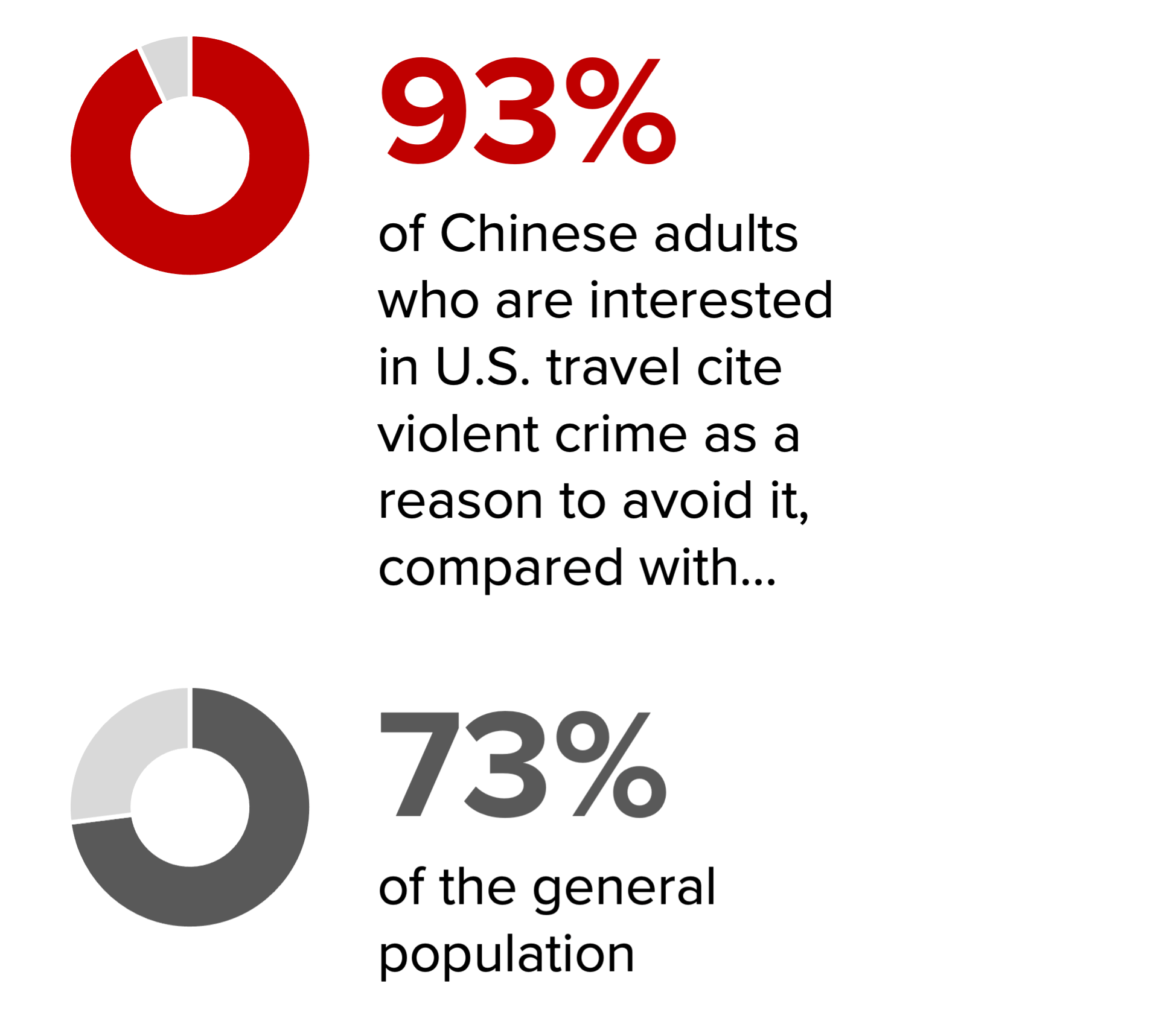 Among those interested in U.S. travel, fear of gun violence is a major deterrent

Not only is the United States the least popular destination with Chinese travelers out of all destinations surveyed, but fears of violent crimes like mass shootings may deter even those who are already interested in traveling there. Among the 35% of Chinese adults who describe themselves as “somewhat” or “very” interested in traveling to the United States, a staggering 93% say they are so worried about violent crime that they might ultimately forgo a visit, compared with 73% of Chinese adults overall. Violent crime is, moreover, the top concern for this group of interested travelers, outpacing even worries about COVID-19, if just barely. There is intensity to this concern: Of those interested in U.S. travel, 6 out of 10 say violent crime is a major reason to reconsider a trip.

Violent Crime Is a Red Flag for Chinese Travelers Interested in Visiting the United States
Shares of those who are “somewhat” or “very” interested in traveling to the United States reporting whether various concerns might deter them from doing so, as compared with Chinese adults overall
Survey conducted Aug. 1-5, 2022, among a representative sample of 1,000 Chinese adults, including 351 who are interested in U.S. travel, with unweighted margins of error of +/-3 and +/-5 percentage points, respectively. Figures may not add up to 100% due to rounding.

Those with an interest in visiting the United States are likely paying closer attention to news about this prospective destination, and alarmist Chinese media coverage of events in the United States — and of gun violence in particular — may be heightening anxieties.

Government officials, tourism boards and industry groups hoping to entice hesitant Chinese travelers to the United States should emphasize the safety and stability of U.S. destinations in their China-focused advertising. But convincing them will not be easy. China’s state-controlled media gleefully report on episodes of violent crime in the United States, and especially mass shootings, to emphasize the superior safety of China’s authoritarian system, which tightly restricts gun ownership. Unsurprisingly, while China has had its own challenges preventing violent public attacks, they tend to receive far less coverage in the country’s highly restricted and strategically curated media ecosystem. 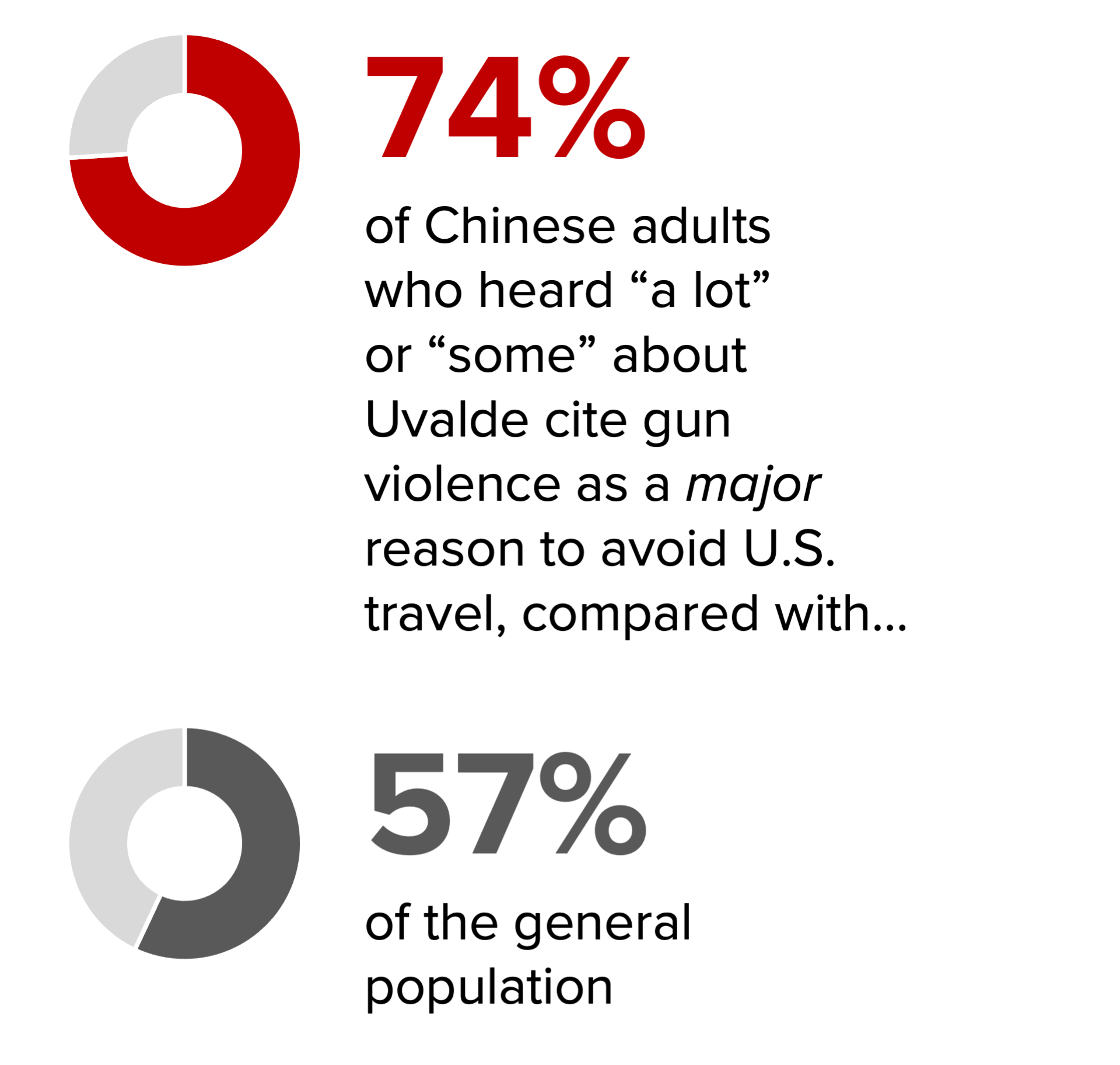 The United States has also dealt with a more specific epidemic — violence against Asians — and this could be influencing Chinese travelers as well, compounding their fears of violent crime. However, concerns about anti-China bias among local populations score comparatively lower as a deterrent for both Chinese adults specifically interested in traveling to the United States and Chinese adults overall. Moreover, there is a difference in intensity: Just 43% of those interested in U.S. travel cite anti-China bias as a major concern that would cause them to rethink travel, compared with 60% who say that violent crimes such as shootings are a major concern that would give them pause.

Chinese state media’s coverage of the May 2022 mass shooting in Uvalde, Texas — which featured numerous editorials lambasting the gun violence epidemic in the United States and imploring the United Nations to investigate U.S. gun violence as a human rights issue — is a case in point.

State Media Coverage of U.S. Mass Shootings, Including Uvalde, May Be Scaring Off Chinese Travelers
Chinese adults who are aware of the Uvalde school shooting are more likely to cite gun violence as a deterrent to visiting the United States

Survey conducted Aug. 1-5, 2022, among a representative sample of 1,000 Chinese adults, including 525 who reported having seen, read or heard “some” or “a lot” about the Uvalde school shooting, with unweighted margins of error of +/-3 and +/-4 percentage points, respectively.

Among the slight majority of Chinese adults (53%) who say they have heard “a lot” or “some” about the mass shooting in Uvalde, 74% say violent crimes like mass shootings are a major reason to avoid traveling to the United States, compared with 57% of Chinese adults overall who say the same — a noteworthy 17-point difference. The gap is similar when examining the share who cite violent crime as a major or minor reason to avoid U.S. travel. Awareness of the Uvalde shooting also appears to have crystallized China’s would-be travelers’ concerns about gun violence, as evidenced by the 13-point decrease in uncertainty among Uvalde-aware adults compared with adults overall.

The U.S. travel industry can’t flip a script it didn’t write, but it has options to mitigate Chinese travelers’ concerns

To the chagrin of American travel companies, state and local travel boards, and destinations desiring greater tourism revenue, there is little they can do to shape how Chinese media covers the United States. However, they can work to counter Chinese travelers’ concerns.

They should double down on safety-related messaging in marketing campaigns targeting Chinese consumers, which could foment interest in visiting the United States. They must also continue to communicate their strategies for ensuring the safety of Chinese travelers, particularly since America’s gun violence epidemic shows no signs of slowing down and will therefore pose an ongoing deterrent to prospective tourists.

In many cases, knowledge and awareness can help travelers feel safer when they’re in an unfamiliar location. Travel brands should lean into this by providing pre-departure information on safety tools and tips. Those who want to take additional action may consider providing access to safety-oriented tour guides or a designated personal safety representative during travelers’ stays. Measures such as these should help to incentivize ongoing travel to the United States among a large and dynamic overseas audience that the U.S. tourism sector would be hard-pressed to replace.