After a Scorching Summer, Heat Waves Are a Local Concern for 7 in 10 U.S. Adults

About 2 in 3 Americans are concerned about droughts’ impact on their community, with 7 in 10 Western adults citing water shortages as a major reason 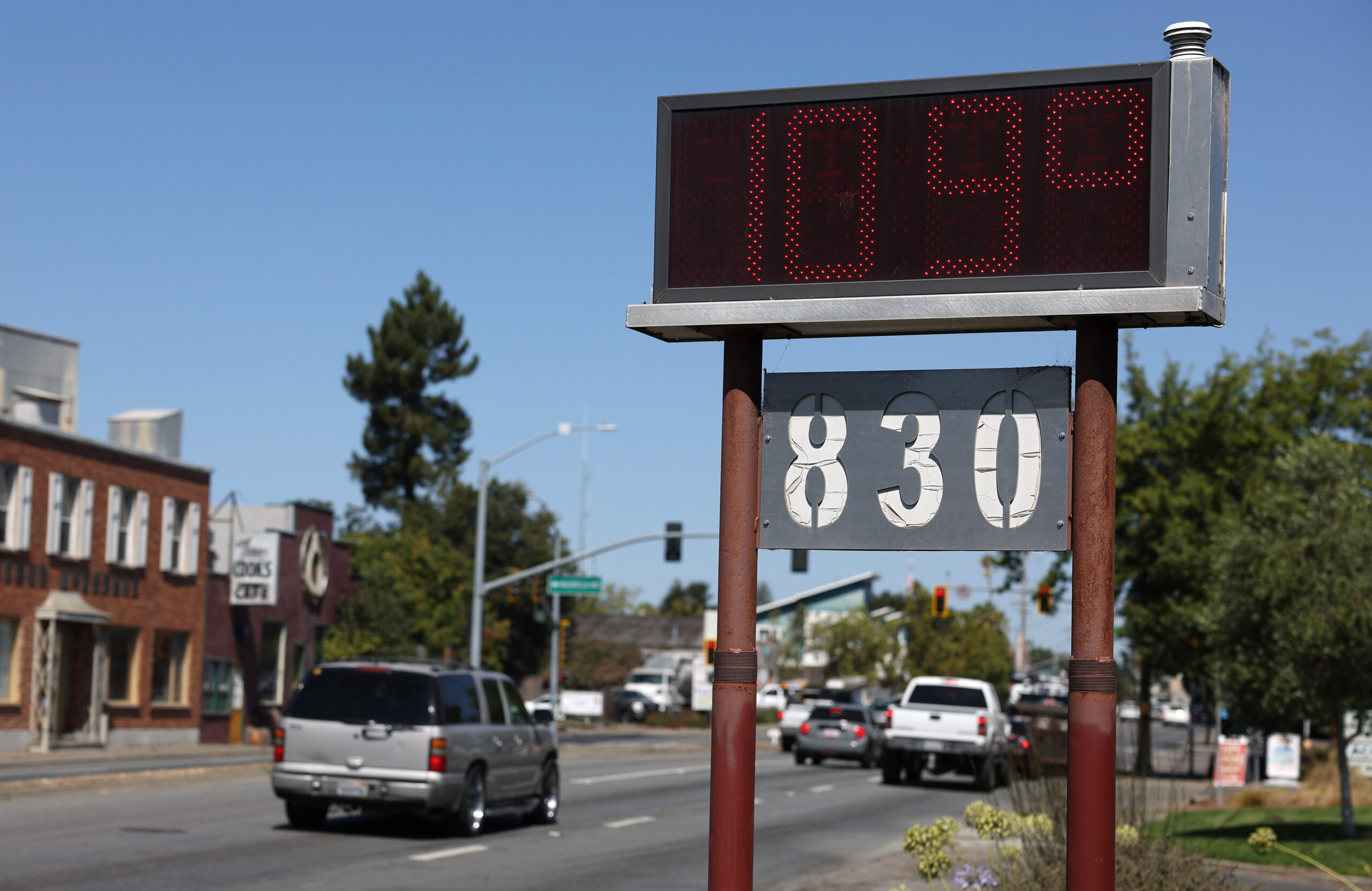 A sign displays a temperature of 109 degrees on Sept. 6, 2022, in Petaluma, Calif. A Morning Consult survey found that about 7 in 10 U.S. adults are concerned about heat waves in their communities. (Justin Sullivan/Getty Images)
By Julia Martinez

California has slowly been cooling off following a record-setting heat wave this summer that exacerbated a widespread drought and made wildfires harder to fight, painting a stark picture of how climate change is going to make summers hotter and longer.

A Washington Post analysis of data from the National Oceanic and Atmospheric Administration, meanwhile, found that more than 7,000 daily temperature records were broken from June 1 through Sept. 7 across the United States, marking the third hottest summer on record. More than 400 monthly records and 27 all-time records were also broken.

As the world heats up, nearly 3 in 4 U.S. adults are concerned about heat waves’ impact on their communities, according to a Morning Consult survey conducted in mid-August. And roughly a third of the public believes climate change has contributed “a lot” to recent natural disasters.

Respondents were asked how concerned they are about each of the following’s impact on their community: 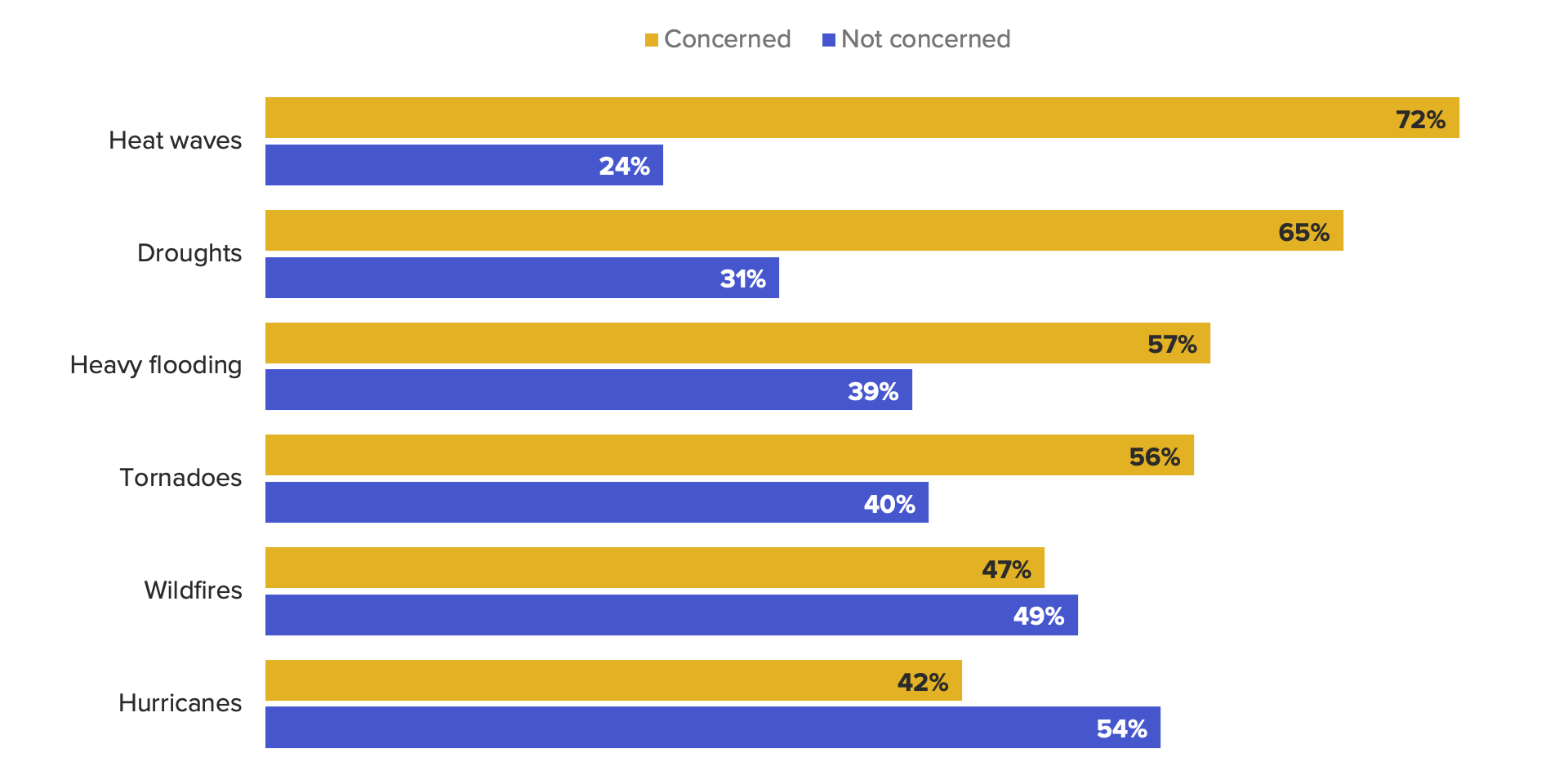 Survey conducted Aug. 16-17, 2022, among a representative sample of 2,210 U.S. adults, with an unweighted margin of error of +/-2 percentage points. Don’t know/No opinion responses are not shown. 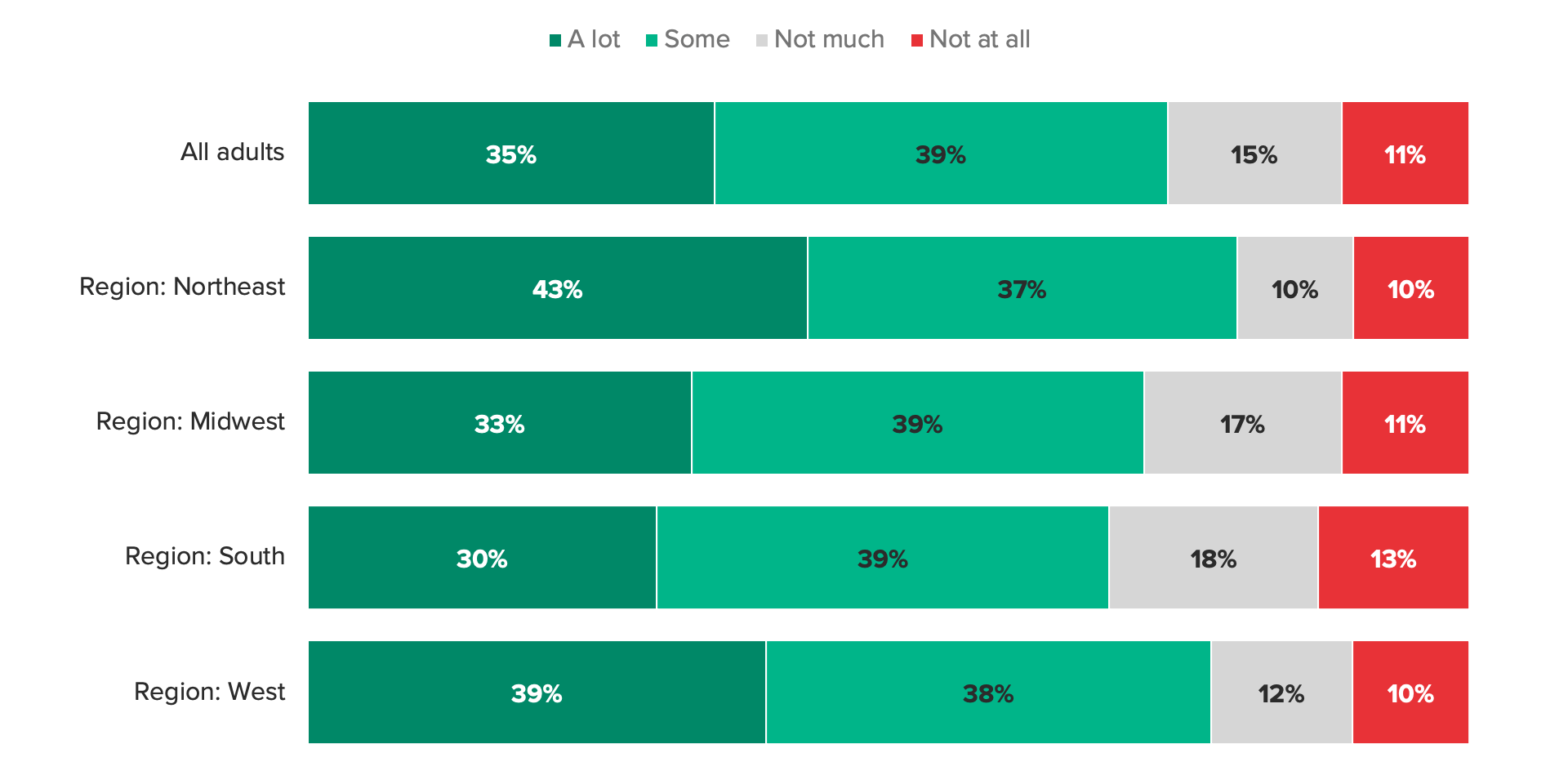 It was so hot this summer that lawmakers in California voted to launch a warning system for heat waves. The first-of-its-kind initiative aims to rank heat events by severity, similar to alerts for wildfires and hurricanes.

The move was part of a package of heat-related bills signed by Gov. Gavin Newsom (D); this one, Assembly Bill 2238, orders the California Environmental Protection Agency to develop the system by 2025.

At the federal level, the National Weather Service is piloting a heat alert system called HeatRisk, as the agency’s heat index may be falling short in its warnings to the public. The new system has four different levels of risk and specifies which populations are most at risk from the heat, similar to Air Quality Index alerts. Over the summer, the Biden administration also launched Heat.gov, a website that provides information about extreme heat and local resources.

People most at risk during heat waves include the elderly, those with preexisting conditions, outdoor workers, those exercising outside, people without access to cooling or hydration, those new to warmer climates and people who are sensitive to poor air quality. Those groups are also more at risk when the power goes out during a heat wave.

California narrowly avoided rolling blackouts during its latest heat wave, which pushed electricity demand to a record high of more than 52 gigawatts. Some credit a power conservation text alert from the state’s Office of Emergency Services for saving the state from having to endure the loss of power.

“California’s issues underscore the fact that we are living with our grandparents’ grid,” said Gregory Wetstone, president and CEO of the American Council on Renewable Energy. “Now is the moment to get our energy infrastructure into the 21st century so it’s better equipped to handle increasingly severe, climate change-induced extreme weather events.” 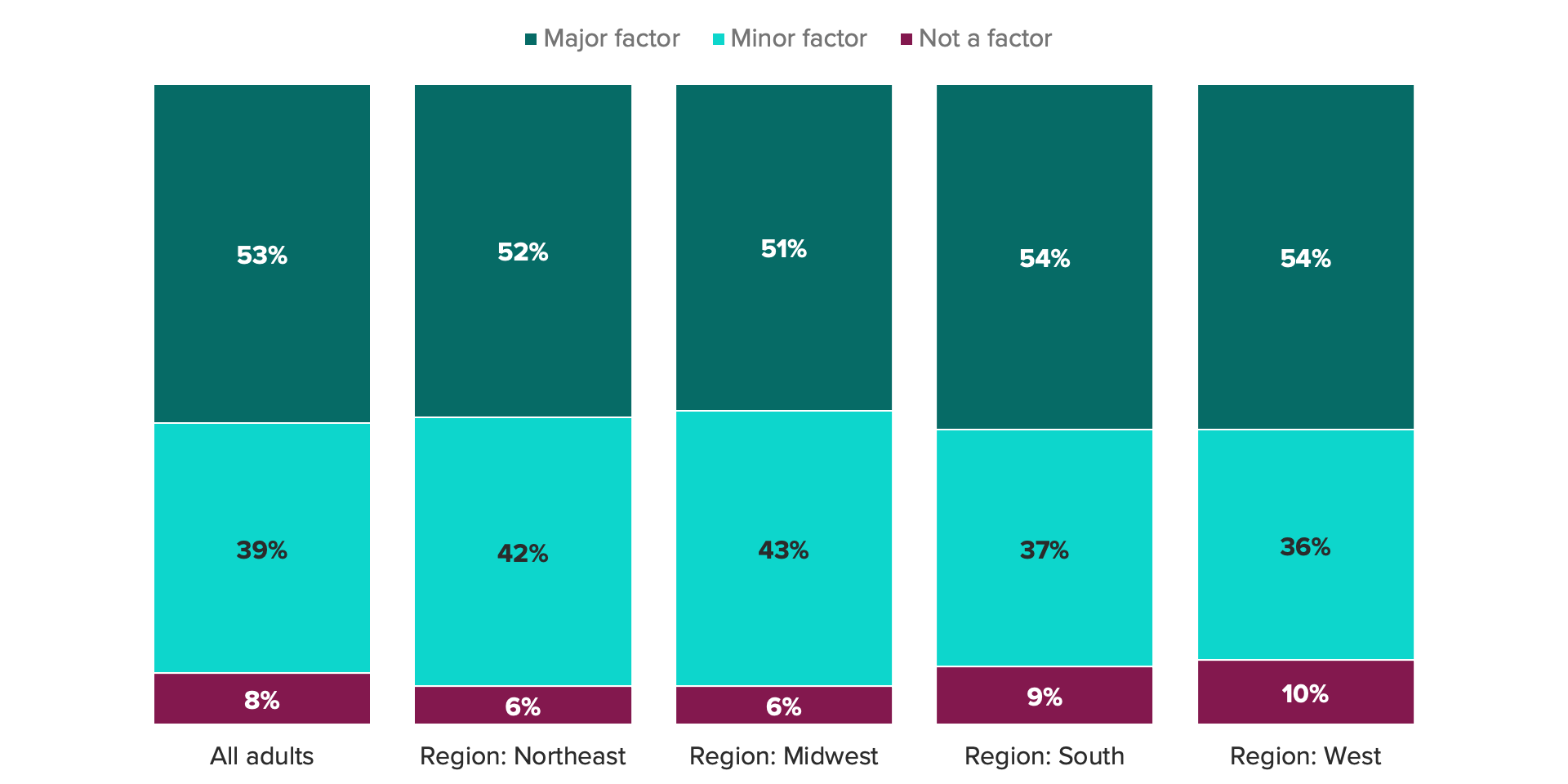 Survey conducted Aug. 16-17, 2022, among a representative sample of 1,602 U.S. adults who said they are concerned with heat waves, with an unweighted margin of error of +/-2 percentage points. Figures may not add up to 100% due to rounding.

Just over half of U.S. adults said possible power outages are a major factor in their concern about heat waves’ impact on their communities, a share that was consistent across all four regions of the country, according to the survey.

And power outages are expected to increase. A recent analysis from researchers at the nonprofit group Climate Central found that about 83% of reported outages between 2000 and 2021 were caused by weather-related events such as wildfires and storms — events expected to intensify in the future from the effects of climate change.

Major power outages increased 64% from 2011 to 2021 compared with the previous decade. Since 2000, Texas has led the nation with the greatest number of outages, followed by Michigan, California, North Carolina and Pennsylvania, Climate Central found.

Those in the West cited droughts (79%), heat waves (77%) and wildfires (74%) as their top concerns, according to the Morning Consult survey. Midwesterners are most concerned about tornadoes (75%), while heat waves are the top concern for those in the South (73%) and the Northeast (71%).

For Western Adults Concerned About Droughts, 7 in 10 Say Water Shortages Are a Major Reason Why 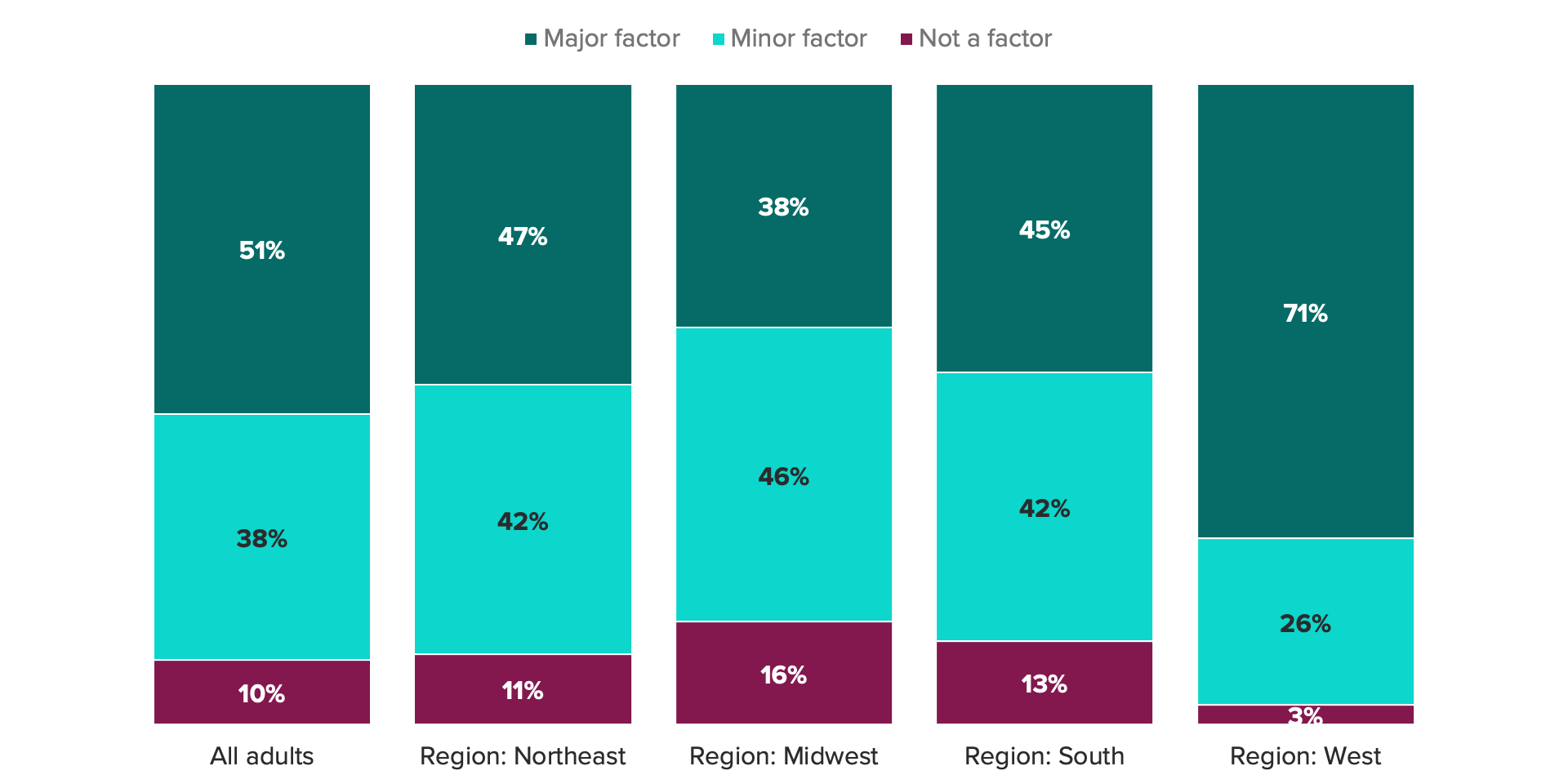 Survey conducted Aug. 16-17, 2022, among a representative sample of 1,429 U.S. adults who said they are concerned with droughts, with an unweighted margin of error of +/-3 percentage points. Figures may not add up to 100% due to rounding.

And as a megadrought grips the West, 7 in 10 adults living in that region said water shortages are a major factor in their concern about droughts’ impact on their communities, easily the highest share of any region. About half of U.S. adults overall said the same.

In California, 7 in 10 voters in the state recently described the water shortage as “extremely serious,” although just 40% said their lives had been directly affected by shortages so far, according to an August poll conducted by the University of California’s Institute of Governmental Studies.

A historic drought this summer brought sweeping water restrictions to more than 6 million people in Southern California. The goal was to slash water use by 35% by only allowing residents to water their lawns once a week.

But if more drastic measures aren’t taken in the Colorado River basin states — Arizona, California, Colorado, Nevada, New Mexico, Utah and Wyoming — officials say the system’s reservoirs could dry up in the next three or four years.