Most Voters Back Federal Marijuana Legalization That’s Stalled in Congress

60% say the use of marijuana should be made legal in the U.S. 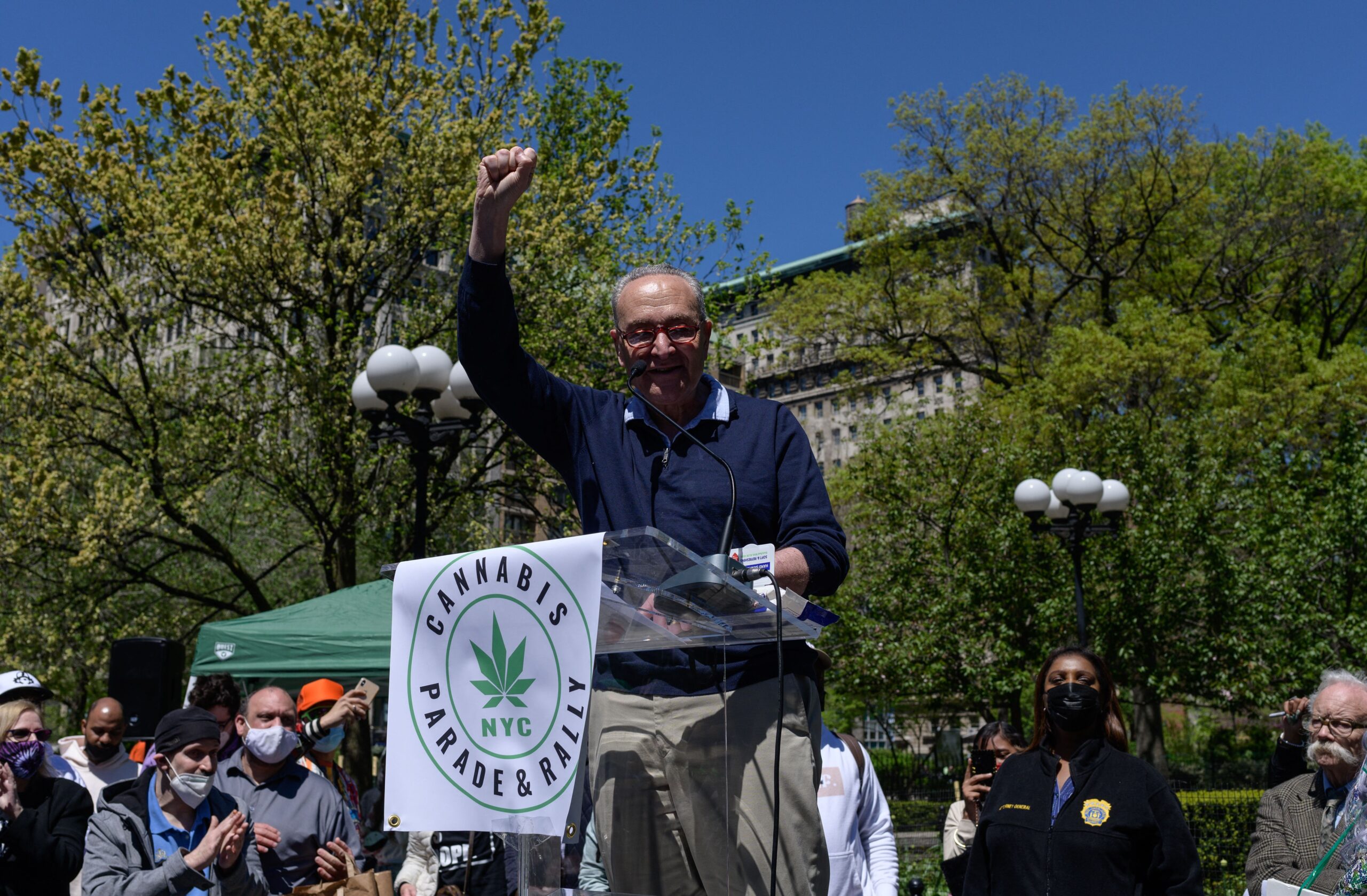 Senate Majority Leader Chuck Schumer (D-N.Y.) speaks in May 2021 during the annual NYC Cannabis Parade & Rally in support of the legalization of marijuana for recreational and medical use. (ANGELA WEISS/AFP via Getty Images)
By Eli Yokley

The Senate left Washington for the campaign season without acting on legislation that would end the federal prohibition on marijuana, leaving what a new Morning Consult/Politico survey shows to be a popular policy proposal on the table ahead of the midterm elections.

3 in 5 Voters Say Marijuana Should Be Legal Nationwide 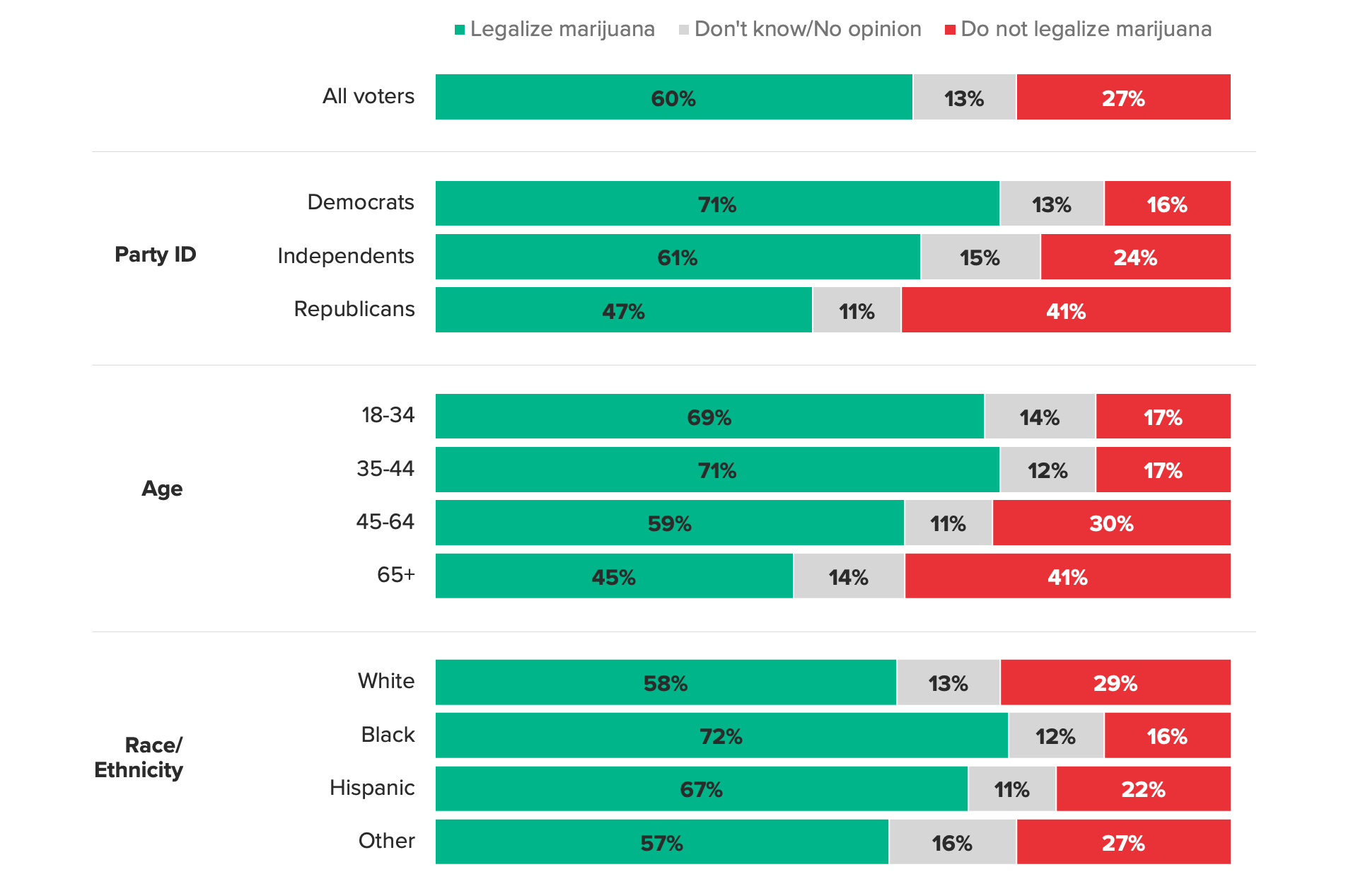 Survey conducted Sept. 30-Oct. 2, 2022, among a representative sample of 2,005 registered voters, with an unweighted margin of error of +/-2 percentage points. Figures may not add up to 100% due to rounding.

Where voters stand on marijuana legalization

The Democratic-led House, in a mostly party-line vote, passed what has been described as a landmark marijuana legalization bill in April. Roughly two-thirds of voters support the move, including the lion’s share of Republican voters — sentiment that has largely been maintained since another House vote in 2020.

But as is the case with issues such as protections for interracial marriage or access to birth control, bipartisan popular support doesn’t always translate into legislative advancement, even as several states will consider their own changes to marijuana laws this fall. On the campaign trail, some Democratic candidates, such as Senate nominee John Fetterman of Pennsylvania, have embraced the legalization issue, potentially motivating voters on the sidelines in his swing state, but many others have minimized it to focus on front-of-mind issues like the economy, public safety and abortion rights.

On Capitol Hill, Senate Majority Leader Chuck Schumer (D-N.Y.) and Senate Finance Committee Chairman Ron Wyden (D-Ore.) gave their backing to the legislative push by Sen. Cory Booker (D-N.J.) to remove cannabis from the Controlled Substances Act and allow states to create their own laws. But that measure did not move in the chamber before lawmakers left town through the midterm elections.

Aside from full-on legalization, which may not have enough support to overcome the Senate’s filibuster rules, there has been bipartisan support this Congress for a bill that would give federal protections to banks that work with marijuana businesses in the states that have taken steps to legalize the drug.

Rep. Ed Perlmutter (D-Colo.) has said the marijuana banking legislation may come up in the Senate after the midterm elections, and Booker said there may be bipartisan support then, suggesting lawmakers may be able to garner enough votes during the congressional lame-duck session for a piecemeal approach to decriminalization.

The latest Morning Consult/Politico survey was conducted Sept. 30-Oct. 2, 2022, among a representative sample of 2,005 registered voters, with an unweighted margin of error of plus or minus 2 percentage points.