Republicans Are Outperforming Their 2018 Margins Among Voters of Color 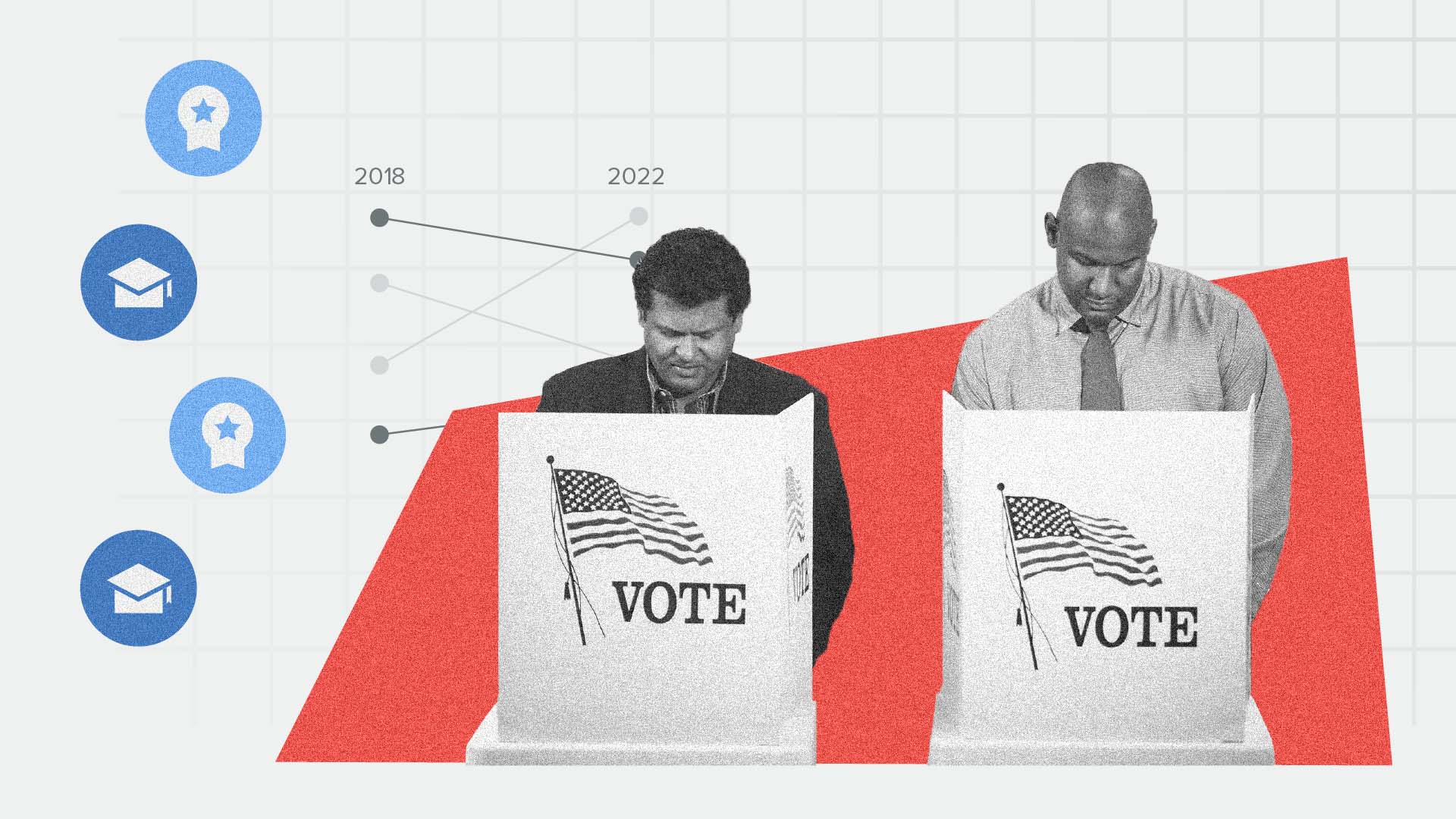 In 2020, the Democratic Party was able to secure enough support from white voters to ward off Republican gains among Black and Hispanic Americans, but a comparison of 2022 and 2018 trend data suggests it’s unlikely to repeat the feat on Nov. 8.

Not only are white voters more likely to back Republican candidates than they were four years ago, but Democrats are also showing signs of attrition among Black and Hispanic voters, which could weigh on their electoral standing — not just next week, but also in 2024’s consequential presidential contest.

“Realignments don’t happen in one election cycle, they happen over decades,” said Mike Madrid, a California-based Republican strategist who has closely studied the Hispanic electorate. “Small marginal changes are what make change and win elections.”

According to Morning Consult Political Intelligence trend data, more Black and Hispanic voters said they plan to support Republican congressional candidates next week than said the same during the 2018 midterm elections. Despite having more favorable views of President Joe Biden than they did of his predecessor four years ago, these voters increasingly plan to support the GOP amid elevated concerns over the economy, which is advantageous political ground for Republicans in the latest cycle.

While Democratic support is clocking in at a similar level as it did four years ago among the various racial and ethnic groups, the shares of Black and Hispanic voters who said they plan to vote for the Republican over the Democratic candidate in a generic ballot test have grown at a similar pace to the GOP’s increasing support among white voters.

political intelligence
Republicans Have Made Gains With White, Black and Hispanic Voters 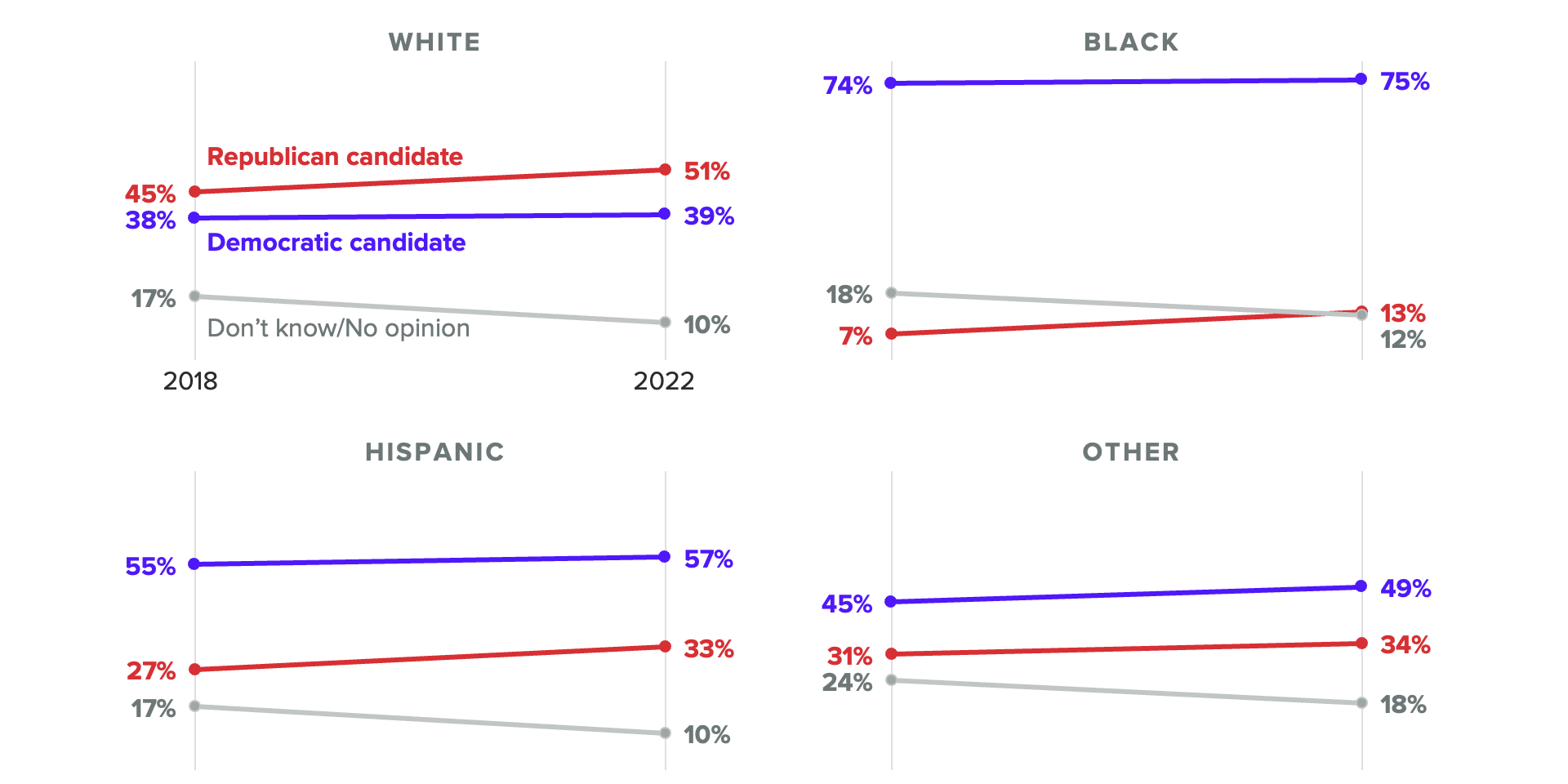 The movement was less pronounced among voters who described their race or ethnicity as American Indian, Asian American or something else, a smaller group that appears to have become a bit more politically engaged this year and which has a more varied political alignment than that of Black and Hispanic voters.

Behind the GOP’s gains among voters of color

The modest growth in GOP support among various nonwhite Americans comes amid an ideological shift: More than whites, these voters have become less likely to identify as liberal since 2017 and more likely to be unsure of their ideology or to identify as moderate or conservative — which is especially true among those without a four-year degree.

But a drift away from the left’s ideology does not automatically equate to GOP votes: Between 2018 and 2022, the Democrats’ advantage on the generic ballot has not fallen proportionally among these voters. While there were double-digit declines in the shares of Black and Hispanic voters without college degrees who identify as liberal, for example, the Democratic Party’s declines among these voters were smaller.

Democratic margin* on the generic ballot

While degreeless voters across the racial and ethnic spectrum were more likely to spurn the Democratic Party’s ideology, the nonwhite voters among them weren’t much more likely than their higher-educated peers to shift toward the GOP.

For example, the share of Hispanic voters without a four-year degree who back Republican congressional candidates this cycle is up 7 percentage points over 2018, compared with a 5-point uptick among Hispanic voters with a bachelor’s degree. Similarly, Black voters — regardless of their education status — have become a bit more friendly to the GOP, though they remain more firmly in Democrats’ camp than Hispanic voters.

Whether Hispanic and Black voters’ meager drift away from Democrats is fueled by educational polarization, traditional midterm dynamics against the party in power, raging inflation or some combination of all three is likely to prove consequential for the outlook of several general elections to come.

“There are more white college-educated voters than noncollege-educated Hispanic voters, so there’s evidence to suggest if that’s the trade, at least for the moment, it’s not a bad trade,” said Madrid. “The math will run out, but by the time that runs out, a million other things will change in the demography in the country.”

Part of nonwhite voters’ shift toward Republican candidates this year may well be attributable to 2022’s issue matrix.

Shares of voters who said the following are their top set of issues when casting their votes for federal office: 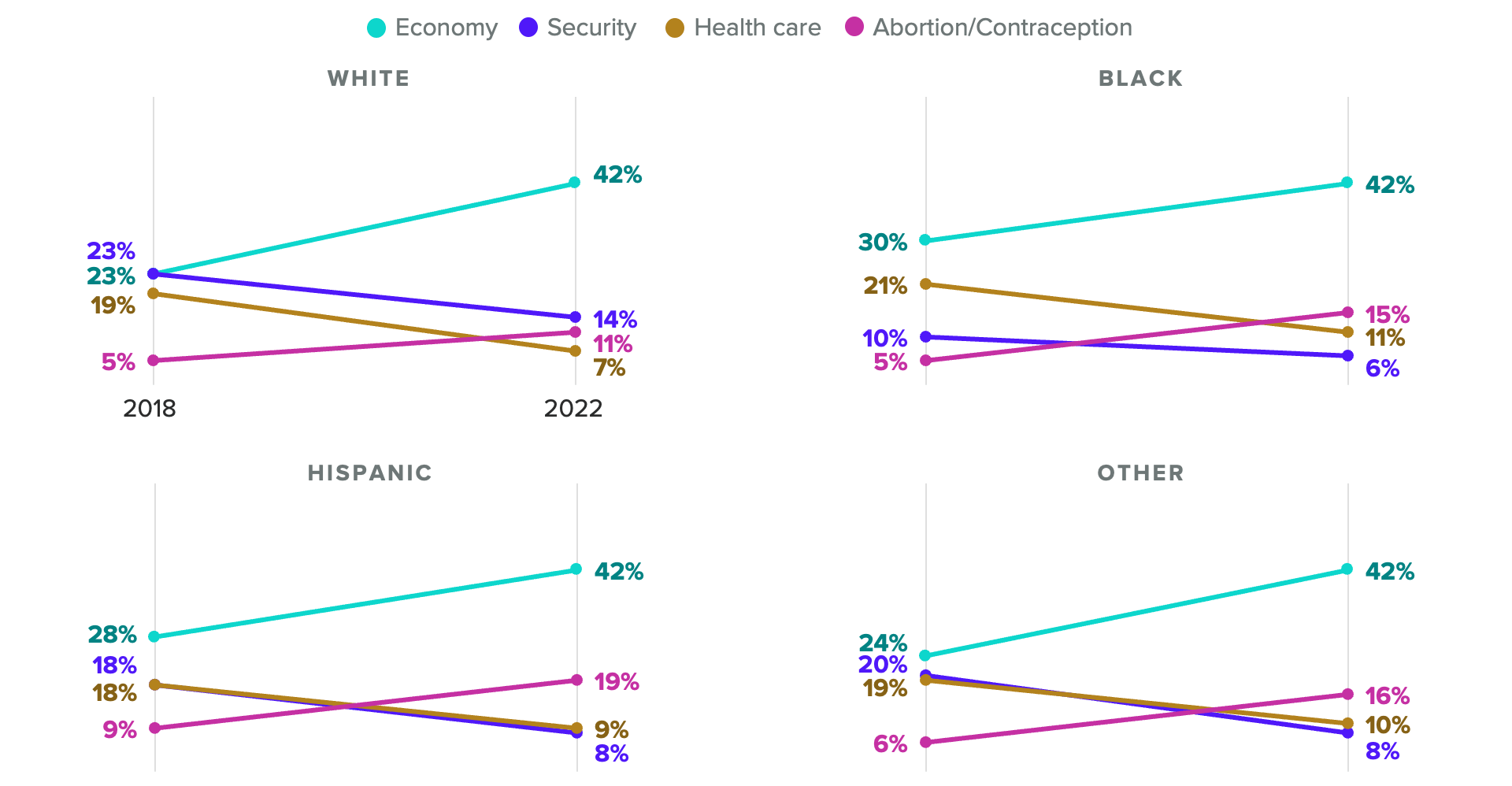 Whereas 2018 was about then-President Donald Trump, health care and immigration, with interest varying a bit by race, this year’s fight is much less about Biden and far more about the economy — the top issue for 42% of voters who are white, Black, Hispanic or something else.

How voters of color feel about the two parties

Republicans are aware of the opportunity to recruit voters of color who had been previously understood as a given for the Democratic Party, a chance that has appeared to improve in recent years even after the rise of less-veiled racist and nativist rhetoric sometimes espoused by Trump and other prominent Republicans.

After Trump made gains for the GOP among nonwhite voters in 2020, the Republican campaign apparatus in Washington joined together with a number of state parties to launch “Operación Vamos,” a project aimed at Hispanic voters in battleground states such as Nevada, where America’s first Latina senator, Democrat Catherine Cortez Masto, is facing a dogged challenge by former Attorney General Adam Laxalt.

María Teresa Kumar, president and chief executive of the political organization Voto Latino, said Democrats continue to be more trusted by Hispanic voters overall. To her point, a Morning Consult/Politico survey conducted Oct. 28-31 found Hispanic voters are more likely to trust Democrats over Republicans to handle a range of issues, including abortion, crime and even the economy.

“The question is whether we’ll make the investment we need in engaging those voters to make sure they have what they need to flex their power,” she said. “We know that when Latinos turn out — especially young Latinos — Democrats win.”

Hispanic voters do appear less engaged this year, both on the whole and in comparison with white voters. More than 3 in 5 (61%) Hispanic voters said they “definitely” plan to vote this year, compared with 73% of whites, mirroring a gap that appeared in surveys of likely voters conducted at a similar time in 2018’s cycle. Hispanic voters (45%) were also much less likely than white voters (60%) to say they were “extremely” or “very” enthusiastic about voting this fall.

A similar dynamic is occurring — albeit to a lesser extent — among Black voters, raising concerns on the left that a core constituency for the Democratic Party may just sit out the contests this fall. Still, early voting numbers from Georgia suggest decent turnout among Black voters in a state that features a Senate contest between two Black men, Democratic Sen. Raphael Warnock and Republican Herschel Walker, and a gubernatorial race between Democrat Stacy Abrams, who is Black, and Republican Gov. Brian Kemp, who is white.

Along with Nevada and Georgia, nonwhite voter support is paramount for winning contests in Arizona, California, Florida and Texas, all of which are pivotal in the fight over control of state legislatures or Capitol Hill — especially the House, where the Democratic majority is in risk of slipping.

Whether Republicans will be able to sustain advancements with voters of color — especially among Hispanics — in the 2024 contest is an open question, but the recent voting trends are on the GOP’s side.

“The agenda that Republicans are pushing isn’t aligned with the needs of our community, but Democrats can’t take Latino support for granted,” said Kumar, whose organization works to mobilize voter registration in Hispanic and Latino communities.

Madrid, who’s writing a book on the “Latinization” of American politics, said the Democratic Party’s hold on at least the bulk of Hispanic voters may be more about negative partisanship than any particular set of issues, especially when competing against the GOP’s populist economic bent.

“They don’t have much economically or culturally in common. They’re just both anti-Republican. That’s a tenuous hold and it doesn’t work for long,” he said. “The party that captures the hearts and minds of a multi-ethnic working class is going to be the dominant party of the next decade — maybe the next generation.”