The Mexican president rejected mass protests against his proposals to change the electoral system as corrupt, classist and racist — but he hasn’t yet grappled with an institution as popular as he is 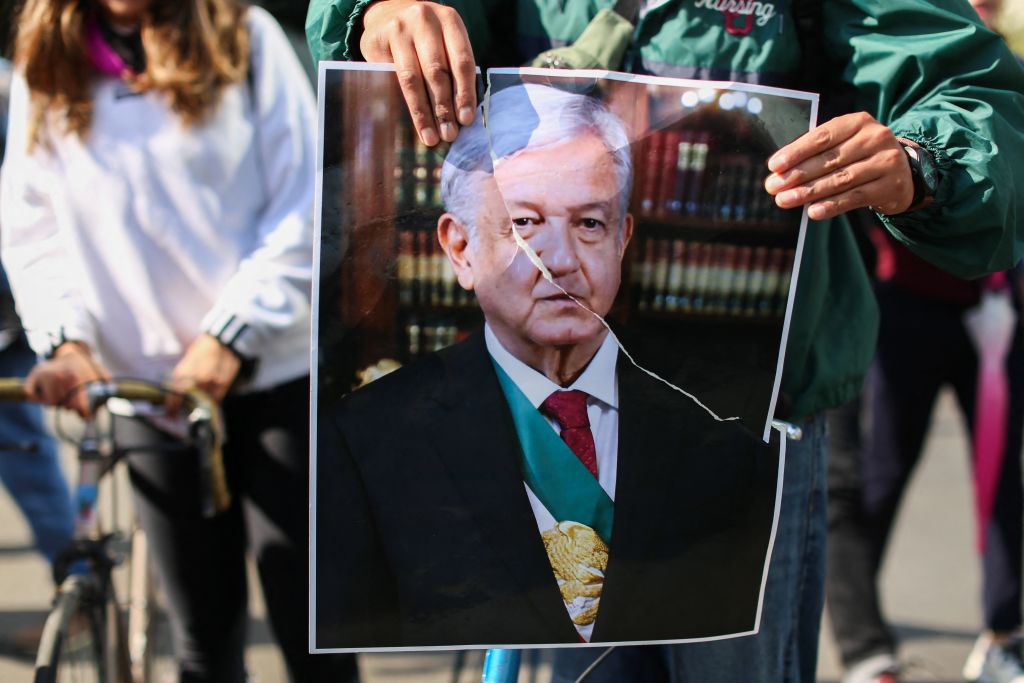 A demonstrator protests against Mexican President Andrés Manuel López Obrador by showing a torn poster with his picture in the vicinity of a Nov. 27 march in Mexico City to commemorate his fourth year in office in Mexico City. (RODRIGO OROPEZA/AFP via Getty Images)
By Matthew Kendrick

President Andrés Manuel López Obrador saw among the largest protests of his term after seeking major changes to Mexico’s election system, but polls show he is no weaker for having gone up against the well-liked National Electoral Institute  – even if he and his party may have to back off some of his most ambitious proposals after a vote to change the constitution failed.

López Obrador, commonly known as AMLO, will be constitutionally barred from holding office after his term expires in 2024. But his Morena party could be put in a commanding position for the 2024 elections if it prevails in pushing through legislation overhauling the electoral process. Winning two-thirds of the federal Congress and simple majorities in state legislatures would give Morena the power to change the Constitution at will, and López Obrador immense behind-the-scenes power. But in attacking the INE, López Obrador may have provided a rallying point for the schismatic opposition.

“The phenomenon of López Obrador is not replicable,” said Mariana Campero, former CEO of the Mexican Council on Foreign Relations and senior associate at the Center for Strategic and International Studies’ Americas program. His potential successors lack his charisma and legitimacy with Morena voters, she said, and will need his support to win and govern.

“The streets have belonged to him for a long time. That’s one of the reasons he was so offended by the demonstration against him, because they succeeded in taking the streets back,” said Campero.

Each data point reflects a seven-day moving average of representative samples of at least 2,026 Mexican adults, with an unweighted margin of error of +/-2 percentage points. “Don’t know/No opinion” responses are not shown.

López Obrador talks about his presidency as the “Fourth Transformation” in Mexican history; a historic event to rival Miguel Hidalgo’s fight for independence from Spain in 1810, the liberal reforms of Benito Juárez and the revolution of 1910. He campaigned on promises to end the privileges of the political establishment, deliver massive public works projects and help citizens who felt ignored by previous governments.

That help has largely come in the form of economic benefits such as cash handouts and gasoline subsidies, and have served to keep López Obrador among the most popular leaders anywhere in the world, according to Jennifer Piscopo, an Occidental College professor who specializes in Latin American elections and politics.

“The social spending that he has done has facilitated a connection to Mexicans who felt that the state traditionally did not reach them,” she said. “The intellectual and political elite may be worried about the erosion of democratic norms, but the improvement in the material situation for lower- and middle-class voters is sufficient to maintain his popularity.”

Opposition parties have had difficulty rallying the public for most of López Obrador’s term. But when the president targeted the INE, he clashed with one of the few institutions in Mexico that can rival his popularity. According to a poll from El Financiero, 61% of Mexicans approve of the INE’s organization of elections.

Many Mexicans see the INE as a check on the consolidated power of establishment politicians and plutocrats. While López Obrador sees himself as a similar check on the system, the president has a history of disputes with the institute stemming from his narrow loss in 2006 to Felipe Calderón, which he still maintains — without evidence — was decided fraudulently.

The INE was established after the infamous 1988 election, during which the PRI party, coming off six decades of one-party rule, claimed a computer crash had stopped the vote count just as it looked favorable for opposition candidate Cuauhtémoc Cárdenas. By the time the PRI-controlled interior ministry claimed to have solved the technical problem, their candidate, Carlos Salinas de Gortari, had pulled ahead.

In order to prevent a repeat of that chicanery, the INE uses independent experts to oversee the process who serve 9-year terms that don’t align with presidential terms. It also recruits ordinary citizens to manage individual polling places as a civic responsibility, similar to jury service in the United States. Representatives from all parties monitor every step of the process and the system has proven resilient in returning free and fair elections despite challenges such as increasing political violence and a lack of infrastructure in rural regions.

López Obrador’s proposed changes would reduce the terms of service for INE election overseers to 6 years — the same length as the country’s presidential term — and make the positions directly elected, increasing their exposure to partisan political pressure, according to Campero.

López Obrador’s “Plan B” package passed by the Chamber of Deputies would also reduce the budget of the INE and give the federal government more control over expenditures.

“Elections are a process Mexicans actively participate in, and the INE is the only institution in Mexico which has such high approval,” Campero said. “That’s why we had the outpouring of the people that we saw: It was really not against proposed changes to the law, it was not a march against the president, much less in favor of somebody else. It was a demonstration of how important Mexicans believe this institution is for our own democracy.”

But the real value of such a public demonstration against the president may have been to show members of the opposition that their own voters would not tolerate cooperation with the administration on this issue. Morning Consult trend data shows López Obrador hovering around a 42% approval rating among PRI voters, for example, which has been enough to make some lawmakers see the value of cooperation in the past.

“This demonstration sent a very clear message to the other parties of the risks they would run if they vote in favor of this reform, as they did, for example, when the PRI voted with AMLO in favor of the militarization of public works and other aspects of civil society,” Campero said.

Whether that message was received by López Obrador remains up for debate. When he organized a Nov. 27 countermarch, state and local officials from his Morena party paid to transport thousands of people to the capital, and the event was cast as a celebration of the president’s achievements in office rather than a rally for any specific policy.

The constitutional changes were seen as sufficiently threatening to Mexican democracy to draw a rare, if mild, rebuke from the U.S. State Department. Just don’t expect it to go any further than that, as Washington has little to gain from antagonizing its second largest trade partner and few tools at its disposal, said Carin Zissis, editor-in-chief of Americas Society/Council of the Americas Online.

But López Obrador may have his eyes set much further ahead. The three top contenders to succeed López Obrador appeared prominently at his countermarch, each hoping to catapult into the National Palace on the back of the machine he built. They look likely to embrace his fight against the INE, and a dominant performance two years from now could provide Morena with the legislative majorities it would need to force through constitutional changes.

Campero of CSIS said none of that trio can replicate López Obrador’s connection to ordinary Mexican voters and will face a tougher fight, particularly if the opposition can somehow rally around a single candidate in opposition. Strengthening the party may be easier for future Morena candidates if the statutory changes to the INE can survive court challenges — and make constitutional changes all the more tempting if they can’t.

“Morena is less than a decade old and it is tied up very much in López Obrador’s personality. So what happens after 2024 when he’s no longer in a seat of power? How visible is he going to be?” asked Zissis. “He may not be in office, but he’s not looking to disappear.”