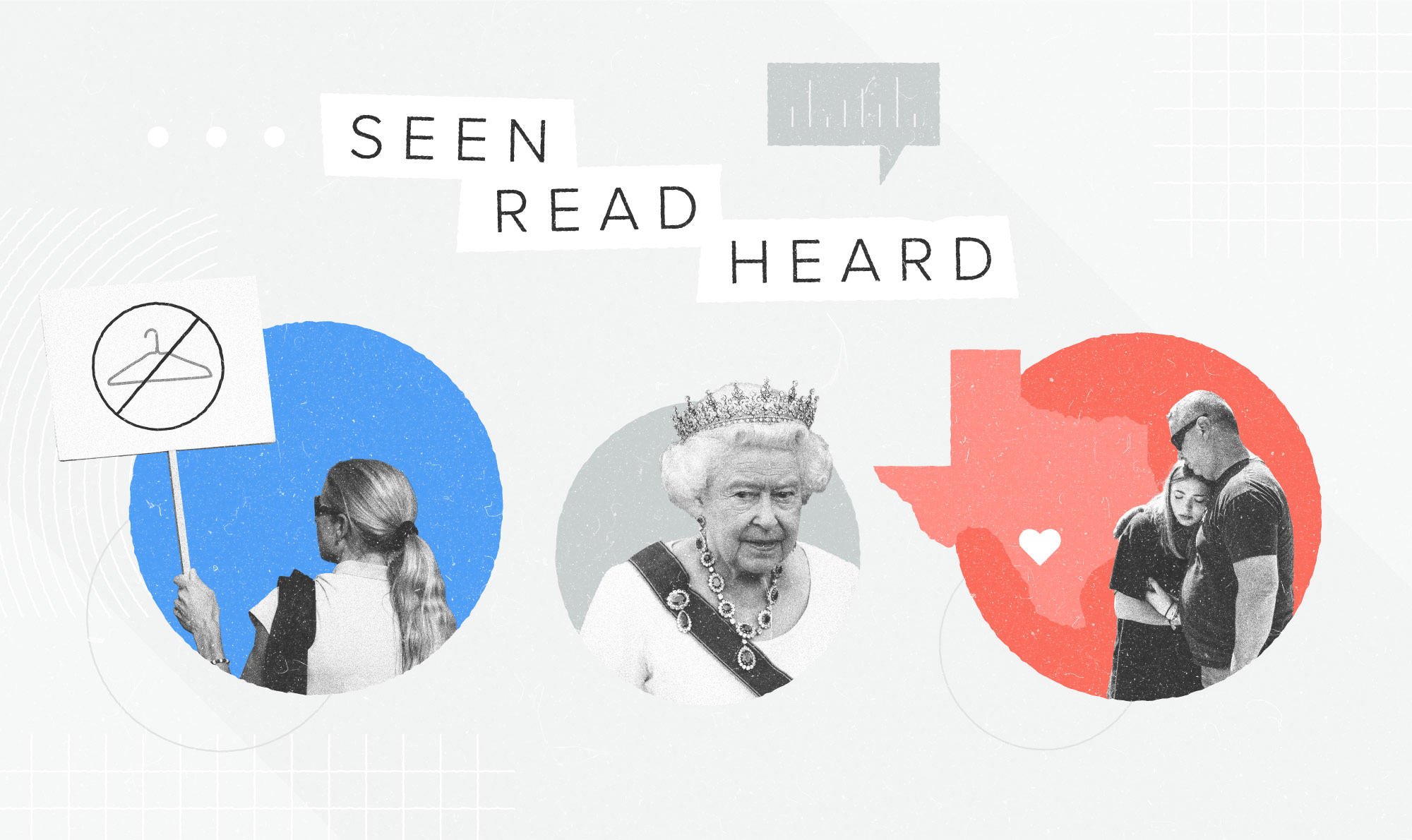 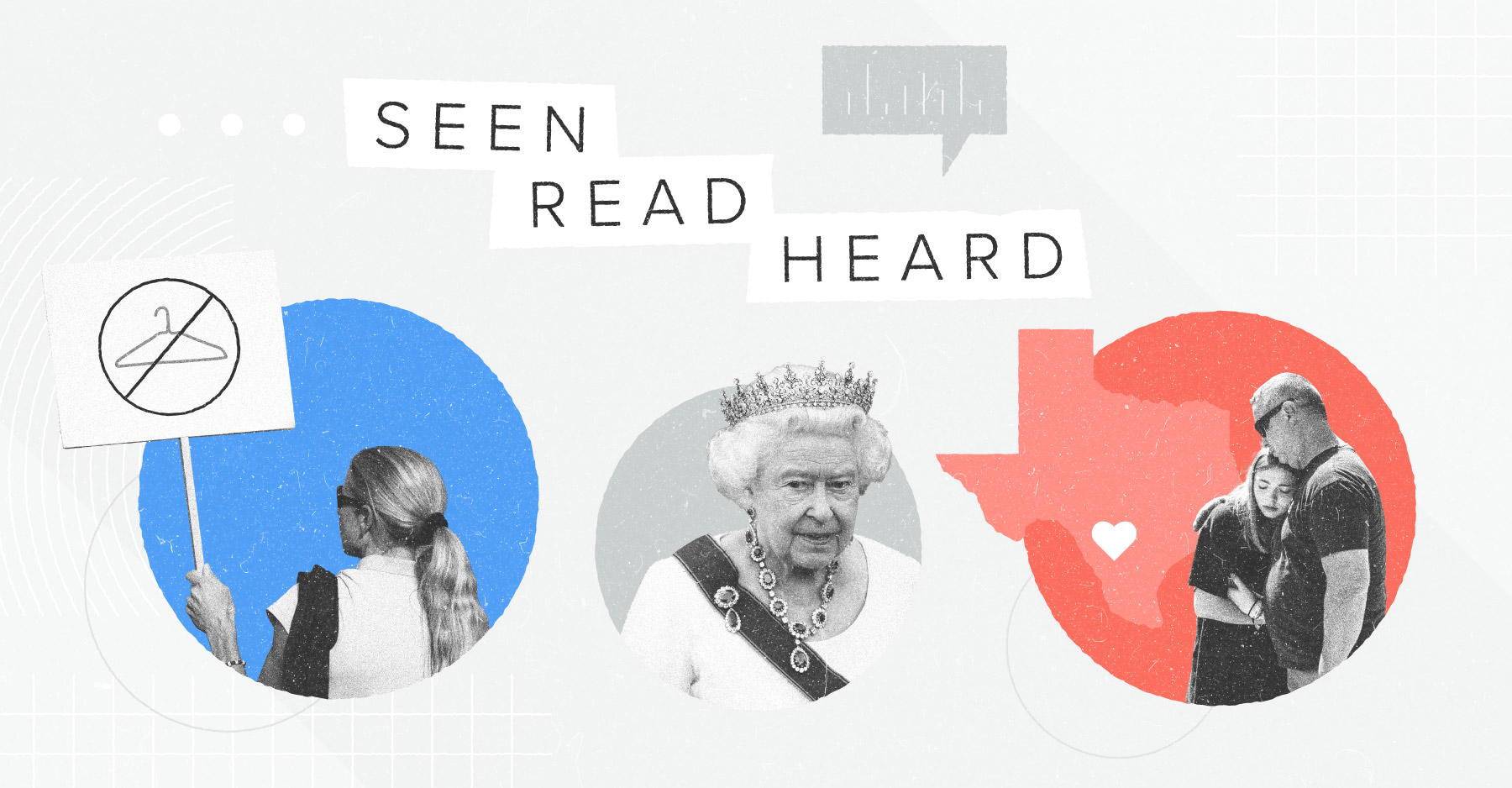 Analyzing the News That Broke Through in 2022

Uvalde shooting, Dobbs decision and the queen’s death were the most salient news events of 2022

In a year that featured economic discomfort ahead of consequential midterm elections as Americans began to emerge from the COVID-19 pandemic, largely dismal economic news that threatened the Democratic Party’s grip on power in Washington was overshadowed by major headlines on mass shootings and the Supreme Court’s dismantling of Roe v. Wade.

That’s according to data collected throughout the year by Morning Consult, which chronicled public awareness in real time about more than 800 news events in weekly surveys of more than 200,000 registered voters. Taken together, voters’ responses highlight the same partisan gaps in news consumption measured since 2018, though news stories, on average, continue to find a smaller audience.

This project — the fifth edition of Morning Consult’s annual gauge of contemporaneous news awareness — analyzes the share of voters who said they had seen, read or heard “a lot” about the various news events at the time of their occurrence. The original list was culled to just over 140 — to be sure, a subjective exercise that sought to elevate meaningful stories, big and small, in politics, policy, industry and culture, both in America and across the globe. (See the interactive here.)

More voters (73%) reported seeing, reading or hearing a lot about the May 24 mass shooting at an elementary school in Uvalde, Texas, in the days after the tragedy, making it the most salient news event of the year. That was followed by the Supreme Court’s June decision in Dobbs v. Jackson Women’s Health Organization to overturn its 50-year precedent that had ensured abortion rights nationwide, and the death of Queen Elizabeth II in September, each at 71%.

The Most Salient News Events of 2022

Share of voters who saw, read or heard “a lot” about the following news events at the time of their occurrence:

Those headlines — which earned an enormous amount of news coverage for multiple days — reverberated much more than the average news event this year, the resonance of which was at its lowest point in five years of surveys.

Average annual share of voters who saw, read or heard “a lot” about dozens of news events tested over the past five years

Annual averages come from weekly surveys conducted among representative samples of roughly 2,000 registered voters each, with unweighted margins of error of +/-2 percentage points.

On average, 29% of voters said they had seen, read or heard “a lot” about the events considered in the 2022 analysis, compared with a 39% high in 2018. The share of voters who heard a lot about events mentioning President Joe Biden (26%) is down from 36% during his first year in office, compared with 30% who heard a lot about Trump-related news this year — another tracking low since 2018.

The partisan gaps in news awareness

Along with the overall electorate, news stories involving Trump were more resonant than those involving Biden this year, both with Republicans and Democrats, comprising a continued and consistent theme in Morning Consult surveys: Democrats tend to be more likely than Republicans to report hearing negative news about their standard-bearer.

For example, Democrats were 22-percentage-points more likely than Republicans in June to say they heard a lot about former White House aide Cassidy Hutchinson’s testimony on Trump to the House’s Jan. 6 committee, similar to the 17-point gap on the resonance of news that the former president held a dinner with white supremacist Nick Fuentes and Ye, the artist formerly known Kanye West.

The biggest partisan divide on awareness regarded Ye’s comments on Alex Jones’ “Infowars” show, when he expressed appreciation for Nazi leader Adolf Hitler: Democrats (44%) were more than twice as likely as Republicans (18%) earlier this month to say they heard a lot about those remarks.

Share of voters who saw, read or heard “a lot” about the following news events at the time of their occurrence:

In the inverse, the largest partisan gap in Republicans’ favor on news consumption came when voters were asked how much they had heard about Biden’s hot-mic moment in January, when he called Fox News reporter Peter Ducey a “stupid son of a b—-” in response to a question about inflation’s impact on the midterms. While 41% of Republicans said they heard a lot about that, only 27% of Democrats said the same.

Republicans were also consistently more likely than Democrats to report hearing negative news about the economy, such as monthly reports detailing rising inflation or September’s increase in the price of gas, or developments involving migrants at the U.S.-Mexico border.

Related: Hurricanes and Gasoline Prices Were the Energy Stories That Captured Voters’ Attention Most in 2022

This isn’t to say every story fell into a partisan bubble. While Republican voters do generally report hearing less about the average news event, many of the events that rise to the top are similar on both sides of the aisle.

The Most Salient News Events, by Party

Shares of voters who saw, read or heard “a lot” about the following news events at the time of their occurrence: 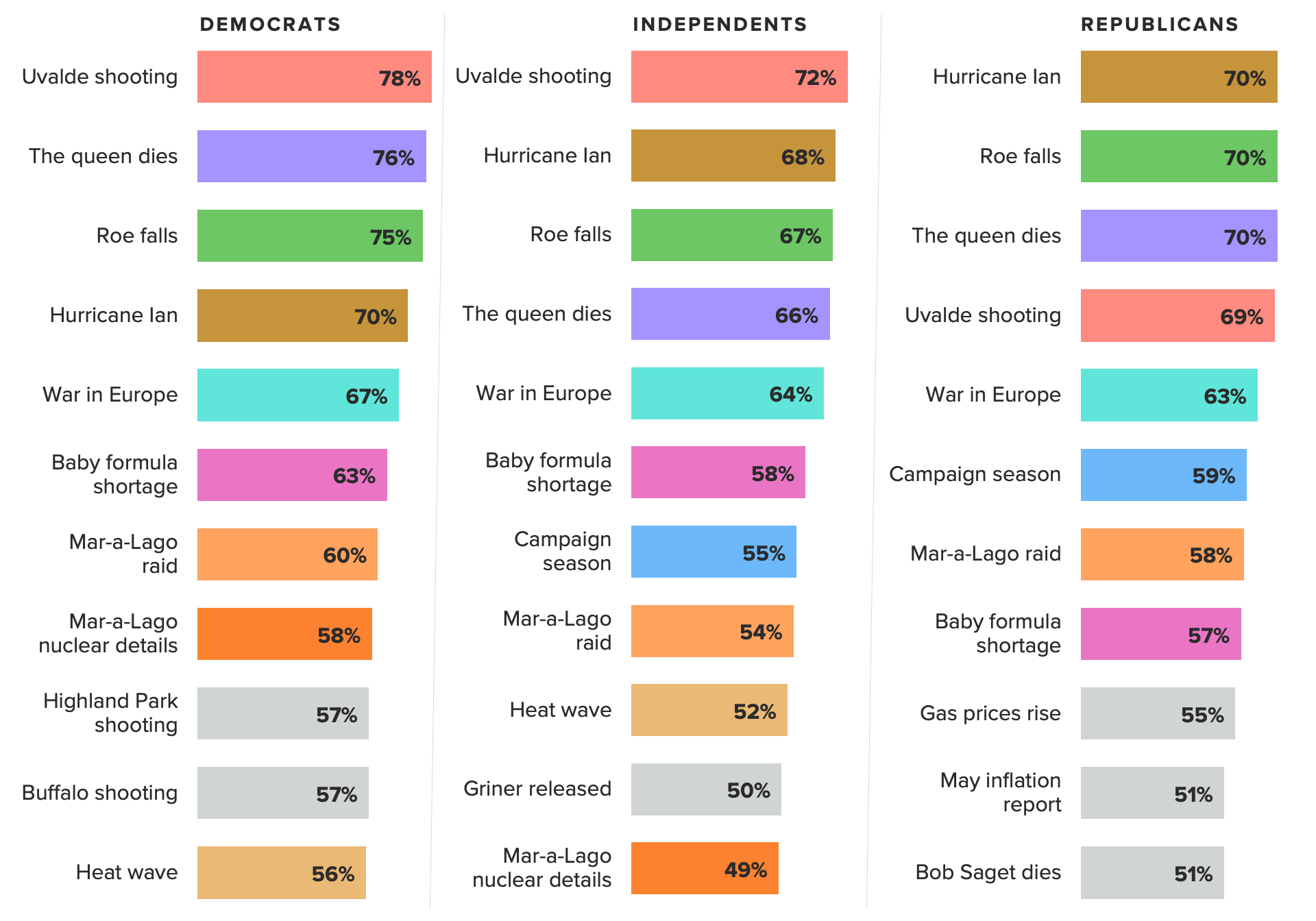 The FBI’s execution of a search warrant at Mar-a-Lago, for example, broke through to similar shares of Democrats and Republicans, as did Russia’s invasion of Ukraine or the baby formula shortage. On the other hand, economic events made it to the top of the list among Republican voters, while mass shootings in Highland Park and Buffalo were among Democrats’ most-heard-about events.

It is almost cliché now to say “Twitter isn’t real life,” but some things that drove conversations online — particularly in Washington — had limited reach among the U.S. electorate.

The News Events That Didn’t Break Through in 2022

Share of voters who saw, read or heard “nothing at all” about the following news events at the time of their occurrence:

A similar share (48%) didn’t hear anything about pop star Lizzo playing James Madison’s crystal flute during a concert in the nation’s capital, an act that incited some anger on the right.

More meaningful occurrences, such as the death of Rep. Don Young (R-Alaska) or a knife-wielding man attempting to harm Rep. Lee Zeldin at a gubernatorial campaign event in New York, also had limited resonance — as did the demise of Warner Bros. Discovery’s CNN+ and tennis champion Roger Federer’s retirement.