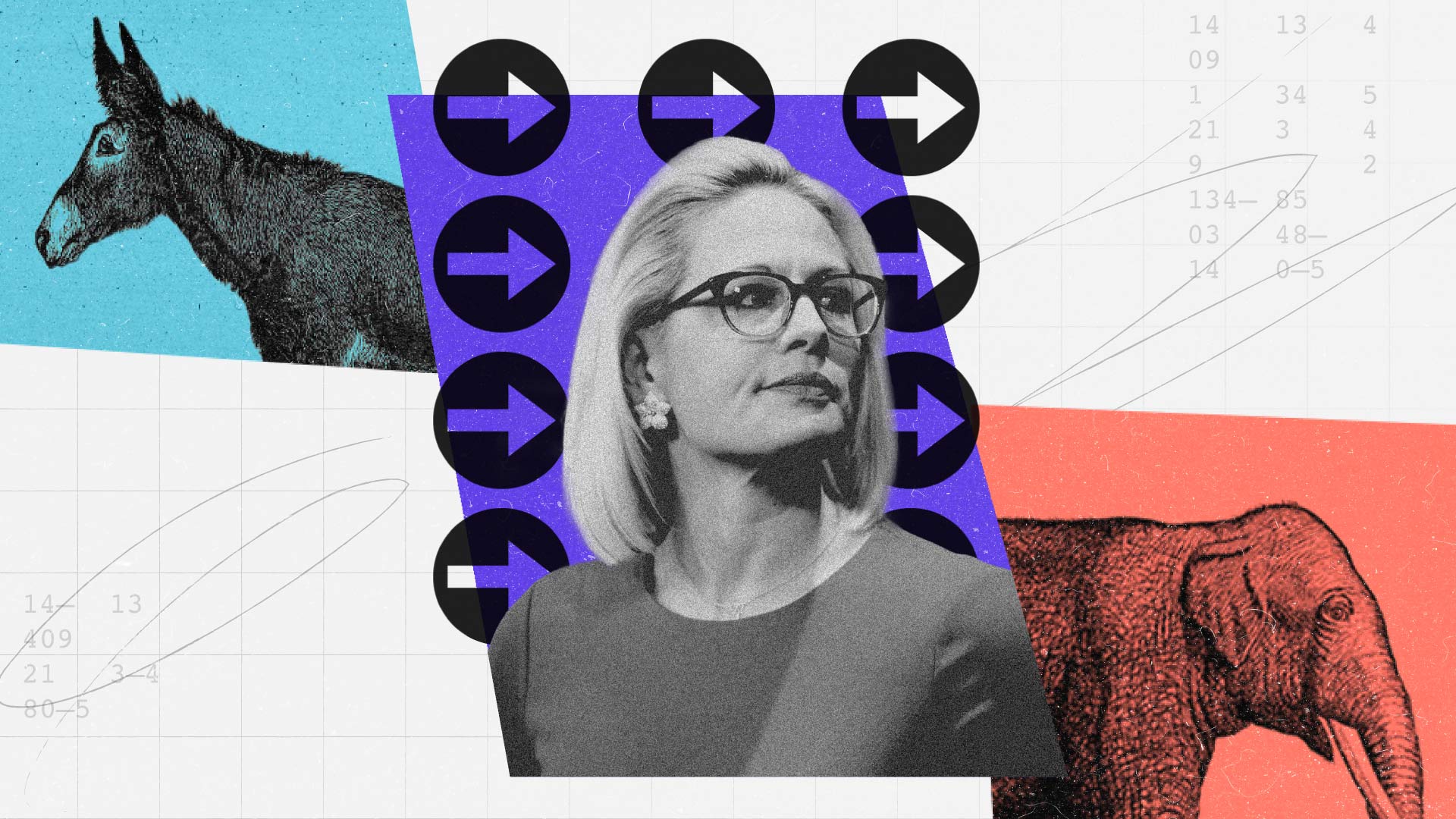 Arizona Sen. Kyrsten Sinema continues to rank among America’s most unpopular senators following her departure from the Democratic Party, according to Morning Consult Political Intelligence tracking in all 50 states.

But less than two years out from a potential 2024 re-election campaign, surveys conducted after she announced her decision to become an independent reveal a coalitional shift that’s made her more popular with Arizona’s unaffiliated and Republican voters but hastened her descent with the state’s Democrats.

Arizona voters were asked if they approve or disapprove of Sen. Kyrsten Sinema’s job performance, before and after she switched her party affiliation 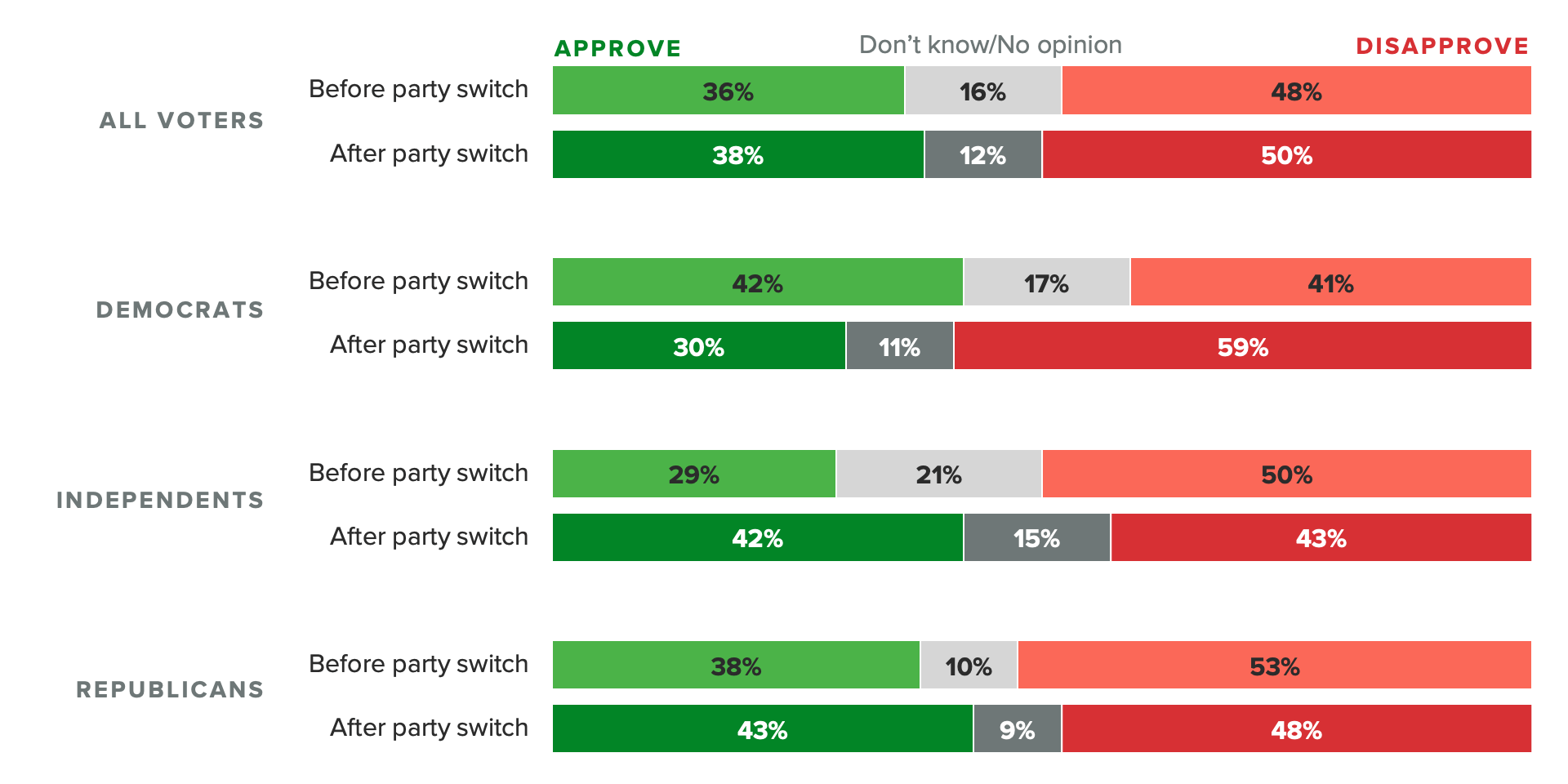 Following Sinema’s Dec. 9 declaration that she was separating from the Democratic Party, her overall approval rating only moved marginally. But among Democrats in her state, whose national apparatus helped her flip a seat in the 2018 midterm elections, Sinema’s disapproval rating climbed 18 percentage points, to 59%.

Over the same time period, her approval rating spiked among independents (from 29% to 42%) and Republicans (from 38% to 43%), leaving her with mixed reviews among those groups.

Even before Sinema’s exit from the party, Arizona Democrats were divided over her job performance — enough to make her the least popular Democratic senator among Democratic voters in the fourth quarter of 2022, and especially vulnerable to the kind of primary challenge that was apparently in the works by Rep. Ruben Gallego.

Should Sinema seek re-election as an independent next year, political strategists in the state believe the weight of her new standing among Arizona Republicans and independents — a handy asset — will likely come down to whether the state GOP elevates a candidate with broader appeal or reaches for the extreme as it did with nominees for statewide offices such as governor and Senate in 2022.

Some Republicans in Arizona see Pinal County Sheriff Mark Lamb or 2022 Republican Senate nominee Blake Masters as potential contenders to appeal next year to the GOP’s rightward flank, while Karrin Taylor Robson, who ran unsuccessfully for governor in 2022, and state Treasurer Kimberly Yee are being eyed by those looking for a candidate with broader appeal.

How Sinema stacks up against the rest of the Senate

The latest quarterly rankings, based on surveys conducted Oct. 1-Dec. 31 in each state, show Sinema as one of the five most unpopular senators, along with another chief liberal agitator, Sen. Joe Manchin of West Virginia, who is also up for re-election next year. The moderate Democrat has seen his own standing at home wax and wane on both sides of the aisle since early 2021 as he went from stalling President Joe Biden’s domestic policy package to ultimately supporting the Inflation Reduction Act.

*Denotes senator has retired. Most popular and unpopular senators are ranked by the largest approval and disapproval shares, respectively. Net approval rating — the approval share minus the disapproval share — is used to break ties.
Surveys conducted Oct. 1-Dec. 31, 2022, among representative samples of registered voters in each state, with margins of error of +/-1 to 5 percentage points. Figures may not add up to 100% due to rounding.

Manchin’s unpopularity at home is only eclipsed by Senate Minority Leader Mitch McConnell (R-Ky.), the ubiquitous holder of the title of America’s most unpopular senator who clocked a 64% disapproval rating in the fourth quarter of 2022.

At the other end of the spectrum, John Barrasso of Wyoming, chairman of the Senate Republican Conference, is the country’s most popular senator, with a 66% approval rating. He’s followed by Senate Republican Whip John Thune, Vermont Democrat Patrick Leahy, who has retired, and Senate Budget Committee Chairman Bernie Sanders (I-Vt.). Each second-place contender had an approval rating of 64% among voters in their states.

More on 2024’s most vulnerable senators

Arizona’s and West Virginia’s respective souring on their senators up for re-election next year stands largely in contrast to public sentiment elsewhere about vulnerable incumbents.

In Virginia, the past couple years have taken a bit of a toll on Democratic Sen. Tim Kaine, though voters there are more likely to approve than disapprove, 43% to 39%, of his job performance. Ohio and Pennsylvania voters, too, are more likely than not to give positive marks to Democratic Sens. Sherrod Brown (43%) and Bob Casey (42%), while Tammy Baldwin in Wisconsin and Jacky Rosen of Nevada (the most unknown senator up for re-election next year) are both continuing to tread water, with approval ratings that nearly match their disapproval ratings.

Quarterly net approval* ratings of the following senators among registered voters in each state: 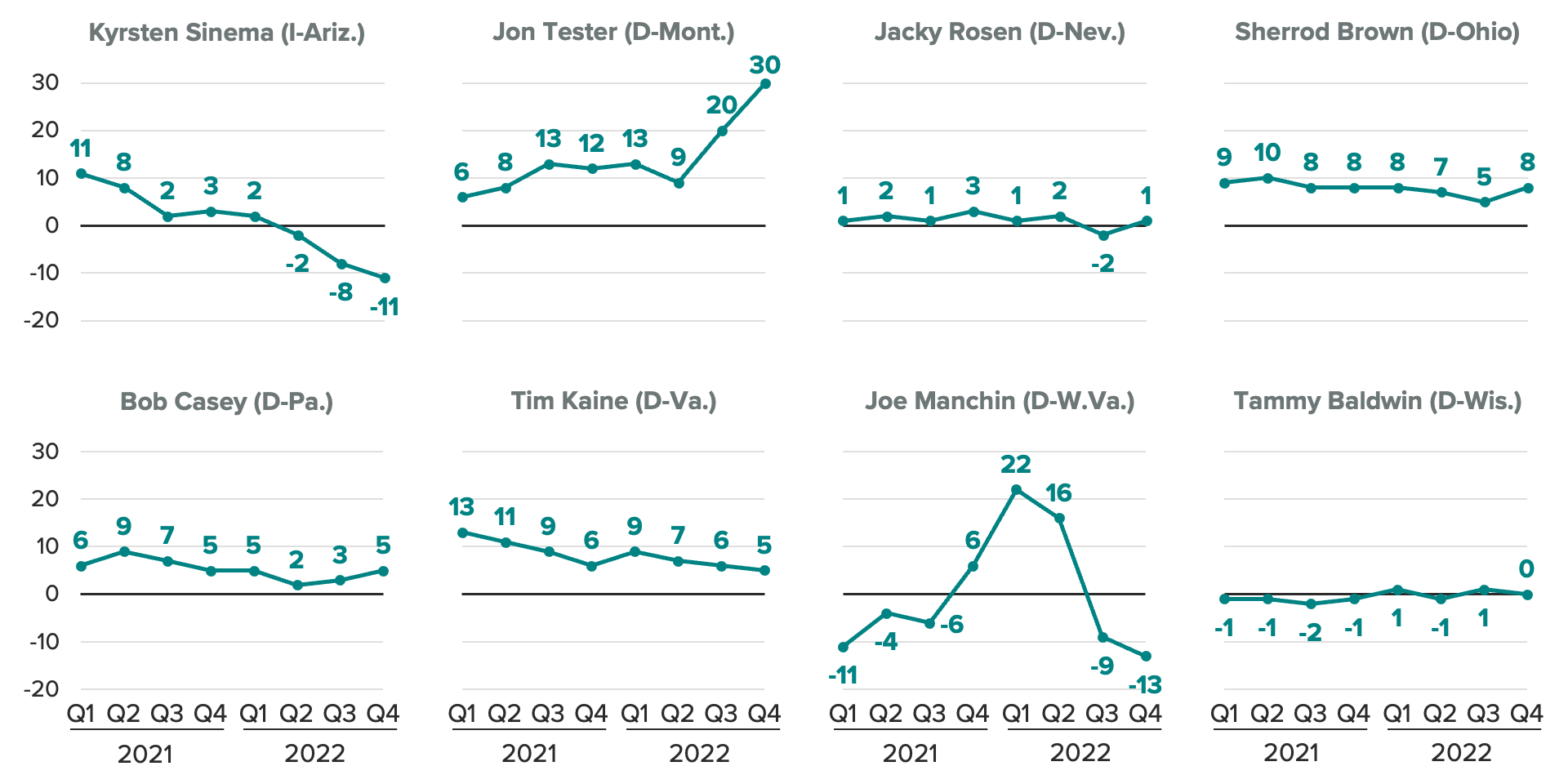 *Net approval is the share who approve minus the share who disapprove.
Quarterly surveys conducted in 2021 and 2022 among representative samples of registered voters in each state, with unweighted margins of error of +/-1 to 4 percentage points.

And then there’s Montana, a state with a not-so-distant bipartisan voting history that has swung further to the right in each presidential contest since 2012. Democratic Sen. Jon Tester has not yet said whether he’ll run next year, but with a 60% approval rating, he is the most popular incumbent who would face a tough 2024 contest if he decides to mount another campaign.

Since Biden took office in 2021, Tester’s approval rating has improved 12 points, driven largely by a surge in support in recent months among independents: 65% of unaffiliated voters approve of Tester’s job performance, the highest rating among that group of any other senator during the fourth quarter of 2022.

Along with Tester’s strong marks from independents, he also has solid backing from Montana Democrats — stronger, in fact, than any other Democrat who faces re-election next fall.

Share of Democratic voters in each state who strongly or somewhat approve of the following senators’ job performance:

Nine in 10 Montana Democrats approve of Tester’s job performance, including two-thirds who do so “strongly.” Sens. Amy Klobuchar of Minnesota (84%) and Chris Murphy (82%) round out the top 3.

Manchin, with a 53% approval rating among Democrats, is the weakest Senate Democrat with his own party’s voters. If he chooses to seek re-election, however, he is unlikely to face a serious primary challenge, given his unimpeachable record of victories in a state that has continually trended more Republican.

Electability in a general election is not a major concern for the Senate’s Republican incumbents next year given that most competitive contests fall in territory occupied by incumbent Democrats. For Senate Republicans, the larger concern heading into 2024 are the primaries, and for now, most of them appear on solid ground.

Share of Republican voters in each state who strongly or somewhat approve of the following senators’ job performance:

Only Sen. Mitt Romney (R-Utah), the GOP’s 2012 presidential nominee who voted twice to convict then-President Donald Trump during his impeachment trials, looks in trouble on the right.

Just 41% of Utah Republicans approve of Romney’s job performance, compared with 54% who disapprove. As he weighs a re-election campaign, that leaves Romney only slightly more popular than he was in the wake of Trump’s second impeachment trial in the first quarter of 2021.

Margins of error for responses from all voters in each state range from 1 to 5 points. For more detailed information, you can download the 50-state data set for senator approval ratings among all voters here.