Media & entertainment analyst Kevin Tran explores why video streaming services still need to fight for Oscar wins, even in an era that prioritizes profitability over prestige 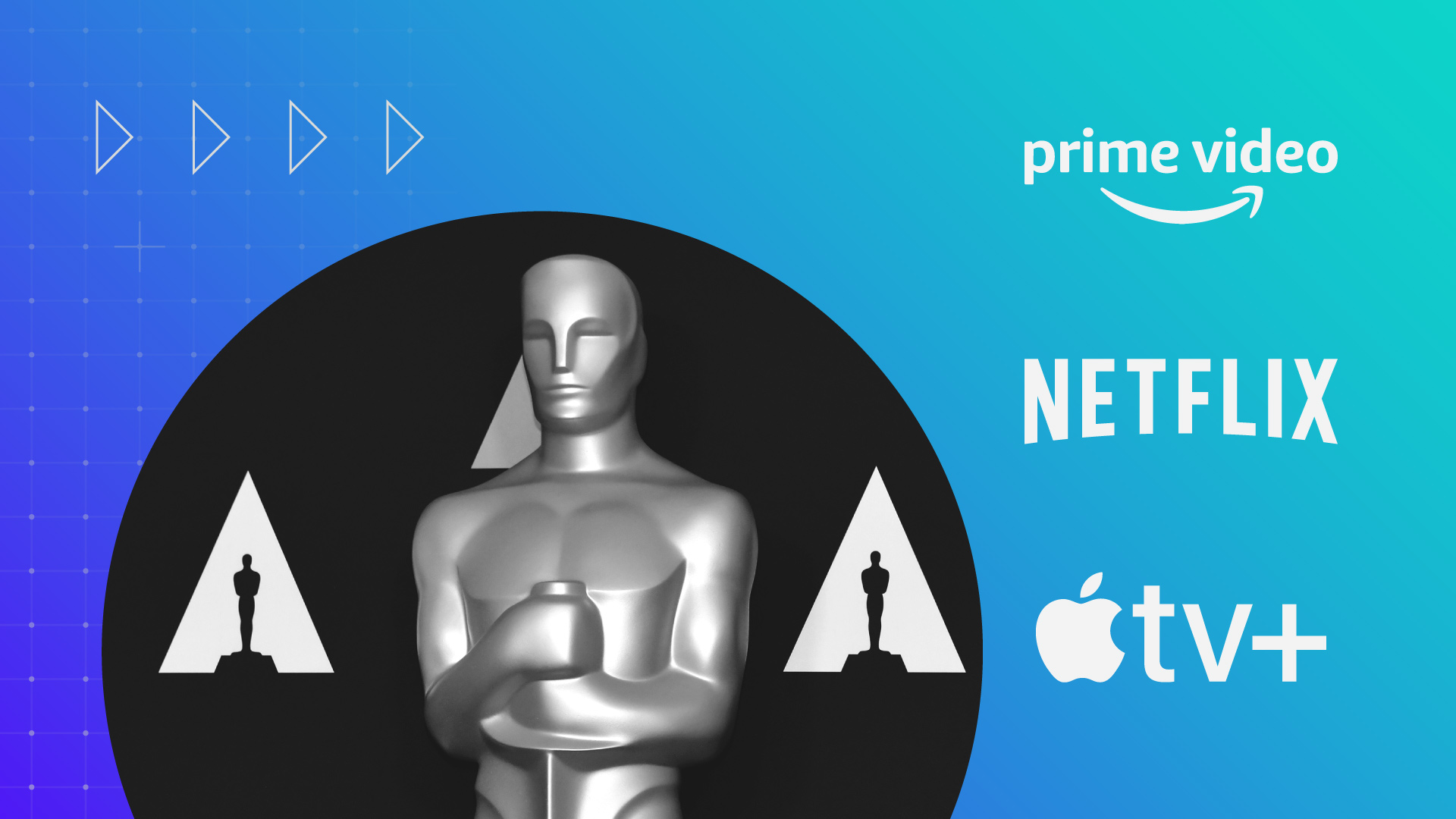 While the Academy Awards — nominations for which are announced tomorrow — regularly spotlight the industry’s most innovative films, more recently they’ve become a measuring stick for the progress of video streaming services’ conquering of Hollywood. For example, Apple TV+ became the first streamer ever to win Best Picture last year for “CODA,” five years after Prime Video became the first to be nominated for that award.

But streamers may end up remembering this year’s Oscars for more somber reasons. The current Best Picture front-runners are overwhelmingly from traditional studios, and streamers seem poised to exit this year’s Academy Awards relatively empty-handed.

Streaming services should be concerned about a particularly light Oscar haul, as new Morning Consult data shows that consumers who care about the Oscars are much more lucrative customers than those who don’t: 25% of those who make at least $100,000 annually said in January that they “usually” or “always” watch the Oscars, while only 15% of those who make less than $50,000 a year said the same. So even though only a select portion of consumers care about Oscar wins, it’s still important to fight for the prestige crowd, given that they punch above their weight in revenue generation.

January data shows that 35% of U.S. adults plan on watching this year’s Oscars ceremony on March 12, although only 17% said they “usually” or “always” watch the Academy Awards. While those figures show that Oscars devotees are scarce, media companies should also note that 19% of those who usually or always watch the awards show said they spent more than $60 on streaming subscriptions in the past month, higher than the share of adults overall (14%) who said the same.

Amount respondents spent on video streaming subscriptions in the past month 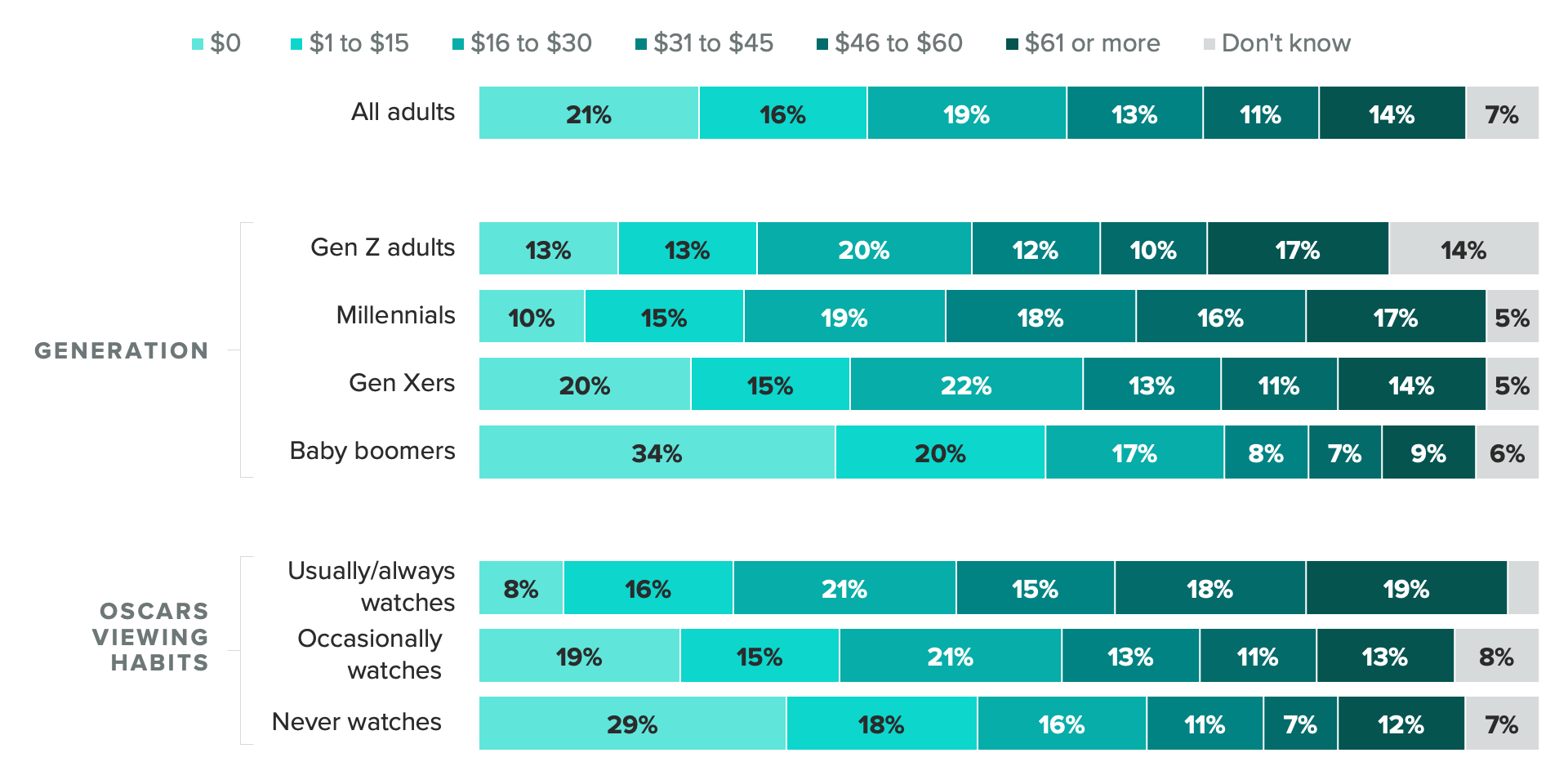 It’s not like Oscars fans will cancel streaming services that don’t clean up at the ceremony, but underperforming makes it harder for platforms to differentiate themselves from one another. Around 8 in 10 (81%) consumers who usually or always watch the Oscars said the inclusion of films that have recently been nominated for or won Academy Awards factors into their decision to sign up for a streaming service, compared with 49% of adults who said the same.

Meanwhile, the share of frequent Oscars viewers who went to the movies in the past month (52%) also eclipsed the shares of all adults (30%) and of every age cohort, especially Gen Xers (26%) and baby boomers (15%), the latter of whom have been particularly reluctant to frequent theaters since the pandemic began. And as video streamers like Apple and Amazon experiment more with theatrical releases, retaining relevance with any audience inclined to frequent cinemas is paramount. 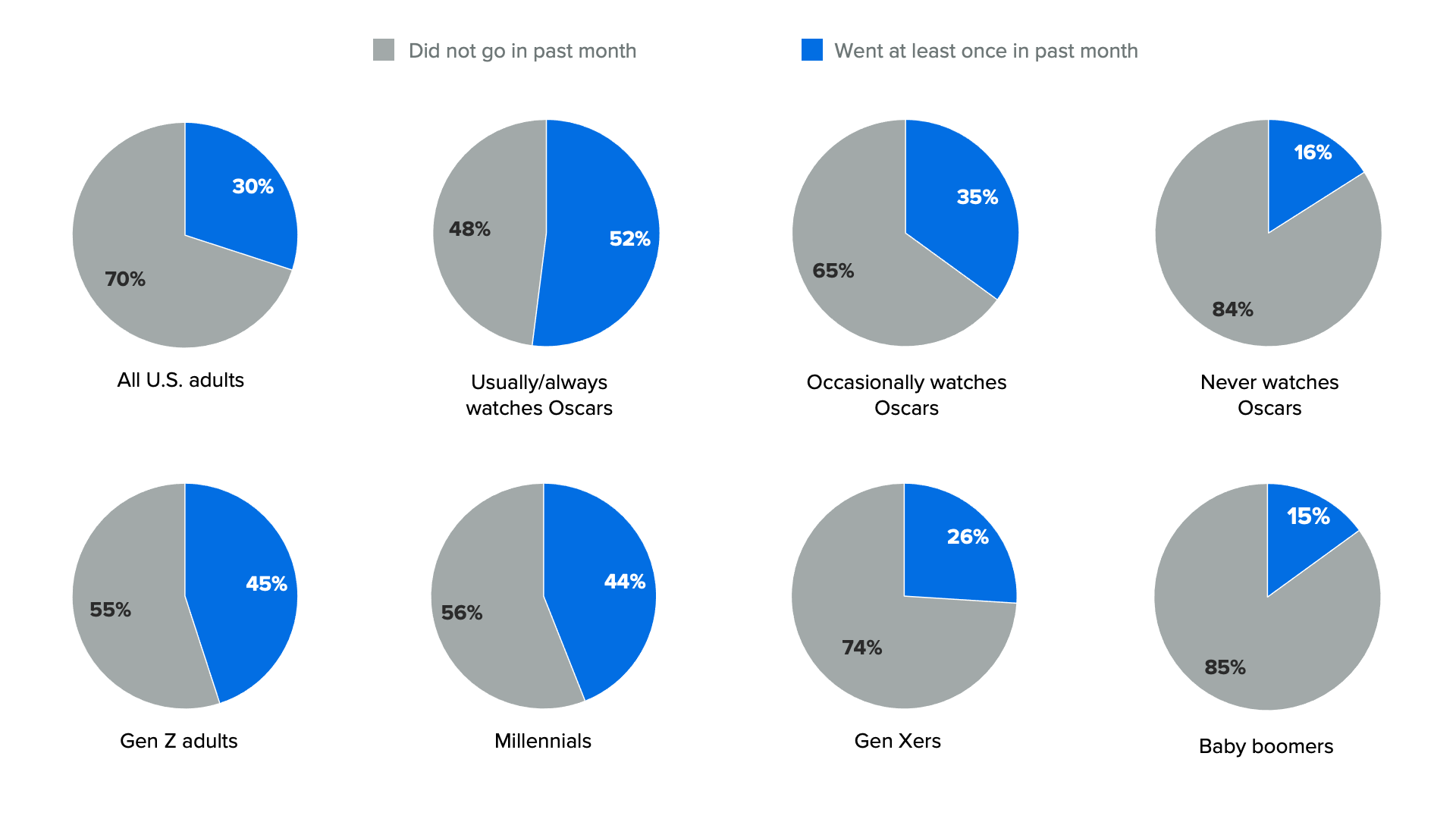 While it’s expected that Academy Award aficionados would be more avid streamers and moviegoers than those who aren’t, the fact that Oscars fans spend more on these media habits than Gen Z adults doesn’t seem like a given. Moreover, it should be promising to Hollywood that the moviegoing experience still appeals to fans of prestige films, which are increasingly seeing premium video-on-demand releases following truncated theatrical windows.

With this in mind, it wouldn’t be surprising to see video streamers remain aggressive at film festival markets like Toronto and Sundance if they don’t perform well at this year’s Oscars. The latter festival’s market was responsible for the sale of “CODA” to Apple in 2021, and streamers have acknowledged that acquiring a prestige film could be cheaper than producing one, IndieWire recently reported.

The other equally, if not more, important impact of missing out on top Oscars is how Hollywood A-listers view nontraditional studios like Apple, Amazon and Netflix, which currently boast few of the most-viewed films that are considered to be Best Picture front-runners.

Respondents were asked if they had heard of and/or watched the following films: 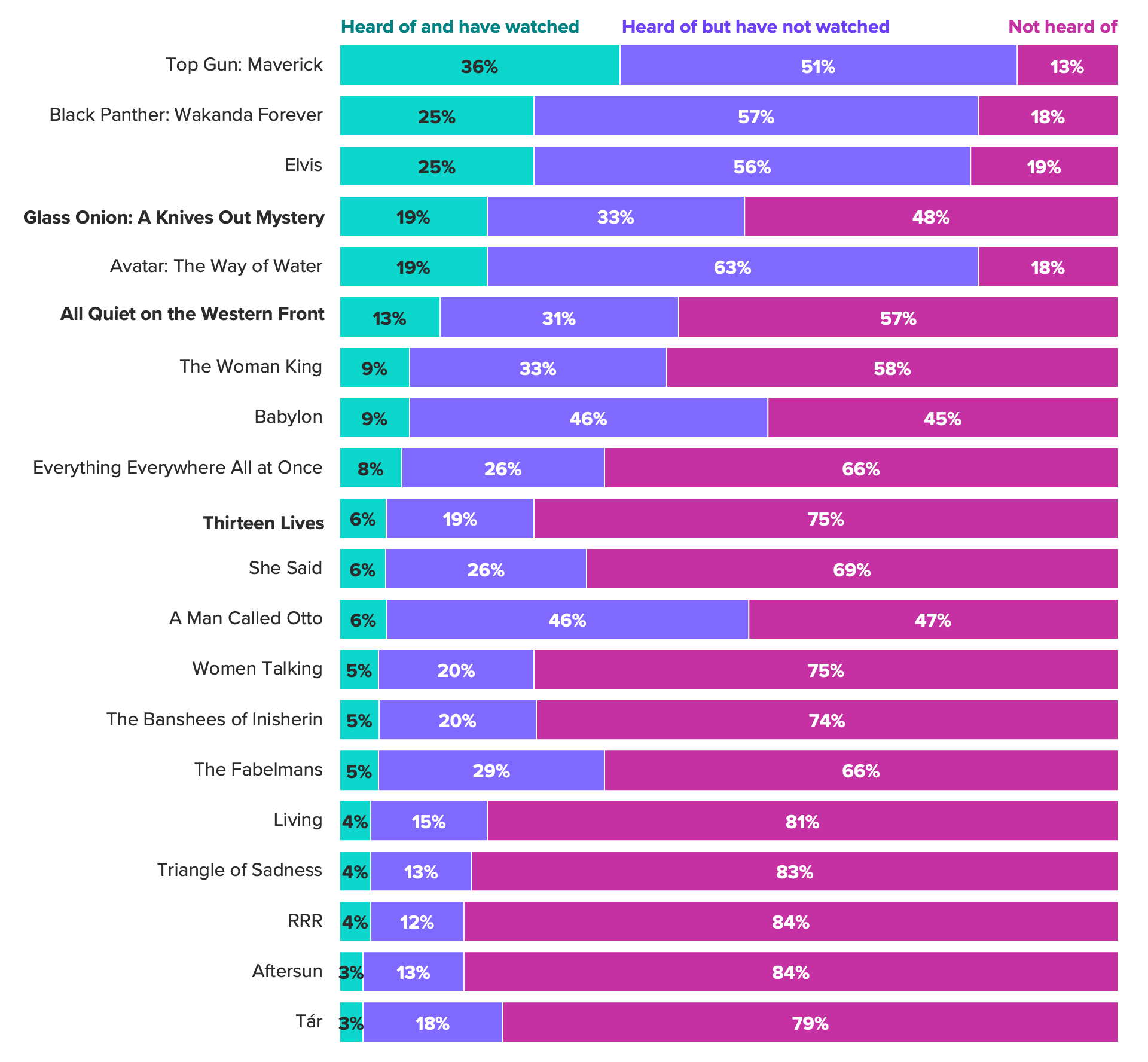 Bolded titles are streaming service originals.
Survey conducted Jan. 14-15, 2023, among a representative sample of 2,204 U.S. adults, with an unweighted margin of error of +/-2 percentage points. Figures may not add up to 100% due to rounding.

Prestigious awards such as Oscars are an important marker of media companies’ creative acumen in Hollywood, and consistently winning many of these awards lends credibility to a film studio — this is particularly helpful for studios looking to sign deals with auteurs like Martin Scorsese or Steven Spielberg.

While an unusually poor showing by Apple, Amazon and Netflix at the 2023 Oscars doesn’t mean auteurs will disregard streamers for future prestige projects, a limited streamer statuette haul could give Hollywood creatives more leverage in negotiations on distribution or overall deals.

For example, a pain point for creatives has long been how streamers typically pay a big project fee upfront at the expense of the expected back-end compensation that is delivered to talent after a project debuts and is commensurate to the audience a title attracts. This compensation system is hotly contested because the back end is typically how Hollywood stars and creatives earn a sizable portion of money from titles that become hits.

If streamers lose their cachet among Academy voters, creatives could have more negotiating power in discussions about back-end payments, and streamers may be more amenable to complying with their demands. After all, streamers should be more willing to accommodate back-end demands from talent for prestige plays, as those are generally expected to attract lower global viewership than pricey blockbusters like “The Gray Man.”

More back-end payouts could also prevent streamers from paying big upfront fees for projects that ultimately flop on their platforms. So it would really be a win-win for streamers to warm up to a payment model that could ultimately save them money in an era when achieving profitability is as great of a focus as it’s ever been.