Little movement in president’s approval rating, public’s views on trade in year of tensions with China, other nations 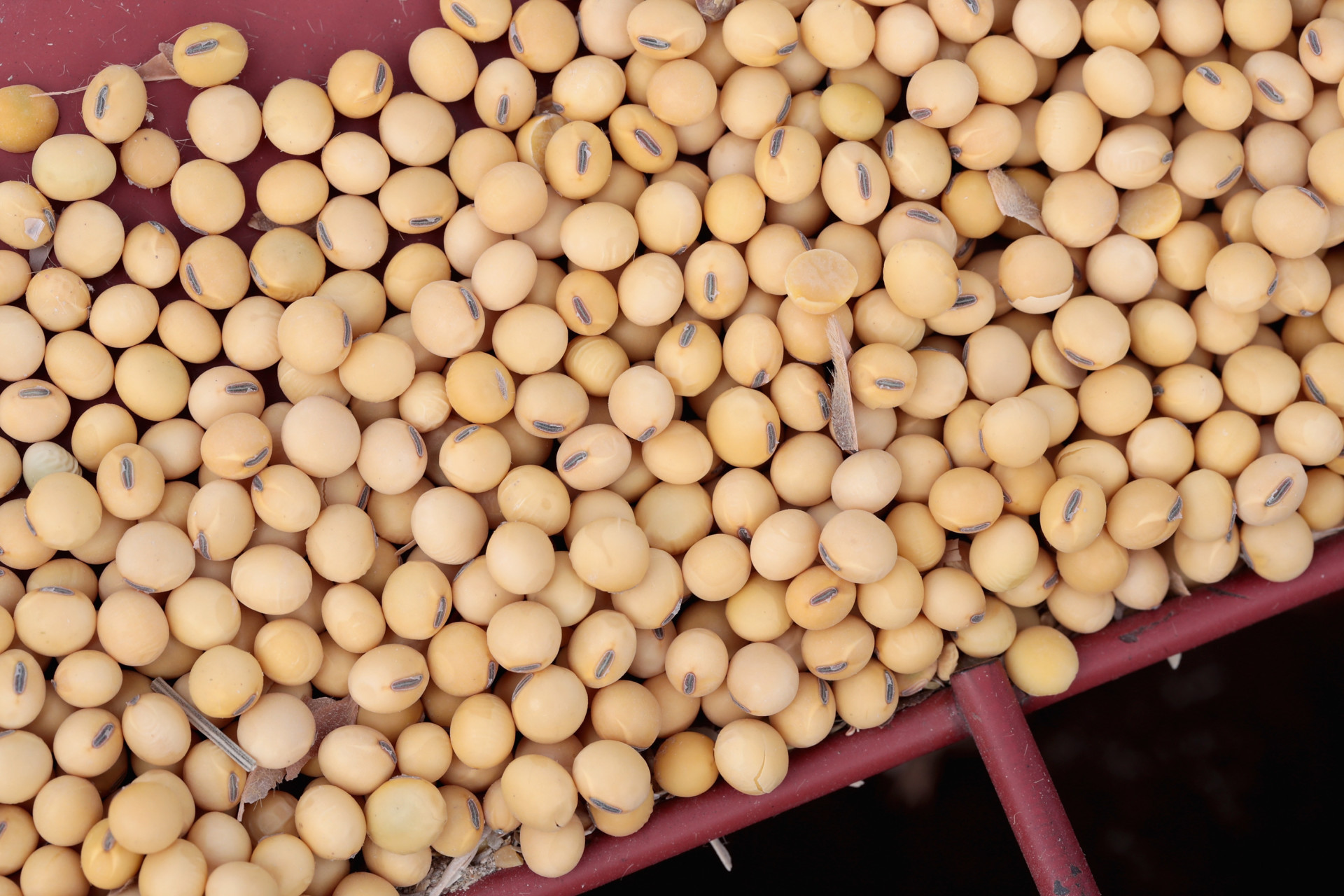 Trade tensions have yet to take a bite out of President Donald Trump’s support base in America’s agricultural and manufacturing heartland, which depends heavily on purchases from China and other countries hit by Trump’s tariffs, according to Morning Consult data.

States that depend on jobs threatened by trade conflict — especially Midwestern agriculture stalwarts such as South Dakota and Iowa — appear to be sticking with the president on trade, surprising many political analysts who had expected the trade war’s economic malaise to flip Trump voters in Middle American states.

For example, in South Dakota, the state estimated by the Brookings Institution to see the most job-related impact from trade conflict, Trump’s approval rating last month was essentially unchanged at 55 percent, from 54 percent in January 2017, according to Morning Consult’s latest version of its Trump Tracker. (The figure has a margin of error of 4 percentage points.)

“Is there anything that would change the sentiment of people in these areas?” said Mark Muro, policy director of the Brookings Institution’s Metropolitan Policy Program. “We’re coming around, resoundingly, to ‘no.’” 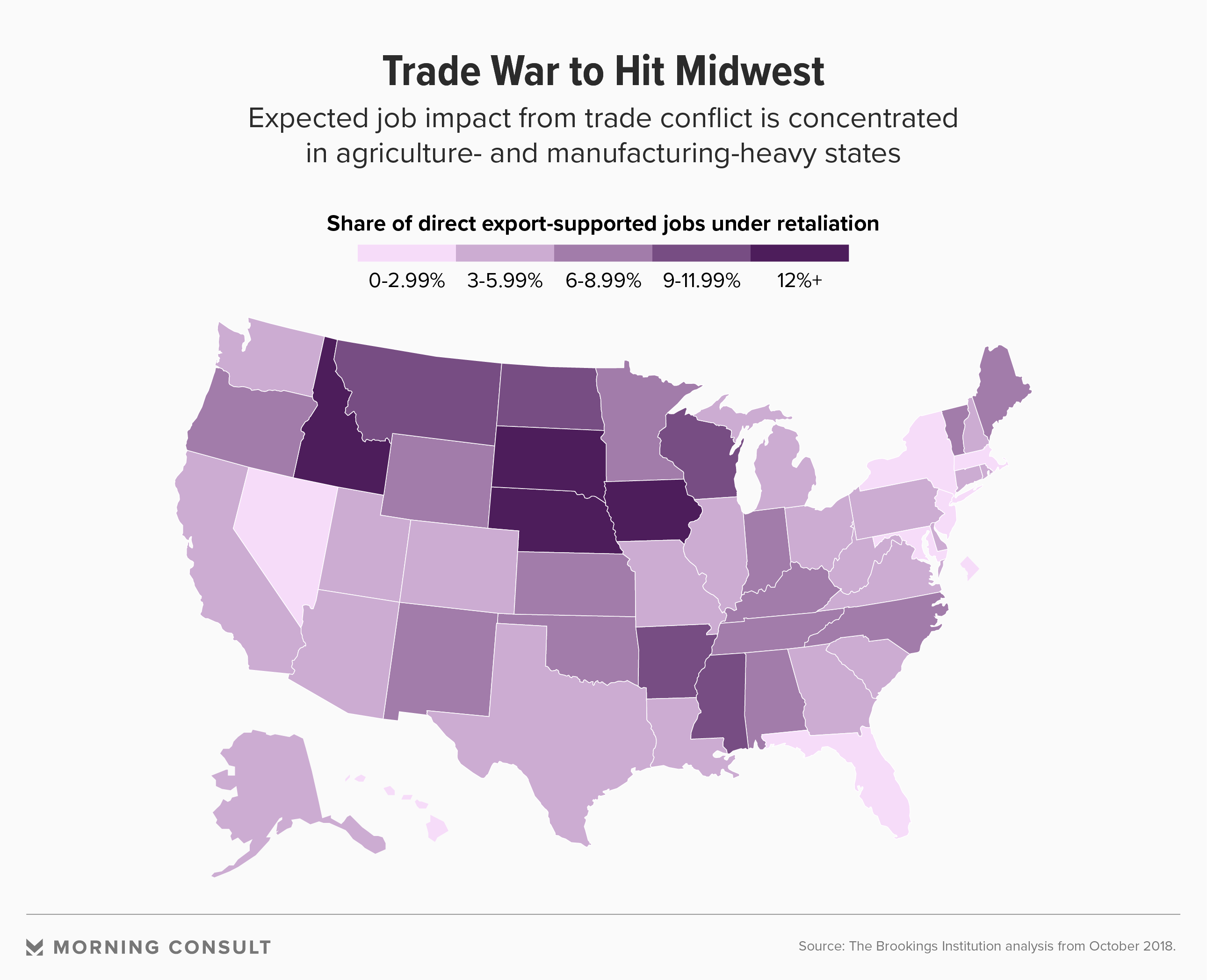 While trade conflict is expected to hit the entire nation’s economy, the impact will be felt most keenly in a narrow swath of voters and a few industries, said Michael Steel, a partner at Hamilton Place Strategies who served as press secretary for then-House Speaker John Boehner (R-Ohio).

Agriculture, for one, has already felt the pinch. Agricultural producer sentiment, a measure that indicates if producers feel this is a good time to make investments, has dropped more than 27 percent year-over-year in large farms, according to Purdue University’s most recent Ag Economy Barometer report.

In another agricultural stronghold — Iowa — Trump’s approval rating declined to 43 percent in December 2018 from 49 percent in January 2017 with a margin of error of 4 percentage points. Notably, however, Trump’s approval in Iowa is the same in December 2018 — when the Trump administration said it was making progress in China trade negotiations — as it was when Trump escalated the trade conflict by moving forward with steel and aluminum tariffs in March.

Steadiness in voters’ trade-related sentiment can be seen nationally, as well. Beginning March 2018, Morning Consult/Politico polls started asking voters whether they believed the U.S. government should pursue more free trade agreements or whether the United States should pursue tariffs and other barriers against products that compete with American counterparts. 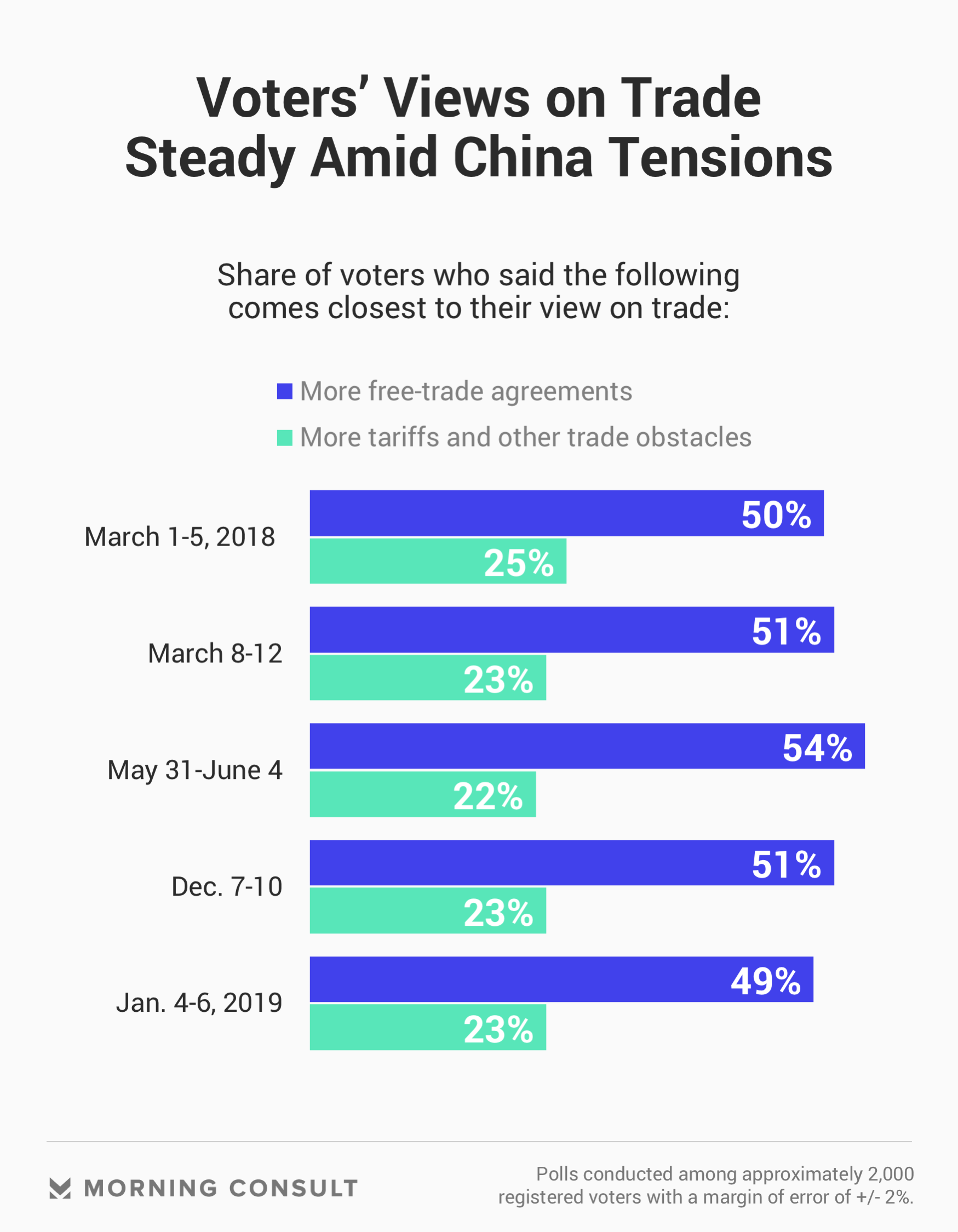 That poll’s results, taken as American and Chinese trade representatives prepared to meet and negotiate a long-lasting truce, are similar to the figures seen in polls conducted throughout 2018.

Experts say this disconnect between trade policy and public opinion stems from an information overload among voters who might not always link complex trade policy with their wallets.

“There’s so much information out there when it comes to the Trump administration,” said Cory Crowley, a Republican strategist who works in Washington and Iowa. “I don’t think voters have time to process it all and how everything affects them in the long term.”

Brad Bannon, a political strategist who works with Democratic candidates, said the same: “Voters have a lot on their plate in terms of issues to deal with, and there’s only so much they can deal with at one time.”