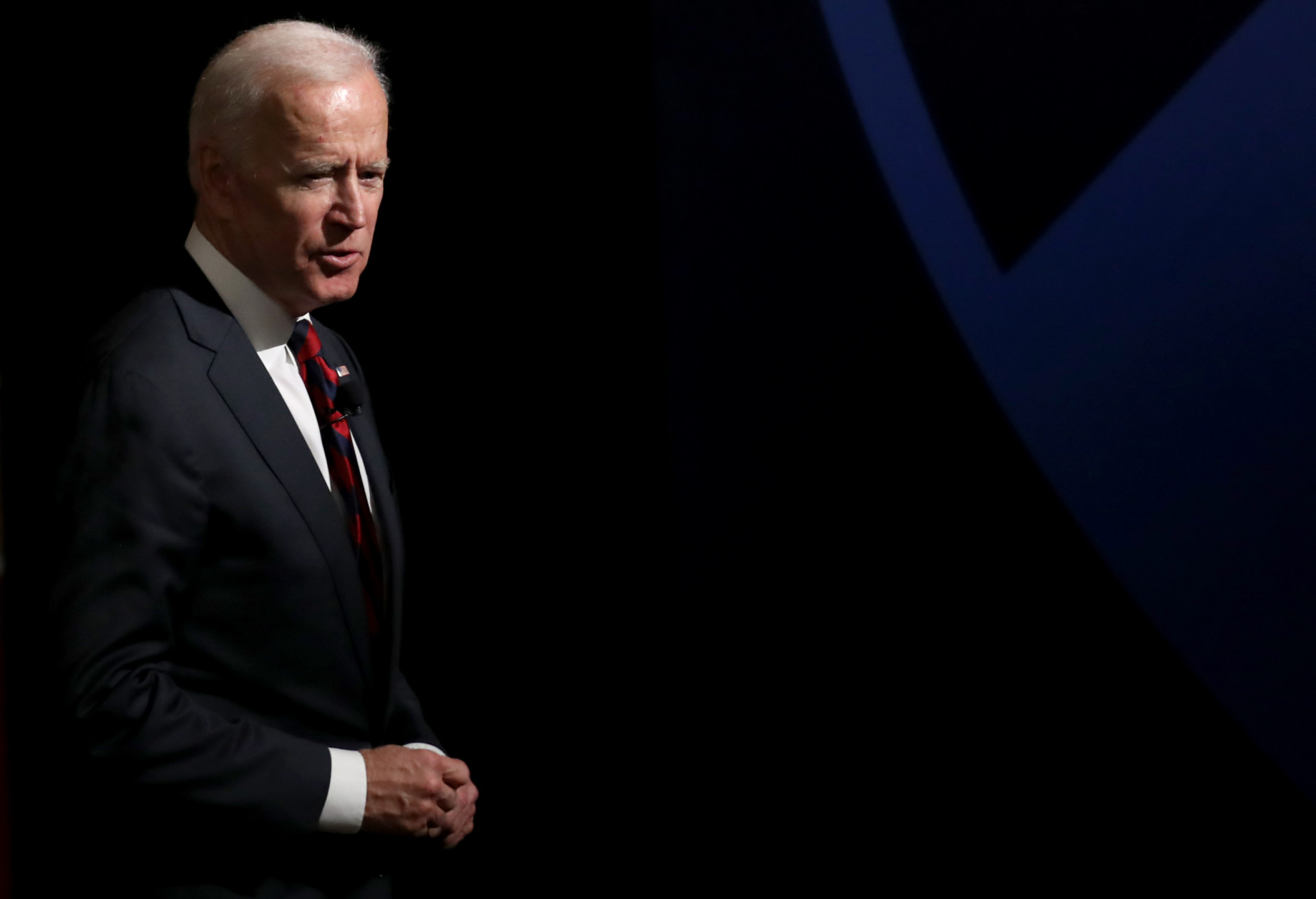 Biden said there are "still a couple hurdles to go" before he announces whether he's running. (Win McNamee/Getty Images)
By Eli Yokley

Sen. Bernie Sanders has surged in popularity following the launch of his 2020 presidential campaign, picking up 6 percentage points in the space of a week to bring him to within 2 points of former Vice President Joe Biden, who’s led the polls.

But a new national Morning Consult/Politico poll indicates that Biden, who said Tuesday that his family has signed off on a 2020 bid but that he has yet to make a final decision, may have a more decisive advantage over the Vermont independent than Morning Consult’s latest horse-race poll suggests.

In the Feb. 22-24 survey, 681 Democratic voters nationwide were pressed on their opinions regarding the top two politicians leading the polls, and the results showed more affinity among respondents for former President Barack Obama’s No. 2 than the independent who challenged Hillary Clinton for the party’s nod in 2016. Fifty-one percent of Democrats said they agreed that Biden was one of their top choices for the party, and that they’d gladly support him in the primary — 13 points higher than the 38 percent who said the same of Sanders.

Biden, speaking with historian Jon Meacham at the University of Delaware, said as he decides whether or not to run, he is taking a “hard look” at “how deep” his support runs.

“What I don’t want to do is take people’s time and effort and commitment without there being a clear shot that I can be the nominee,” he said. “I think we can. I think that’s where we are. But there’s still a couple hurdles to go through to make sure we have all this in place.”

Thirty-three percent of Democrats said they had a favorable opinion of Sanders but would prefer if the party nominated someone else to take on President Donald Trump next year.

Morning Consult polling has seen similar bounces for other candidates following their rollouts. Sen. Kamala Harris (D-Calif.) saw an 8-point bump in the two weeks that followed her Jan. 21 campaign announcement on ABC’s “Good Morning America” and Sen. Elizabeth Warren (D-Mass.) was at 11 percent when tracking began on Jan. 13, two weeks after she announced she was running, compared with 2 percent in a Dec. 14-16 survey. Since those high points, both candidates have seen their share of first-choice support drop 4 points.

The survey’s findings also underscore just how wide open the race remains, with more than 11 months until the Iowa caucuses and the New Hampshire primary. 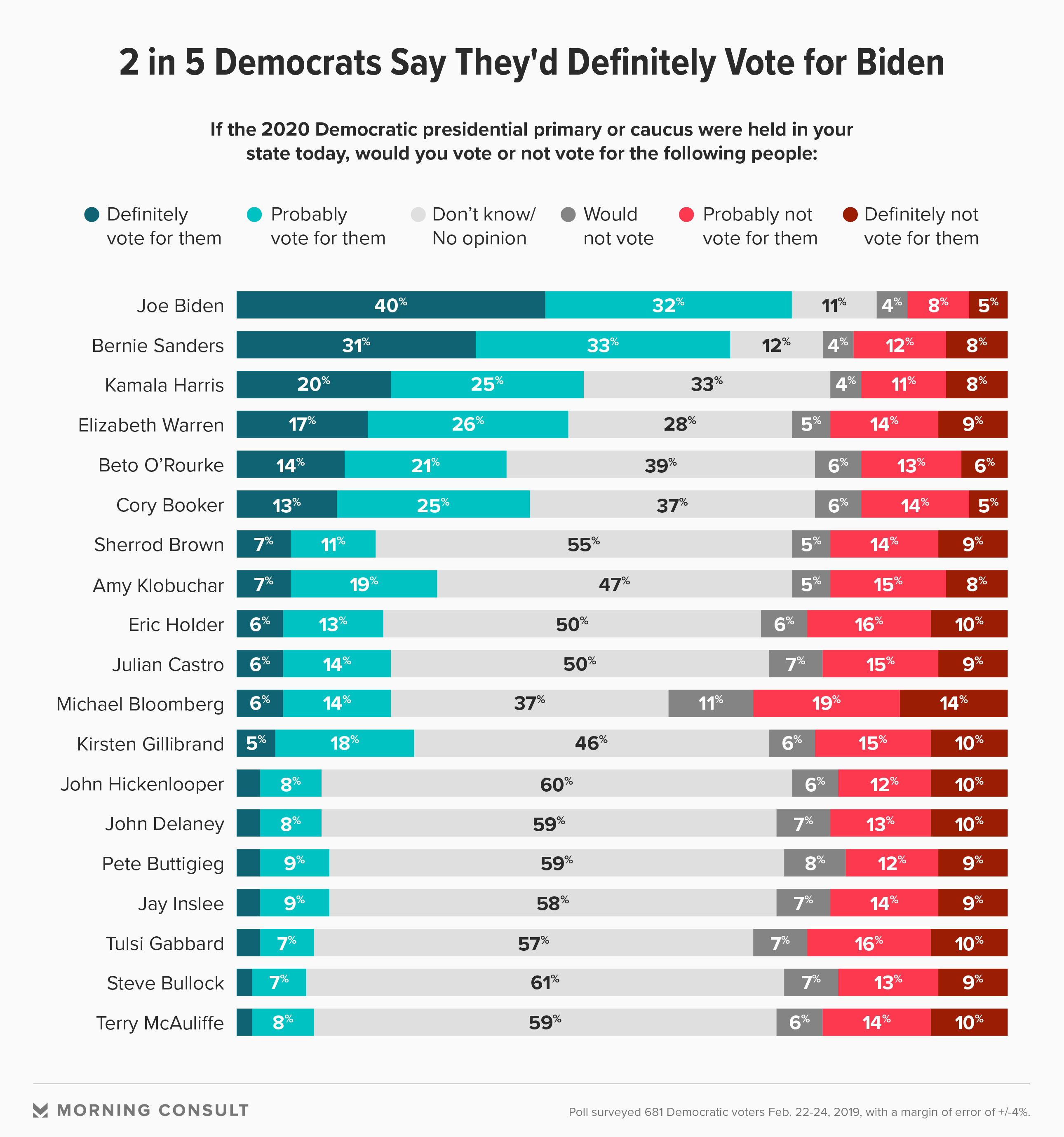 Steve Schale, a political strategist in Florida who directed the 2008 Obama-Biden campaign in the state, welcomed a crowded primary and said it would be smart for those candidates who aren’t yet well-known to jump in sooner rather than later.

And while Schale said he believes Biden has a “pretty good lane” to the presidency with his working-class appeal, he noted that the 2008 and 2016 cycles produced big surprises for political pundits, something that may happen yet again.

“I think it’s going to get crazy regardless. We’re Democrats,” he said.