Biden Still Leads Among Black Voters, but His Support Is Softening 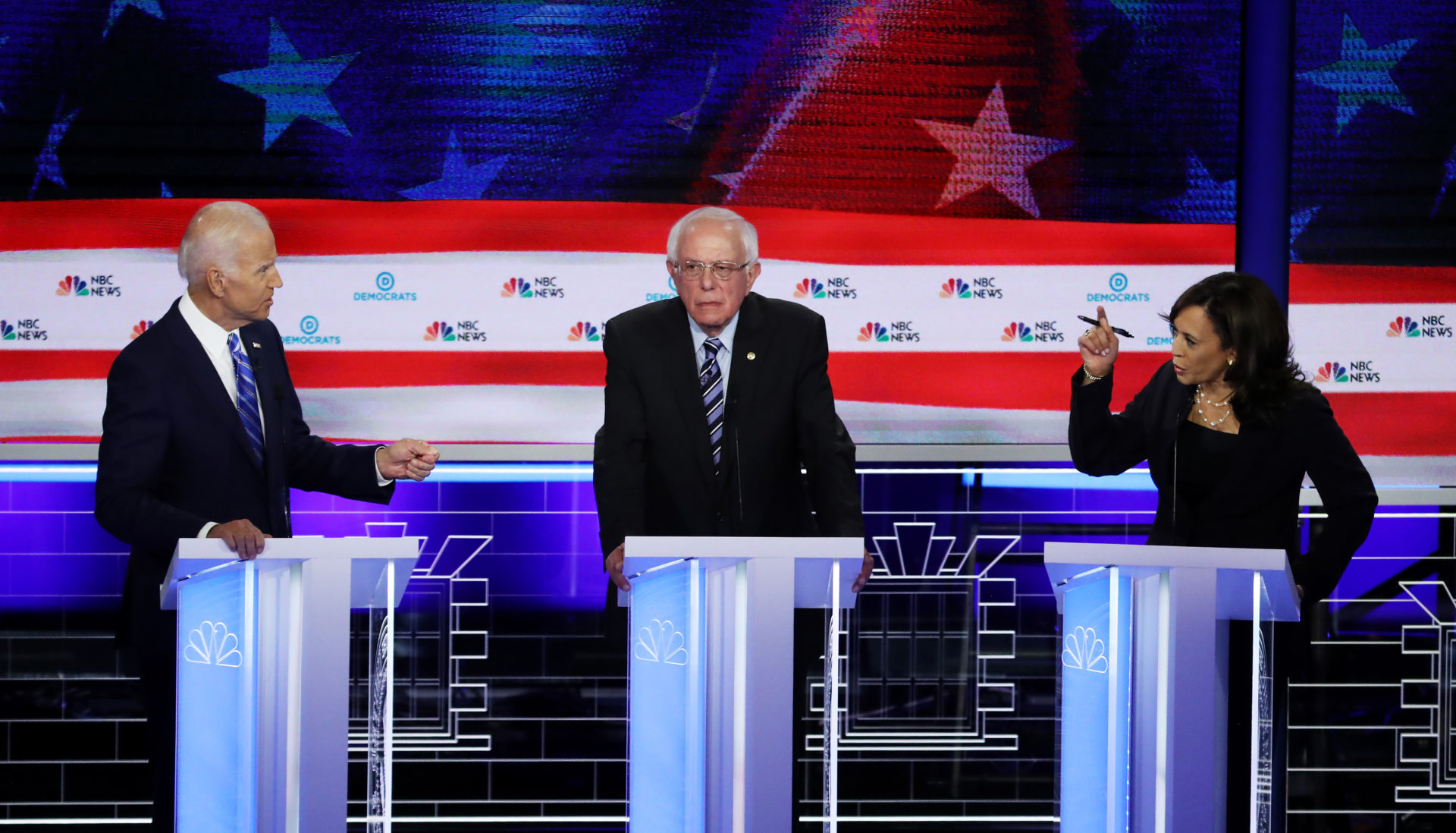 Sen. Kamala Harris and former Vice President Joe Biden square off, with Sen. Bernie Sanders in the middle, during the second night of the first Democratic presidential debate on June 27, 2019 in Miami. (Drew Angerer/Getty Images)
By Eli Yokley

Joe Biden is still the leader in the 2020 Democratic race among black primary voters, but the former vice president has lost the ground he had gained since launching his presidential campaign in April after last month’s Democratic primary debates. 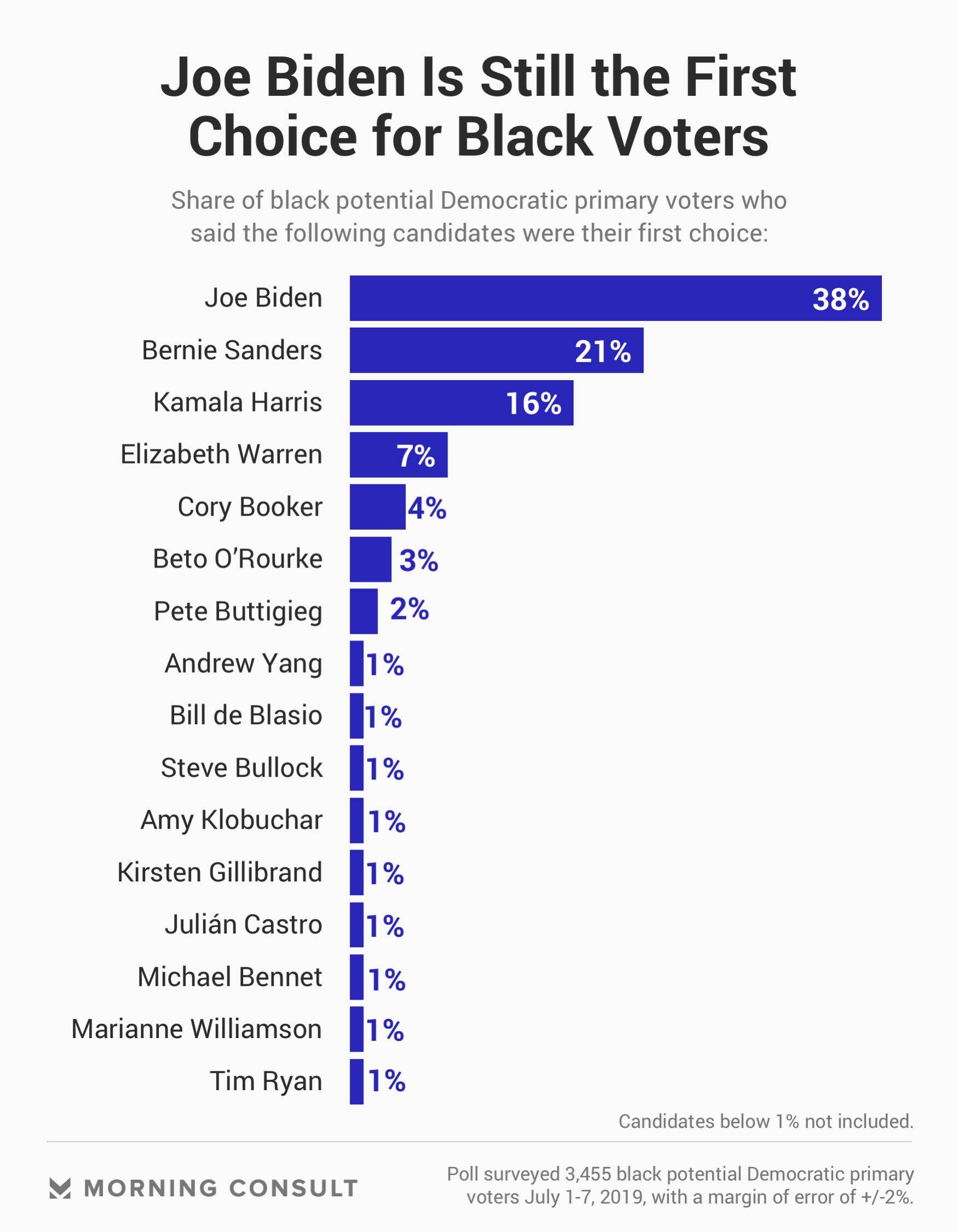 The movement came as Biden’s campaign reeled from the punch Harris packed against him during the June 27 Democratic debate. On stage, Harris criticized Biden’s decades-old opposition to federal involvement in busing as well as comments he made at a June fundraiser about working civilly with segregationists while he was in the Senate.

Biden, who was first elected to the Senate from Delaware in 1972 and was re-elected five more times, accused Harris of a “mischaracterization of my position across the board” during the debate, but it wasn’t until this past weekend — nine days later — that he expressed regret for his comments about the Senate segregationists.

“I regret it. I’m sorry for any of the pain or misconception they may have caused anybody,” he said in remarks Saturday in South Carolina to applause, a day before the latest survey concluded.

In the same speech, he sought to downplay his record from his early years in the Senate and instead highlight his record serving as vice president to former President Barack Obama, the nation’s first black president who remains popular with Democratic voters. 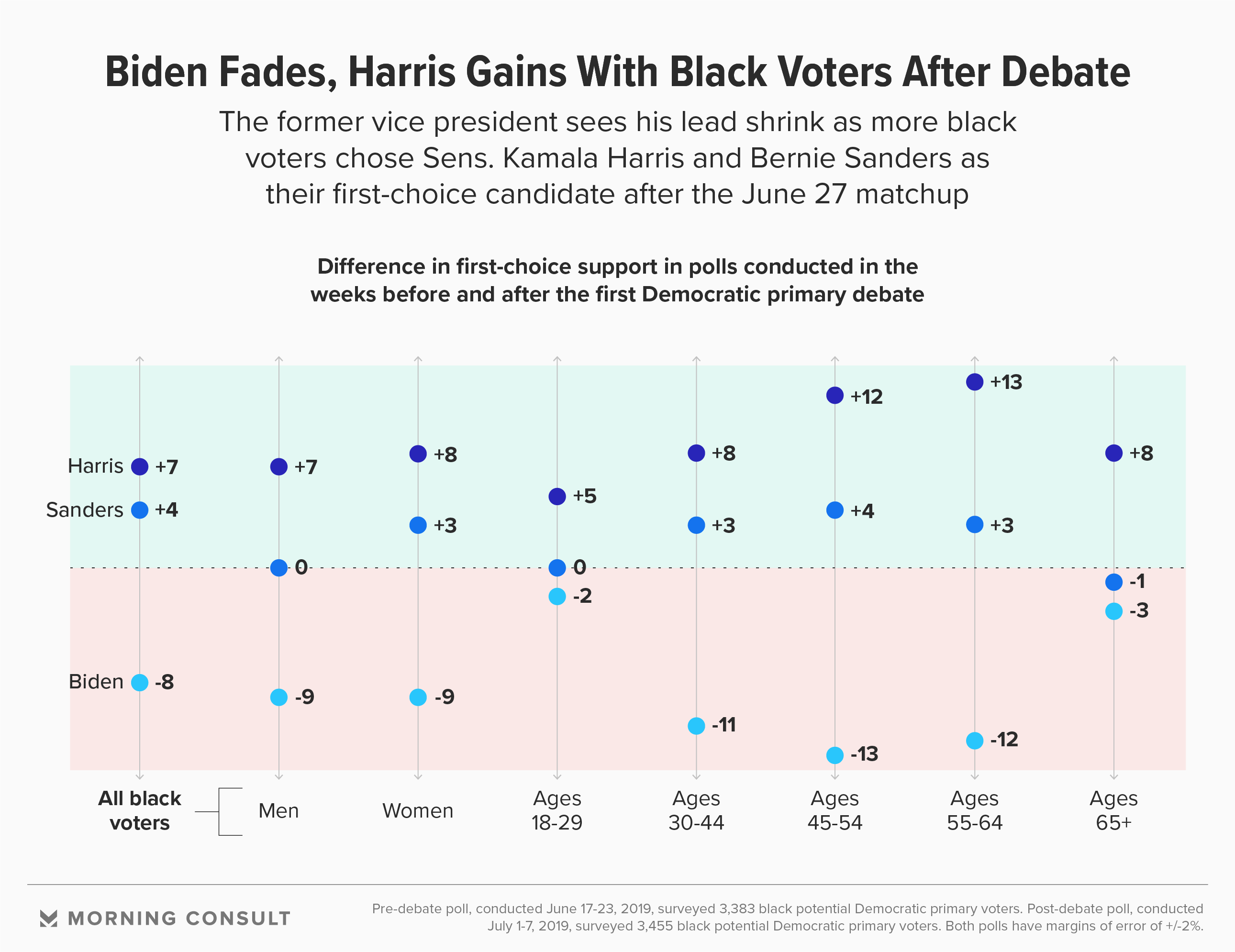 Harris is in second place among black voters ages 45-54, 55-64 and 65 and older, but Biden’s advantage widens as voters get older.

Among the youngest black voters, ages 18-29, Harris — with 7 percent of the first-choice vote share — is roughly tied with Massachusetts Sen. Elizabeth Warren for third place. Biden is in second place, with 26 percent of first-choice vote share, trailing Sanders by 10 points. The findings mirror the overall population of the youngest Democratic voters, among whom Sanders leads Biden by 14 points.

Overall, Biden’s first-choice vote share has fallen 7 points since before the debate, to 31 percent, while Harris has risen 8 points and Sanders has maintained his 19 percent support.