How Trump Is Weighing on 2020’s Most Vulnerable Senators

Republican incumbents have seen their popularity decline, and they must contend with Trump’s lack of popularity

Republicans face a tough map as they work to maintain their Senate majority next year, with their most vulnerable members facing two main problems: Some have seen their popularity fall significantly since President Donald Trump entered office, and for those who haven’t, negative views of his job performance could be a drag on their own paths to re-election. 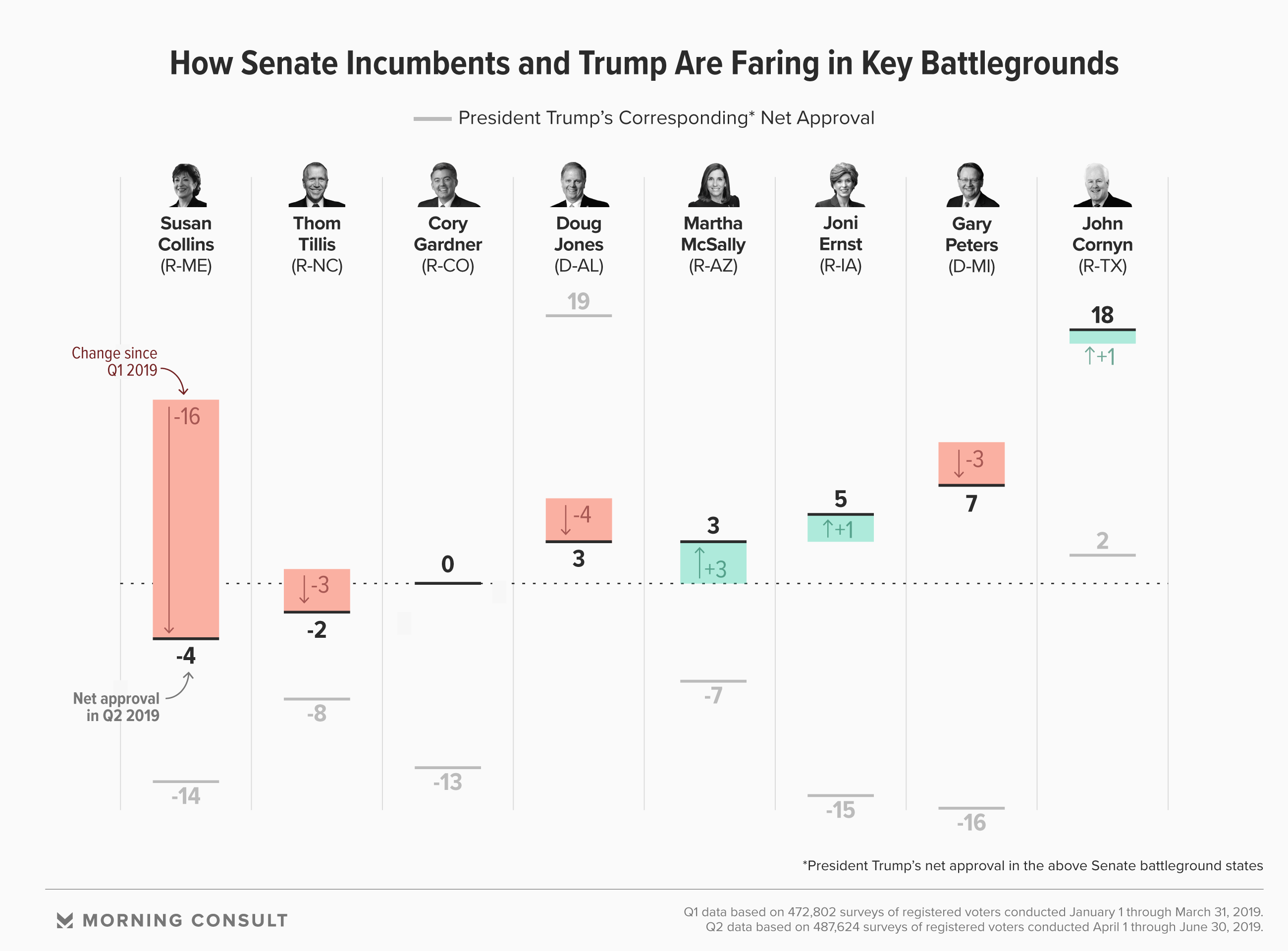 Democratic strategist Martha McKenna said Republican incumbents are “of the Senate and of Trump’s Republican Senate” as they prepare to face voters on the same ballot with him next fall. Split-ticket voting has continued to decline over past election cycles, hitting a new low in 2018, according to a FiveThirtyEight analysis.

The latest findings also underscore just how much voters have soured on their GOP senators.

Collins’ net approval — the share of voters who approve of her job performance minus the share who disapprove — has fallen by 44 percentage points since the first quarter of 2017, when Trump took office. Forty-five percent of Mainers approve of Collins and 48 percent disapprove in the latest rankings, down 16 net points since quarter one of this year, as her campaign gears up in earnest to face a Democratic challenge from state House Speaker Sara Gideon.

Kevin Kelley, a spokesman for Collins’ campaign, said in an email, “Collins continues to be subjected to a nonstop barrage of negative and false attacks.”

“As soon as Mainers focus on next year’s campaign, and Senator Collins’ extraordinary record of bipartisan accomplishments, we are confident that she will prevail just as she has in past elections when extreme, out-of-state interests have tried to defeat her,” he said.

All three senators are outperforming Trump’s approval in their states, as are vulnerable incumbents Ernst and John Cornyn, a Republican from Texas. Ernst and Cornyn have seen smaller drops in their net approval and are doing much better to outshine the president at home.

In Arizona, McSally, who was appointed to a vacant seat after losing a close race to Democratic Sen. Kyrsten Sinema in November, has a 10-point advantage on Trump’s net approval, with 40 percent of Arizonans approving of her and 37 disapproving.

Republicans have at times struggled to navigate the dynamics wrought by Trump’s presidency. The commander in chief is beloved by the party’s base but is broadly unpopular with the general electorate.

Republican strategist Tim Cameron noted that Senate Republicans who have been successful maintained close ties to the president, running ahead of Trump in 2016 and benefitting from his popularity in red states during the 2018 midterms to strengthen the GOP’s majority in the chamber.

“What we’ve seen the last two election cycles is: The people that separated themselves further from the president often found themselves in the worst position,” he said. “Even when you look at the senators who outperformed Trump, those were the ones who largely stayed in line in 2016.”

What we've seen the last two election cycles is: The people that separated themselves further from the president often found themselves in the worst position.

Tying an incumbent senator to an unpopular president is a tried-and-true tactic that worked wonders for Republicans during Barack Obama’s presidency, and is already being utilized against the most vulnerable Republican senators on the ballot next year.

McKenna, who worked for the Democratic Senatorial Campaign Committee during the Obama years, said the Democrats who were able to win their contests in 2012 did so through three main factors: strong local grassroots bases of support, an independent brand or a flawed Republican rival.

But Trump is a different figure, who makes it more difficult for candidates to assert their independence, McKenna said.

“Politics has changed so much since then,” she said. “Everything revolves around Donald Trump.”

Candidates have not yet been set in most of the states where Republicans are facing tough races next year, but those who are most vulnerable are already having their independent credentials questioned.

Collins has been hit for her support of Supreme Court Justice Brett Kavanaugh’s controversial nomination. Tillis has faced attacks for first opposing Trump’s national emergency to fund construction of a U.S.-Mexico border wall before ultimately voting to support it. Gardner, meanwhile, is facing a home-state electorate that has broadly moved away from the Republican Party in recent cycles.

“What a lot of these campaigns are going to need to be doing over the course of the next year and a half are pick and choose the areas where they distance themselves from Trump, where they’re with him and show how maybe they’re stylistically a little different in their approach to governing,” said Cameron, who led the National Republican Senatorial Committee’s digital program from 2013-16.

Strategists said early attacks — if well-circulated to voters — can sting because of how views of many of these incumbents are unformed by chunks of the electorate in their home states. More than 3 in 10 voters in Texas and North Carolina said they did not know or had no opinion on their senator’s job performance, and roughly a quarter of voters in Colorado and Arizona said the same.

Taking Tillis as an example, McKenna said “as he’s introduced in the state, independent voters are going to try to figure out who he is. The easiest way is looking at his relationship to the president.” (A Tillis strategist said in an email Wednesday that the campaign expects the Democratic nominee for Senate to try to distance themselves from their own presidential nominee, noting the leftward drift of the Democratic presidential primary.)

While Republicans are defending many more seats next year than they did in 2018, they also have two key opportunities to counter potential losses.

Democratic Sens. Doug Jones of Alabama and Gary Peters of Michigan are expected to face tough re-election campaigns next year, and that field could expand further if races heat up in places like New Hampshire and Virginia.

Jones has experienced a 19-point decline in his net approval since he joined the Senate in January 2018, ending the latest quarter with 39 percent of Alabama voters approving of him and 37 percent disapproving. Jones is the only Democrat up for re-election in a state where Trump is very popular: Fifty-seven percent of Alabama voters approve of the president, compared with 38 percent who disapprove.

Peters — the country’s most unknown senator up for re-election next year who faces a credible challenge from Republican candidate John James — has the support of 34 percent of voters while 27 percent disapprove, giving him a 23-point advantage over Trump in terms of net approval.

Dan Farough, Peters’ campaign manager, said in an email, “The people of Michigan want their Senators to be workhorses, not show horses, and Senator Peters is continuing to work hard and deliver results.”

But, Cameron said Election Day next year could see Trump lose but James outperform him and defeat the “relatively unknown, undefined” incumbent.

“Peters is really going to need to define himself over the next six to nine months,” he said.

Correction: A previous version of this story misstated how long Peters has been a senator.