Former New York City Mayor Mike Bloomberg speaks at the Buffalo Soldiers National Museum on Feb. 13 in Houston as part of the launch of "Mike for Black America," an effort to focus on key issues relating to black Americans. A new poll finds Bloomberg's support among black Democratic primary voters on the rise. (Callaghan O'Hare/Getty Images)
By Eli Yokley

As he faces attacks on his past comments about policing and his support for a law enforcement policy that has been criticized as racist, former New York City Mayor Michael Bloomberg is entering his first Democratic presidential debate with increased support from black Democratic primary voters.

New Morning Consult polling tracking the race for the Democratic nomination found Bloomberg is the first choice for 20 percent of black voters who indicated they may vote in the primary or caucus in their state, up 4 percentage points since polls conducted before the Feb. 11 New Hampshire primary. 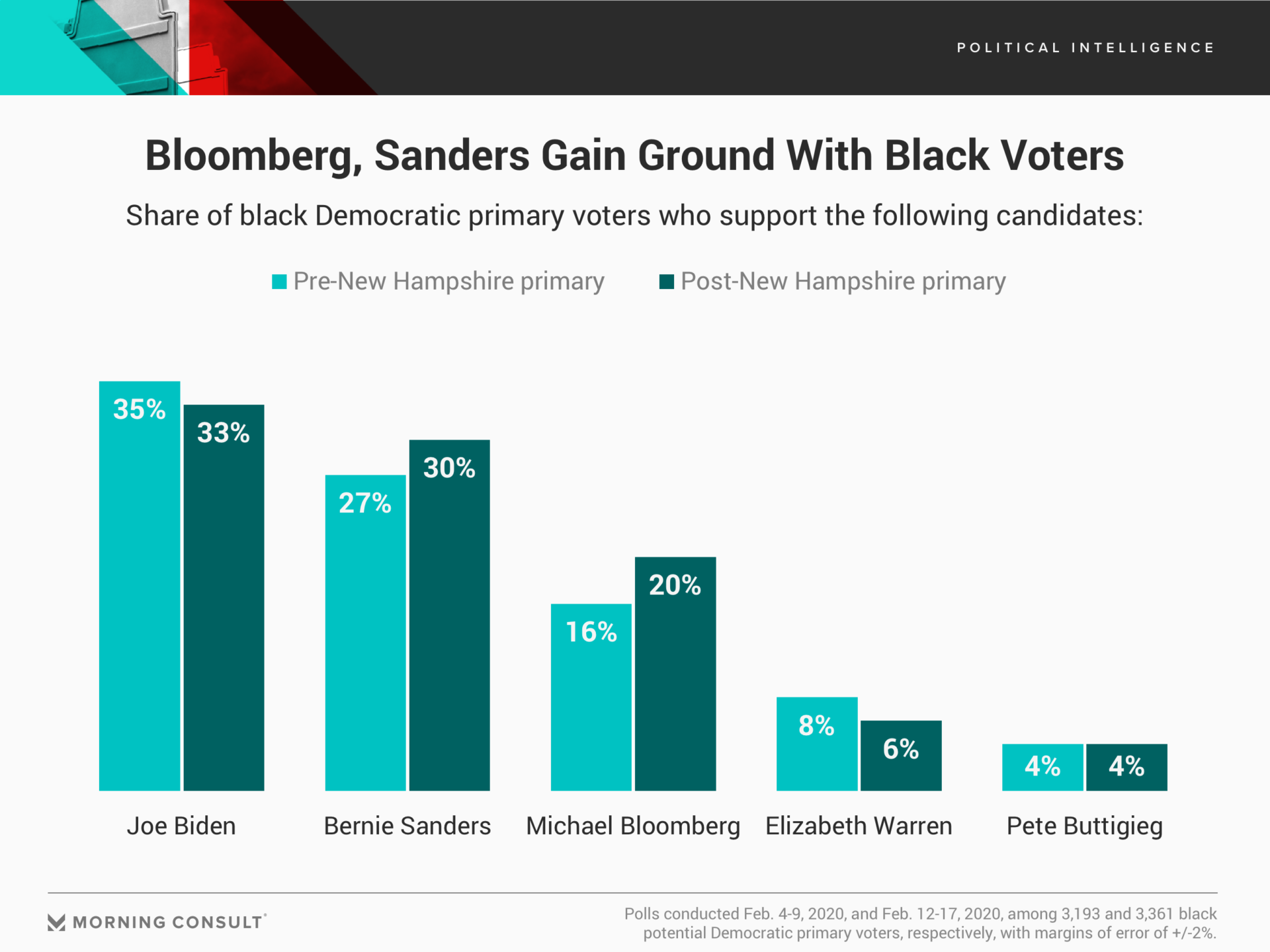 Bloomberg’s uptick in support comes as former Vice President Joe Biden continues to see his grip on the key Democratic constituency loosen and as Sen. Bernie Sanders (I-Vt.) nearly pulls even among the voting bloc: Biden’s the first choice of 33 percent of black voters, versus 30 percent who support Sanders.

Older black voters are more likely to support Bloomberg than younger black voters, though his standing with those voters is still well below Biden’s. Sanders, meanwhile, has a huge advantage with the youngest black voters, nearly half (47 percent) of whom back the Vermont independent.

Overall, the poll found Biden’s standing continued to decline with Democratic primary voters. Nineteen percent said he was their first choice, down 3 points from the previous week and putting him in third place after Bloomberg, who’s at 20 percent support

The latest polling was conducted Feb. 12-17, as a 2015 audio clip resurfaced capturing Bloomberg defending New York City’s stop-and-frisk policy and the New York City Police Department’s move to put law enforcement officers in “minority neighborhoods” because “that’s where all the crime is.” A Morning Consult/Politico poll conducted Feb. 15-17 found 21 percent of Democratic primary voters heard “a lot” about the controversy, compared to 3 in 10 who said they’d heard nothing at all. Two in 10 black voters said they’d heard a lot about it, while 39 percent said they had not.

The comments are likely to come up in Wednesday’s debate in Las Vegas, where Bloomberg’s Democratic rivals have their first chance to land a blow on a candidate who has been projecting a positive image on his own terms via an onslaught of ad spending in Super Tuesday states. The remarks could also have longer legs if he were to become the Democratic nominee, as President Donald Trump seeks to improve the GOP’s standing with black voters or sap their motivation to support his general-election foe.

Bloomberg, who apologized last week for the remarks and his support of the underlying policy, has already faced attacks on the issue from both sides. Trump, who in the past supported the stop-and-frisk policy, tweeted the audio clip and called Bloomberg a “TOTAL RACIST,” though the tweet was later deleted from his account. Trump’s rhetoric was reiterated by Sanders, who denounced stop-and-frisk as “racist” during a campaign rally on Monday. 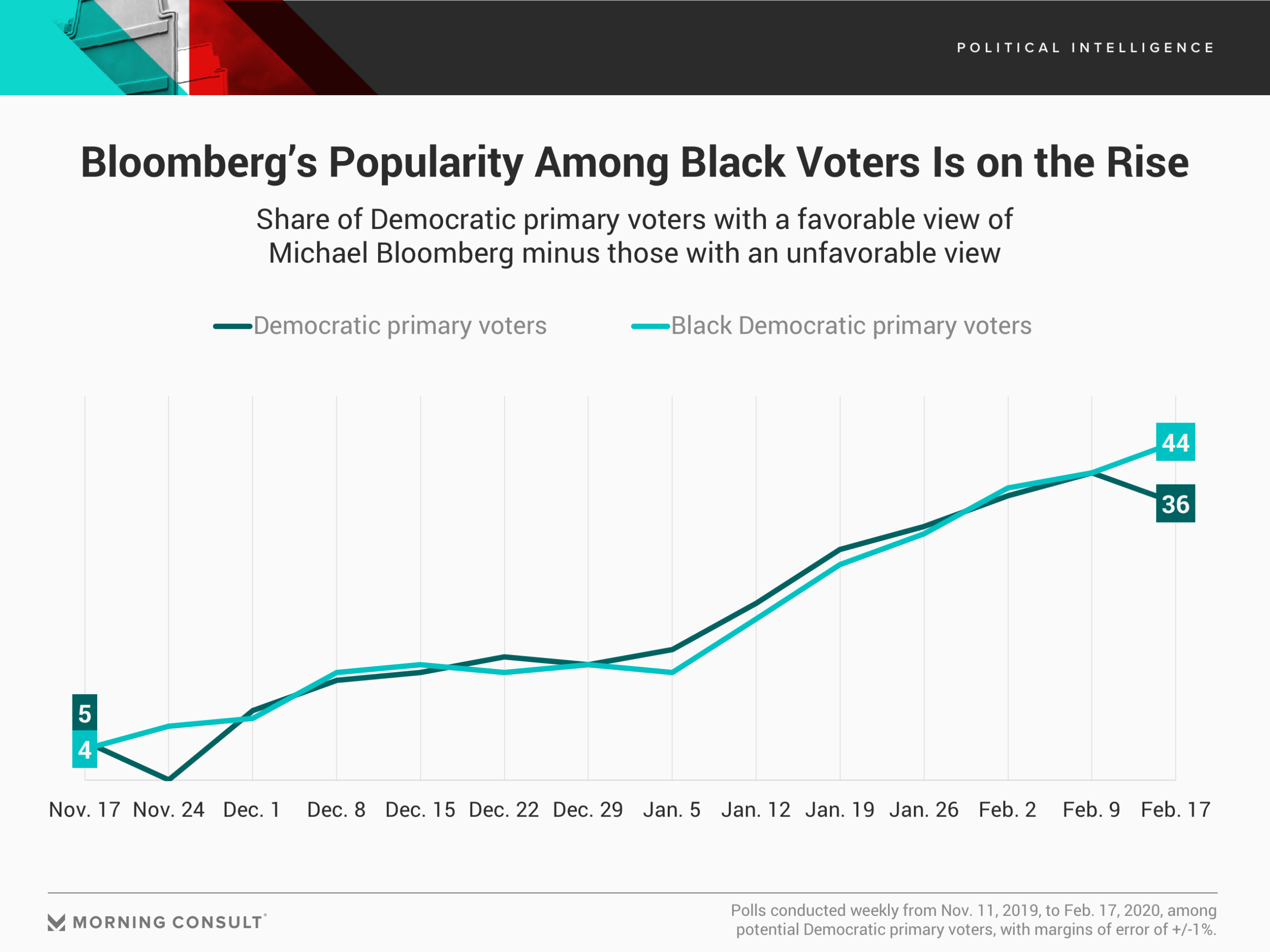 The episode — which comes as the Democratic race moves to a more diverse slate of states ahead of Bloomberg’s first ballot appearance on March 3 — has not dampened Bloomberg’s popularity with black voters, which has been on the rise along with his favorability among the entire Democratic primary electorate since the fall.

Sixty-two percent of black voters said they have favorable opinions of the former New York mayor, while 18 percent said they had unfavorable views. Bloomberg’s 44-point net favorability is the highest recorded since Morning Consult began tracking him in November.