31% say the country is headed in the right direction, while 69% say its on the wrong track

Merchandise stands in a damaged souvenir and electronics shop near Times Square after Monday night's protests in New York City. New polling shows voter optimism about the direction of the country has reached its lowest point since President Donald Trump's tenure in the White House began. (John Moore/Getty Images)
By Eli Yokley

Two major crises playing out at the same time in the United States — the deadly coronavirus pandemic and social unrest over the deaths of black people that has erupted into nationwide demonstrations — have helped erode voters’ confidence in the direction of the country to its lowest point of Donald Trump’s presidency.

A new Morning Consult/Politico poll, conducted May 29-June 1, found 31 percent of voters believe the United States is headed in the right direction, while 69 percent said it has “pretty seriously” gotten off on the wrong track. The gap between the two figures, at 38 percentage points, is the widest measured in all of the 171 weekly polls conducted since Trump took office in January 2017, and has only been topped by two polls conducted in 2016 following his November election. 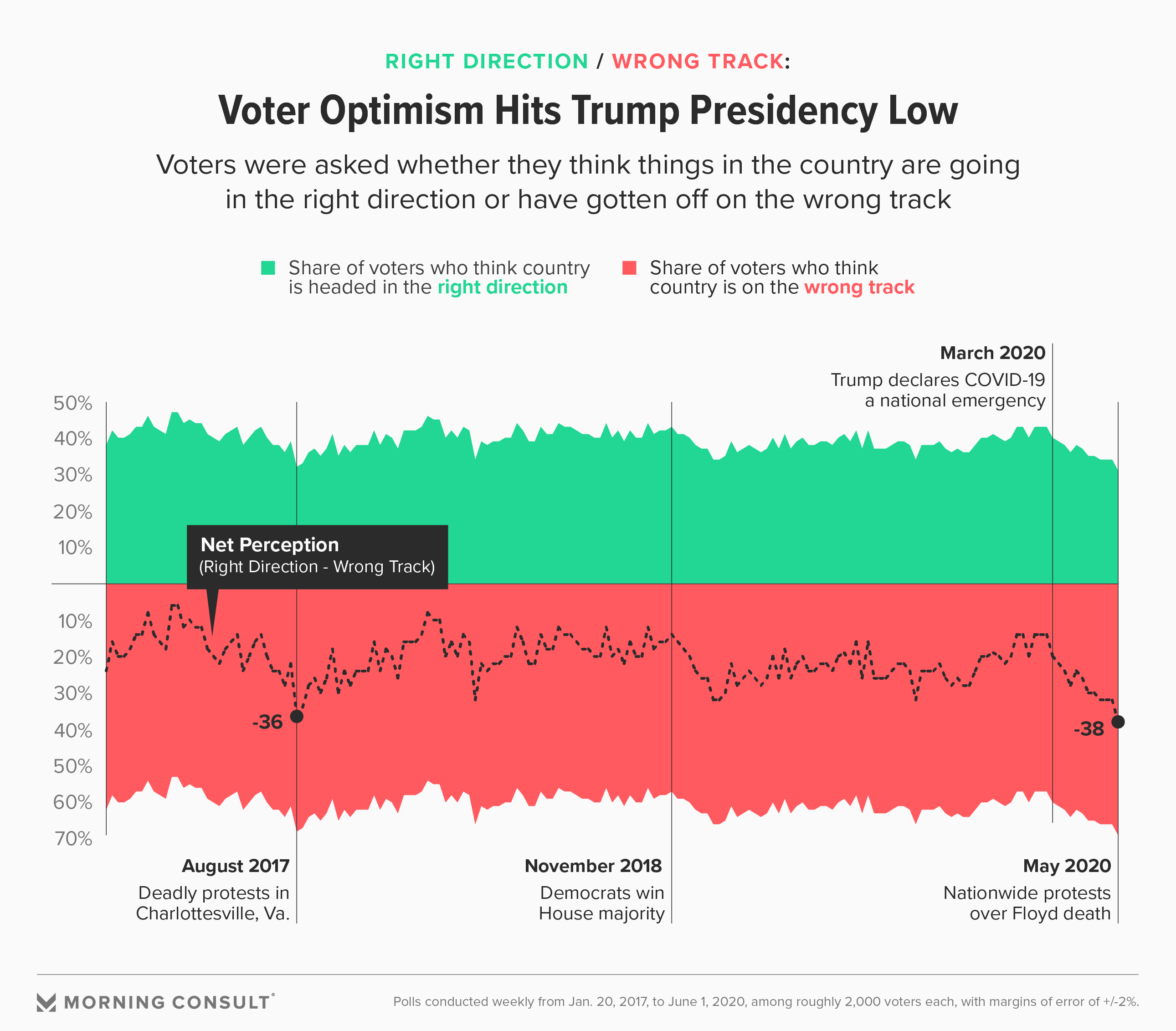 “The pandemic has impacted more people’s lives directly than some of the other major events in the Trump era,” said J. Miles Coleman, associate editor of Sabato’s Crystal Ball at the University of Virginia Center for Politics. “Combine that with the very concrete images of rioting and looting that have been blanketing the news, and I can see why the electorate would feel especially anxious.”

Sentiment about the country’s course — underwater throughout all of Trump’s presidency — went mostly unchanged throughout 2019 before a notable uptick in February, which came as the nation put the monthslong impeachment saga behind it and positive economic headlines swarmed the news.

In three surveys conducted at the end of February and the first week of March, 43 percent of voters said the country was headed in the right direction and 57 percent said it was on the wrong track. But by mid-March, when Trump declared a national emergency after the World Health Organization designated COVID-19 as a global pandemic — ushering in public health guidelines that shuttered businesses, forced people out of work and stalled the booming economy — sentiment began to shift.

Since that high point, net sentiment — the share with positive views about the direction of the country minus the share with negative views — has fallen 24 points, including a 6-point drop from last week’s poll as several peaceful nationwide demonstrations sparked by the killing of George Floyd by a Minneapolis police officer boiled over, resulting in destruction in cities such as Atlanta, New York City, Philadelphia and Washington, D.C.

The week-to-week movement was driven largely by independent voters and, to a lesser degree, by women. The vast majority of black voters (85 percent) said the country was on the wrong track — unchanged from the previous week.

At this point in Barack Obama’s presidency ahead of his 2012 re-election, 58 percent of voters said the country was on the wrong track and 34 percent said it was headed in the right direction, according to a RealClearPolitics average. Those numbers improved ahead of the November contest, particularly on the “right direction” side. A Morning Consult survey from June 2016 found just 28 percent of voters believed the country was headed in the right direction.

Andrea Benjamin, an associate professor at the University of Oklahoma, said things like job approval, partisanship and voters’ economic standing are better predictors of electoral outcomes than voter optimism, but that the shift in sentiment reflects larger concerns among voters regarding government and the two crises, whether they be directed at the local, state or federal level.

The drop in voter optimism was joined by a small dip in Trump’s approval rating, which, like the state of the presidential race against presumptive Democratic nominee Joe Biden, has gone largely unchanged in recent weeks. The latest survey, which polled 1,981 registered voters, found 41 percent approve of Trump’s job performance and 55 percent disapprove, compared with 44 percent who approved and 53 percent who disapproved before the coronavirus was classified as a pandemic. Both polls have a 2-point margin of error.

But such a jolt in public opinion — a rare response in the Trump presidency — recalls voter reaction to the deadly demonstrations in Charlottesville, Va. At the time,Trump said there were some “very fine people” on both sides of the August 2017 protests, which featured neo-Nazis and white nationalists facing off against counterprotesters, including “Black Lives Matter” activists. At the time, polling found a 14-point net drop in voter optimism, setting the previous Trump presidency record low of 32 percent.

That moment has featured prominently in former Vice President Joe Biden’s presidential campaign to restore “the soul” of the country. He mentioned it directly in his April 2019 launch video, and nodded to its themes during a Tuesday speech from Philadelphia on the latest civil unrest.

Trump has taken an aggressive stance toward demonstrators, on Monday threatening to deploy U.S. troops to American cities to quell the unrest.

While curfews are the most popular method for cities to address protests and demonstrations, a Morning Consult poll conducted May 31-June 1 found voters are comfortable with a militaristic approach, although those questions were framed in the context of cities — not the federal government — choosing that course of action to supplement local police forces. Seventy-one percent of voters said they supported cities calling in the National Guard to bolster local law enforcement, and 58 percent said they supported using the U.S. military.

Correction: Due to an editing error, the methodology statement in a previous version of the chart included in this story misidentified the starting point for data collection.