A delegate wearing a 'Trump 2020' face mask arrives for the start of the first day of the Republican National Convention at the Charlotte Convention Center on Aug. 24, 2020, in Charlotte, N.C. Morning Consult trend data shows that over the past month, approval for Trump's handling of the coronavirus has risen as the number of daily cases has dropped. (Chris Carlson - Pool/Getty Images)
By Cameron Easley

President Donald Trump is staring down a large polling deficit against former Vice President Joe Biden, and any potential comeback will rely on a lot of jigsaw pieces falling into the right place between now and November.

For one crucial piece — improving perceptions of how the country is faring against the coronavirus — Morning Consult trend data over the past month shows the president’s campaign has some reason for optimism: Positive sentiment regarding the president’s handling of the spread of the virus has ticked up since late July as concerns about COVID-19 have fallen.

With the number of daily new coronavirus cases dropping in recent weeks after their July 22 peak, so too has the level of alarm among voters about the pandemic. Between Morning Consult polls conducted July 23-26 and Aug. 21-23, the share of voters who say COVID-19 is a severe health risk in the United States has fallen from 66 percent to 59 percent.

The share of voters who say it is a severe health risk in their state has also fallen by 7 percentage points — from 47 percent to 40 percent — and the share who said the same of the situation in their communities has fallen 3 points, from 34 percent to 31 percent. (Each poll has a 2-point margin of error.) 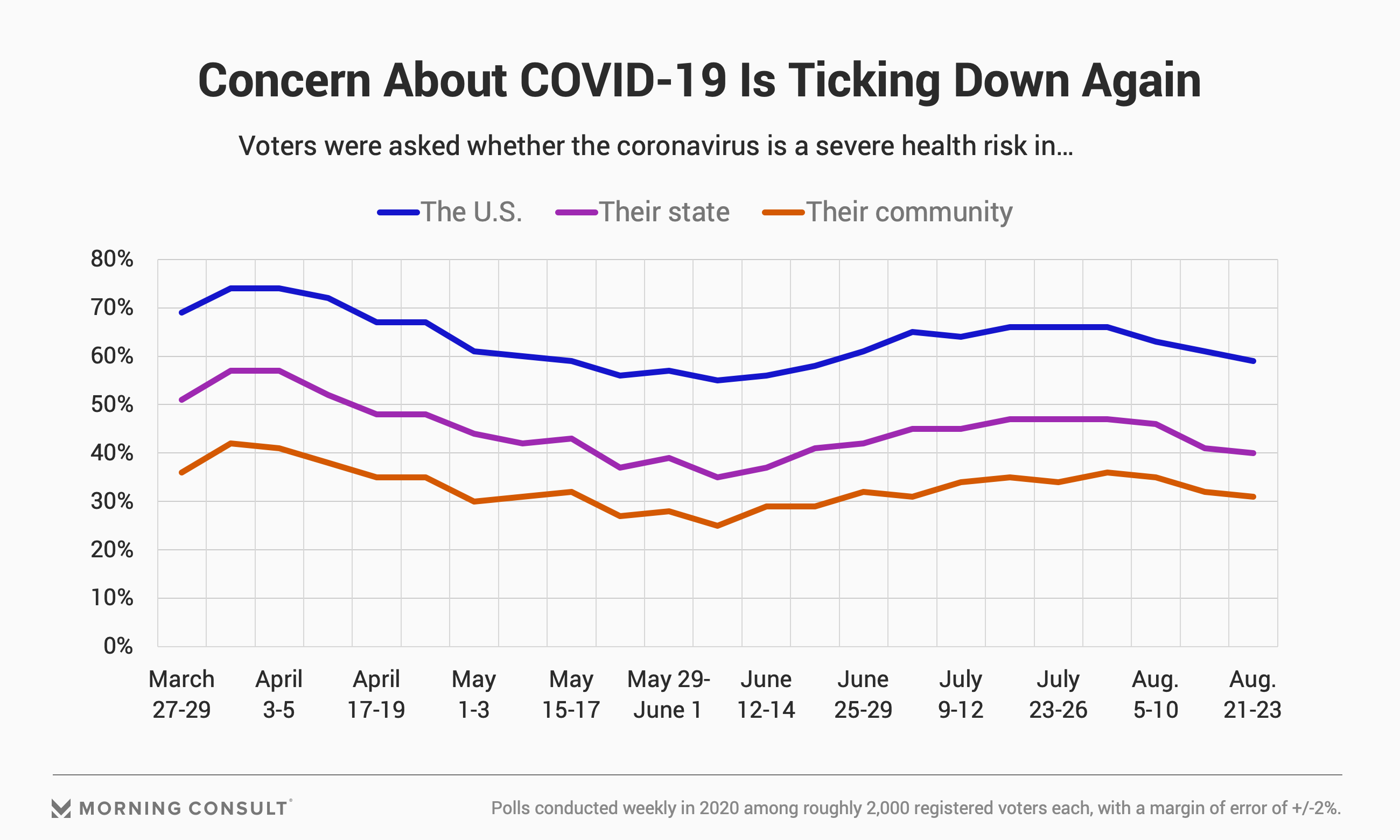 The July 23-26 poll came just after Trump began embracing face masks and advocated for their use, first in a July 20 tweet and then in a news conference the next day.

“Whether you like the mask or not, they have an impact,” he said. “They’ll have an effect. And we need everything we can get.”

The more unified health messaging has been credited by epidemiologists, along with business closures, as helping drive down the number of daily cases in the United States — and the drop in cases appears to be strengthening the president’s standing on the issue. 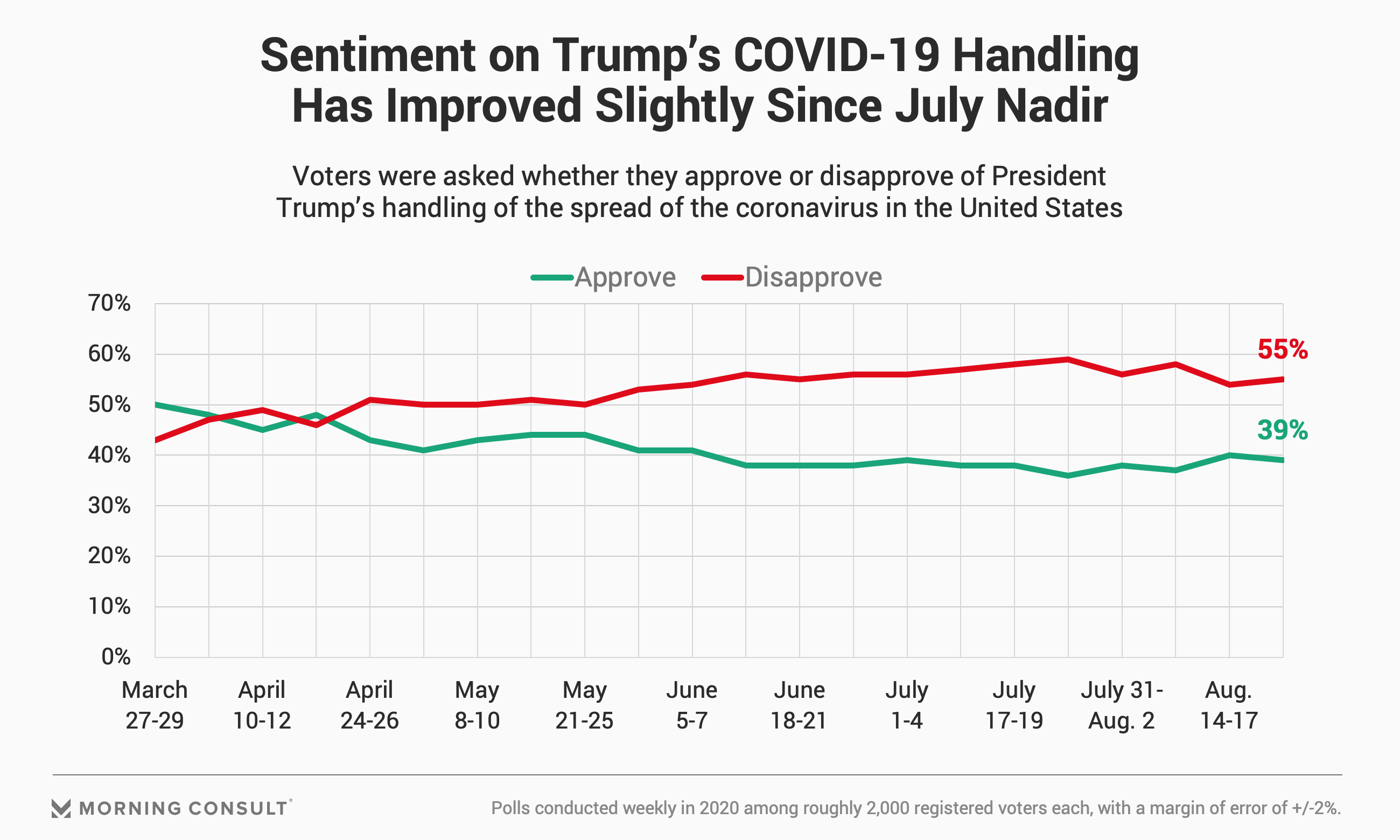 Trump has seen a modest uptick in sentiment toward his handling of the crisis since posting in the late July survey his worst coronavirus approval ratings (36 percent approval versus 59 percent disapproval) since Morning Consult began weekly tracking in February. Thirty-nine percent of voters in the latest poll approved of the way he’s tackled the spread of the virus, while 55 percent did not — figures that are within the margin of error of the previous week’s poll, when 40 percent approved and 54 percent disapproved.

This progress for the president, albeit slight and uneven, appears to be driven by movement among GOP voters and independents, who may be migrating back to the president’s corner after deserting him earlier this summer.

And while independents are decreasingly likely to say they disapprove of Trump’s handling of COVID-19, they haven’t necessarily moved into the “approve” column either: Most of that shift was fueled by an increase of unsure responses. 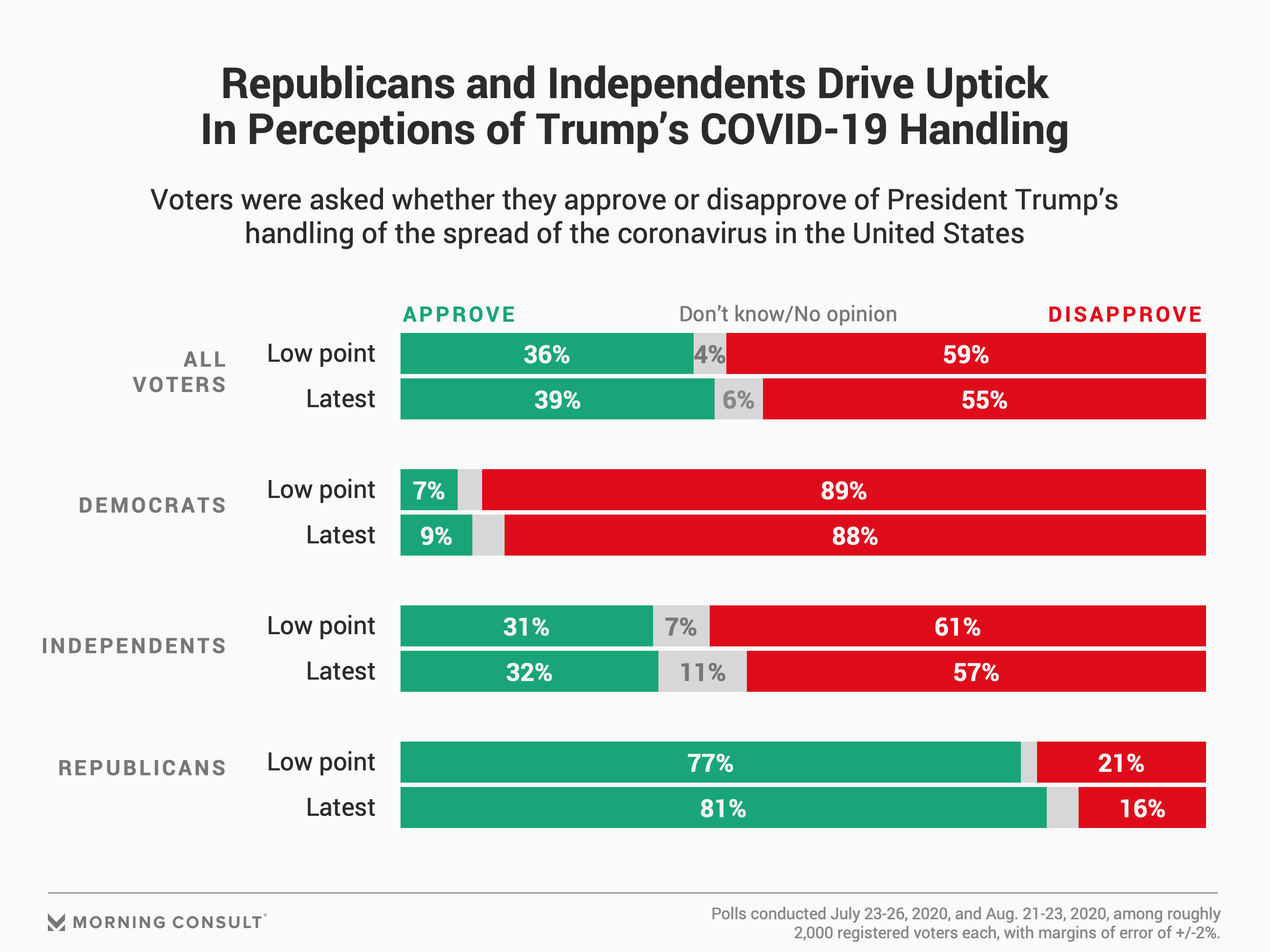 But with Trump trailing Biden by 10 points among likely voters nationwide, 42 percent to 52 percent, according to the latest Morning Consult tracking of the race, the decline in concern about coronavirus and apparent benefit to Trump’s image on the topic is welcome news for his re-election bid. And if cases continue to decline, his path to another four years in office becomes clearer.