How Race and Educational Attainment Factor Into Biden’s 2020 Lead

White voters backed President Donald Trump in droves in 2016, but four years later, Democratic presidential nominee Joe Biden is holding his own with the decisive voting bloc, which is compensating for his comparative softness among Black and Hispanic voters, who are supporting the Democratic candidate at a slightly lower rate this time around. 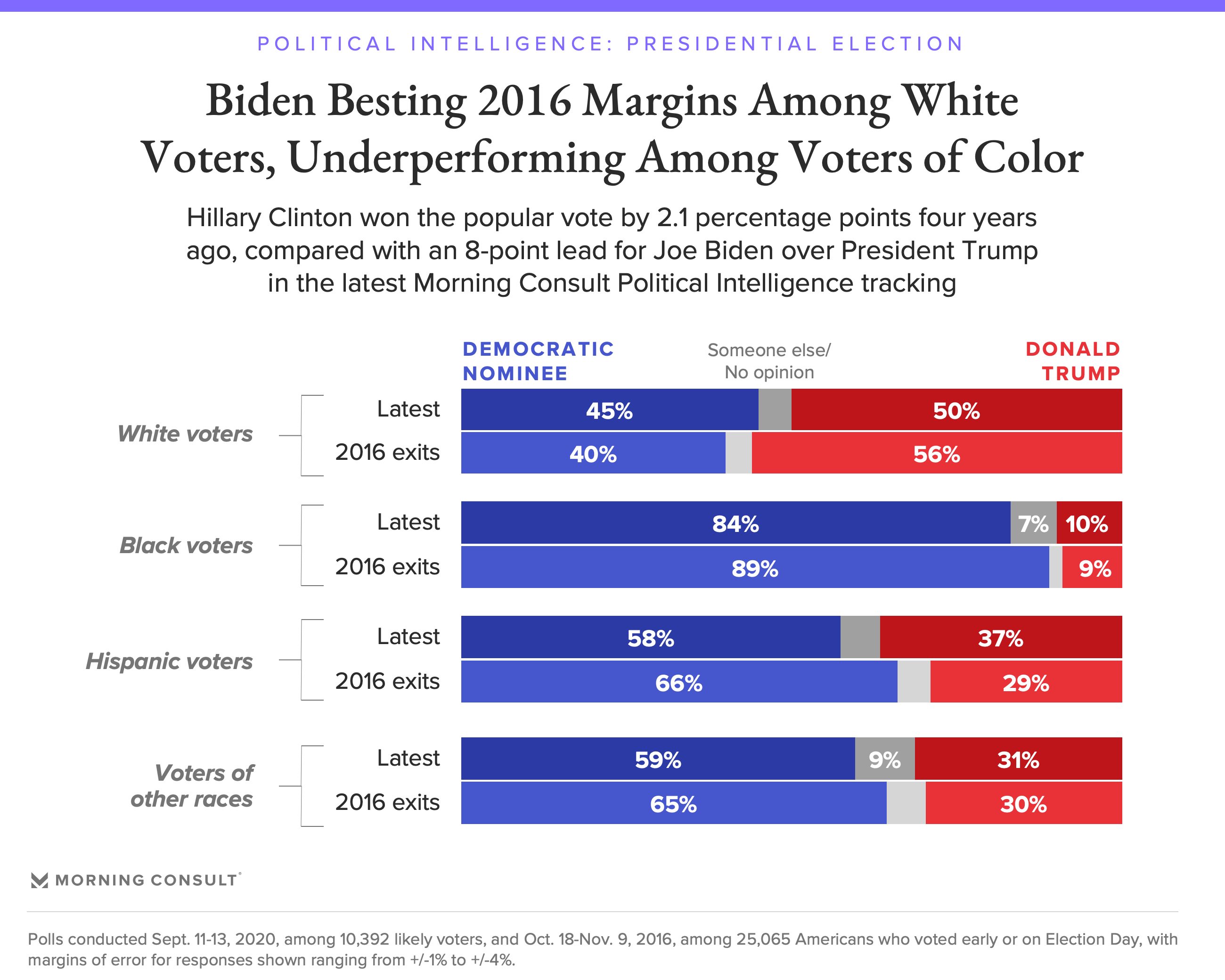 The narrower margin translates into an 8-point national lead for Biden among likely voters, despite underperformance among voters of color: The former vice president leads Trump among Black and Hispanic voters as well as voters of other races such as Asian Americans and American Indians, but does so by smaller margins than Clinton did four years ago. That performance gap among voters of color is strongest among Hispanics, whom Clinton won by a 37-point margin in 2016, compared with a 21-point edge for Biden in Morning Consult’s latest daily tracking. 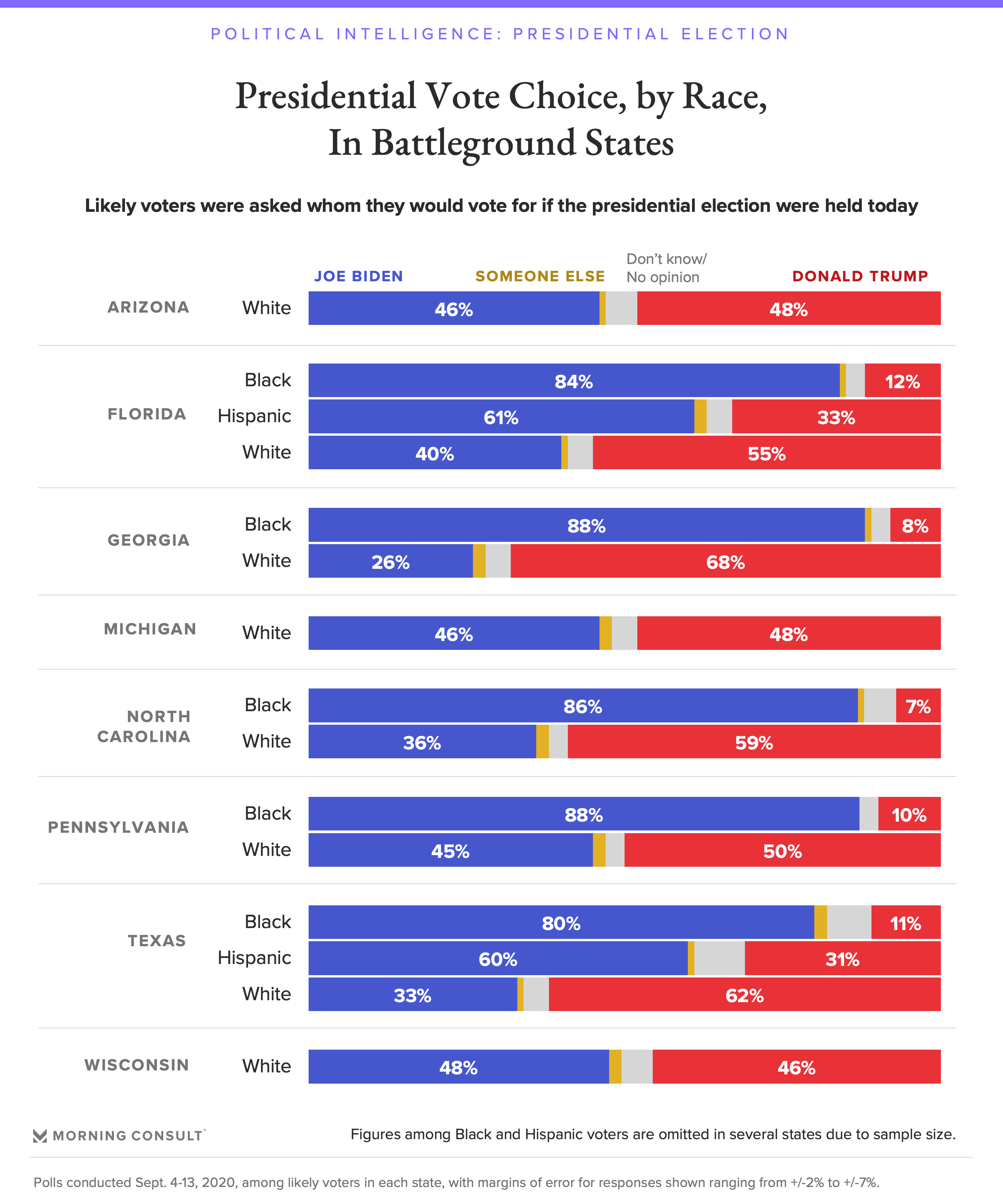 Biden and Trump roughly match their national standing among Hispanic voters in Florida, a state that could serve as an early Election Night knockout punch if carried by the Democratic challenger, and Texas, where Democrats face a more uphill climb in piercing a longtime presidential Republican stronghold.

The state tracking, conducted Sept. 4-13, found Biden’s support among Black voters is unflinching across key battlegrounds, including Georgia, North Carolina and Pennsylvania, where he was born.

The state of the race among white voters — heavily influenced by the educational divide between those with a college degree and those without — varies based on the map. In Arizona, Pennsylvania and the upper Midwest, college-educated whites tend to back Biden, pulling him fairly close to the president among the broader group. Traveling south, Trump performs better among college-educated whites in Florida, North Carolina and Texas. Those margins, combined with his edge among white voters without a college degree, swells the president’s advantage with the bloc.

Despite that advantage among so-called working-class white voters, a loss of their support appears to be driving Trump’s relative weakness among white voters compared to four years ago: The latest polling found he leads among whites without college degrees by 15 points, compared with a 37-point victory over Clinton in the 2016 election, according to CNN’s exit polling collected at the time.

The same trend is true on a smaller scale for white voters who did graduate college: After notching a 3-point win among those voters in 2016, he now trails Biden by 6 points. 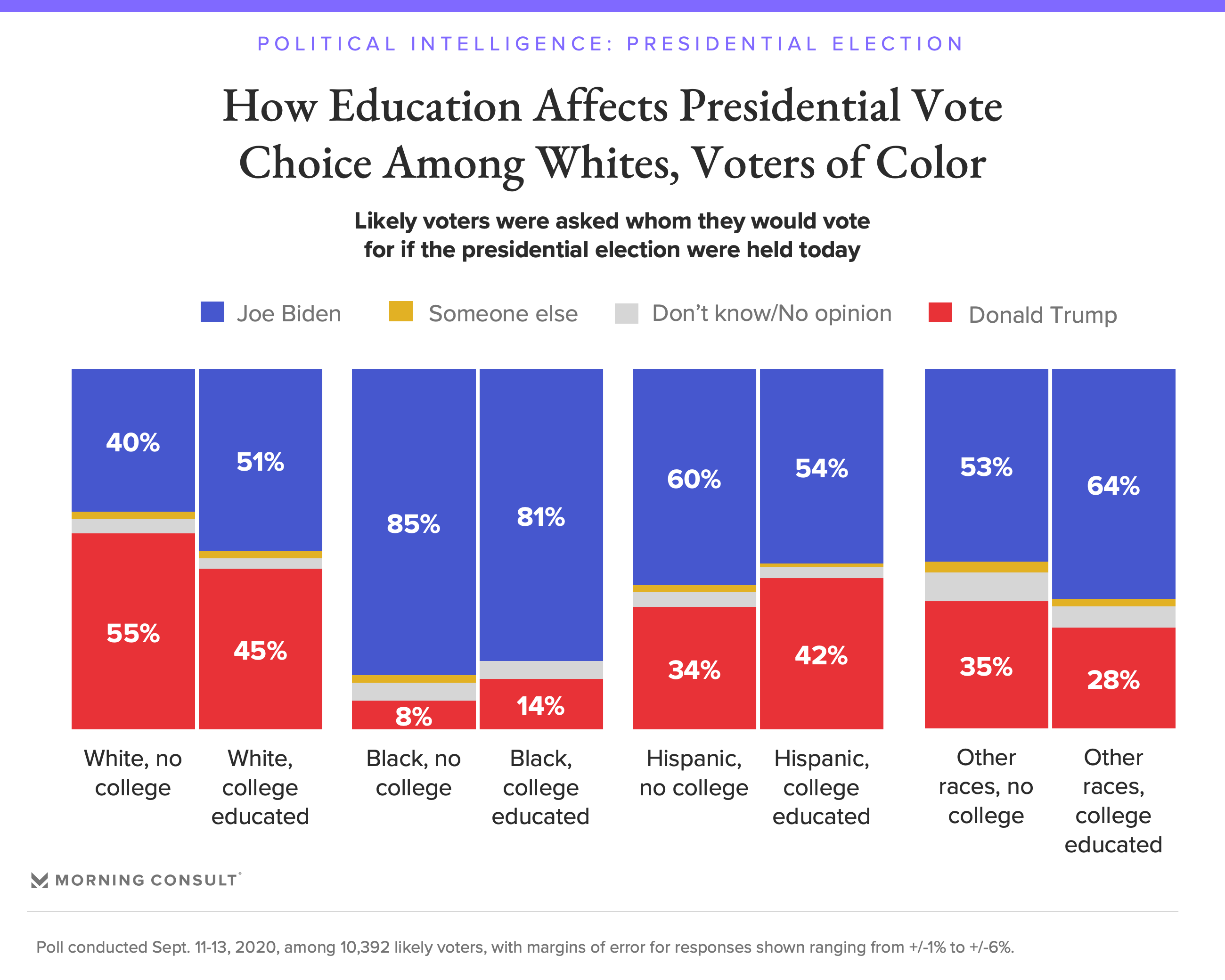 For voters of color, the educational divide’s impact on vote choice is muted by comparison. Black voters with college degrees are roughly as likely to back Biden as those without. Hispanic voters who did not graduate from college are slightly more likely to back the vice president than those who did, but not much more so, and there is little difference when accounting for education among voters of other races.

Such a divide is minimal among white voters but appears on the margins in the Black electorate: 86 percent of the Black voters over the age of 45 back Biden, while 82 percent of those younger than 45 years old support the former vice president. Younger Hispanic voters — and in particular, those with college degrees — are less likely than their older counterparts to say they would vote for Biden in November, while those of other races follow the direction of the overall electorate. 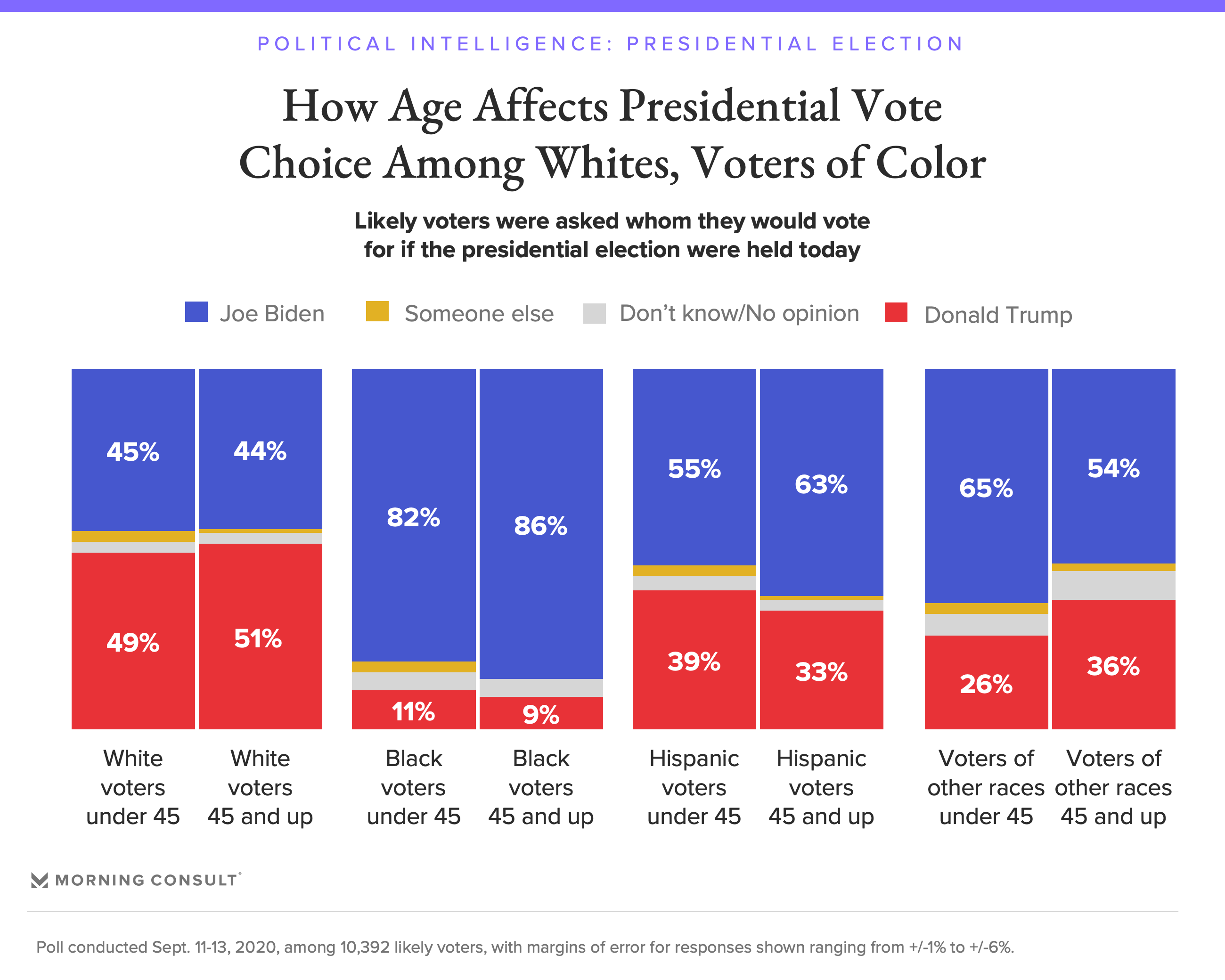