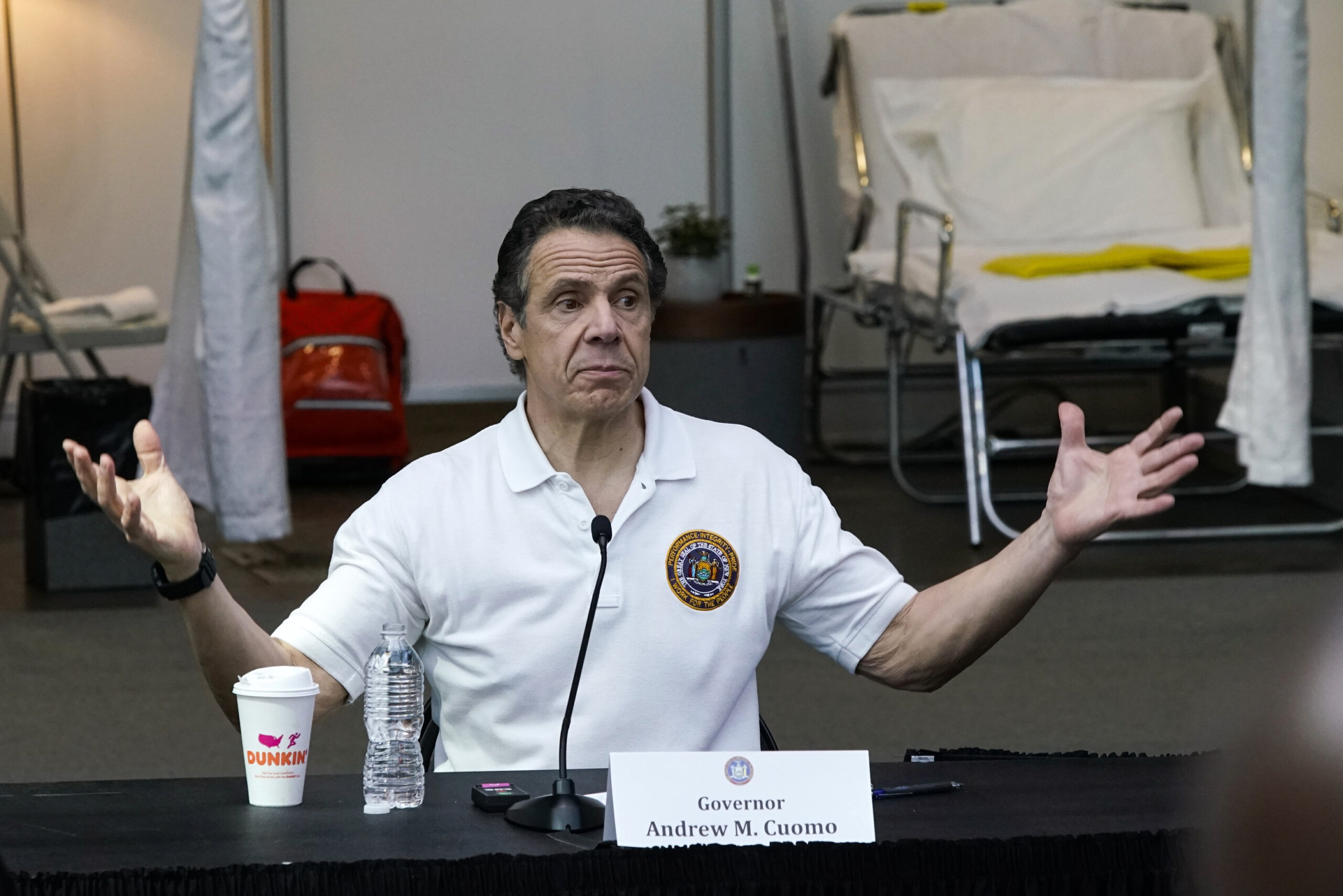 New York Gov. Andrew Cuomo’s handling of the COVID-19 pandemic brought him national acclaim and a surge of local support that held steady throughout much of 2020 and into 2021.

But a still-unfolding scandal involving his administration’s purported undercounting of coronavirus-related deaths in the state’s nursing homes is taking a toll on the third-term governor’s popularity, according to Morning Consult Political Intelligence tracking.

The latest polling, conducted Feb. 12-21 among 3,203 registered voters in New York, found 57 percent approve of Cuomo’s job performance, down 6 percentage points since surveys conducted Feb. 2-11, before the New York Post reported that a top Cuomo aide told state lawmakers that the governor’s staff withheld information about the true scope of nursing home deaths out of fear that the numbers would “be used against us” by federal prosecutors in the Trump administration. 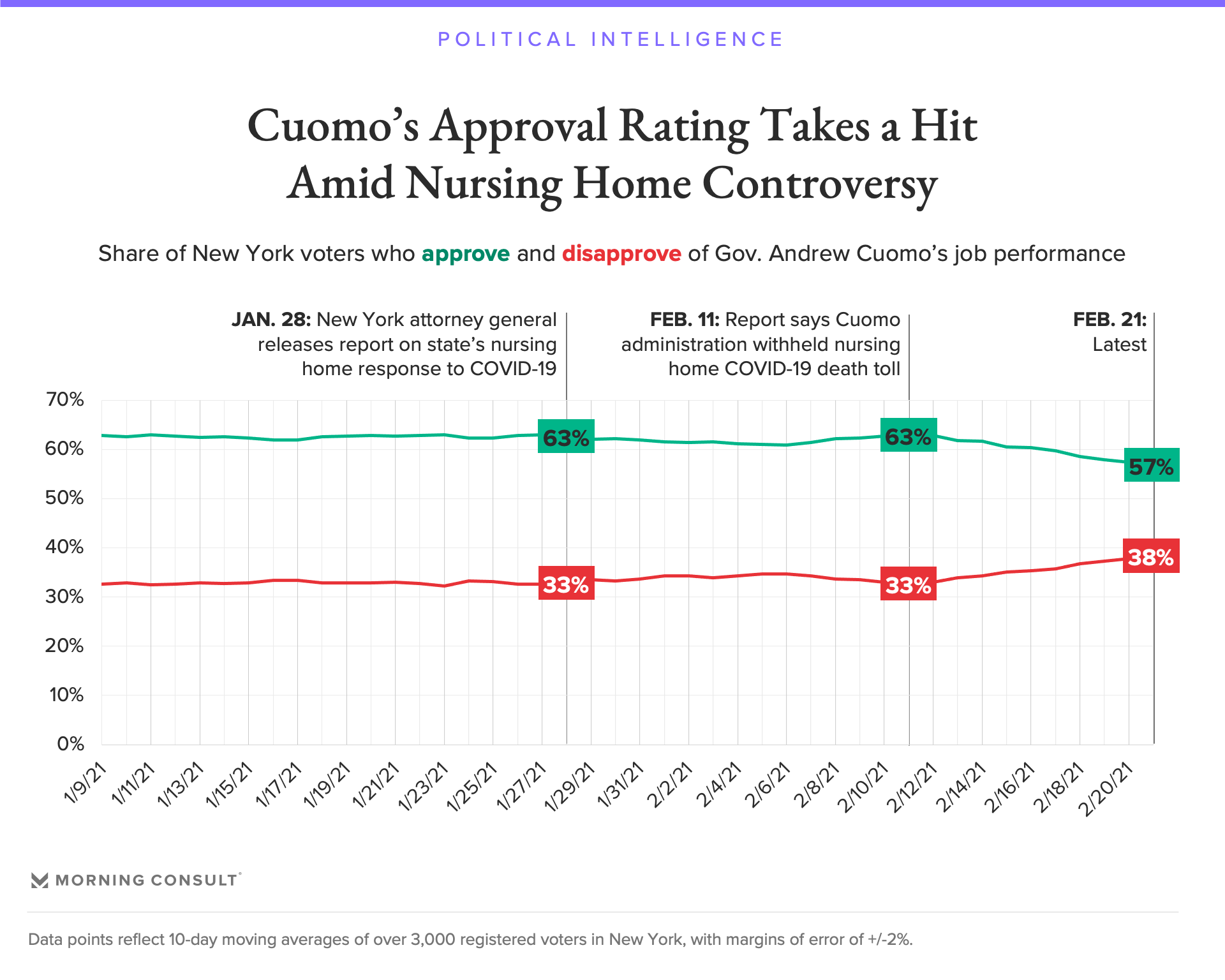 The share of New Yorkers who disapprove of Cuomo’s job performance also ticked up by 5 points — to 38 percent — in surveys conducted after the New York Post’s report, an indication that the appearance of a cover-up may be worse than the initial handling for some Empire State voters. By comparison, perceptions of Cuomo went unchanged in the aftermath of state Attorney General Letitia James’ Jan. 28 report that first revealed the undercounting of nursing home deaths.

Each poll has a 2-point margin of error.

Cuomo is still more popular than he was before the pandemic began. But the past 10 days have brought the governor his worst numbers since April, when he and a number of other state chief executives saw surges in popularity as they took active roles in tackling the virus. For Cuomo, the nursing home story may be snowballing into something more as he faces public allegations of political bullying from officials in his own party. 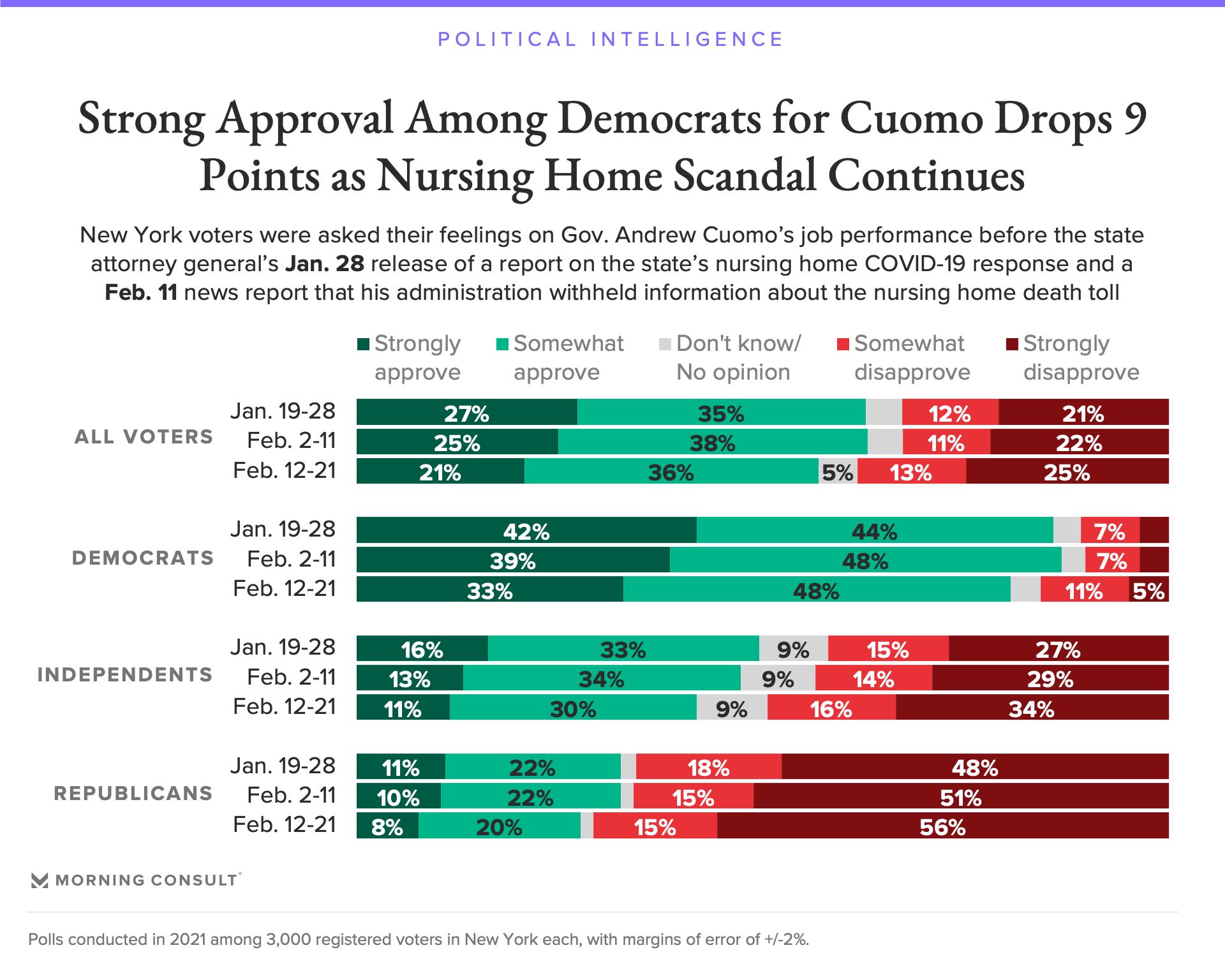 Cuomo – who has said he will seek a fourth term next year – retains the support of more than 4 in 5 Democratic voters in his state, but his grip on the base has softened since late last month. Thirty-three percent of New York Democrats in the latest polling “strongly” approve of Cuomo’s job performance, down 9 points from responses gathered Jan. 19-28, and nearly half “somewhat” approve.

Additionally, Cuomo’s approval among independents has fallen underwater for the first time since the start of the pandemic: According to the latest surveys, 42 percent of independent voters approve of Cuomo and 49 percent disapprove.