Biden Is Off to a Strong Start in Office. But Now Comes the Hard Part

57% of voters approve of his job performance, up slightly since he took office 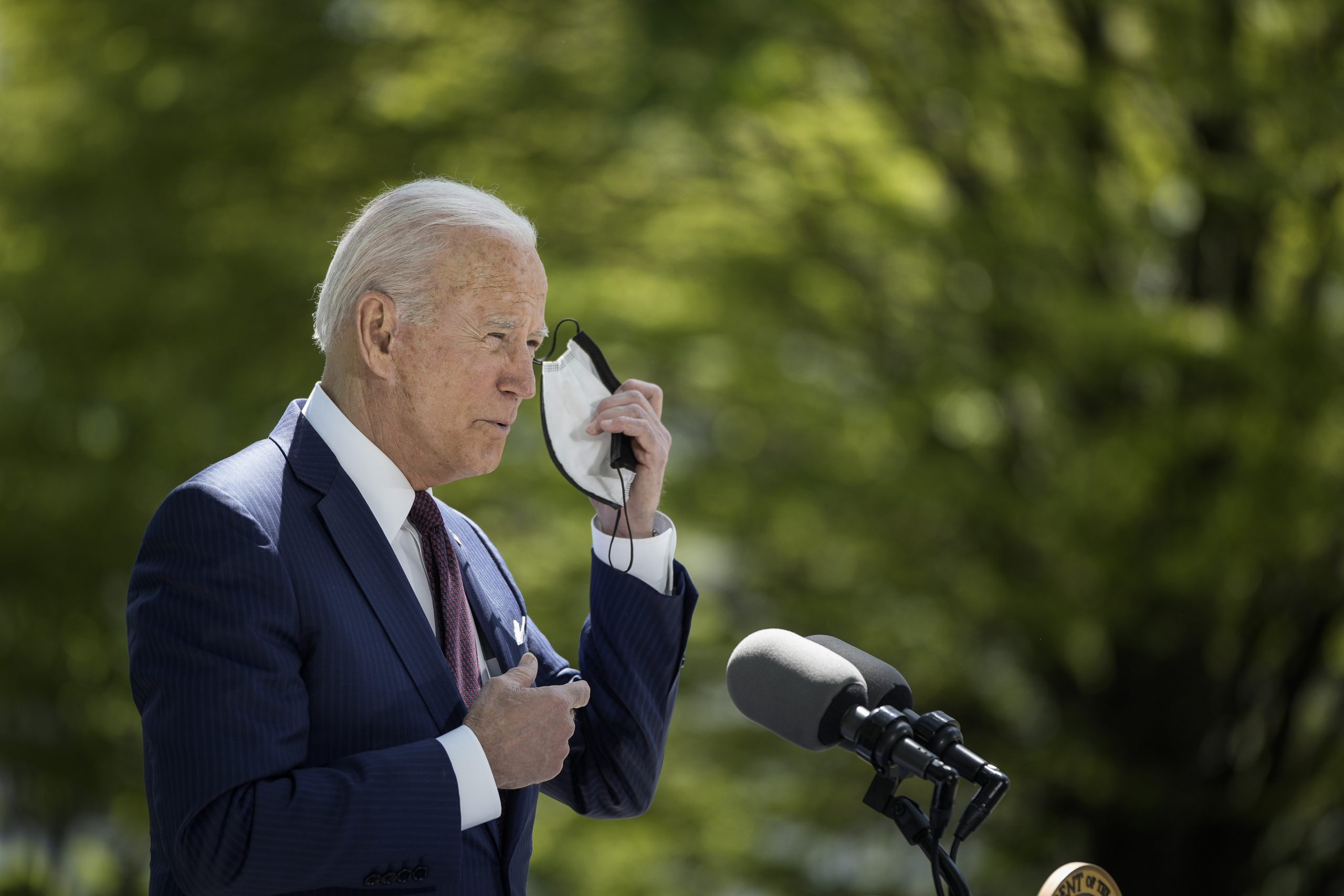 President Joe Biden removes his mask before speaking outside the White House on Tuesday. Polling shows voters believe Biden's first 100 days in office have been better than that of his predecessor, though only marginally. (Drew Angerer/Getty Images)
By Eli Yokley

In his first 100 days, President Joe Biden has retained the popularity that won him the White House as he shepherded a world-leading coronavirus vaccine rollout and enactment of nearly $2 trillion in economic relief spending, re-engaged globally on the climate crisis and Iran’s nuclear weapons program and pushed for unity in a country marred by widening divisions.

“He’s just all about action – all about getting things done, and not making it about himself,” said Democratic strategist Stephanie Cutter, the architect of the 2020 Democratic National Convention and the 2021 inauguration who’s currently advising a pro-Biden outside group, Building Back Together.

But as his presidency moves into its next chapter, strategists, history and polling suggest the hardest part is yet to come as Biden seeks to advance a broader legislative agenda and fend off the prospects of a midterm hangover.

Biden is leaving the traditional 100-day honeymoon phase with majority public support: According to Morning Consult Political Intelligence tracking conducted April 24-26, 57 percent of voters approve of his job performance, up 3 percentage points since surveys conducted immediately after he took office on Jan. 20. However, his disapproval rating has also ticked up 8 points, to 39 percent, as more voters formed opinions. 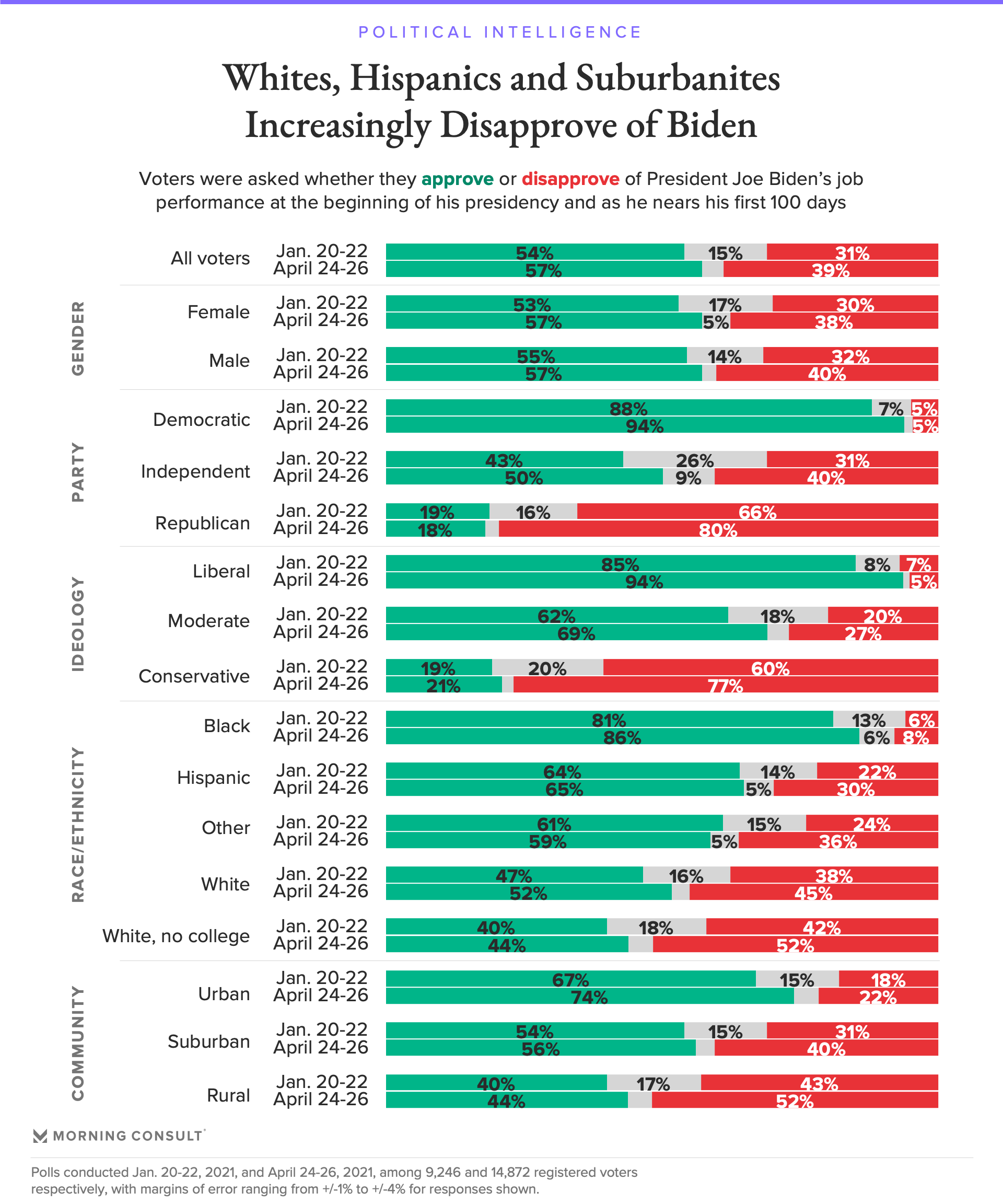 Both polls were conducted among more than 9,000 registered voters each.

While Biden remains on solid ground with Black voters, who were largely responsible for his victorious Democratic primary campaign last year, he’s increasingly in disfavor with white voters — particularly those without college degrees — and Hispanic Americans, though majorities of both still approve.

However, the overall numbers still place Biden on stronger ground than Trump at this point in their respective presidencies thanks to increasing partisan polarization: Biden has more backing from his own party than Trump did four years ago, and Republicans dislike the 46th president more than Democrats loathed No. 45.

Dr. John Woolley, co-director of the American Presidency Project and professor emeritus at the University of California Santa Barbara, said the immediate comparison represents a low bar for Biden to clear.

“Pick the least popular president in the history of scientific polling and compare the two,” he said. “Hmmm – Biden has got to like that standard.”

When comparing perceptions of Biden’s job performance to those of the four presidents before Trump, Woolley said Biden doesn’t look “really special one way or the other.” Data compiled by the American Presidency Project show Biden’s numbers at this moment more closely resemble those of Bill Clinton in 1993 or George W. Bush in 2001, rather than the sky-high numbers of Barack Obama’s first 100 days 12 years ago.

In addition to Biden’s job approval rating, a new Morning Consult/Politico poll asked voters to assign Biden a letter grade for a “report card” evaluating his performance in the first 100 days of his presidency – replicating a survey conducted almost exactly four years ago at the beginning of Trump’s tenure.

The April 24-26 poll of 1,991 registered voters found that, on average, voters gave Biden a “C+” overall for the first part of his term, slightly better than the “C-” that Trump received in 2017. 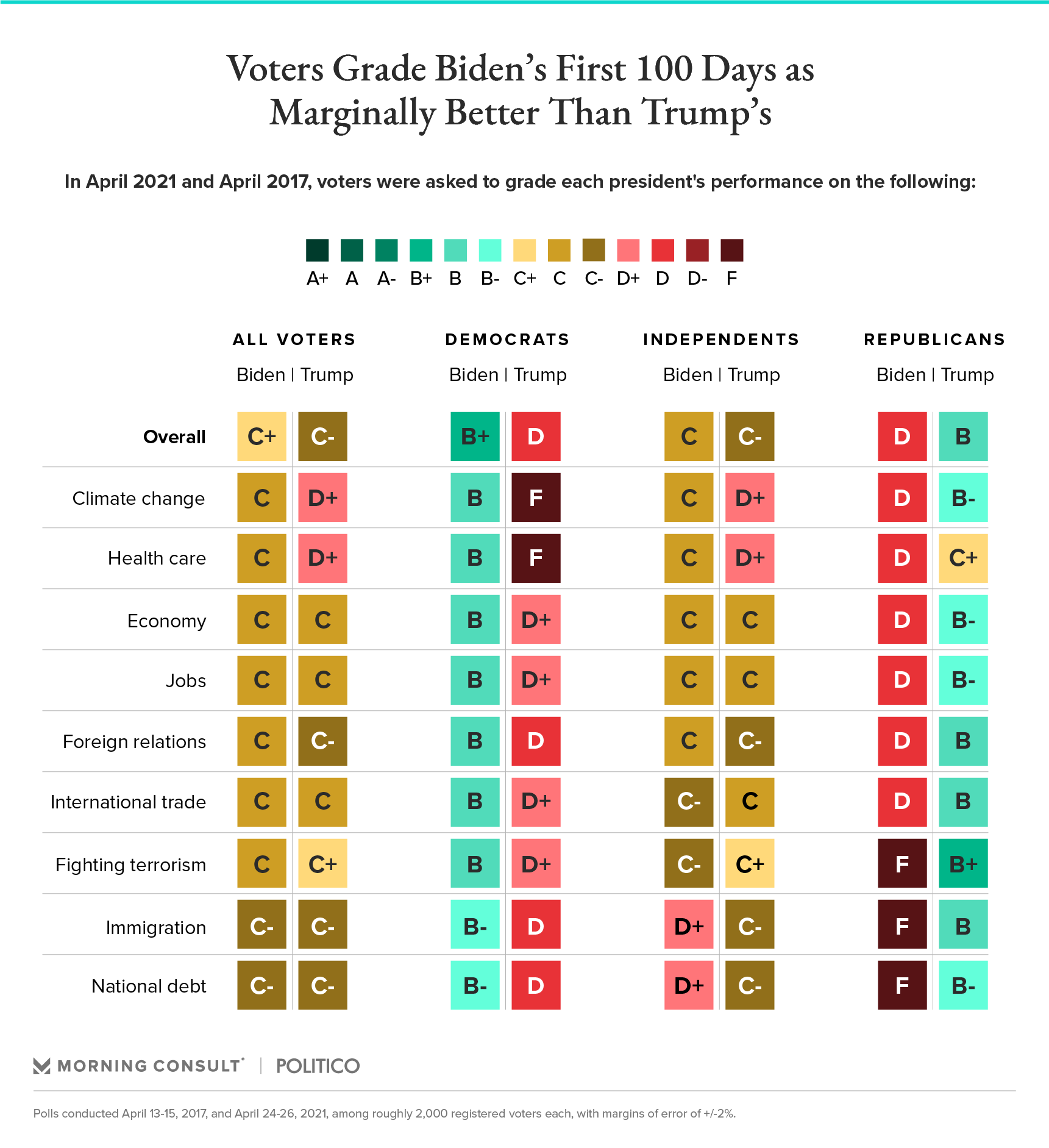 Biden received better marks on his general job performance than for how he’s handled a range of issues, including immigration, the national debt, climate change and health care. The gap between Biden’s “overall” grade and the grade point average on issues is wider than the rift measured in the 2017 survey on Trump’s 100-day mark, suggesting Biden’s personality holds a stronger appeal with voters than his policy positions, especially after the volatile tenure of his predecessor. However, some GOP strategists attribute the difference to lucky timing.

Whether or not the positive sentiment lasts will likely be key to the future of Biden’s presidency and that of his party as he enters a period that has been known to dim the radiance of a first-term American leader.

Midterm elections, typically cast as a referendum on the president, usually end poorly for the incumbent’s party, especially in the first term, with historical data showing an average loss of more than 30 House seats in the modern era. Even presidents who were significantly more popular than Biden at this stage, such as Obama, saw their approval ratings tank as the midterms neared.

“The feeling in D.C. on Obama was palpable on his approval ratings, and that’s what made it hard at first,” said Doug Heye, who led communications for the Republican National Committee during the 2010 midterm campaign. He compared the attacks Republicans faced at the time for opposing the 2009 stimulus to what the party’s lawmakers are facing today over their unified opposition to Biden’s COVID-19 recovery legislation. The GOP swept the House in 2010.

“We won 63 seats the next year when no one thought we had a license,” he said.

In 2022, thanks to the Democrats’ narrow majority, Republicans need to pick up just a sliver of that to win the House – something that will likely be helped along by decennial congressional districting.

Cutter, who worked for Obama at the White House before serving as his deputy campaign manager in the 2012 elections, said it’s difficult to compare the political situations faced by Obama and Biden, given the different types of crises they face and the moments that brought them to power. Plus, she said, this White House has the benefit of hindsight when it comes to dealing with Republican opposition from the Oval Office.

“When you’re in the White House,” she noted, “you don’t run ads, you’re dealing with multiple issues at all times during the day, so it’s more difficult to communicate.”

Alluding to the efforts of groups like hers and those of the Democratic National Committee to flex Biden’s early successes, she added, “I think the Biden White House understands that, and they’re being more aggressive about it, and there are a number of outside entities that are making sure people know what’s in these pieces of legislation and preventing any type of distortion of what these bills really do.”

So far, the American people like what they see from the White House on major issues such as the economy — and especially regarding the pandemic. The latest survey found 67 percent approve of Biden’s COVID-19 handling (including 35 percent of Republicans), up 6 points since he took office, marking his best issue area over the course of seven surveys conducted since inauguration.

The ample support among Republican voters for the coronavirus bill has helped the White House assume the mantle of bipartisanship and unity situated at the core of Biden’s inaugural pitch.

“They’re basically saying: We’re not going to allow something to not be called bipartisan if it is supported by a majority,” said Democratic strategist Adrienne Elrod, who worked for Biden’s campaign last year and Hillary Clinton’s in 2016. 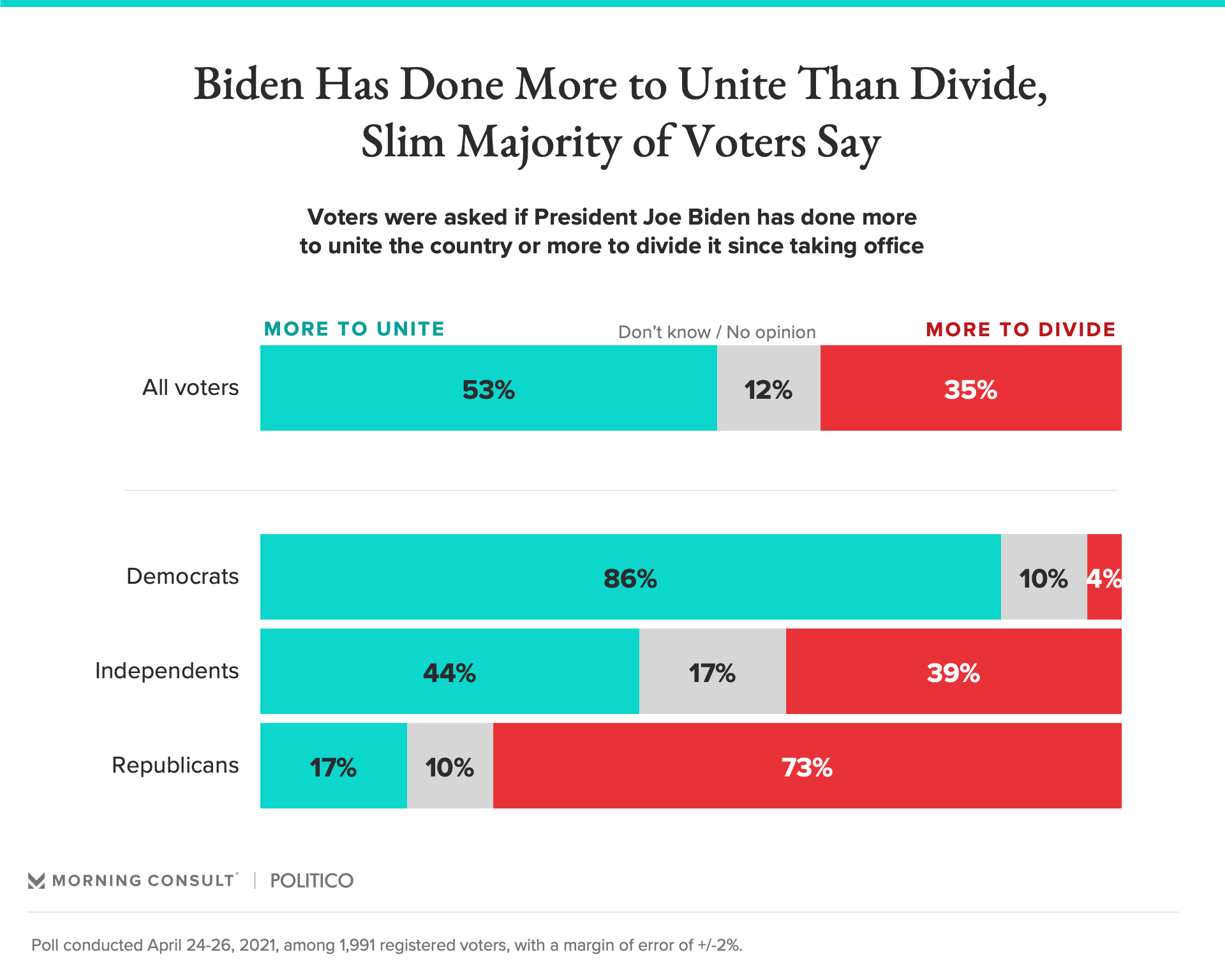 At the 100-day mark, the majority of voters (53 percent) said they believe Biden has done more to unite the country than divide it, just 1 point above his vote share in the 2020 election.

With a few months of work behind him, Biden’s future issue portfolio looks more complicated. His massive infrastructure and social spending measures – which are reviving the kind of Republican chatter on debt and deficits that conveniently re-emerge under Democratic presidents – have less support from Republican voters than the COVID-19 package, and Biden generally has weaker public support on issues like immigration, where Republicans have been working to shift the conversation and Democrats on Capitol Hill aren’t clearly unified. 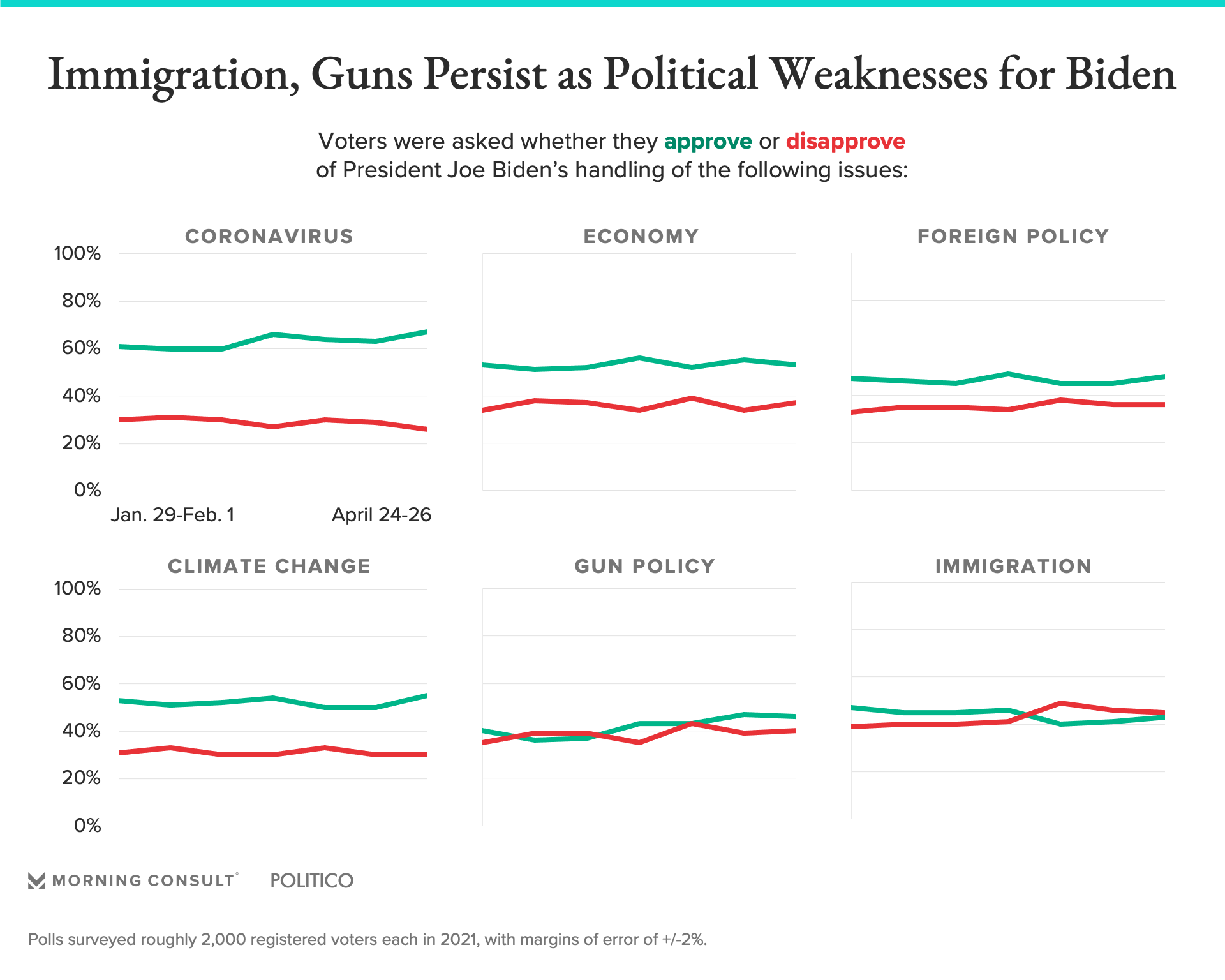 Approval of Biden’s handling of immigration dipped underwater amid coverage of a surge of migrants at the U.S.-Mexico border, and it remains his weakest issue as activists and Democrats on Capitol Hill continue to push for comprehensive immigration reform and to reverse Trump’s policies and allow more refugees into the country.

Polling suggests the issue of immigration is an increasing priority for voters, which could serve as a warning of how quickly the political situation can change for a popular president.

“I think Biden’s numbers are going to remain pretty static for a while, in part because people feel better about things – we can go to restaurants again, and people are getting shots,” Heye said. “Is that the argument in 18 months?”