How the World Sees America Amid Its Chaotic Withdrawal from Afghanistan

United States’ standing falls in 7 out of 14 foreign countries tracked by Morning Consult since Aug. 14 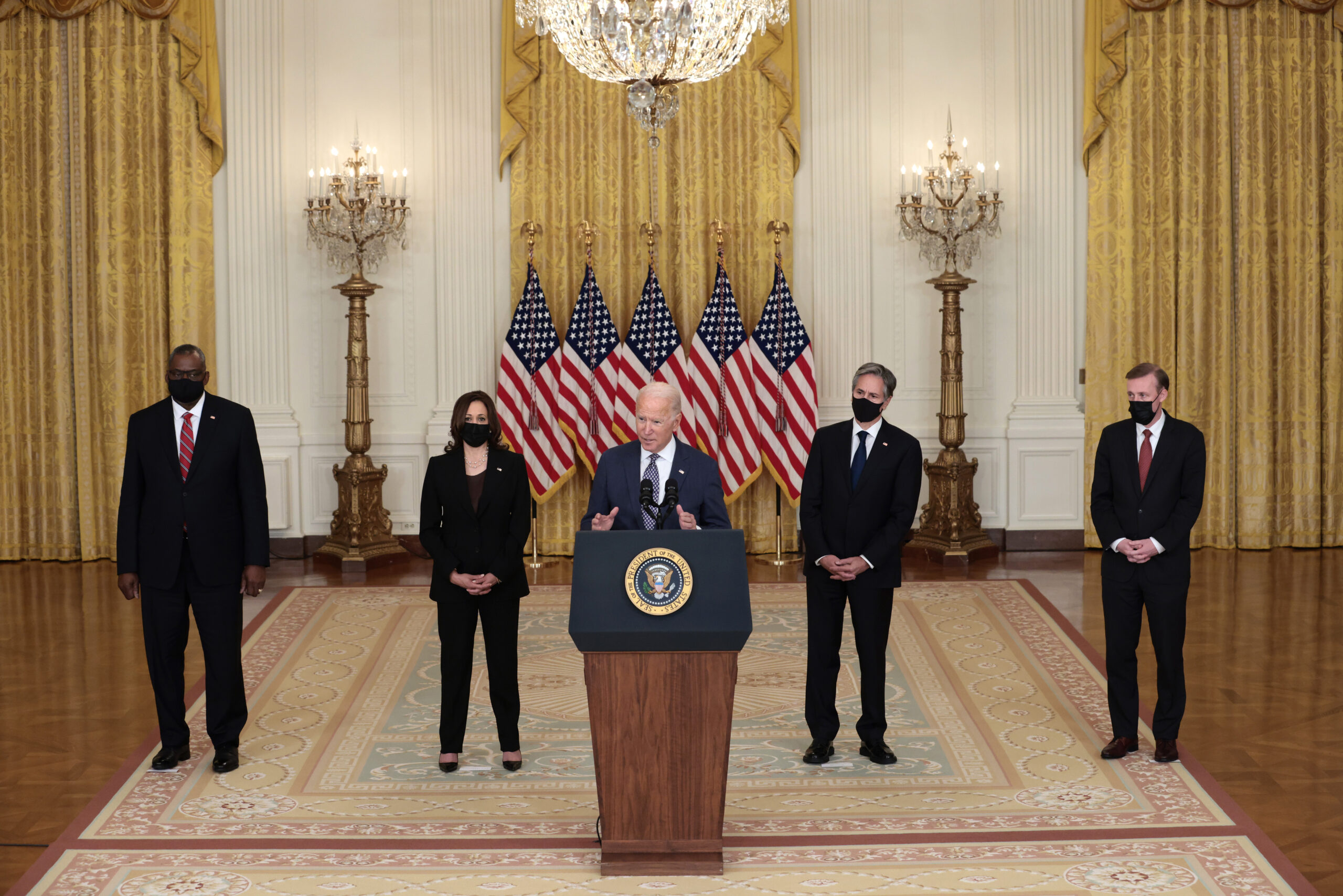 President Joe Biden delivers remarks on the U.S. military’s ongoing evacuation efforts in Afghanistan, alongside Secretary of Defense Lloyd Austin, Vice President Kamala Harris, Secretary of State Antony Blinken and White House national security adviser Jake Sullivan on Aug. 20, 2021, in Washington, D.C. According to Morning Consult Political Intelligence tracking globally, sentiment about the United States has worsened outside the margin of error in 7 of the 14 other nations surveyed since the day before Kabul fell to the Taliban on Aug. 15. (Anna Moneymaker/Getty Images)
By Eli Yokley

The recent chaos in Afghanistan prompted by the Taliban’s takeover of Kabul and much of the rest of the country as the United States prepares its final exit has taken a toll on America’s reputation in half of the 14 foreign countries that Morning Consult tracks, with one of the steepest drops seen in one of its closest allies.

Since Aug. 14, the day before Kabul fell to the Taliban, global Morning Consult Political Intelligence data shows that sentiment about the United States has worsened outside the margin of error in seven nations. One of the largest hits to the United States’ reputation came among residents of the United Kingdom – a country that contributed mightily to the U.S.-led war effort for the past 20 years and has pushed back on the hasty withdrawal.

According to surveys conducted Aug. 18-24, America’s net favorability rating (the share of adults with a favorable view of the United States minus the share with an unfavorable view) fell 10 percentage points in the United Kingdom since Aug. 8-14 polling – the biggest decline to America’s global reputation in every place surveyed except for China. 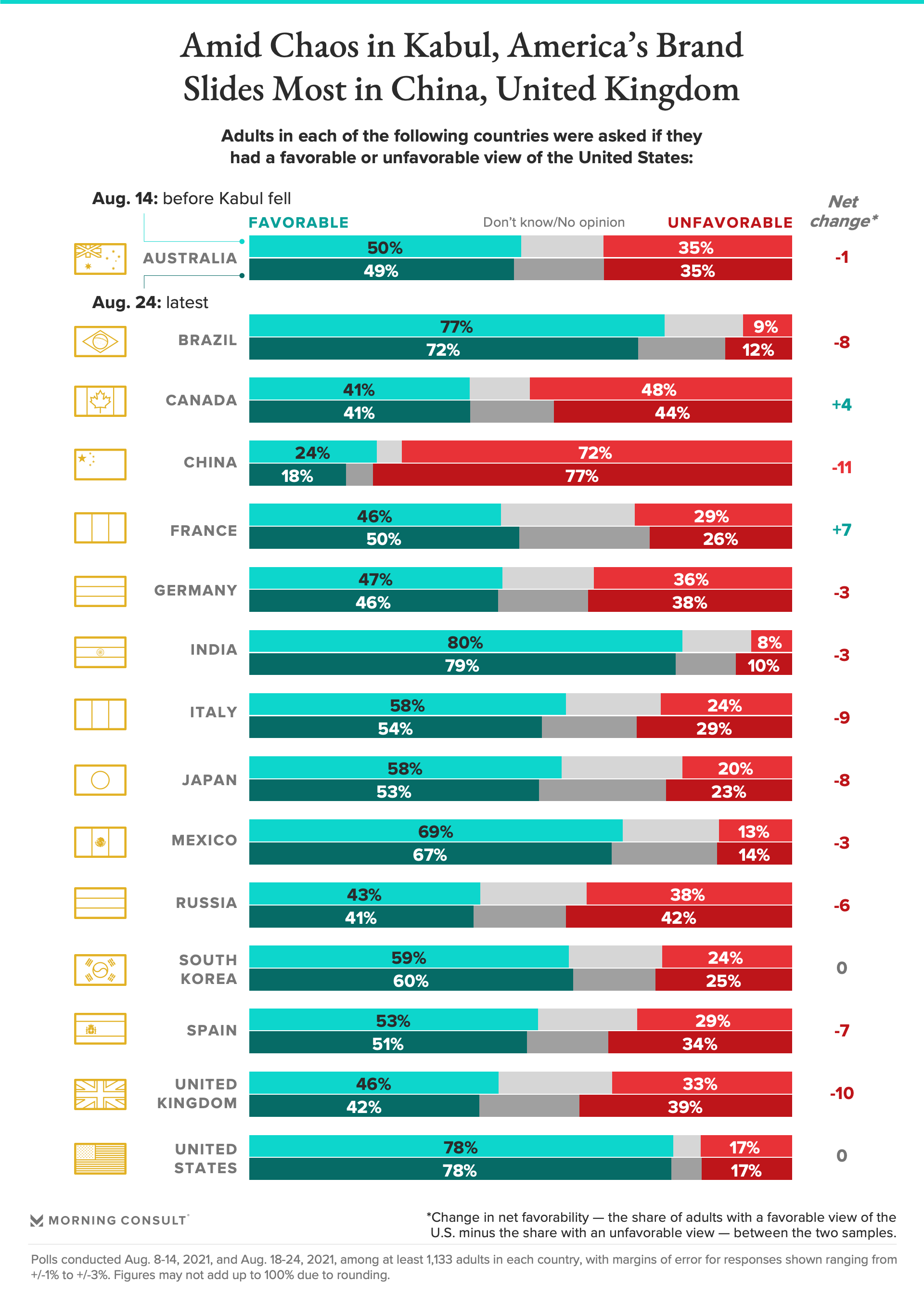 America’s brand is still above water in most countries, even though in places such as Brazil, Italy, Japan and Spain, sentiment about the United States fell notably over the past several days as the world reacted to scenes of a chaotic withdrawal and brewing refugee crisis that put the haste of President Joe Biden’s decision to pull U.S. troops from Afghanistan into question.

Favorable views about the United States improved slightly in France since the fall of Kabul, where half of adults view the country positively despite pressure on Biden from French President Emmanuel Macron to extend the withdrawal deadline.

Over the same time period, the share of Canadians with unfavorable views declined by 4 points, to 44 percent, while the 41 percent with favorable views went unchanged. 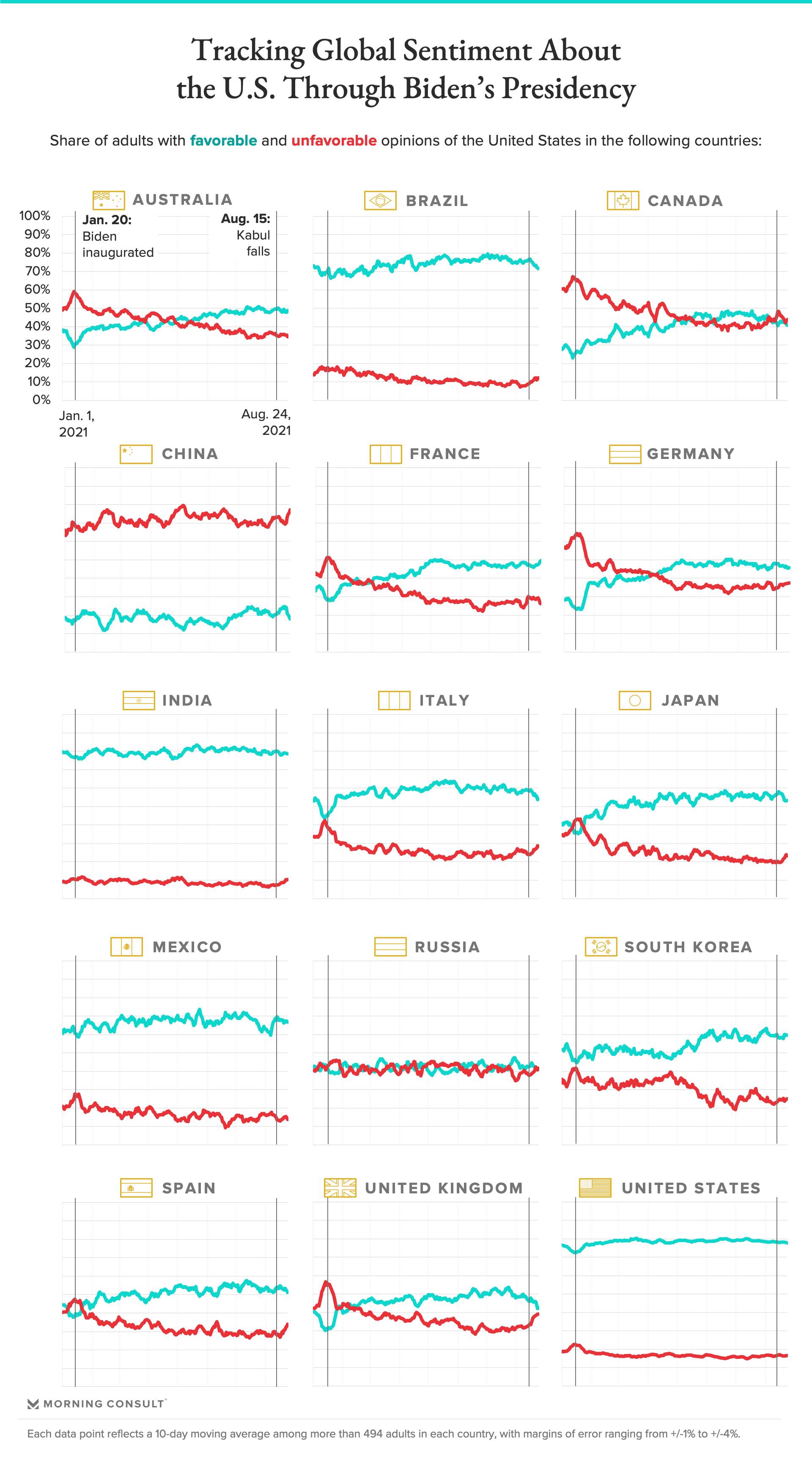 While the recent events in Afghanistan have hurt America’s reputation in some places, views about the United States are still better than Biden where found them when he took office on Jan. 20 in 11 of the 14 foreign countries tracked, and adults in many of those countries appear less reactive than they were to Biden’s election, the Jan. 6 insurrection or the president’s first 100 days.

Things have gone largely unchanged in India (where views have held solidly positive) and Russia (where views are almost evenly split), while sentiment has declined further in China, where 77 percent of adults hold unfavorable views of the United States – up 11 points since the January surveys.

When Americans hold up a mirror to themselves, they still like what they see: 78 percent of U.S. adults hold favorable opinions about the United States, unchanged from the day before the fall of Kabul and up 5 points since Biden took office, while the share with unfavorable views has fallen by a similar share.