Florida and Texas governors have seen drops in support from independents, Democrats

Two Republican governors famed for their antagonistic approach to some COVID-19 safety measures have seen their popularity decline this summer as they presided over some of the country’s worst COVID-19 spikes. But for Florida Gov. Ron DeSantis and Texas Gov. Greg Abbott, the virus’s toll has hardly hurt either of them with their party’s base as they look toward their political futures.

According to Morning Consult Political Intelligence polling conducted Aug. 21-30, 48 percent of voters in Florida and Texas approve of their governor’s job performance, while similar shares disapprove. The downturn since daily polling that concluded on July 1, before COVID-19’s delta variant spread rapidly across their states and prompted concerns about accessibility of hospital beds and oxygen, has been especially stark for DeSantis. 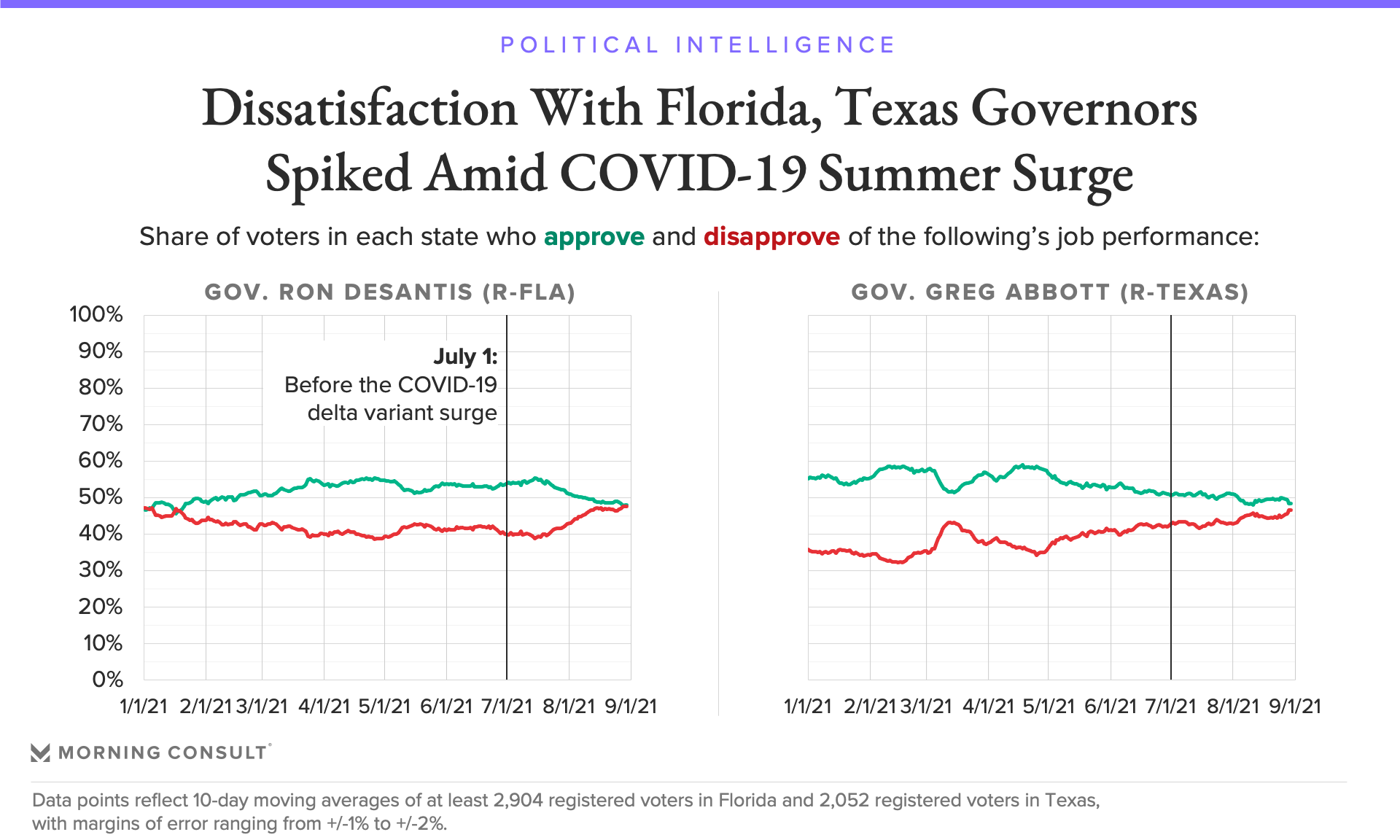 The first-term Florida governor’s net approval rating – the share of voters who approve of his job performance minus the share who disapprove – has fallen 14 percentage points since the beginning of July, larger than the 7-point drop in sentiment about Abbott over the same time period.

While the two states are not alone in falling victim to the especially contagious coronavirus variant, their governors – DeSantis, a conservative star up for re-election next year who is seen as a potential GOP presidential front-runner in 2024, and Abbott, prominent in his own right as the leader of America’s second-largest state – have taken on a great deal of attention for how they’ve handled it.

DeSantis, who took some heat from conservatives for after encouraging people to get vaccinated, doubled down on his opposition to mask mandates as the delta variant spread – even targeting funding for public schools that would defy him and require students to cover their noses and mouths in class. Abbott, too, has crusaded against mask requirements, and barred COVID-19 vaccine mandates even after the Pfizer Inc.-BioNTech SE shots were granted full approval by the Food and Drug Administration.

While the pandemic alone may not entirely explain the shape of public sentiment in their states, the governors’ tactics over the past two months appear to have alienated independent voters, who largely disapprove of DeSantis’ and Abbott’s job performance. As with the top-line trend, the erosion was stronger with regard to DeSantis, who until early last month had spent much of Biden’s presidency above water with unaffiliated voters in his state.

But the approaches of both governors appear to be doing the trick when it comes to appeasing the vocal Republican base in their states. 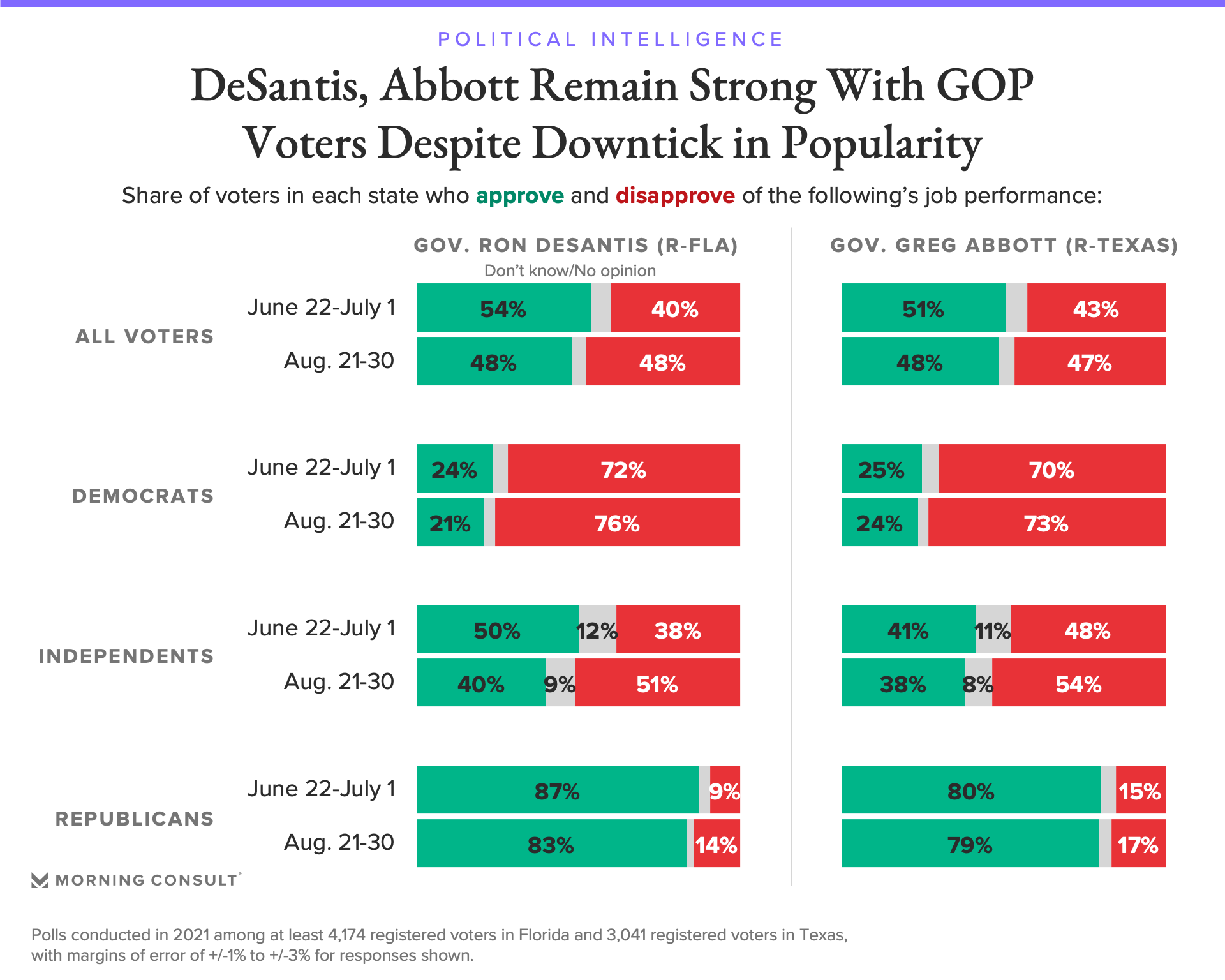 Roughly 4 in 5 GOP voters in Florida and Texas approve of their Republican governors. The figure has dropped slightly for DeSantis (from 87 percent to 83 percent) since July 1, while it went virtually unchanged for Abbott (from 80 percent to 79 percent).

Most Republican voters in Florida (59 percent) still “strongly” approve of DeSantis — down 7 points over the course of two months but more than 10 points above where he began the year.

In Texas, where Abbott is facing at least two major conservative challengers for re-election next year, the incumbent is a bit weaker with the GOP base compared with DeSantis: 42 percent of Republicans strongly approve of his job performance, compared with 47 percent who did so at the beginning of July.