Morning Consult’s latest economic intelligence shows that real spending growth slowed in August as consumers held firm on overall spending from the previous month even as household budgets were increasingly strained by inflation. Based on recent precedent, this development likely points to slower inflation-adjusted growth last month in retail and food services sales figures from the U.S. Census Bureau (“Census” in the chart below) and personal consumption expenditures (PCE) figures from the Bureau of Economic Analysis (BEA), both of which are set to be released later this month. 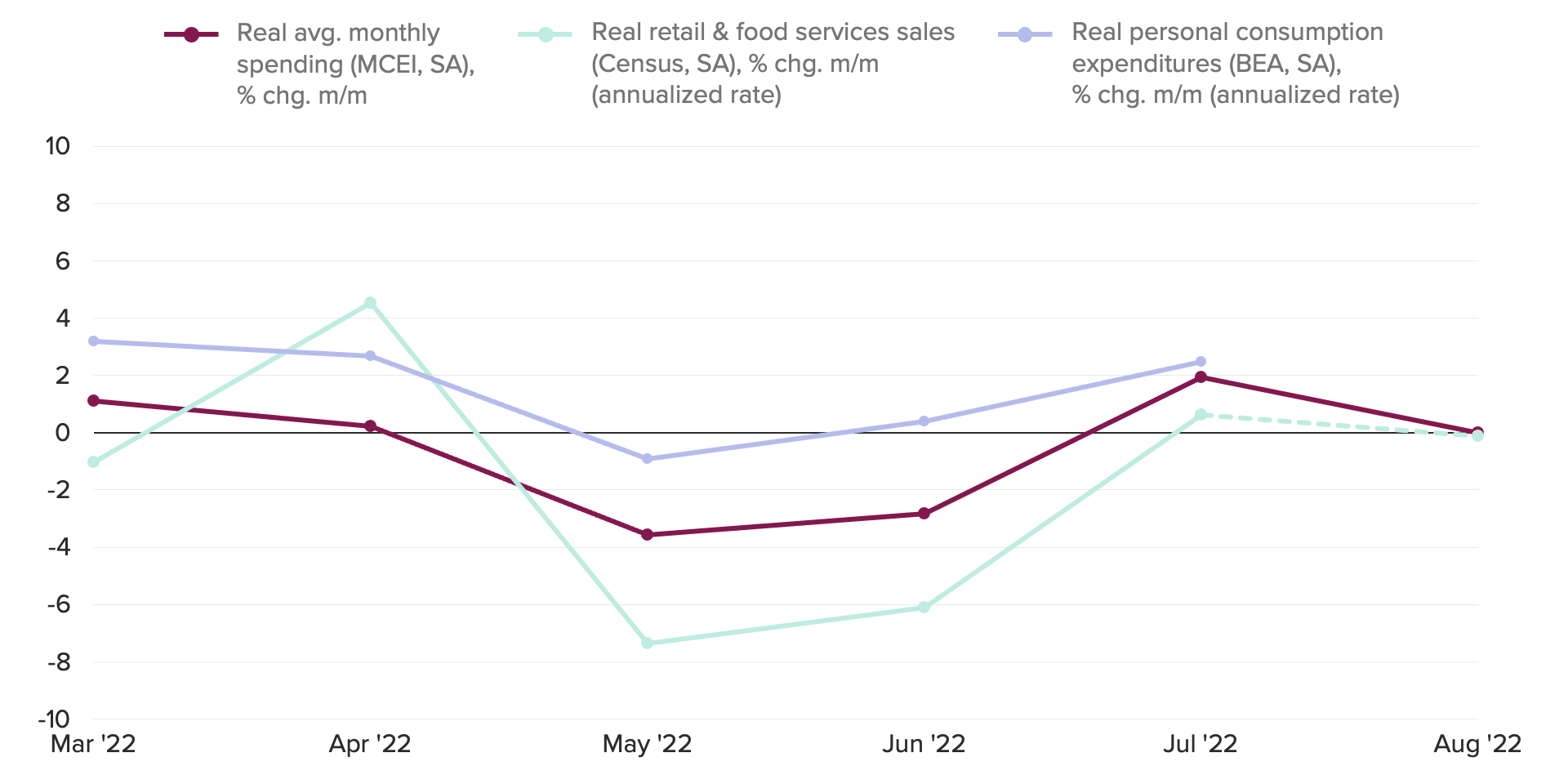 Sources: Bureau of Economic Analysis, Census Bureau, Bureau of Labor Statistics, Morning Consult Economic Intelligence. Retail sales and Morning Consult’s spending data are deflated with the CPI, while PCE is deflated using its own price index. August retail sales are based on consensus estimates from Bloomberg.

Since March of this year, Morning Consult’s real spending growth measure has tracked closely with monthly changes in both real PCE (correlation coefficient of 0.93) and real retail and food services sales (correlation coefficient of 0.81). The correlation is not quite as strong with retail sales since they do not include the broader set of services captured by both Morning Consult’s spending data and PCE. Set to be released later this week, real retail and food services sales are also expected to be flat in August according to consensus forecasts from Bloomberg. Components of this measure are used by the BEA to produce PCE, such that little to no growth in it would further confirm the signal indicated by Morning Consult’s data.

Below, we take a closer look at the drivers of the slowdown in spending growth in August, focusing on the role played by inflation. The Consumer Price Index increased slightly in August, but when measured from the year prior it was up 8.3% — slower than the 8.5% pace registered in July. Morning Consult’s Consumer Purchasing Power Barometer in August signaled a resurgence in both price sensitivity (willingness to walk away from a purchase) and substitutability (willingness to trade down to cheaper alternatives), suggesting that despite the welcome reprieve from falling energy prices in recent months, inflation nonetheless continues to squeeze consumer budgets.

The modest gain in Morning Consult’s real spending measure in August reflects a combination of competing factors currently influencing consumer demand: 1) Inflation remains historically high; 2) the labor market remains robust, but purchasing power continues to be eroded as real incomes decline under the weight of elevated inflation; and 3) household savings are high and debt is low, but utilization of savings and credit is picking up. Understanding how consumers’ spending decisions have shifted at the point of purchase in response to these dynamics helps illuminate their likely effect on future spending.

Morning Consult’s Consumer Purchasing Power Barometer — a measure of overall spending power — provides insight into how consumer behavior has evolved in recent months in response to elevated inflation. The CPPB comprises two components: Price Sensitivity (“sticker shock”) and Substitutability (“trading down”). Higher rates of sticker shock mean that more would-be consumers are walking away from purchases in the face of higher-than-expected prices, while higher rates of trading down signal that more consumers are buying lower-priced substitutes. In the graphs below, the signs are reversed so that greater sticker shock and trading down reflect their association with lower spending growth.

Source: Morning Consult Economic Intelligence. The CPPB is calculated by multiplying the Price Sensitivity Index values for each month by -1/3 and the Substitutability Index values by -2/3 and adding them together. Morning Consult’s spending data is adjusted for inflation using the CPI and seasonality using seasonal factors from the Census Bureau.

Monthly changes in real average spending have followed the CPPB’s trajectory since tracking began in March 2022, with the CPPB tending to lead spending changes by one month. As rising inflation consistently outpaced wage growth earlier this year, consumers increasingly reported declining purchasing power (particularly higher rates of sticker shock), and real spending gradually contracted. In July, falling gas prices and declining inflation appear to have provided some relief to consumers, who expanded purchases and relaxed their focus on trading down to cheaper alternatives. In August, however, both sticker shock and trading down behavior picked up again, driving down the CPPB alongside decelerating spending growth.

As variable expenses transitioned from summer travel toward back-to-school shopping for many households, spending priorities shifted. For instance, consumers spent more on education and apparel in August than in July, but they were also more likely to report trading down in these categories. This combination of outcomes highlights the tricky balance U.S. households are currently facing as historically high inflation persists: While many consumers still have the means to execute essential purchases, they are not immune to the pinch of high prices — and are still trying to mitigate the devastating effects of inflation.

The overall picture painted by Morning Consult’s latest economic intelligence is one of increasingly budget-conscious consumers who nevertheless continue to spend. Dwindling purchasing power appears to have coincided with more consumers financing purchases by dipping into savings or increasing debt burdens. In August, the net share of adults who said they had money left over after paying their monthly expenses fell to its lowest level since September 2020, while the share of consumers who reported an increase in credit card debt climbed to its highest level since October 2020.

Economic Intelligence
Consumers Are Saving Less and Adding to Debt

Household income continues to play an important role in shaping purchasing attitudes. Adults from households earning less than $50,000 annually were the first to react to escalating inflation, pulling back on spending as early as April. This group allocates a relatively larger share of wallet to gas and groceries, and thus more acutely felt the impact of price increases in the wake of the Ukraine invasion. More recently, as gas prices have fallen, this group has also disproportionately benefited from the cost relief, coinciding with higher spending and less trading down, although sticker shock has continued to dissuade some purchases for this group. 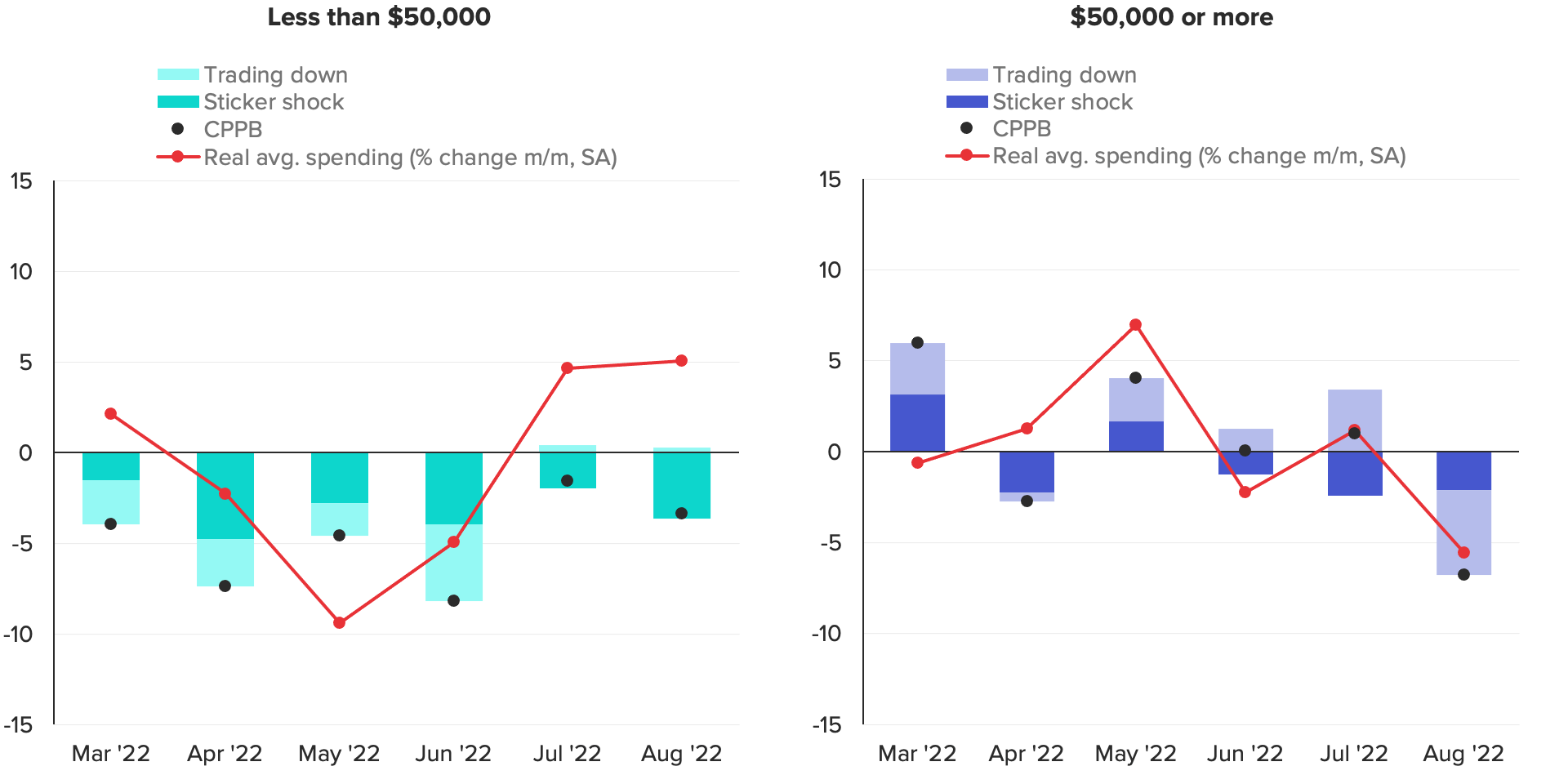 Source: Morning Consult Economic Intelligence. The CPPB is calculated by multiplying the Price Sensitivity Index values for each month by -1/3 and the Substitutability Index values by -2/3 and adding them together. Morning Consult’s spending data is adjusted for inflation by multiplying each income group’s spending allocation per category by the corresponding CPI for that category from the BLS, then summing the results across all spending categories tracked. Seasonal adjustments are based on seasonal factors from the Census Bureau.

Higher earners, meanwhile, took longer to react to inflation. Those earning at least $50,000 tend to have more robust savings, with Morning Consult’s household finances survey showing that on average over the past year, 71% of this group was able to add to savings each month, compared with only 43% of lower earners. The extended duration of elevated inflation, however, appears to be eroding that savings buffer, with real spending growth among those earning $50,000 or more per year decelerating in recent months.

In August, the CPPB for those earning at least $50,000 fell to its lowest level to date. Most of the decline in the CPPB for this demographic was driven by a notable increase in trading down activity, which helps to explain why the decline in their spending was comparatively modest: Rather than opting out of purchases altogether, higher earners in August simply selected cheaper alternatives, resulting in partial savings as opposed to the total loss of spending from unfulfilled purchases that tends to be more prevalent among lower earners.

Where to from here?

The slower spending growth that we predicted in our previous memo seems to have arrived, but some encouraging signs remain. For instance, consumers are returning to more normal spending patterns as pandemic effects fade. Public transportation and education spending were both up in August compared with a year ago as more workers and students returned to offices and schools. While inflation is likely to remain a headwind as long as it stays elevated, the U.S. consumer continues to show surprising resilience. Our full U.S. Consumer Spending & Inflation report, set to be released later this month, will dive deeper into these trends at the category level, analyzing their implications for retail sales and PCE growth.