Most Voters Expected Trump’s Business Ties to Impact How He Governs. But More Now Say That’s a Bad Thing. 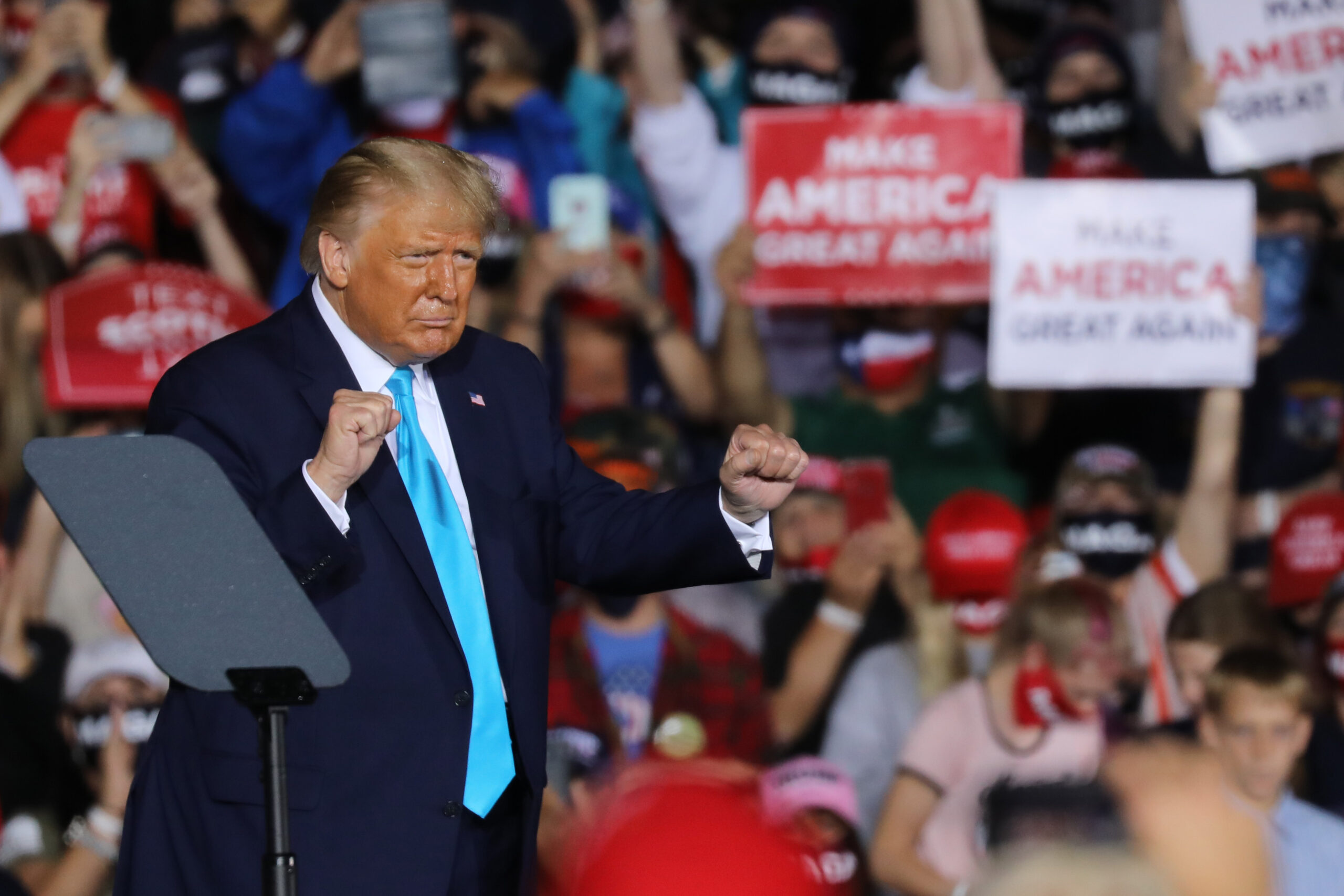 President Donald Trump speaks at a rally at Harrisburg International Airport on Sept. 26, 2020 in Middletown, Pa. New polling shows 4 in 5 voters believe that Trump's businesses have impacted his presidential decision-making -- and half of voters think that's a bad thing. (Spencer Platt/Getty Images)
By Eli Yokley

At the end of 2016, voters were nearly unanimous in their belief that Donald Trump’s business entanglements would affect his decision-making when he took office as president, according to Morning Consult polling at the time. Nearly four years later, a similar share says those business stakes have had an impact on his governing — and voters are now more likely to characterize that as a bad thing.

A new Morning Consult survey found 80 percent of voters say Trump’s business interests and positions have had at least some impact on the decisions he’s made in the Oval Office, similar to findings from a December 2016 poll. But since then, the share who call it a good thing has fallen 8 percentage points, to 31 percent, while the share who viewed the influence as negative rose 6 points, to 50 percent. 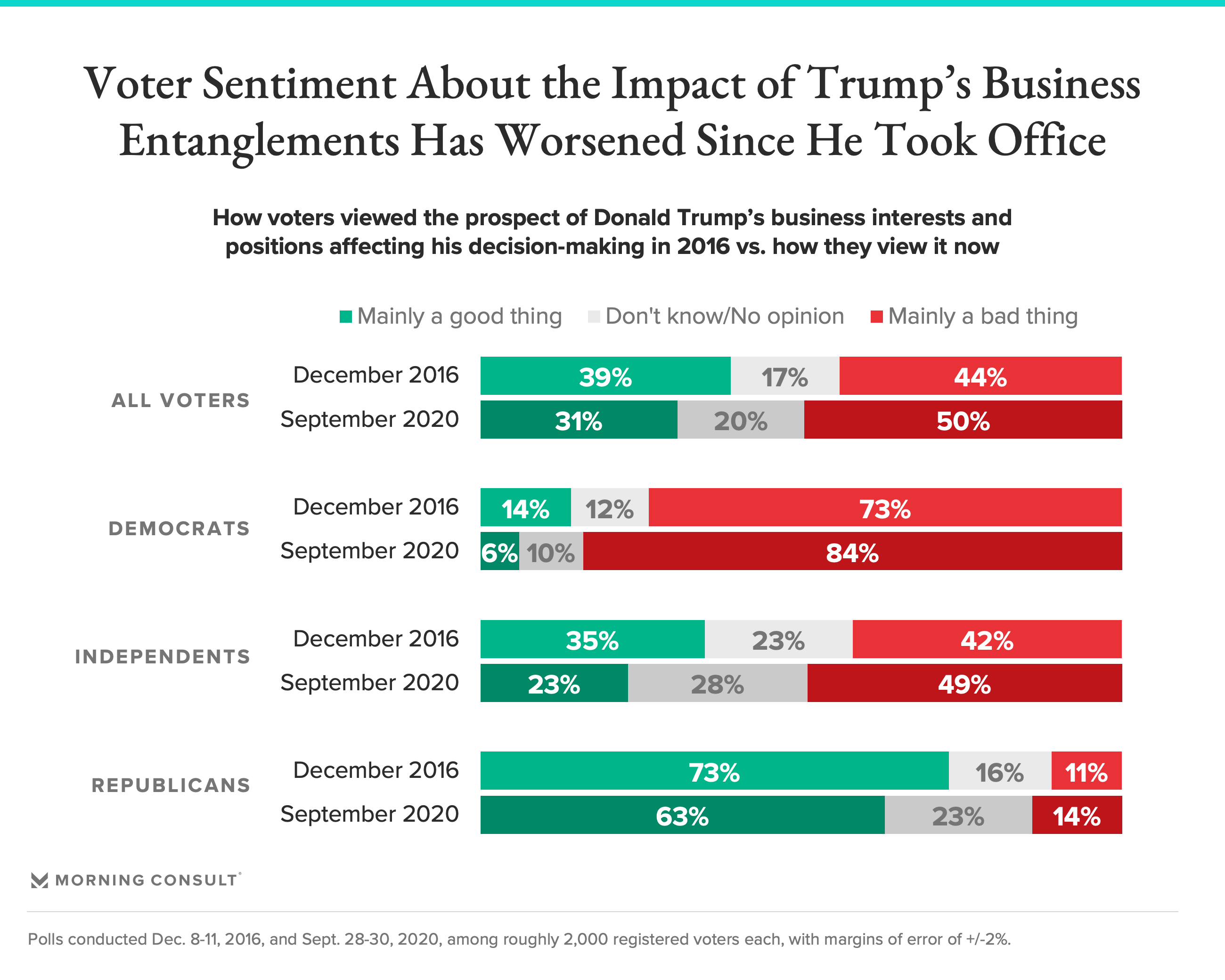 The latest poll was conducted Sept. 28-30, after critical revelations from The New York Times about the president’s tax returns — which he has fought in Congress and in court to keep secret from voters — brought Trump’s personal finances back into the spotlight. The reporting found Trump did not pay federal income taxes in 10 of the past 15 years because of massive business losses, that he ran for office to revive his personal brand and that he is facing a deadline of the next few years to pay back millions of dollars in loans, a position that critics say could leave him vulnerable to outside influence.

The biggest issue for voters, according to the poll, is the notion that he misled the public about his financial record — a decades-long campaign that started with the premiere of NBC’s “The Apprentice,” a reality show in which Trump starred as a successful businessman. 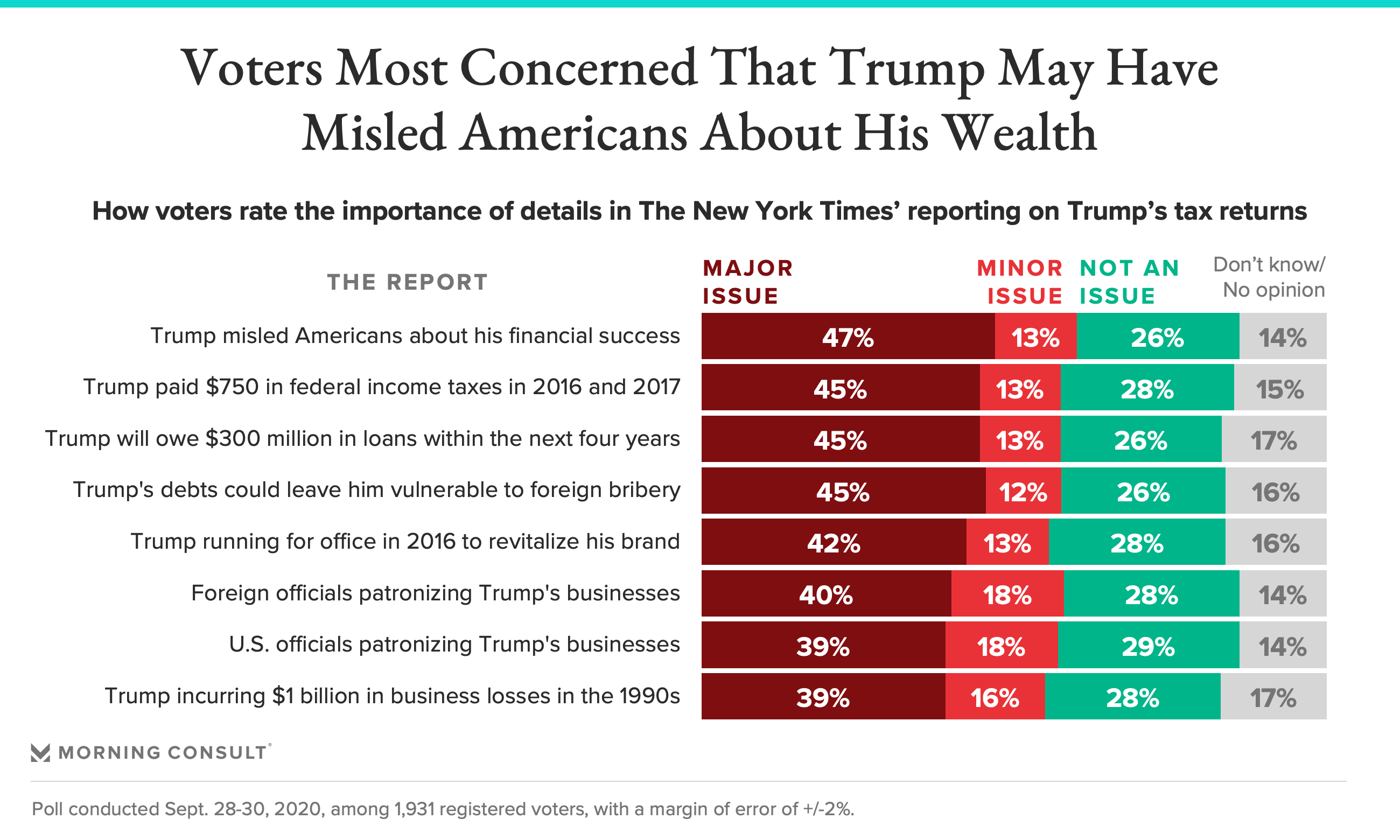 Six in 10 voters said the deception was at least a “minor” issue for them, while slightly smaller shares said the same about the loans coming due, the potential for foreign influence and the reporting that showed Trump paid only $750 in federal income taxes in 2016 and 2017 — less than the average taxpayer.

Trump’s loans and potential vulnerability to foreign bribery were at least minor issues for 56 percent of independent voters, while nearly half of Republican voters said the issues were not a concern at all.

Related: Trump Should Commit Now to a Peaceful Transfer of Power, Most Voters Say

It is unclear how or if the tax story will have a major impact on Trump’s race against Democratic nominee Joe Biden, who is leading nationally and in key states, according to Morning Consult Political Intelligence. But it does have the potential to tarnish his image as a business mogul, as other research has shown possible.

The survey asked voters if they’d rate Trump as successful, asking the question both before and after providing information about The New York Times report. Once voters learned about the news, the share who said he was successful dropped 10 points, to 44 percent, and the share who rated him as unsuccessful increased 3 points, to 46 percent. 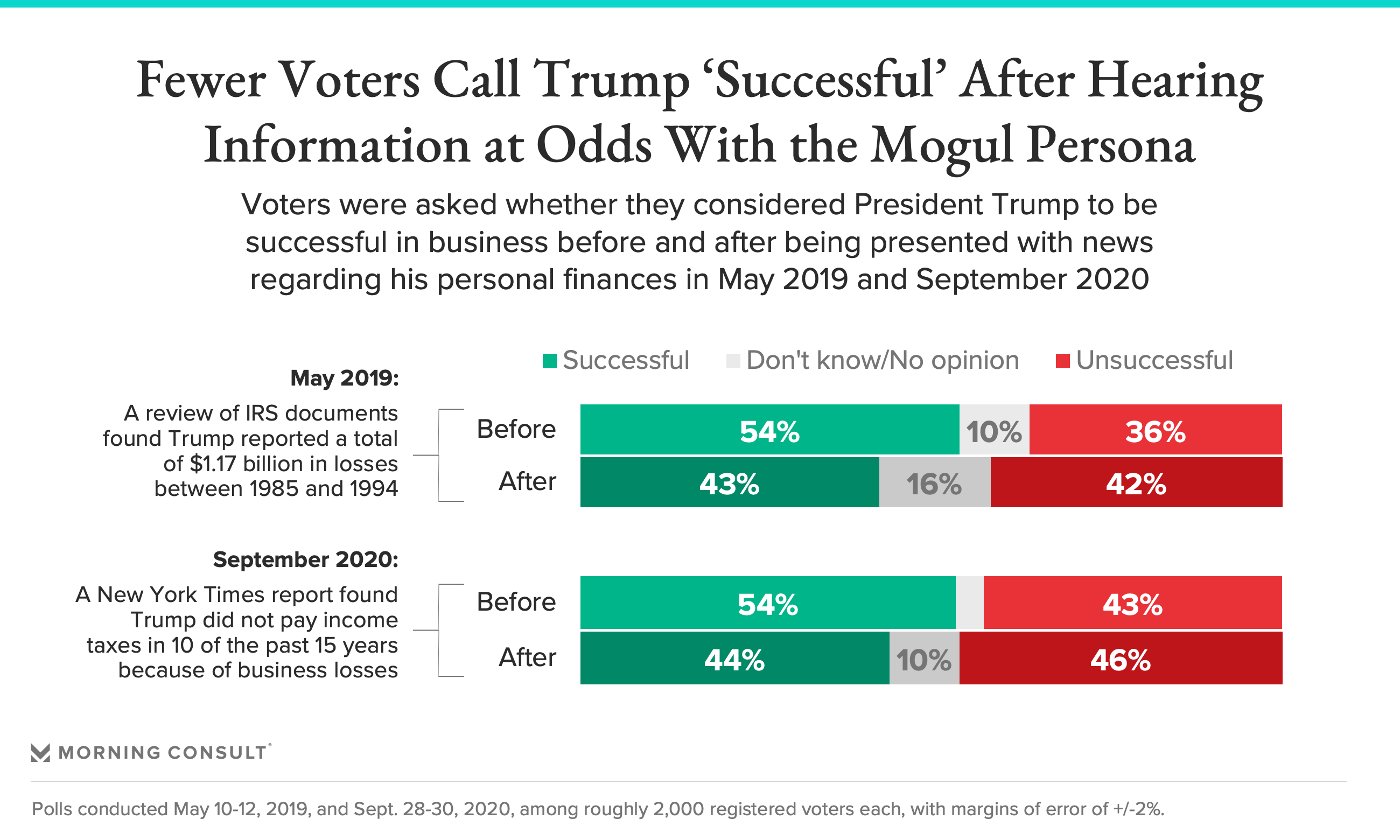 Morning Consult ran a similar test in May 2019 after news broke that Trump reported $1.17 billion in losses between 1985 and 1994. It found similar movement in the share who called Trump successful, but a larger change in the share who rated him unsuccessful. Between the two surveys, the share of voters who said Trump was successful recovered to its initial May rating, raising questions about the lasting power of the critiques on his finances — but some damage was done: The share who called him unsuccessful went unmoved in 16 months.

The most recent New York Times story had received 4.6 million impressions online by the day the poll started fielding, according to data from NewsWhip obtained by Axios. But it may have been less salient news to the electorate: 37 percent of voters — including half of Democrats and 3 in 10 independents and Republicans — said they’d seen, read or heard “a lot” about it, though another 37 percent also reported hearing “some.”

The issue came up briefly in the first presidential debate on Tuesday, when Trump denied the report and claimed without evidence to have paid millions of dollars in taxes in one year. Four years before, Democrat Hillary Clinton had raised her own concerns about Trump’s taxes, prompting Trump to say he was “smart” for not paying them, a line of defense that his allies have tapped into in recent days in their response to the story.

The latest survey found 41 percent of voters said that Trump didn’t pay income taxes because “he is a smart businessman and knows how to move his money around,” compared with 36 percent who said he did not pay “because his business ventures are usually unsuccessful.” Responses largely broke along partisan lines, with 59 percent of Democrats siding with the former sentiment and 58 percent of GOP voters going with the latter.

Correction: A previous version of a chart in this story misstated responses from independent voters.