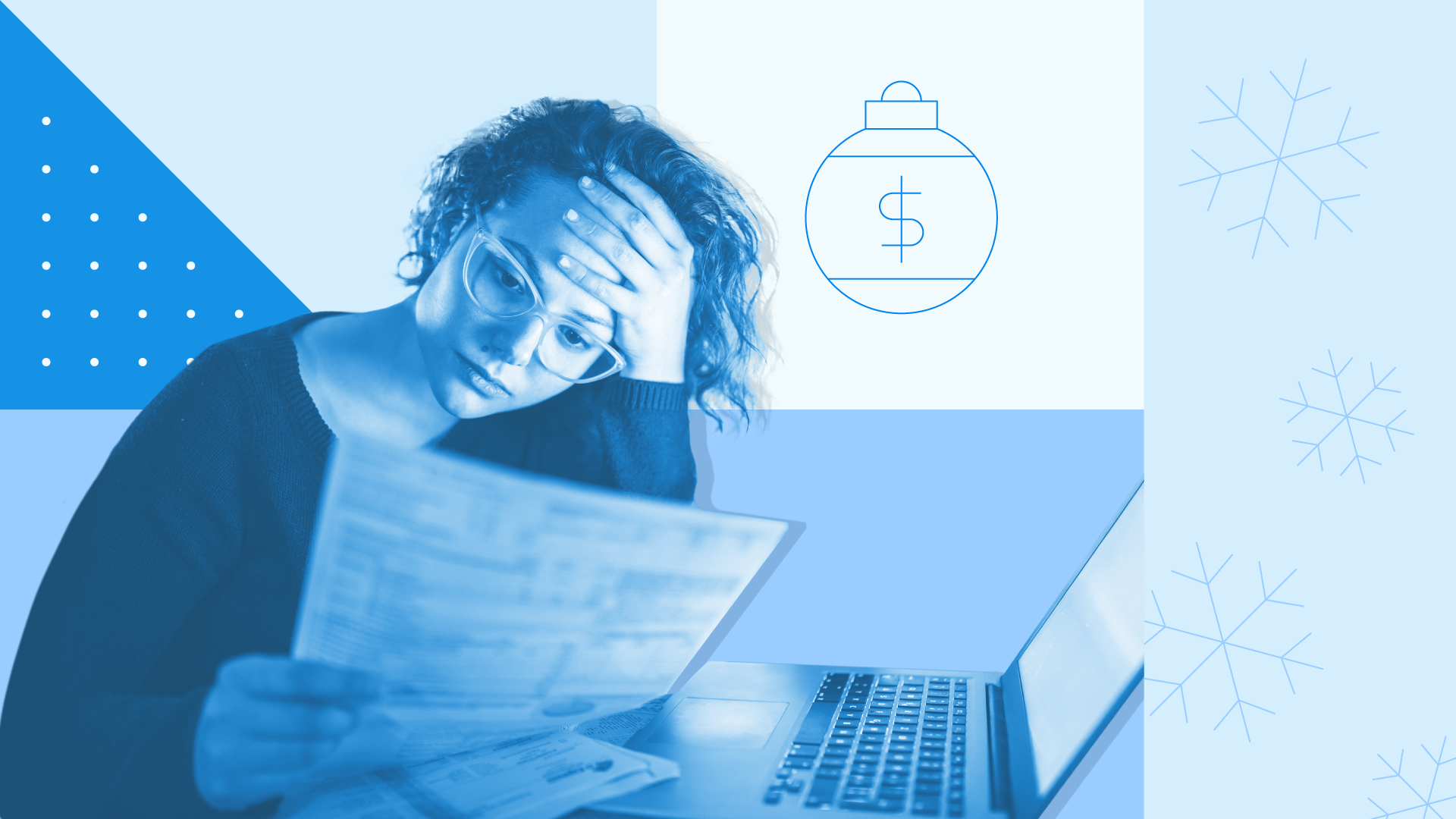 Despite being just as likely to budget as men, holiday financial stress is especially pronounced in women, who throughout the year report lower financial well-being as well. Although fintechs frequently position themselves as bridges capable of closing the financial inclusion gender gap, adoption rates among women still lag behind, indicating that leaders have work to do in serving half the population.

’Tis the season for financial stress, especially if you’re a woman. An analysis of Morning Consult research around holiday-related stress highlights two distinct gender gaps: the financial well-being gap and the fintech inclusion gap, both of which dampen enjoyment of and spending during the holiday season.

Not only are women more likely to be worried about their holiday finances this season, but they are also more likely to think of the holidays as the most financially stressful time of year. As a result, more women than men plan to lower their gift spending this year, by a margin of 14 percentage points. 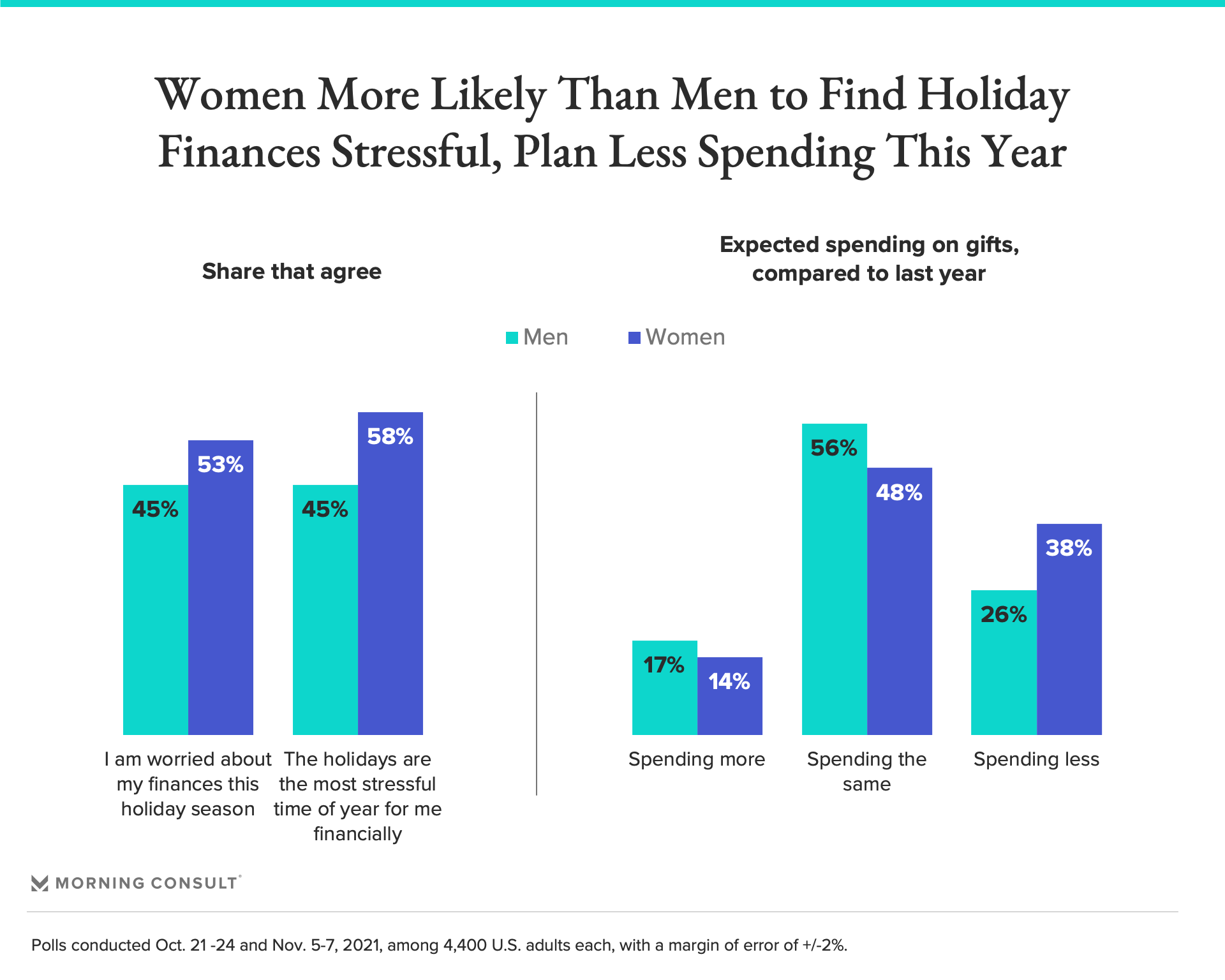 Moreover, women are more likely to feel pressure to buy gifts for others during the holidays (56 percent of women versus 48 percent of men).

The holidays represent a period of acute stress for women, set against a backdrop of women reporting consistently lower financial well-being compared with men, according to Morning Consult’s Financial Well-Being Scale.

The Financial Well-Being score is a reflection of respondents’ sense of security and freedom of choice, and women appear to be struggling with the former. They are less likely to report being able to handle an unexpected expense or having money left over at the end of the month, and are more likely to feel concerned that their saved money won’t last.

Women’s lower financial well-being can be attributed to a host of social and cultural factors, including the relatively short amount of time that women have had control over their own money: Not until the 1960s could women in the U.S. open their own bank accounts. With fewer generations of participation in the financial system, women are understandably less confident in the male-dominated sphere, having lower financial literacy and being less confident managing finances — particularly when it comes to investing.

Enter fintech. Over the past 20 years, the democratization of finance through digital tools for budgeting, saving and investing, accessible to all through mobile phones, has promised to lift the financial well-being of traditionally underserved groups by helping them help themselves.

But it isn’t a lack of planning or ignorance of budgeting that is causing women to feel anxious about holiday finances or their financial futures in general. On the contrary, women are as likely as men to budget year-round, including for the holidays. How women budget illuminates the irony of fintech’s promise: The technology meant to increase inclusion is instead perpetuating the gender divide.

Share who use each of the following to budget

Among U.S. adults who budget, men are more likely to use technology — in the form of budgeting tools, mobile apps or spreadsheets — than women, who primarily keep track of their spending using pen and paper. This means that, amid a fintech boom, men have become better at managing their finances and improving their financial well-being, but women have again been left behind.

A look at the user base of fintechs and traditional financial institutions covered by Morning Consult Brand Intelligence, our flagship brand-tracking platform that surveys consumers around the world on thousands of brands and products every day, confirms this gender gap and illustrates that fintechs face a steeper uphill battle in closing it than traditional financial institutions.

Women are roughly half as likely as men to use financial management apps such as Mint, Acorns and Robinhood. The gap is less pronounced among users of large traditional providers such as Bank of America.

The fintech inclusion gap is widely acknowledged and thoroughly researched, but the root cause of women’s lower adoption of fintech relative to men remains frustratingly out of reach.

The price of services may be a factor for some women, but more likely it is women’s reluctance to share financial data. Women report lower willingness to share their financial data in return for more personalized services, despite reportedly trusting financial services institutions about as much as men.

Before 2022 strategic road maps are finalized, leaders in both fintech and traditional financial institutions should augment their plans by recognizing the untapped market opportunity that women represent for their individual brands, and propose measures to serve them better and more responsibly.