Inside the Secret Effort to Overhaul Democrats’ Message 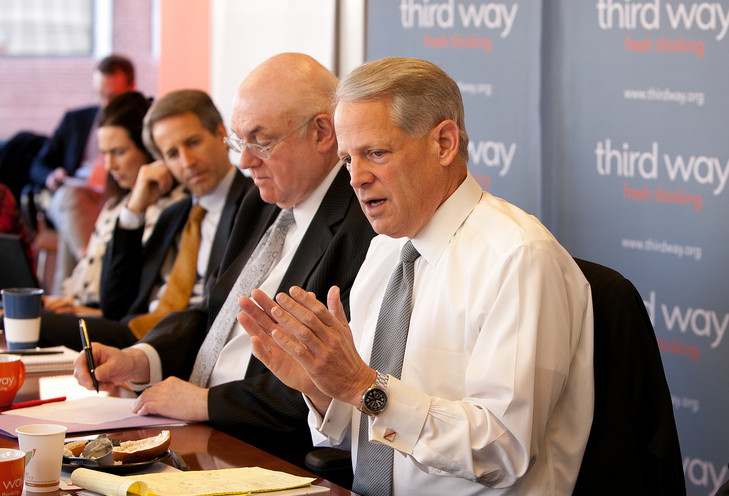 In the months since their party took another electoral beating and lost the Senate to Republicans, senior Democratic strategists have launched a major effort to rebrand the party, after concluding their message no longer inspires voters who turned out to elect President Obama but sat on their hands during midterm elections.

The rebranding project is being led by Rep. Steve Israel (D-N.Y.), chairman of the House Democratic Policy and Communications Committee, with help from Jefrey Pollock, one of the party’s most trusted pollsters. Their goal, several people involved in the effort say, is to make it clear that Democrats understand voters still have a deep well of anxiety about their economic safety, years after the end of the great recession.

“This anxiety that voters are having is really unprecedented. It is unprecedented and it is deep and it is a trauma,” Israel said in an interview in his House office last week. “They see the economy changing in front of their very eyes, like never before. It’s a fundamental and profound shift in their economic terrain. And that uncertainty requires a party that talks about tools that will help them get ahead and stay ahead.”

On Wednesday, Israel will convene the 16 members of the DPCC to begin considering the outlines of a message Democrats plan to roll out this summer. Before then, House Democrats will preview their talking points among left-leaning pundits next month to solicit input. Then members will road-test their new messaging in town hall meetings and local media appearances when Congress breaks for its August recess.

Channeling Obama’s Democratic predecessor, Israel said the goal is to convince voters that the party feels their pain.

“You need a Bill Clinton message that embraces the anxiety voters have, and one that is forward-looking,” Israel said.

Wednesday’s meeting comes a few months after a group of polling and communications experts briefed House Democrats at a retreat in April. At that meeting, Pollock, along with strategists Anita Dunn, Doug Thornell, John Lapp and Jim Kessler told members they need to convey that they understand voters who believe they are recovering from the recession, but fear they could fall behind once more.

“People know that things, economically, have gotten better. And yet that hasn’t translated,” Pollock said in an interview Tuesday. “In the Clinton days, things got better and people were feeling good. That hasn’t happened here because of this anxiety. [Voters] are unwilling to say, or unwilling to believe, this is a permanent” recovery.

Democrats believe their message in 2014–which cobbled together issues that poll well with base voters, like an increase in the minimum wage and extending unemployment insurance–missed the mark with middle class voters, who didn’t believe those issues directly helped them.

“Democrats focused on a few specific popular policies but failed to weave them together in way that created a compelling narrative about the party. Their elevator pitch to the American people was scatter shot,” said Thornell, a veteran House Democratic aide who is now managing director at SKDKnickerbocker.

What’s more, while most voters think the economy is headed in a better direction, they still believe one bad break could send them sliding backwards once again. Democrats say they will re-engineer their message to acknowledge that anxiety within the middle class, and voters’ hunger for a party that helps them get ahead and stay ahead.

“The minimum wage is a good message for the base, and certainly one that can be inspiring to the base from a turnout perspective,” Pollock said. “Whereas a middle class squeeze [message] goes right to the heart of swing voters.”

The party’s front-running presidential candidate, Hillary Clinton, struck what will become a recurring theme in her first major campaign rally on Saturday: “I believe that success isn’t measured by how much the wealthiest Americans have, but by … how many families get ahead and stay ahead,” she said.

Clinton’s Saturday speech also previewed the way Democrats will frame their efforts to reform Washington and government, the fourth of four fights she laid out as a rationale for her campaign. Democrats will portray themselves as outsiders, given Republican control of the House and Senate — and despite Obama’s two terms in the White House.

The two messages — getting ahead and staying ahead, in addition to a broken Washington — get to a deeper fear gnawing at voters: That Washington is to blame for their tenuous grasp on recovery.

“Voters blame Washington for the lack of economic stability. They’ll say, ‘Yeah, the economy’s getting better, but I’m concerned that I can slip back, and that’s Washington’s fault,'” Israel said.

That Clinton and House Democrats find themselves on the same page is no accident: The Clinton campaign came to many of the same conclusions Israel’s team did, through its own paid research. Senate Democrats and Democratic governors are likely to sing from the same hymnal, party strategists said.

Republicans came to similar conclusions after Mitt Romney lost to President Obama in 2012. In a report commissioned by the Republican National Committee in 2013, party leaders concluded they had alienated too many voters.

“Young voters are increasingly rolling their eyes at what the Party represents, and many minorities wrongly think that Republicans do not like them or want them in the country. When someone rolls their eyes at us, they are not likely to open their ears to us,” the report’s authors wrote. “The perception, revealed in polling, that the GOP does not care about people is doing great harm to the Party and its candidates on the federal level, especially in presidential years.”

While Republicans acknowledge they face problems in presidential election years, Democrats have difficulty winning in lower turnout midterm election years. And the legacy of one particular midterm, 2010, looms large over the party’s quest to reclaim control of Congress. That year, Republicans captured a staggering 700 Democratic-held seats in state legislatures, wins perfectly timed to take advantage of the decennial redistricting process.

Senior Democratic strategists acknowledge they erred in 2008, when they focused on winning seats in Congress more than on state legislatures and governors, which exacerbated Republican wins in 2010. Democrats say they must play a bigger role in redistricting in key states — either by winning governorships or clawing back to majorities in state legislatures — if they are to have any hope of reclaiming control of Congress over the long term.