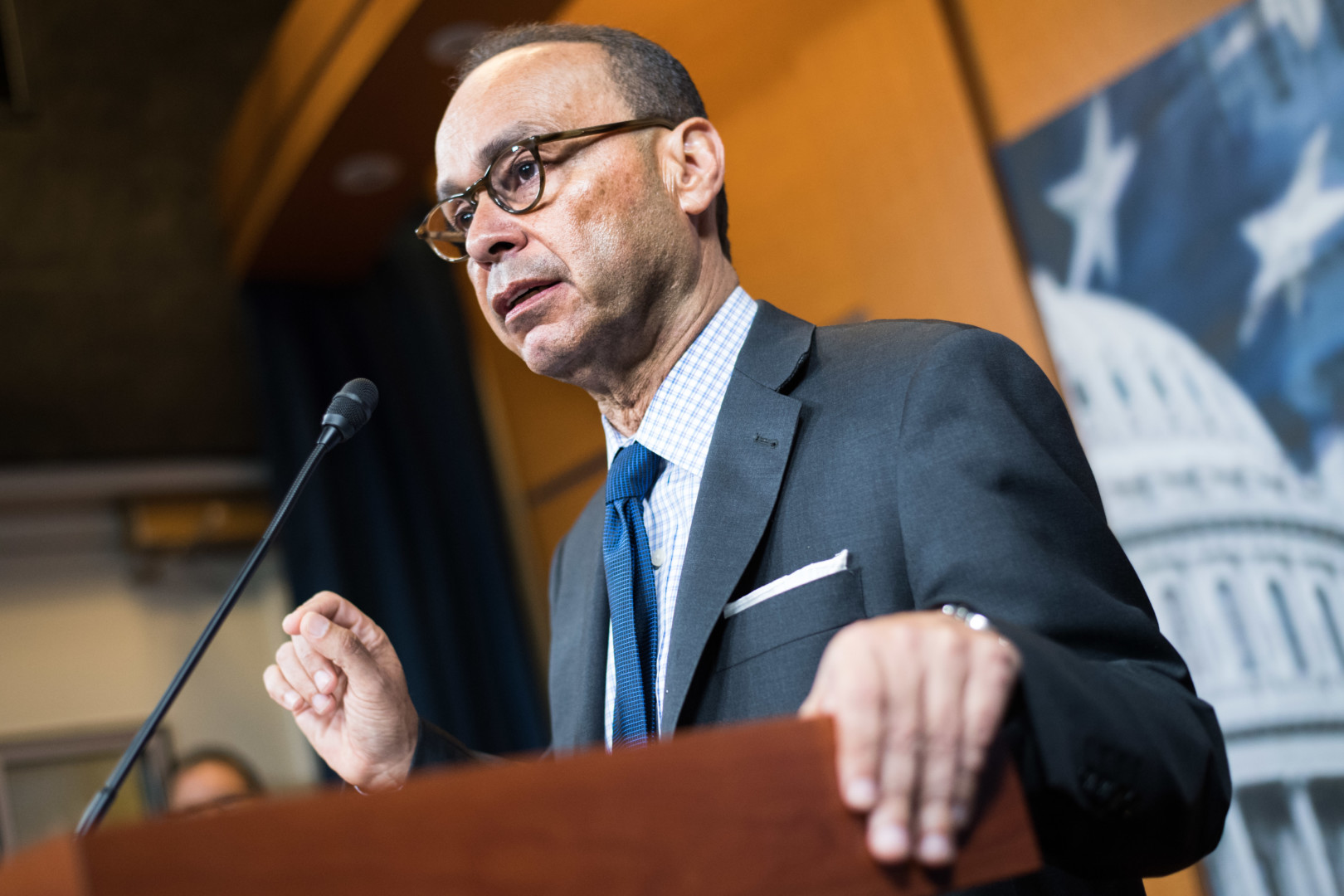 Gutiérrez is laying the groundwork for an immigration bill. (Rob Kunzig/Morning Consult)
By Jon Reid

Two influential House Democrats are planning another shot at immigration reform next year, regardless of who controls the House.

Veteran Reps. Luis Gutiérrez (D-Ill.) and Zoe Lofgren (D-Calif.) have already held “preliminary discussions” about crafting draft legislation after the election, which they hope will serve as the starting point for a bipartisan overhaul of immigration laws in 2017, according to a senior Democratic aide.

While immigration reform proved too difficult to accomplish under the Obama administration, Gutiérrez thinks it is doable in the next Congress, particularly if GOP presidential nominee Donald Trump does poorly with minorities. Trump’s anti-immigrant rhetoric has Gutiérrez convinced that Hispanics will vote in record numbers this November. If he’s right, Republicans will again be thrust into a discussion about expanding their base. Gutiérrez thinks the election could be a watershed moment if his prediction holds true.

“There are Republican women and men who want to get this done,” the Illinois Democrat said Tuesday in a phone interview. “They’re going to have the ability to turn around to their caucus and to say, ‘How much longer do we want to just push away, push aside a growing immigrant Latino community in the United States?”’

The policy details of the proposal, such as a pathway to legalization for millions of undocumented workers and securing the border, will have to be ironed out after the players know the results of the election.

But there are at least a couple ways to kick off the debate right now. One approach, the Democratic aide said, is to present Republicans with “progressive” immigration reforms under the premise that the bill will shift to the center once both parties are at the negotiating table. Another possibility is to “start from the sensible center” and invite Republicans to negotiate almost immediately, with the goal of keeping them at the table throughout the process.

What has been established is that an immigration overhaul will have to be bipartisan. Gutiérrez also made it clear that his push is not connected to Hillary Clinton, who has pledged that, if elected, she will introduce immigration reform legislation with a pathway to citizenship within the first 100 days of her presidency.

Convincing Republicans to give immigration reform another shot, after eight years of toxic relations they’ve had with the Obama administration, could be tricky. Pro-immigration Republicans have questioned why President Obama didn’t push harder for the cause when Democrats controlled Congress from 2009 to 2011.

Instead, the administration pressed for immigration reform in Obama’s second term, after Republicans gained control of the House. The White House pushed the House to adopt a Senate-passed bill, which many Republicans opposed.

A bipartisan House coalition that included Gutiérrez, Lofgren and leading Republican proponents, were at work on their own House bill. But the administration, some members of the group say, was unwilling to engage with them. That bill was on the verge of a vote in the House in summer 2014, but was ditched at the last minute when former House Majority Leader Eric Cantor (R-Va.) lost his re-election bid to Rep. Dave Brat (R-Va.). Brat accused Cantor of supporting “amnesty,” and in the immediate aftermath of the surprise defeat, many House Republicans who had privately signed onto the bill withdrew their support.

One Republican from that coalition is concerned that Clinton’s relations with Congress will be no better than Obama’s.

“When he [Obama] could have done it, he didn’t want to do it. When he wanted to do it, then it was too late to get it done,” Rep. Mario Díaz-Balart, who has led Republican efforts on immigration reform, said Wednesday in a phone interview. “What I think happened to Obama is he just wanted to play politics with it. I’m fearful that Hillary will do the same thing. But maybe not.”

Still, the Florida Republican said immigration reform is definitely “doable” in the next Congress if both sides are willing to negotiate in good faith. “It is politically difficult and it is technically complex, however I think it’s doable. And again, the issue is not going to go away,” he said.

Díaz-Balart added that much of the policy grunt work has already been completed in previous years. “We’ve done so much work that a lot of us would be ready to move forward as soon as that window of opportunity opens up.”

Díaz-Balart also didn’t rule out Trump embracing immigration reform if he is elected president. If Trump wants his border wall, Díaz-Balart reasoned, overhauling immigration laws will have to be involved too. “Remember the old saying only Nixon can go to China?”

If bipartisan immigration reform is going to happen under a Clinton presidency, expect Gutiérrez, who is widely respected by Republicans on the issue, to be a key player as he was in 2014.

“He [Gutiérrez] has a very good understanding because he and I have been dealing with this for a long time, what the general parameters are for this thing to actually pass,” Díaz-Balart said. “The question is, ‘Would Hillary Clinton listen any more than the Obama administration listened?’ Which obviously they did not.”

In the unlikely event of Democrats taking control of both chambers of Congress and the presidency, Gutiérrez said he plans to approach Clinton’s transition team to lay out the complex politics surrounding immigration.

“She [Lofgren] and I are meeting with diverse groups, stakeholders on immigration and using our past experience to craft and carve a proposal for consideration by the transition team,” Gutiérrez said. “We’re going to do it. We’re going to present it to them, and we’re going to say, ‘Here’s a model for moving forward.’”

Under this scenario, Díaz-Balart believes Democrats would have no excuse not to pass immigration reform because they put it off when they had the majority before.