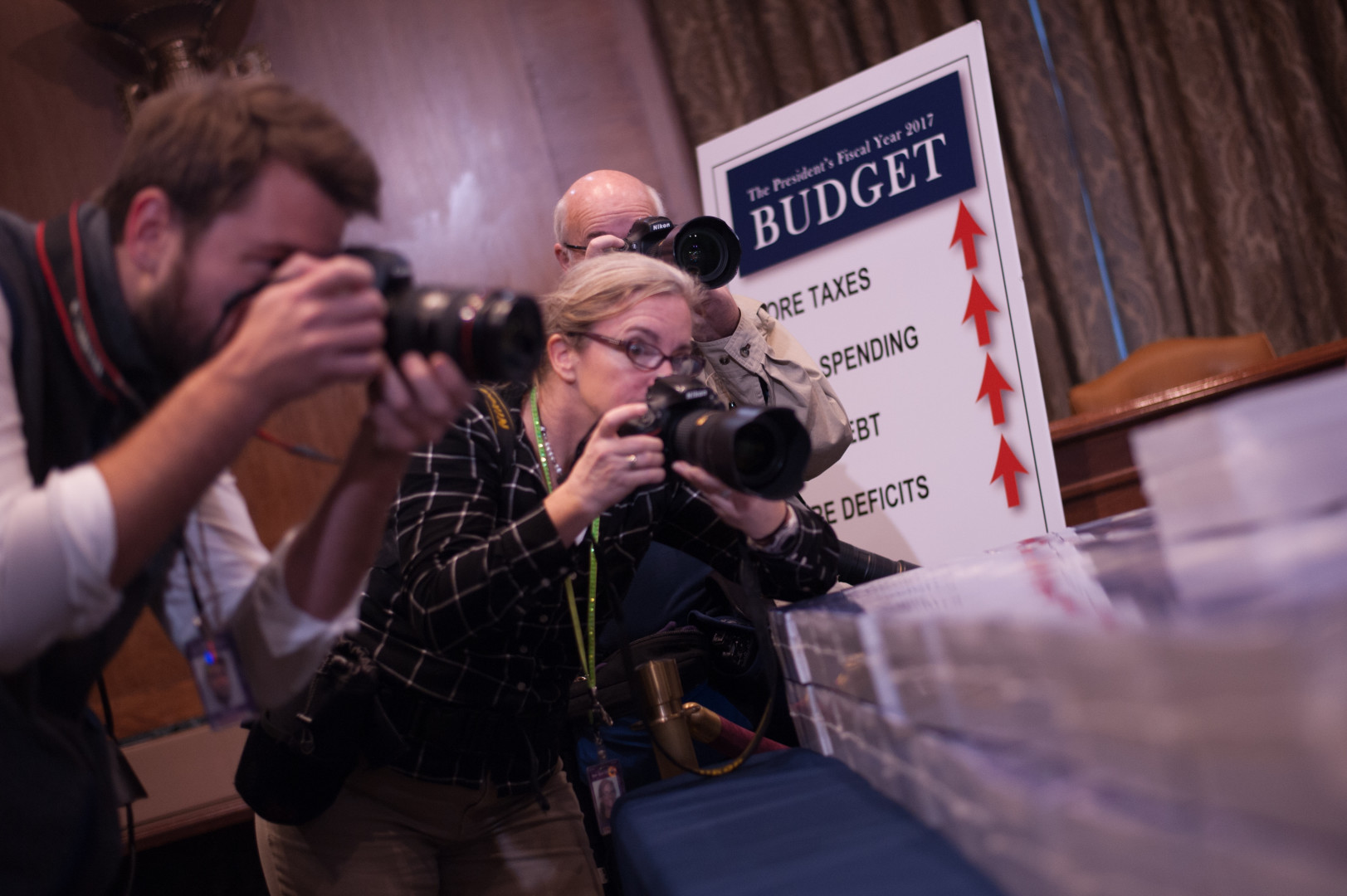 For media, the release of the president's budget is an annual holiday. (Rob Kunzig/Morning Consult)
By

President Obama sent a $4.1 trillion budget proposal to Congress Tuesday that looks beyond his final year in office to sketch out a vision for progressive governance. The issues he lays out are intended to influence the upcoming presidential election and continue his own legacy-defining project that started last month with the State of the Union address.

Contained within the president’s budget plan are a handful of bipartisan proposals that could become law before Obama’s successor takes over, such as $1 billion investments in cancer research, prescription drug abuse, and heroin-use treatment. The spending blueprint proposes a hefty $19 billion investment in federal cybersecurity infrastructure, an area where both parties agree the government needs to improve its capabilities.

But the most ambitious parts of the president’s budget agenda will be rejected out of hand by a hostile Republican Congress. Topping the list is a proposal to impose a $10.25 fee on barrels of oil in order to fund a slew of clean transportation initiatives. Congressional Republicans wholeheartedly lambasted the plan, which even Democrats on Capitol Hill have hardly embraced, saying costs would simply be passed on to the American consumer.

“This isn’t even a budget so much as it is a progressive manual for growing the federal government at the expense of hardworking Americans,” House Speaker Paul Ryan (R-Wis.) said Tuesday. “The president’s oil tax alone would raise the average cost of gasoline by 24 cents per gallon, while hurting jobs and a major sector of our economy. Americans deserve better.”

Like many of the high-profile proposals in the White House budget, the oil fee is not something the president’s team expects to gain traction on this year. It’s instead a bid to set the course for where Democrats will take the party’s platform in the future.

“While it is important to take stock of our progress, this Budget is not about looking back at the road we have traveled. It is about looking forward,” Obama wrote in a message Tuesday. “It is about answering the big questions that will define America and the world in the 21st Century.”

“The architecture of this budget is designed to preserve and promote accomplishments that the administration achieved over seven years, most notably the Affordable Care Act,” he said. He noted there were portions of President Clinton’s final budget that ended up in Obama’s first fiscal blueprint. “You can’t write these things off.”

Other proposals are similarly liable to receive little attention from congressional Republicans but may well become Democratic staples in the November elections. They include a new unemployment insurance plan that would cover half of a worker’s lost earnings up to $10,000 for those making under $50,000 a year. As in previous years, Obama also proposes providing two years of tuition-free community college for students.

Still, even if the GOP-led Congress spends little energy considering a number of the administration’s budget proposals, Bernstein said they could become important points of leverage in the upcoming spending talks.

“There’ll be some appropriations ideas in this budget that will very likely influence the committees that appropriate funds for specific budget lines,” he said. “It doesn’t mean the White House is going to get $300 billion to invest in clean energy from a surcharge on oil, but they might get a few hundred million for a worker training or a Head Start program that wouldn’t otherwise end up there.”

Largely missing from the administration’s budget are novel attempts to address the main spending drivers of the nation’s debt, Social Security and Medicare.  The budget does include ideas in previous Obama budgets to curb Medicare spending.

Instead the budget addresses the debt problem by proposing to boost the revenue side of the balance sheet.

It purports to stabilize the national debt held at 75 percent of gross domestic product over the next 10 years. The administration says its budget would reduce deficits by $2.9 trillion in that 10-year window, welcome news for deficit hawks dismayed by the Congressional Budget Office’s latest outlook. However, the plan accomplishes much of this deficit reduction by assuming a range of new tax revenues that have no chance of becoming law with Republicans in control of Congress.

Maya MacGuineas, president of the Committee for a Responsible Federal Budget, applauds the president’s commitment to paying for his new initiatives, even offsetting costs from a tax-extender bill passed in December. But, she said he has “given up” on bringing down debt levels.

2:05 p.m. This story was updated to include responses from Bernstein and MacGuineas.