As Senate Republicans consider what to do with the Affordable Care Act’s expansion of Medicaid, a plurality of voters would like them to leave it alone.

Forty-six percent of voters said that any Obamacare replacement legislation should leave intact the expansion of Medicaid, a federal program for low-income Americans, according to a new Morning Consult/POLITICO survey. Eighteen percent of the electorate supports rolling back the expansion altogether, while 14 percent of voters back the plan passed by House Republicans to gradually phase out the expansion by forcing states to stop enrolling new people by 2020.

With health care in the headlines due to the GOP bill, dubbed the American Health Care Act, the issue has also overtaken security as the top issue for voters for a second week running, polling shows — its highest level since polls began three years ago.

Broken down by political affiliation, 63 percent of Democrats and 45 percent of independents said the expansion should be left in place. Republicans were divided on the issue, with 29 percent saying that any Obamacare replacement bill should repeal the expansion, while 26 percent favored leaving it alone. Twenty-one percent of GOP voters favor the House GOP’s plan to phase out the expansion gradually, and a quarter of Republicans said they had no opinion or didn’t know. 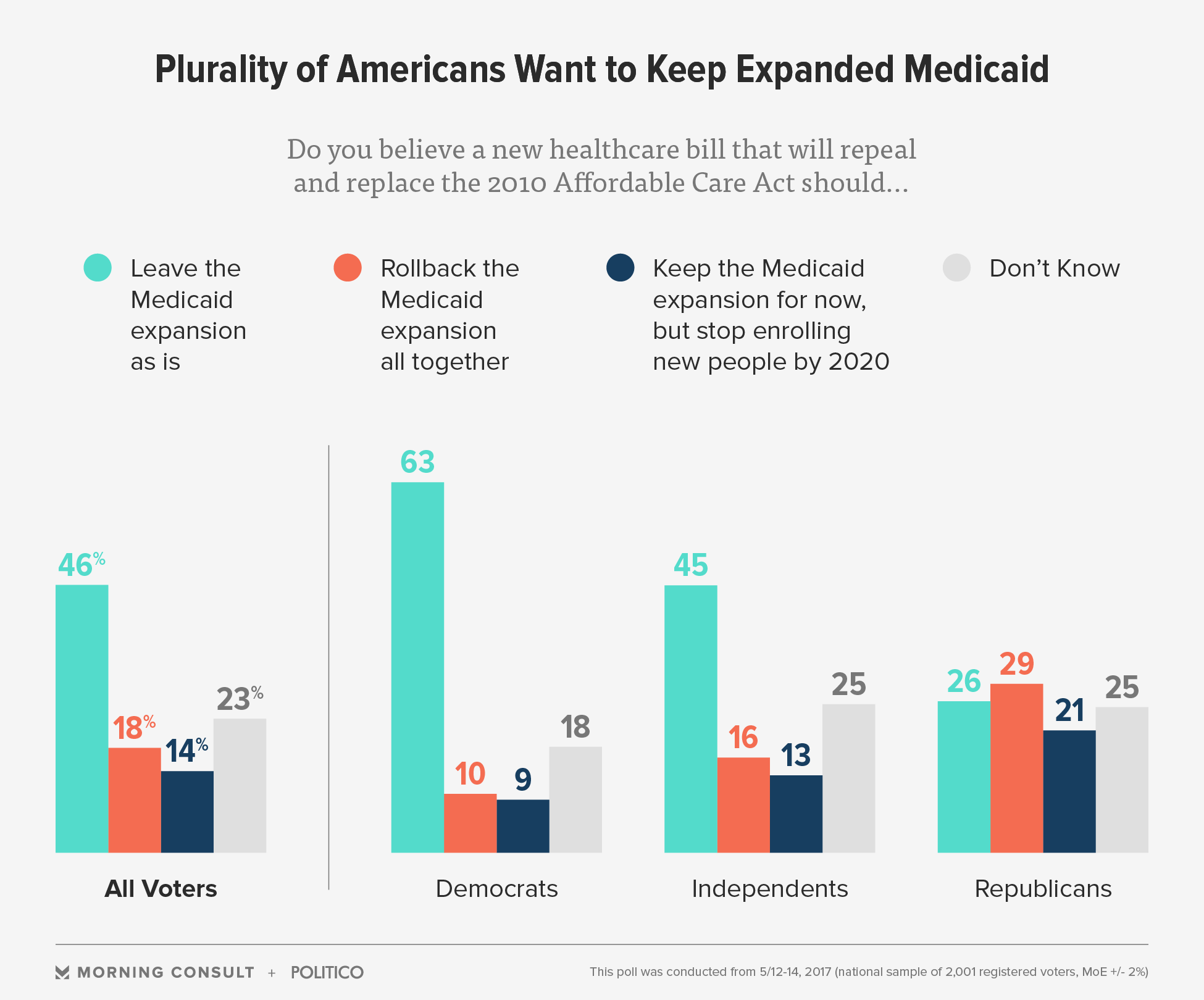 As a whole, 62 percent of voters back Obamacare’s Medicaid expansion, presenting Senate GOP leaders with a quandary as they try to reach a consensus in their conference on a health care bill. While conservative hardliners in the House wanted to take a more aggressive approach on rolling back Medicaid expansion, some Republican senators are wary of having millions of Medicaid beneficiaries lose their health coverage.

As of February, about 14.2 million people have gained Medicaid coverage in 26 expansion states that reported their total enrollment, and 20 GOP senators hail from expansion states.

Four out of five Democrats back the expansion, as do 61 percent of independents, while there is an even split among Republicans, with 43 percent supporting it and the same percentage opposing it.

Thirty-nine percent of voters said the legislation would let insurance companies reject coverage for people who would be considered uninsurable without Obamacare, while 30 percent said it would not, in line with figures last week. Thirty-one percent said they didn’t know or had no opinion.

In fact, the legislation maintains the guaranteed issue clause that requires insurers to offer coverage to Americans regardless of their health status. But it would let states opt out of a federal requirement that insurers not charge higher premiums for people with sick people as long as the state has established a risk-sharing mechanism, such as a high-risk pool.

Nearly half of Democrats (49 percent) and 40 percent of independents said the bill would let insurers discriminate against sick people. Among Republicans, 28 percent said that, while 39 percent said the bill would maintain protection for pre-existing conditions. Another 34 percent of Republicans didn’t know or had no opinion, the highest level among party affiliations.

Only 6 percent of voters want the Senate to pass the House bill in its current form. The approval rating of the bill remains mostly unchanged from last week, with 38 percent approving of it and 45 percent disapproving, up 1 percent from last week.

The national, online survey polled 2,001 registered voters from May 12-14 and has a margin of error of plus or minus 2 percentage points. See the full results here.