In a choice between the president of the United States and his second-in-command, more voters say Vice President Mike Pence should take charge of the country.

A Morning Consult/POLITICO poll conducted Aug. 17-19 found 34 percent of registered voters said they’d rather have Pence as president than Donald Trump, if they had to choose. Thirty percent of those surveyed backed Trump and 35 percent said they didn’t know or had no opinion, according to the national sample of 1,987 registered voters. 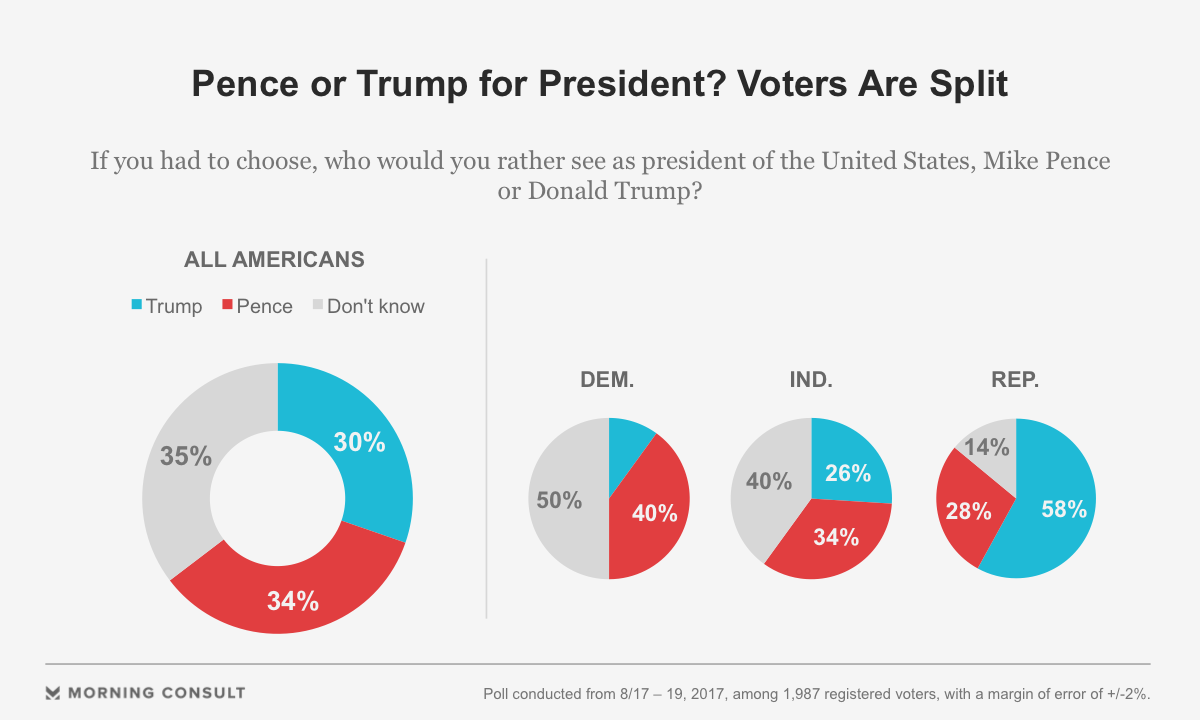 The poll, which has a margin of error of 2 percentage points, follows a dramatic week for Trump, who has faced criticism for his insistence there was blame on “both sides” of the Aug. 12 violent white supremacist rally and counter-protests in Charlottesville, Va.

Pence has stood behind Trump with op-eds and affirmation, even as other Republican leaders, CEOs and lawmakers distanced themselves from Trump’s comments.

“Bottom line for me is that I don’t think there’s much daylight between Mike Pence and President Trump,” said Bob Beauprez, a former Republican congressman from Colorado, in a Tuesday phone interview.

Voters might have slightly more confidence in Pence because he’s not the one in the spotlight, Beauprez said, noting that there were likely times voters favored former Vice President Joe Biden over former President Barack Obama.

Trump has support within his own party, with 58 percent of Republicans saying they would choose him as president, compared to 28 percent who said they’d rather have Pence. Among Democrats, 40 percent said they’d prefer Pence, and 10 percent said Trump.

“Some of it, I think, is optics,” Rozell said in a phone interview. “Pence — agree with him or not on policy — has an extremely different style, which comes off in a low-key, soothing manner. He can mask some very harsh views with very gentle and sensible presentation.”

Rozell said he can’t think of an administration in recent history where the question of higher confidence in the vice president to lead has been seriously considered. Consistent leaks from the White House, inquiries into Trump’s conflicts of interest and the Department of Justice investigation into Russian meddling in the 2016 election have put Pence on voters’ radars.

“Many Americans, guided by much of the commentary about this president, are possibly thinking beyond Donald Trump,” he said. “There is a sentiment out there that he may not survive four years in office. People are starting to look at Pence and say, ‘This guy might be president.’”

A more visible role for Pence could be advantageous for the administration, Rozell said. Presidential approval ratings ultimately translate to support in Congress for ideas, another arena in which Trump is taking heat. Trump and GOP members of Congress have so far failed to achieve a full repeal and replace of the Affordable Care Act and have made little progress on Trump’s campaign promises to overhaul the tax code and invest in infrastructure.

With 2018 midterm elections approaching, members of Congress will eventually have to decide whether or not to distance themselves from a president and his agenda to placate constituents who are unhappy with the administration.

“If Trump’s ratings continue to go down into the low 30s — at that point he’s an albatross around their necks,” Bruce Bartlett, who held senior policy roles in the Ronald Reagan and George H.W. Bush administrations and is now often critical of the GOP, said in a phone interview Tuesday.

Bartlett said he thinks the majority of establishment Republicans would be much happier with Mike Pence as president, but getting there is “basically impossible” at this point.

“One can imagine scenarios in which Trump resigns, walks away,” Bartlett said. “I still think the 25th Amendment is not completely kooky, but I don’t think impeachment is a viable option.”

The 25th Amendment lays out rules for potentially removing the president from office if he is unable to discharge his responsibilities.

Regardless of what’s to come from the investigations, don’t expect Pence to go rogue anytime soon, Bartlett said.

“He’s in a hopeless situation. He doesn’t dare allow the speculation of there being any space between he and Trump,” Bartlett said. “He’s fortunate he’s not on the front lines. He can just stay in the background because that’s what vice presidents do.”

Correction: A previous version of this story included a chart that misrepresented voter support for Pence and Trump. That chart was removed from the story.