Americans Are Skeptical of Muslim, Atheist Candidates, but That Could Change

When it comes to questions of faith and religious affiliation for candidates running for elected office, a new poll shows Americans give a colder shoulder to Muslims and atheists than to adherents of other creeds.

In the online survey of 2,800 U.S. adults, 32 percent of respondents said they would be less likely to support candidates for political office who follow Islam or do not believe in a god or gods. Americans polled Nov. 16-19 were most likely to be supportive of Christian or Jewish candidates. 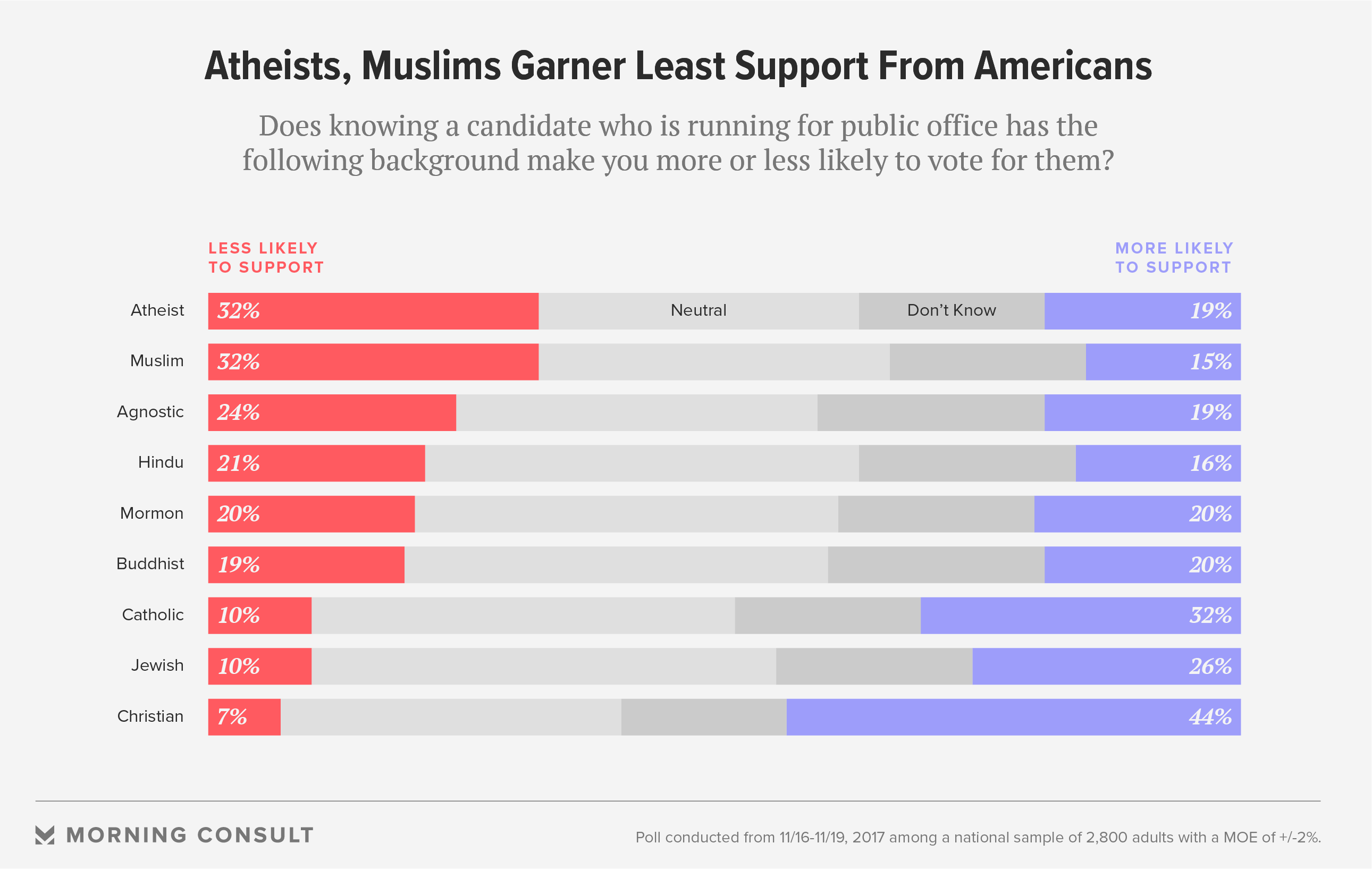 That level of opposition to Muslim candidates reflects public perceptions of Islam, according to some experts.

“I think it’s a real indicator of how Muslims have been denigrated in the American mind,” said David Gibson, the director of Fordham University’s Center on Religion and Culture, in a Dec. 1 interview. “There’s been so much anti-Islamic talk over the years, and especially now, that continues to have an effect.”

During his 2016 campaign, President Donald Trump regularly leaned on anti-Muslim rhetoric in making his pitch to the electorate, most notably calling for “a total and complete shutdown” of Muslims entering the United States. That posture has continued during his presidency; last week he re-tweeted three videos from a British far-right group purporting to show Muslims committing violent acts.

Gibson said higher support for candidates with a Judeo-Christian background shows “people still want their elected representatives, and especially their top leaders, to be men and women of faith.”

Twenty percent of adults under the age of 30 said they would oppose an atheist candidate, and 21 percent said the same of Muslim candidates, making young adults less likely than other age groups to oppose atheist or Muslim candidates.

As that tide has started to turn, some elected officials are being more open about their lack of belief in a deity or deities — although many still shy from using the term atheist.

In November, Rep. Jared Huffman, who represents a Democratic-leaning district in coastal California, came out as a “humanist” — the rejection of religion as the foundation of human morality.

Huffman says he’s been surprised by the amount of positive feedback he’s received from constituents, and expects some of his colleagues will follow suit.

“I think this will be demystified in the years ahead,” Huffman said in a Nov. 30 interview at the Capitol. “I’ve got a lot of colleagues who agree with me spiritually. I serve here with atheists, non-believers, agnostics, spiritual seekers, humanists and people of deep faith, and it covers every part of the spectrum, just like the American people themselves.”

Huffman was one of 10 members of Congress — all Democrats — who declined to state their religious affiliation at the start of the 115th Congress. That group represents about 2 percent of lawmakers on Capitol Hill, even though 23 percent of U.S. adults describe themselves as unaffiliated.

Congress remains overwhelmingly Christian: Almost 91 percent of its members identify as such, according to Pew, compared with approximately 71 percent of American adults. The share of the electorate that is unaffiliated is smaller than that. CNN exit poll data from the 2016 presidential election showed 15 percent of voters had no religious affiliation, in contrast to 75 percent of the electorate who identified as Christian.

Trump’s anti-Muslim rhetoric could still be effective in certain parts of the country, but it’s likely to lose some of its punch as millennials overtake Baby Boomers as the biggest share of the electorate, according to Daniel Cox, director of research at the Public Religion Research Institute.

It's going to be apparent fairly quickly that the political utility of using anti-Muslim rhetoric and anti-atheist rhetoric will hit diminishing returns relatively quickly -- if not 2018, then I think 2020.

“It’s going to be apparent fairly quickly that the political utility of using anti-Muslim rhetoric and anti-atheist rhetoric will hit diminishing returns relatively quickly — if not 2018, then I think 2020,” Cox said in a Dec. 1 interview.

The gap in congressional representation is smaller among Muslims; about 1 percent of U.S. adults identify as Muslim, and there are two adherents of Islam serving in Congress: Democratic Reps. Keith Ellison of Minnesota and André Carson of Indiana, who were elected in 2006 and 2008, respectively.

The 2018 midterm elections will provide further test cases for the viability of Muslim and secular candidacies.

Rep. Kyrsten Sinema (D-Ariz.) is running to replace retiring Sen. Jeff Flake (R) next year. She describes herself as religiously unaffiliated and was the first sitting congressional lawmaker to make that distinction, in 2013 — though her office said she rejects the label “atheist,” declining to comment further. An avowed atheist has served in Congress before: former Democratic Rep. Pete Stark of California, who lost re-election in 2012, announced he was atheist in 2007.

There are no current members of Congress or candidates for national office who describe themselves as atheist.

Gibson said the elected and aspiring officials who shy away from embracing the atheist label are largely influenced by the backlash to “very in-your-face, anti-religious atheists” such as scientist and author Richard Dawkins.

“The brand is very much skunked by these crusader atheists who are out there and have a very anti-religious bias to them,” he said. “So it’s no surprise that a candidate for public office would want to call themselves by any other name.”

For the 116th Congress, Carson and Ellison could be joined by pediatrician Nadia Hashimi, who is running to replace retiring Rep. John Delaney (D) in Maryland’s largely blue-collar 6th District. Two Muslims will also be running for statewide office next year: Asif Mahmood is a Democratic lieutenant governor candidate in California and Abdul El-Sayed (D) is running for governor in Michigan.

In a brief interview at the Capitol, Carson said recruiting more adherents of the Muslim faith to run for office helps demystify the religion and eliminate negative stereotypes.

“The majority of Muslims who are of goodwill and who represent the religions quite well, their voices aren’t heard,” he said on Nov. 30. “Part of my entire project has been about going across the country, increasing awareness, encouraging Muslims to get involved in the political process.”