Following a caught-on-camera health scare for Hillary Clinton over the weekend, a new Morning Consult survey reveals widespread concerns about her health among registered voters.

The poll, taken Sept. 12 through Sept. 13, shows that eight in 10 (79 percent) said they have heard a lot or some about Clinton’s health concerns.

It’s a high figure. For comparison, at its height, roughly nine in 10 said they had heard a lot or some about Clinton’s use of a private email server while serving as the country’s top diplomat.

Opinions on the former secretary of State’s health have already begun to shift since last month. Today, a little more than two in 10 (22 percent) say Clinton’s health is above average or excellent, down from 29 percent from a late August national survey. Additionally, 41 percent now say it is below average or very poor, compared to only 26 percent who said that in August. A plurality, 28 percent, rank her health as average (compared with 30 percent last month).

Related: How Opinions on Hillary Clinton’s Health Have Changed Since Pneumonia Diagnosis

There are large partisan differences when it comes to opinions on the Democratic nominee’s health. For example, seven in 10 (68 percent) Republicans said Clinton’s health was below average or very poor, compared with 16 percent of Democrats.

Yet, views on Donald Trump’s health have hardly changed  – 36 percent today say it’s above average or excellent compared to 33 percent in late August, despite a questionable physician’s note boasting about his health and his documented bragging about unhealthy eating.

Less than half (44 percent) of voters said Clinton’s health will negatively impact her ability to serve, including 23 percent of Democrats, 44 percent of independents, and 69 percent of Republicans.

But the recent incident has done little to change minds about Clinton’s trustworthiness. Fifty percent of respondents said Clinton has given false information about her health to the public; just 37 percent said the same for Trump. 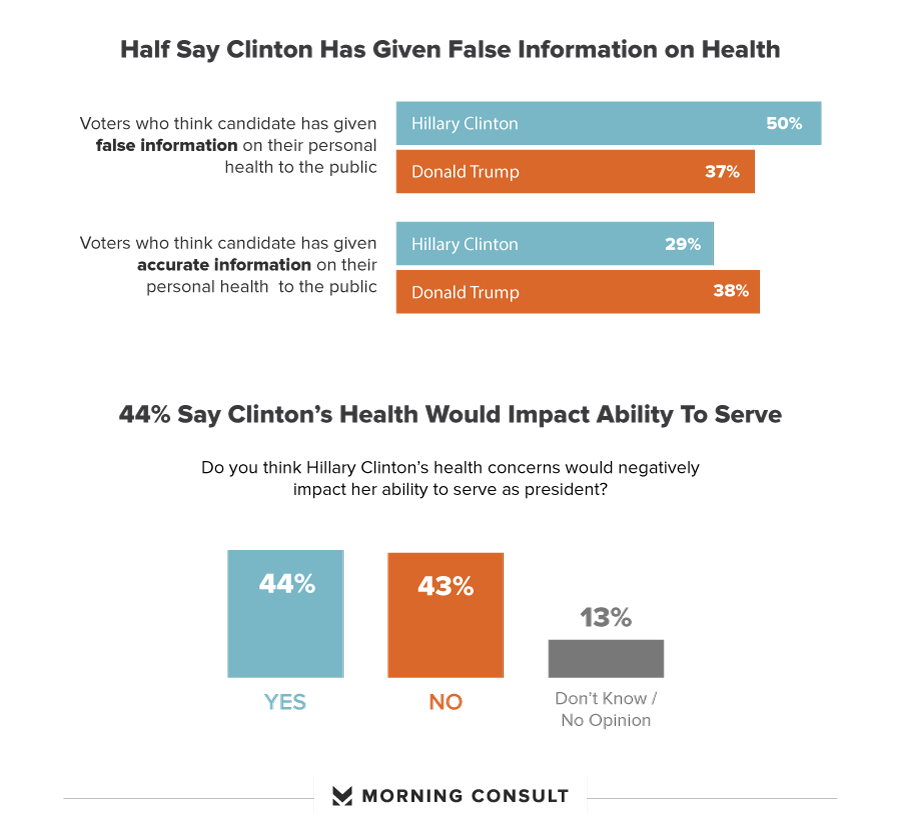 But, voters are looking for more transparency from both candidates.

The good news for both candidates: Voters think each would survive first term. Eight in 10 said it is very likely or somewhat likely Trump will survive his first term, if elected, compared with seven in 10 who said the same for Clinton.

In the event that neither candidates would be able to complete their terms, Republican vice presidential candidate Mike Pence is viewed as more capable than Clinton’s running mate, Tim Kaine. Forty-three percent say Pence is prepared to serve as president, while 38 percent said the same of Kaine.

The national Morning Consult survey polled 1,501 registered voters from Sept. 12-13 for a margin of error of plus or minus 3 percentage points. See the toplines and crosstabs.