President Donald Trump has more than 33 million followers on his personal Twitter account, but most of the voters who cast their ballot for him in 2016 aren’t holding their breath for his next tweet.

In contrast, 62 percent of Trump’s voters don’t follow his tweets closely, in line with the 65 percent of registered voters overall who said the same. Poll respondents were more divided on news coverage about what Trump tweets, with 49 percent of voters saying they read or watch those kinds of reports and 47 percent saying they don’t.

Americans consider information coming from news organizations to be more credible than what Trump says. Sixty-three percent of registered voters said they consider information from PBS credible, and 62 percent said the same about ABC News, CBS News and The Wall Street Journal. 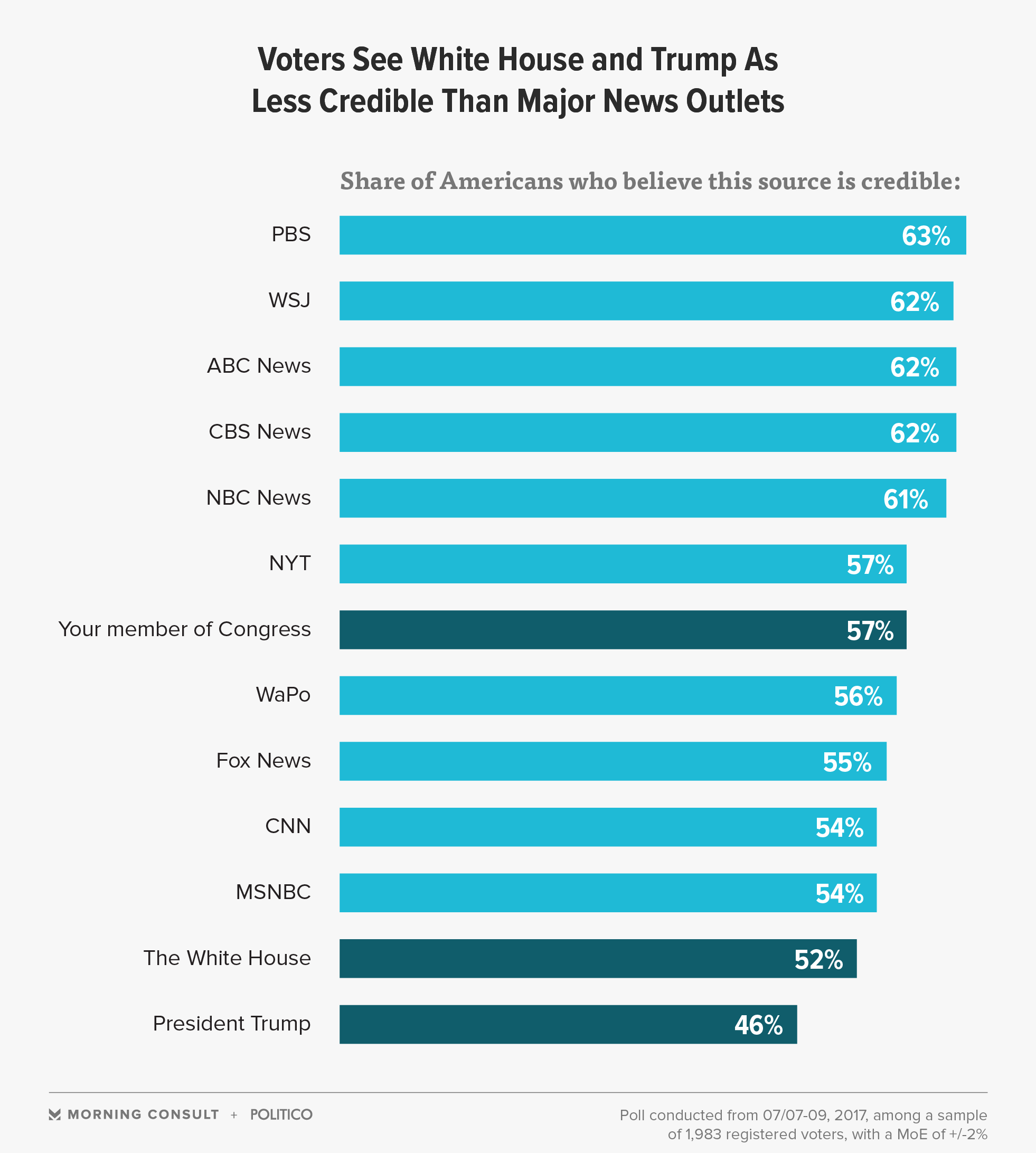 More than half of voters said cable news organizations such as MSNBC, CNN and Fox News are credible, but opinions were divided along partisan lines. For example, 78 percent of registered Democrats find CNN credible, while 34 percent of Republicans said the same.

The public’s perception of CNN has declined since Trump was elected. The network recently retracted a story linking Trump officials to Russia, and three employees resigned as a result. Days later, Trump offered an extreme depiction of his perceived rivalry with “fake news,” tweeting an edited clip of a former World Wrestling Entertainment Inc. appearance where his opponent sported the CNN logo for a head.

Fifty-four percent of U.S. adults said they have a favorable view of CNN, as of July 12, marking a 6-point drop from a high on May 17, according to Morning Consult Brand Intelligence data.

The network’s credibility also slipped over the last month in Morning Consult polling of U.S. adults, though a majority of Americans still considers it credible. A poll conducted last month showed 56 percent of adults consider CNN a credible news source, down from 60 percent in May and 63 percent in April. In December, 60 percent of voters said CNN is credible.

CNN representatives did not respond to requests for comment.

Heidi Tworek, a University of British Columbia professor whose focus includes news and media, said CNN may be “trying to straddle that middle ground” in a political climate so divisive even “basic facts about reality are being disputed.” This can result in a network’s struggle to appear unbiased when panelists are too polarized to have a meaningful conversation, she said in an interview Monday.