Despite 2012 controversy over views on same-sex marriage, company ranks highly among millennials

Forty-nine percent of U.S. adults said Chick-fil-A has a positive influence on their community, while 7 percent said the chain has a negative one, putting it above restaurants such as Arby’s Restaurant Group Inc. and Yum! Brands Inc.’s KFC — despite the controversy surrounding Chick-fil-A just a few years ago.

Chick-fil-A’s public image was hit in 2012 after CEO Dan Cathy said he was opposed to same-sex marriage and as reports surfaced that the company donated to anti-gay charities, sparking protests. Cathy is a conservative Christian, as was his father, Chick-fil-A founder S. Truett Cathy.

Nearly half of the public (48 percent) supported same-sex marriage at the time, including 64 percent of millennials, according to polling from the Pew Research Center.

Related: The Surprising Impact of Your Neighborhood Dollar Store

And yet millennials are less likely to view Chick-fil-A’s community influence negatively compared to McDonald’s and other fast-food chains.

Chick-fil-A also ranks particularly high in the South, where the share of Americans supporting gay marriage is lower, though a majority still support it. Fifty-eight percent of Southern residents favor legalized same-sex marriage, according to an August survey from research organization PRRI, compared to 66 percent of U.S. adults overall. 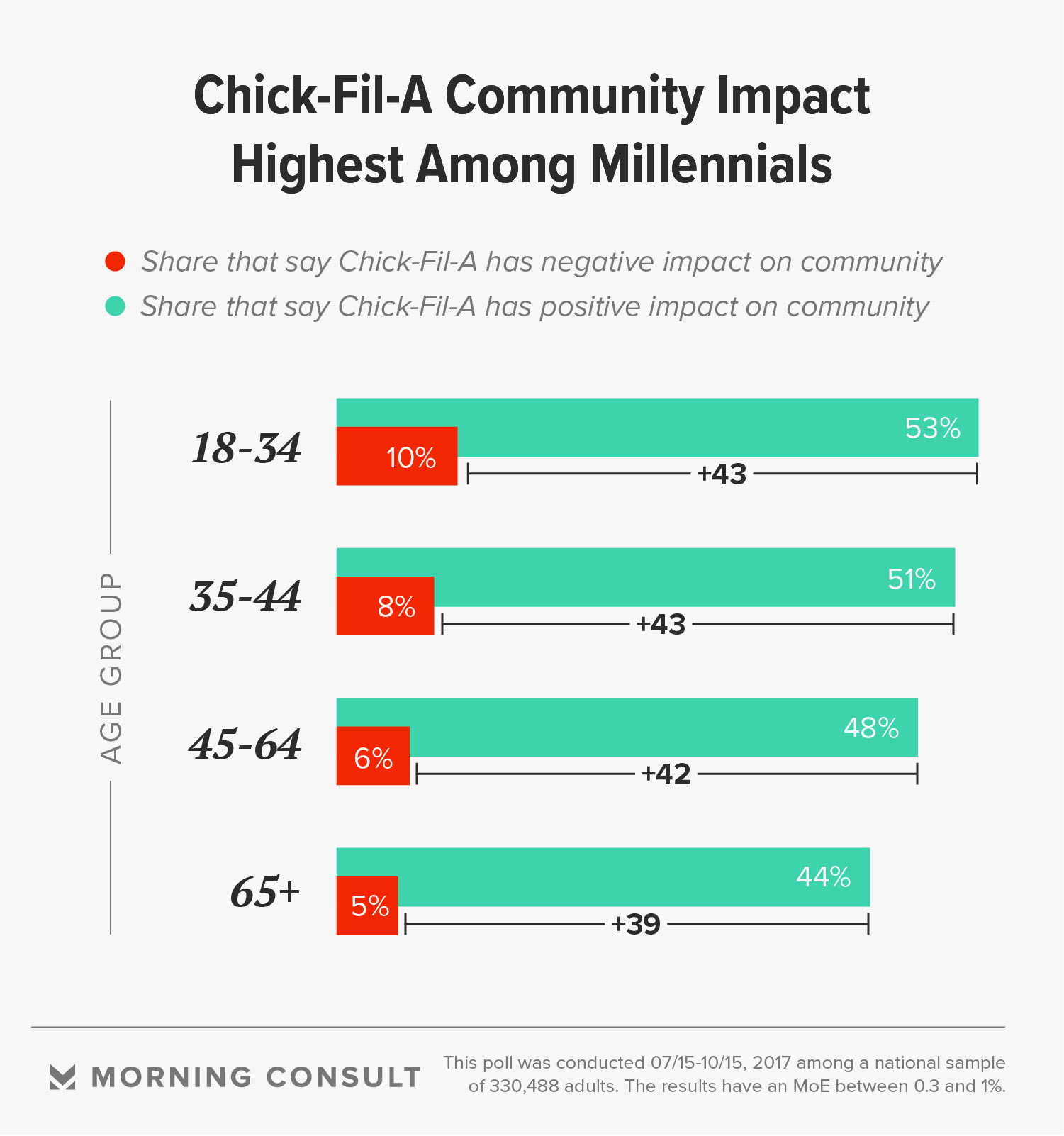 “What’s interesting about the paradox of Chick-fil-A is that, in many ways, it’s probably one of the most socially advanced companies in terms of treatment of employees and its role in the community,” Thomas Ordahl, chief strategy officer of the brand consulting firm Landor, said in an interview Nov. 13. “And yet its founder has a position that is quite dissonant with most people in the U.S.”

Ordahl believes Chick-fil-A consumers are able to separate their sentiments on social issues from where they spend their money. And beyond the 2012 controversy, Chick-fil-A is an organization with an extremely good reputation, Ordahl said — much of that tied to its internal policies.

“The strongest part of their brand is how they treat employees,” he said. This includes providing opportunities for education scholarships for the roughly 120,000 people employed at individually owned restaurants.

Chick-fil-A has been providing scholarships to its employees for 40 years, and this year nearly doubled its projected giving from $4.9 million to $8.8 million, the company said.

Perceptions of community impact could also be credited to Chick-fil-A’s external charitable giving, which has shifted since the 2012 same-sex marriage controversy. That year, the chain started the Chick-fil-A Foundation, which has the broad focus of helping children succeed.

Rodney Bullard, executive director of the Chick-fil-A Foundation, spoke at a conference at the U.S. Chamber of Commerce Foundation last week about one program: The Westside Future Fund, a nonprofit aimed at revitalizing Atlanta’s Westside neighborhood.

When asked about Cathy’s remarks in a Nov. 15 interview, Bullard said Chick-fil-A has never had a policy against the LGBT community.

“In our research, we’ve seen that these attributes often matter more to millennials than to older consumers, especially compared to other benefits like low prices or familiar flavors,” Marion said in an interview on Nov. 9. The Hartman Group researches the food and beverage industry.

The community impact rankings of Chick-fil-A, which operates more than 2,200 restaurants, stand out in six states in particular. Residents in Alabama, Georgia, North Carolina, South Carolina, Texas and Virginia rank its community impact more positively than the national average.

The Standout Brand in Each State

Combined, the locations in those six states make up nearly half of Chick-fil-A’s restaurants nationwide. The restaurant’s net community impact is higher among Southern residents (59 percent) than among residents in the Northeast (29 percent), West (31 percent), and Midwest (34 percent).

And such positive sentiment feeds into the company’s bottom line: A 2017 report from QSR, a business-to-business magazine for the quick-service restaurant industry, shows the company generates the most sales revenue per restaurant, beating out fast-food competitors like McDonald’s and fast-casual restaurants such as Chipotle.