More political intelligence:
This page is no longer being updated. Learn how to get access to this data HERE. 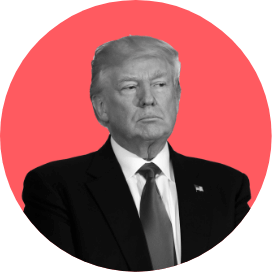 Use the slider to track how Trump’s net approval has shifted over time.

Select a state to view the trend data.

A breakdown of which demographic groups are more or less likely to approve of Trump. Each of the below groups are sub-demographics among potential GOP primary voters:

On a daily basis, Morning Consult surveys over 5,000 registered voters across the United States. Along with 2020 presidential election data, Political Intelligence tracks the approval ratings for all governors, senators, House members, the president and more at the national, state and congressional district level.

About the state-level data:

Morning Consult conducted more than 4 million surveys with registered U.S. voters from January 20, 2017, through February 29, 2020, to determine the approval ratings for President Donald Trump in each of the 50 states and Washington, D.C., for each month. These results use a statistical technique called multilevel regression with post-stratification (MRP) to estimate state-level public opinion from the national survey data for a specific month.

Standard errors for our estimates for each state were calculated by taking 50 bootstrap samples with replacement from our full national dataset for each hypothetical matchup and then assessing this empirical distribution at the state level. The distribution of these predictions at the state level allows us to construct a predictive interval, which gives us a sense of the spread of MRP estimates. The 95 percent predictive intervals range from 1 percentage point in larger states such as California, Florida, New York, Pennsylvania and Texas, to 4 points in states with sparser populations such as Alaska.

The margin of error in each state for the last month is available here.

About the demographic approval data:

The “Trump’s Approval With GOP Primary Voters” section has a different methodology than the above sections. This section is reported based on 61,609 interviews with registered voters who indicated they may vote in the Republican primary or caucus in their state. The interviews were collected from Feb. 1-29, 2020, and have a margin of error of plus or minus 1 point. Each demographic group listed is based on at least 3,031 interviews over that same time frame. The margin of error for each group is either plus or minus 1 or 2 points.

Download the Latest 2020 Political Intelligence Report
Featuring insights on Trump's standing as well as the state of the Democratic primary. Sign-up to always get this data first: