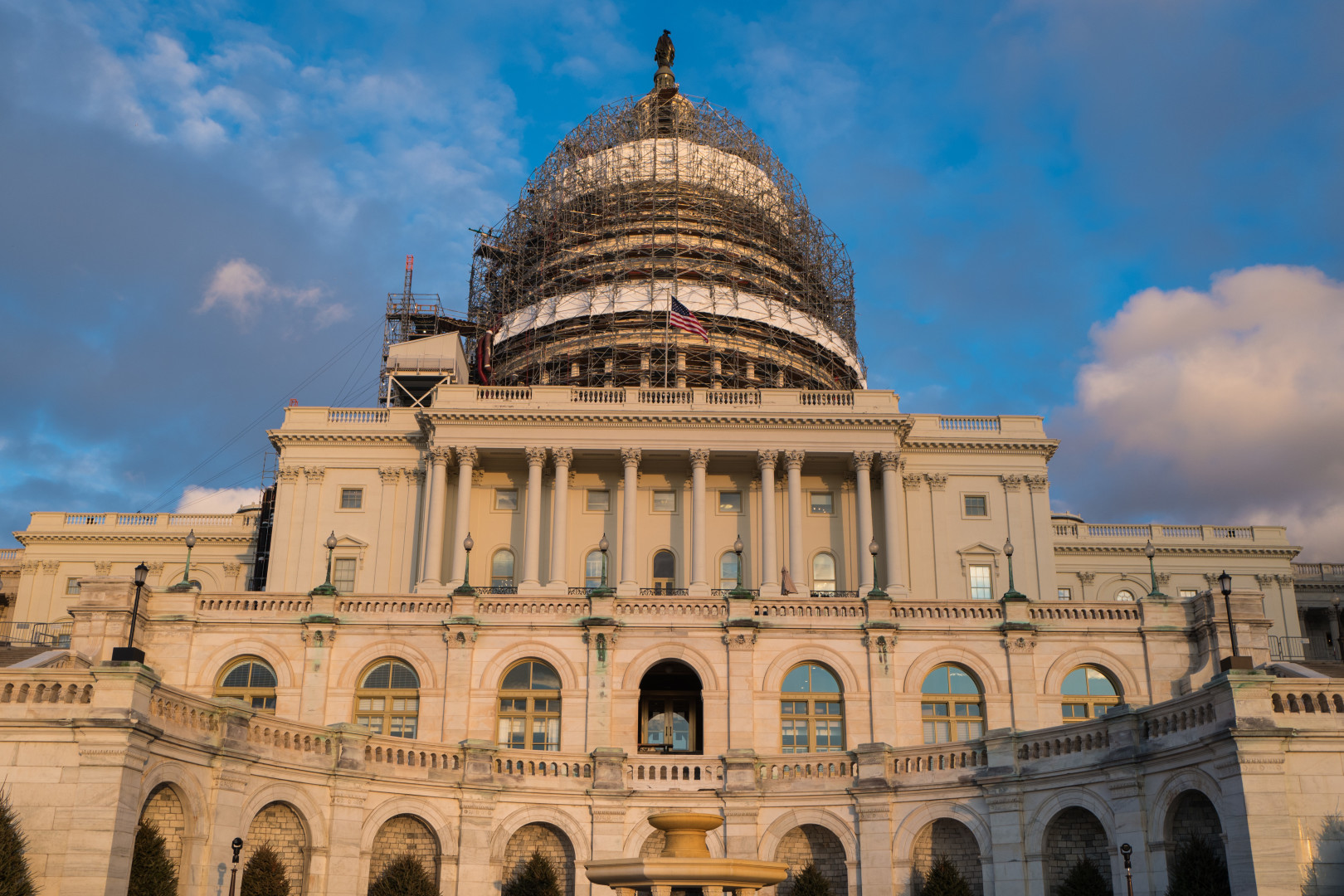 The drawn-out Democratic presidential contest could come to an end on Tuesday, when voters go to the polls in California, Montana, New Mexico, New Jersey and South Dakota. California will be a nail-biter. Public opinion polling shows front-runner Hillary Clinton neck and neck with her challenger, Vermont independent Sen. Bernie Sanders, in a state with a massive delegate count.

Voters in the above states, as well as North Carolina and Iowa, will also vote in competitive down-ballot contests. There are a number of open or highly contested House primaries in California, such as the 24th district, which has four Democrats vying for a seat being vacated by Rep. Lois Capps (D). After some redistricting in North Carolina, Rep. Renee Ellmers (R) is facing fellow Republican lawmaker Rep. George Holding in what has been the political fight of her life.

Meanwhile House Speaker Paul Ryan faces two dilemmas as Congress comes back in session after a Memorial Day break. One problem is immediate. The other could fester well into next year if Donald Trump is elected president.

In the short term, the Wisconsin Republican wants to get the regular congressional appropriations process rolling again after it was derailed over an energy and water spending bill before the recess. Using an open amendment process, Democrats managed to get a pro-LGBT amendment adopted on the floor, which caused Republicans to vote down the spending measure.

The longer-term issue involves the rollout of the House GOP’s “Confident America” agenda, detailing Ryan’s policy proposals for 2017 should the White House fall into Republican hands. On Tuesday, Ryan will release a policy paper on poverty, and on Thursday, the subject shifts to national security. There are several others in the works.

The looming question there is whether Trump, the GOP nominee, will go along with Ryan’s plan. The unpredictable real estate mogul has not yet said whether he will go along with it. Ryan has said he is confident Trump will embrace the agenda, and his recent endorsement of Trump could help.

“I feel confident he would help us turn the ideas in this agenda into laws to help improve people’s lives,” Ryan said in his op-ed stating his support for Trump.

Lawmakers return from the Memorial Day break with little time left for Congress to pass legislation to keep Puerto Rico from defaulting on a $2 billion payment due on July 1.

A floor vote is expected later in the week on a bill that would give Puerto Rico the tools to restructure its debt. The bill has substantial support in the House, but there is opposition from some Democrats, including from Rep. Luis Gutiérrez (D-Ill.), Sen. Bob Menendez (D-N.J.) and Democratic presidential candidate Sen. Bernie Sanders (I-Vt.).

Meanwhile, House Republicans will huddle to discuss ways to get the stalled appropriations process rolling again. Ryan has proposed changing the the open amendment rules regarding spending bills to make it more difficult for lawmakers to offer them unexpectedly. House Appropriations Committee Chairman Hal Rogers (R-Ky.) has even raised the possibility of completely ending the open amendment process.

That strategy could backfire. Democrats would no doubt point out that such a move is at odds with Ryan’s pledge to return the House to “regular order.” If they find allies on the Republican side, it could derail the process further.

Across the Capitol, the Senate will resume consideration of the annual defense policy bill, where a standoff is looming over a provision that would require women to register for selective service. Conservative opponents to the provision, led by Sen. Mike Lee (R-Utah), filed an amendment to nix the provision. Requiring women to register for the draft is supported by some top Republicans, such as Senate Majority Leader Mitch McConnell of Kentucky and Senate Armed Services Committee Chairman John McCain of Arizona.

The Senate and House also are expected to convene a conference committee in the near future to reconcile spending bills that include funds to combat the Zika virus. There is much to reconcile between the House and Senate bills. The Senate bill provides $1.1 billion in emergency funds for Zika, while the House measure reroutes $622 million from other programs.

The chambers are also expected to go into conference to hash out a compromise bill to address opioid abuse. The House has appointed conferees on both measures, but the Senate has not.

The House’s forthcoming vote on the Puerto Rico bill will determine whether its relatively smooth passage in committee before Memorial Day will carry over to the entire chamber. If it passes without significant changes, the pressure will increase on the Senate to take up the carefully negotiated bill and send it to the White House before the end of the month.

So far, a few Senate liberals are causing a ruckus about the Puerto Rico measure. Sanders opposes the composition of a fiscal oversight board in the bill and is urging Senate Democrats to rally behind an alternative solution. He wants the Federal Reserve to come to the rescue of the island using its authority to give aid to entities outside the banking system in “unusual and exigent circumstances.” Sanders will introduce legislation on the matter in the coming week, which would give authority for the Fed to facilitate “an orderly restructuring of Puerto Rico’s debt,” according to a summary of the bill.

Sen. Robert Menendez (D-N.J) has said Sanders should get behind his alternate Puerto Rico legislation that would allow the commonwealth to declare bankruptcy. That proposal is supported by progressive Sens. Elizabeth Warren (D-Mass.) and Sherrod Brown (D-Ohio).

Meanwhile, House Financial Services Committee Chairman Jeb Hensarling (R-Texas) will roll out his plan to repeal and replace the Dodd-Frank banking law on Tuesday at the Economic Club of New York. At the end of last year, Hensarling suggested he would attempt a broad overhaul of the 2010 law as opposed to pushing bills that make smaller changes.

The Senate Appropriations Committee is slated to vote on the Labor, Health and Human Services, Education and Related Agencies Appropriations Act, in subcommittee on Tuesday and in full committee on Thursday. The panel meetings will offer the first clue as to whether Republicans will try to put controversial riders onto the spending bill to roll back the administration’s recent rule on overtime pay or its new standard for investment advisers. Both are highly unpopular with Republicans and the business community.

On Tuesday, the Senate Banking Committee will hold a hearing on bank capital and liquidity regulation.

On Wednesday, the House Financial Services Committee will hold a hearing on terrorism financing from South America.

The House is preparing to dip into controversial waters with a floor vote on the Ozone Standards Implementation Act, which is slated for a House Rules Committee meeting on Monday afternoon. The bill would delay some Environmental Protection Agency mandates on ozone standards and allows some corporations to apply for permits to break the usual federal standards.

The House is also slated to vote on two Republican resolutions disapproving of a carbon tax and of President Obama’s proposed $10.25-per-barrel oil tax. The Rules Committee is also set to meet Tuesday on that legislation

Business and environmental interests are unsurprisingly split on the bill. The U.S. Chamber of Commerce and other industry groups sent a letter to lawmakers in April criticizing the EPA’s new ozone standards, saying this bill creates a more reasonable schedule for implementation. A collection of environmental advocacy groups, meanwhile, sent a letter to lawmakers calling the bill “one of the most irresponsible compilations of attacks on Clean Air Act health standards ever to be introduced in Congress.”

The Senate Environment and Public Works Committee will hold a hearing Thursday on the implications of the Supreme Court’s stay on the Clean Power Plan, featuring a Missouri state lawmaker and a Connecticut energy regulator, among others. An EPW subcommittee will also hold a hearing Tuesday on EPA’s “unfunded mandates on state, local, and tribal governments.”

A House Foreign Affairs subcommittee will hold a hearing Thursday on the effect of low oil prices on “energy security in the Americas.” The subcommittee will hear testimony from the head of the Energy Information Administration, the Energy Department’s director of energy policy and systems analysis, and the State Department’s special envoy for international energy affairs.

The Senate Appropriations Committee’s two scheduled votes on the Labor-HHS spending bill (in subcommittee and full committee) could pose partisan drama in the health arena, in addition to possible riders over Labor Department rules.

Major health questions about the measure include whether the bill will fund Obamacare and how much will be appropriated to the National Institutes of Health and the nation’s opioid epidemic. How some of these issues are handled will likely determine if the appropriations process proceeds through regular order in the Senate or falls apart.

On Tuesday, the Judiciary Committee will hold a hearing on synthetic drugs. Witnesses include Chuck Rosenberg, the acting administrator of the Drug Enforcement Administration, and Michael Botticelli, the director of the Office of National Drug Control Policy.

In the House, the Ways and Means Committee will hold a member day hearing on Medicare legislation on Wednesday.

After postponing a vote in late May, the Senate Judiciary Committee is scheduled to take up a popular measure that would update the 1986 Electronic Communications Privacy Act.

Before Memorial Day, the committee postponed consideration of the bill to address concerns from a flurry of senators, including one of its co-sponsors, Senate Majority Whip John Cornyn (R-Texas).

The bill, S. 356, would require law enforcement to get a warrant before obtaining the content of suspects’ online communications that have been stored for longer than 180 days or in a cloud service. Tech and privacy advocates have pushed for the policy change for five years, while law enforcement entities have lobbied against it because they say it could impede the ability for them to pursue criminals.

Cornyn introduced two amendments that would aim to strengthen counterterrorism operations and streamline the process of investigating a crime during emergency situations. Privacy advocates are against the two tweaks because they believe they have the potential to be abused and tread on the privacy rights of Americans.